True, I originally intended to only capture the quirky roadside animal rocks, like Frog Rock in Eastford and Turtle Rock in Marlborough, but upon seeing Elephant Rock at Flamig Farm in West Simsbury, I had to document it. 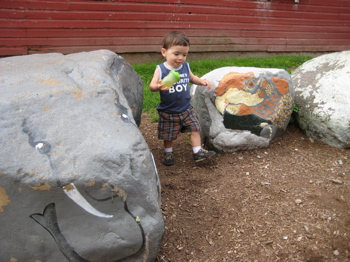 Flamig Farm is a petting zoo with all sorts of barnyard animals wallowing in filth, just waiting for my two-year-old to touch and taste said filth. (To their immense credit, wash sinks with soap were abundant.)

As we were leaving, I noticed Elephant rock and the nearby faded turtle rock (inspired, no doubt, by the real ones around CT) and an even more faded, indecipherable rock. Oh sure, I could have asked the lady who worked there what it was supposed to be… but nah, we just left. 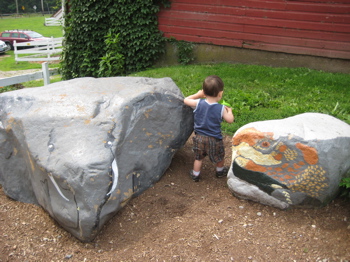