CTMQ > Everything Else > Superlatives > The Oldest Newspaper (in US)

What the Heck is a “Courant” Anyway?
The Hartford Courant, Hartford
June 9, 2009 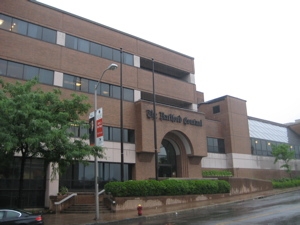 It’s no secret that the print newspaper industry is going through some trying times right now. Here in the northeast we hear about the imminent demise of such venerable goliaths as the Boston Globe and the New York Times. But in between New York and Boston sits Hartford. Ahhh, beautiful Hartford… The Hartbeat of New England.

And Hartford is home to the, repeat after me, “Oldest Continuously Published Newspaper in the United States.” For some reason, that random bit of Connecticut trivia is known by almost everyone. As someone who knows all sorts of random Connecticut trivia, it’s strange to me that this one is one of the most widely known. At any rate, it’s a cool fact and deserves some investigating.

I was poking around downtown one day and found myself on Broad Street (the downtown end of it, not the heroin part) and decided to stop in the Courant building and check things out. I had read that they had their original printing press on display and heck, I wanted to see it. 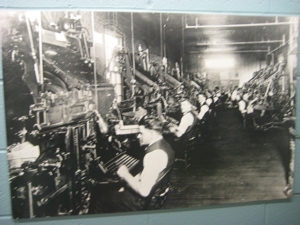 Not so fast. I entered and was greeted by a guard who asked me why I was there and who I knew. I stammered that I “knew” a few people and went with, “I know Susan…” Helpfully, the guard guy filled in her last name which I had forgotten under the stressful situation. “Campbell?”

“Yes, I know her. But don’t call her as she has no idea I’m here and that wouldn’t be cool.” Okay, first of all, this very nice guard needs a lesson in social engineering. He totally gave me an answer which would have helped me get somewhere I shouldn’t be. Anyway, I inquired about the press and was told, “Oh, it’s right behind me down the hall, but I can’t let you see it alone.” Fair enough… Several corporations no longer offer tours of their small little museum-like offerings (The Hartford, PEZ, Bridgewater Chocolate, and Smith-Worthington, America’s oldest and most prestigious saddlery company in Hartford – I’m not kidding – spring to mind). 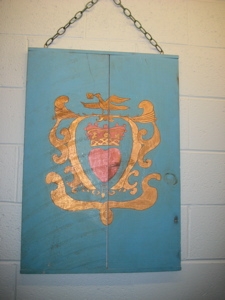 Before leaving, though, I scored a few awesome deals at the Courant employees’ book/DVD sale. I left… And plotted.

I contacted my contact, Susan Campbell, whom I HAVE actually met and would call a friend. And her book is quite excellent too. And she’s really cool. And personable. Gosh, I wonder if she’d show me the hallowed printing press yet?

Yes. We set up a time to meet and I arrived. Susan appeared, shook my hand and led me 25 feet down the hallway behind the guard station. And there it was – note, Susan admitted that no one is 100% positive that the old press in front of me is really and truly the Courant’s original press, but that it probably is and even if it’s not, it’s the same exact kind of press they used back in 1764. 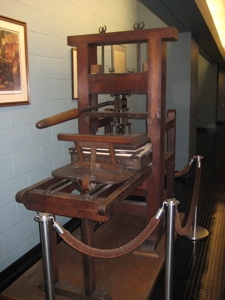 The press was “discovered” down in Wethersfield being used to make seed packets at – you guessed it – the oldest seed company in America, Comstock, Ferre & Co. (CTMQ Visit here.) And that old wooden Courant symbol sign hanging on the wall above the press? That was found and bought from an old bar in Boston.

Indeed, the Courant is “Older than the Nation” and has quite a storied history. While I read a few of the anecdotes on the wall, the massive modern printing presses stood idle behind the glass wall behind us. Susan is proud of her employer, despite the recent sale to the Tribune Corporation and the recent massive layoffs. She vows that she and her loyalists will keep this thing going no matter what. I wanted to give her a hug, or at least a fist-bump, but decided better of it.

Some history: It was started as a weekly paper in 1764 by a printer named Thomas Green. Green helped to keep The Courant afloat at first by selling clothing, stationery, hardware and spices out of a store in front of the newspaper’s office. He sold the newspaper to his assistant, Ebenezer Watson, who ran the business successfully until he died of smallpox in 1777. Then Watson’s widow, Hannah, took over the paper and became one of the first women publishers in America. 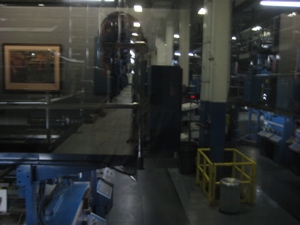 During the Revolutionary War, The Courant had the largest circulation of any newspaper in the colonies and was an influential backer of the rebel cause. The Courant’s existence was considered so important to the war effort that when its paper mill was burned down – probably by Tories – the Connecticut legislature authorized a lottery to raise money to build a new mill. In the meantime, The Courant printed a few issues on wrapping paper.

Some more facts: It’s the newspaper in which George Washington placed an ad to lease part of his Mount Vernon land. It’s where Noah Webster’s “Blue-Backed Speller” was first published. Thomas Jefferson sued this newspaper for libel – and lost. And Mark Twain tried to buy stock in this paper but his offer was turned down. 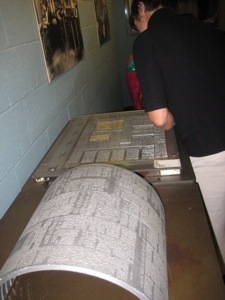 This thing became a daily paper in 1837. That’s rather amazing when you realize they were type-setting by hand back then. But it was 61 years prior to that when my favorite bit of Courant trivia occurred. Susan told me that back in the day they put the paper together in the order that information was received. So page 1 could very well have been a blurb about Old Man McGillicuddy falling down drunk again down at the docks.

And in July 1776, because of the way the paper was “edited,” the entire Declaration of Independence was published… On page 4. Eh, sounds like something Trib Corp would do today if those evil liberals came up with the Declaration.

Oh… And about the name? The word “courant” was a popular name back in the day for English-language newspapers, borrowed from the Dutch.

Courant History – from whence my facts came
Wiki History with some gibberish about an “older” paper in NH.
Time Magazine sets the record straight