Lame title, I know. Which is a shame, because Dinosaur State Park is more deserving. Several of our state parks have museums – some large and well attended, others tiny and hidden. This one is wholly unique and is often a stop on non-Nutmeggers’ visits to the state. It’s not often people equate dinosaurs with Connecticut… but here, right off of I-91 in Rocky Hill, the two go hand-in-hand. 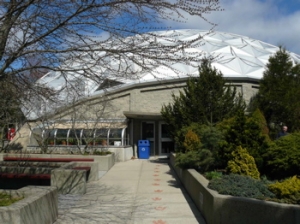 I like dinosaurs as much as the next guy, but I was never enamored with them as a child for some reason. Perhaps football and hockey had something to do with that, I don’t know. And Damian certainly hasn’t developed an affinity for them either, but that hardly stopped us from visiting the park and museum. 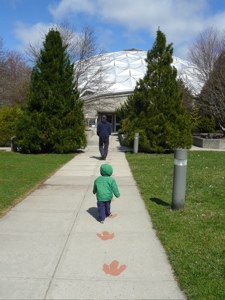 This may surprise some readers, but the Connecticut Valley has a long history of fossil track discoveries. Outstanding specimens uncovered in 19th century brownstone quarries found their way into museums throughout the world. A new chapter in the history of such discoveries was written in 1966 when dinosaur tracks were exposed in Rocky Hill. This remarkable site became Dinosaur State Park.

The park officially opened in 1968, two years after 2,000 dinosaur tracks were accidentally uncovered during an excavation for a new state building. Five hundred of the tracks are now enclosed within the Exhibit Center’s geodesic dome; the remaining 1,500 are buried for preservation. 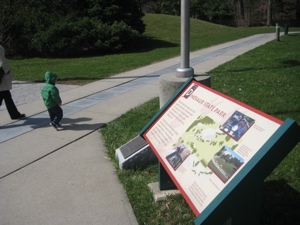 Did I say geodesic dome? Yup – a seemingly odd design for a building housing prehistoric footprints, but somehow it works. Another small oddity is that the state’s DEEP oversees this place. Okay, that may not seem odd to you, but it sort of is when one knows what other properties the DEEP manages. 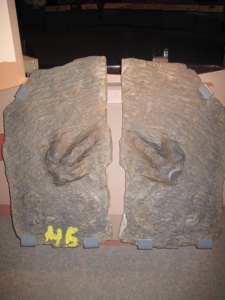 The DSP experience begins the moment you step out of your car. The long curving sidewalk to the dome has a “Walk Through Geologic Time” embedded into it. It gives a great sense of how long life has been around, how long the dinosaurs ruled the roost – and how short man’s time has been. All Damian cared about were the dino tracks painted alongside the timeline. Which was fine. 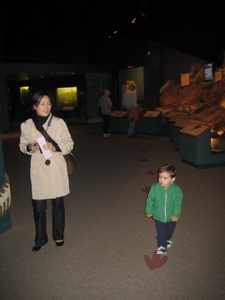 The park has done a great job planting specific conifers at the entrance, attempting to copy the plants that were around at the time of the dinosaurs. Definitely a nice touch. Off in the field to the right of the building is a chunk of exposed rock and a display explaining how the tracks were uncovered – and how there are more tracks still buried.

That was cool, but so was the crisp early April air, so we hustled inside the dome to get down to business. 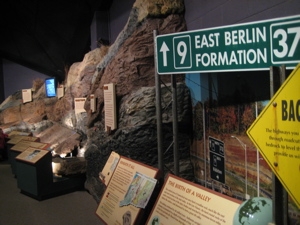 As we settle in, let’s get an overview of the dinosaurs that once roamed or state. The following is from Brendan Hanrahan’s Great Day Trips in the Connecticut Valley of the Dinosaurs. I encourage you to go here and listen to his interview with Faith Middleton from NPR. Brendan is the editor for a series of great books on Connecticut. 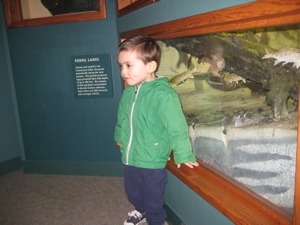 The dinosaurs of the Connecticut Valley are known from a sort of composite sketch. What is known has been learned mostly from footprints, relatively few skeletons and even fewer natural casts. The rest has been filled in by comparisons to dinosaurs that lived at about the same time elsewhere, and by more than a little bit of imagination.

Connecticut Valley fossils date from the earliest Jurassic, some 200 million years ago, and very early in the Age of Dinosaurs. “We know there were [carnivorous] theropod dinosaurs, similar to Podokesaurus and Dilophosaurus,” says Columbia University paleontologist Paul Olsen. “Podokesaurus may have made [the footprint] Grallator and Dilophosaurus may have made [the footprint] Eubrontes.”

This last bit about the Dilophosaurus and Eubrontes is what DSP is all about. You can continue reading about the other fossil finds in Connecticut at the link provided previously. Perhaps I’ll delve more into it after visiting the Peabody Museum down at Yale. 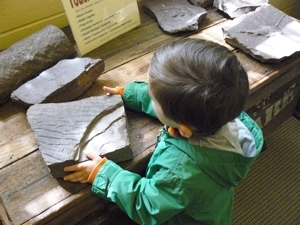 You may have noticed the strange naming convention; yes, the fossil footprints have different names than the dinosaurs that made them. In fact, the Eubrontes is the Connecticut State Fossil, as you may remember from my visit to the state legislative building. Or not. 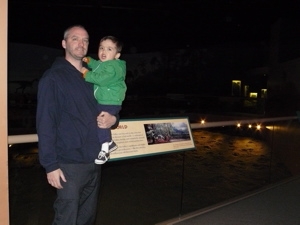 After paying, we went to the last room first – because Damian said so. Here, there were lots of activities for kids to do and many hands-on items. A large chunk of fossilized wood, some real fossils to handle, lots of coloring activities and the like. We hustled Damian along, as we knew we’d be passing through here again after viewing the exhibit.

Once under the dome, we were transported to another world. Not exactly Jurassic Park, but a reasonably impressive facsimile. The exhibit is laid out in a really cool way – a walkway takes visitors around the dome, past lots of geology, paleontology and biology exhibits all the while circling the reason we were there. 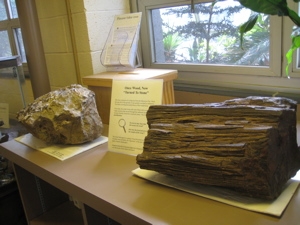 The dome was built directly over the real dinosaur tracks! I don’t know what I was expecting, but it wasn’t that. There they were, right where the construction workers found them 40 years ago, plain as day. I was impressed to say the least. 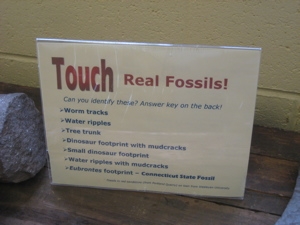 The construction project unearthed the prints in late August 1966 and for several days, the workers chiseled out prints for themselves. Amateurs arrived and began digging like mad – until the state stepped in 5 days later and shut it all down. It only took ONE month for the Governor (John Dempsey) to declare the site a state park and approved funding for the dome over the tracks. 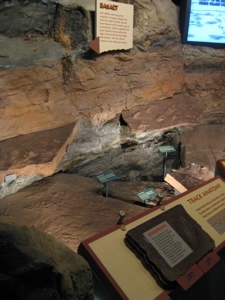 The major trackway was fully exposed and the protected from winter and more excavations were done over the course of 1967. Then, in 1968 an air-filled dome was erected and the site became a state park. It wasn’t until 1977 that the current dome was built and not until 1985 that the exhibits I was enjoying were opened to the public.

Kudos on protecting the site so quickly, Connecticut. But 20 years to make it a welcome place for family visits? Ah, politics. 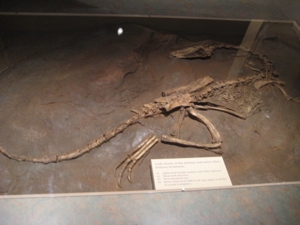 There are plenty of displays about local geology (which I’ve often discussed in my hiking exploits) and other nearby fossil finds. No actual fossil bones have been discovered around here, only tracks. The climate and geology of the area just didn’t support bone fossilization – a rather rare event to be sure. 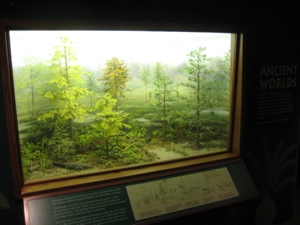 But DSP does have some casts of actual dinosaur skeletons, including a full Coelophysis from New Mexico – which was a small 200 million year old meat-eater, similar to one of the dinos who made tracks (the Grallator ones) here.

We learned about fossil pollen, fish, plants and insects. At this point, Damian had completed the loop about three times, but was generally being well-behaved. But poor Hoang wasn’t getting much of an opportunity to learn about this stuff. 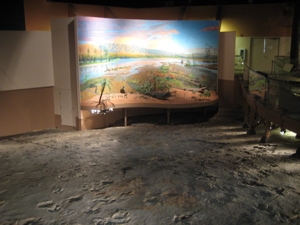 On to the star of the show: The trackway. Containing hundreds of three-toed footprints, the inch thick layer of sandstone is bathed in a yellowish light. I was treated to a talk by a park employee who was able to walk among the prints and point out interesting little tidbits on the slab. I really, really dug it. 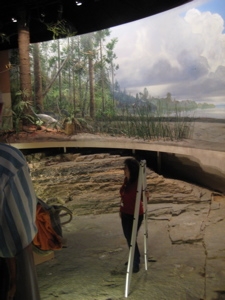 Again, to clarify, no bones have ever been found here. The fossil tracks are named Eubrontes and they are believed to have been made by a small meat-eater similar to the Dilophosaurus, whose tracks are found at the same strata, but out in northern Arizona. Their tracks bear the closest resemblance to our Rocky Hill tracks. This confusion hardly diminishes from the experience, however. 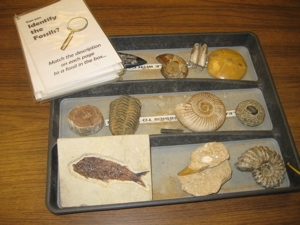 An experience that came to an end once the talk was over. I found Damian and Hoang in the activity room, coloring some dinosaurs and identifying some fossils. He really seemed to be enjoying his time there, so I didn’t interrupt. 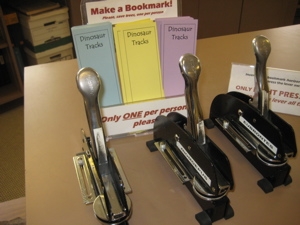 After a while, however, it was time to walk outside and check out what else the park had to offer. I mentioned the arboretum – techinically called a pinetum as it is all coniferous – which was only planted in the late 80’s as a cool example of the plants that have descended from those present during dino days.

Our goal is to grow representatives of as many of the Mesozoic Era plants families as we can on our zone 6 site. The initial plantings established a “backbone” of hardy conifers and then the collection was filled out with dwarf and slow-growing conifer cultivars. Currently, there are more than 200 different kinds of conifers in the collection. Recent plantings have focused on trees and shrubs from the Cretaceous angiosperm families. The largest gera collections are pine, juniper, charmaecyparis, arborvitae, and magnolia. 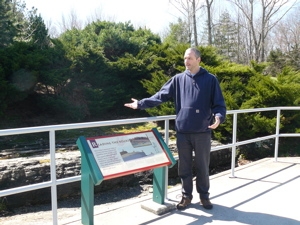 This is doubly annoying to me because I revisited the outdoor portion of the park with Damian in early August. In April, as you can see, nothing was green yet and a bunch of the gardens were nothing more than dirt patches. It is interesting to compare the two seasons via my pictures though. 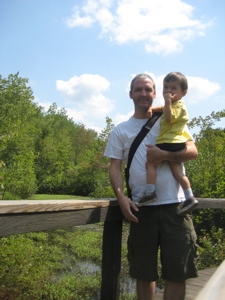 There are a few very nice and shaded picnic groves and a cool “track casting” area which is only open from May to October. There’s also a sluiceway operating in the warmer months that Damian thoroughly enjoyed on our second visit. 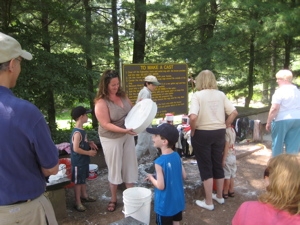 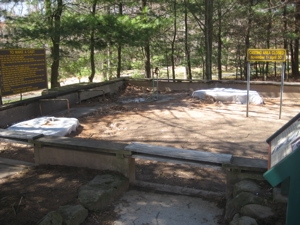 The butterfly garden and native plant garden were beautiful in August, but we hiked most of the trails in April. The trails are especially interesting here with interpretive signs along the way offering a taste of what life was like here millions of years ago. 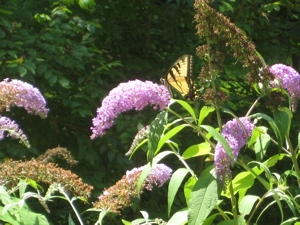 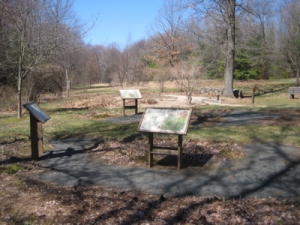 The best part is the long boardwalk through a red maple swamp; this was actually much better in April than August as there were no bugs then! Also in April, I was able to grab a garter snake for Damian to play with. (No such luck in August.) There are maybe a couple miles of trails here, traipsing through a variety of terrain. 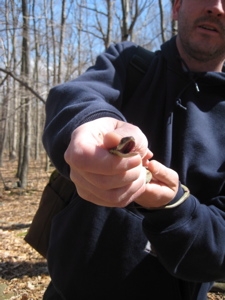 They are very well maintained and a couple even are laid with gravel for long stretches.

We had a great time here; it’s educational enough for dad nerds like me, has enough hands-on fun stuff for kids like Damian, and is designed well enough for Hoang’s fancified tastes. 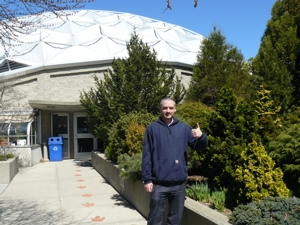