Although I’m writing this page in 2021, it has a distinction that is important to… a few people. (I was going to write “absolutely no one” but then I remembered that way back when it was originally published, the Simsbury Land Trust reached out to me to say thanks and thus began decades-long mutual appreciation for each other.) 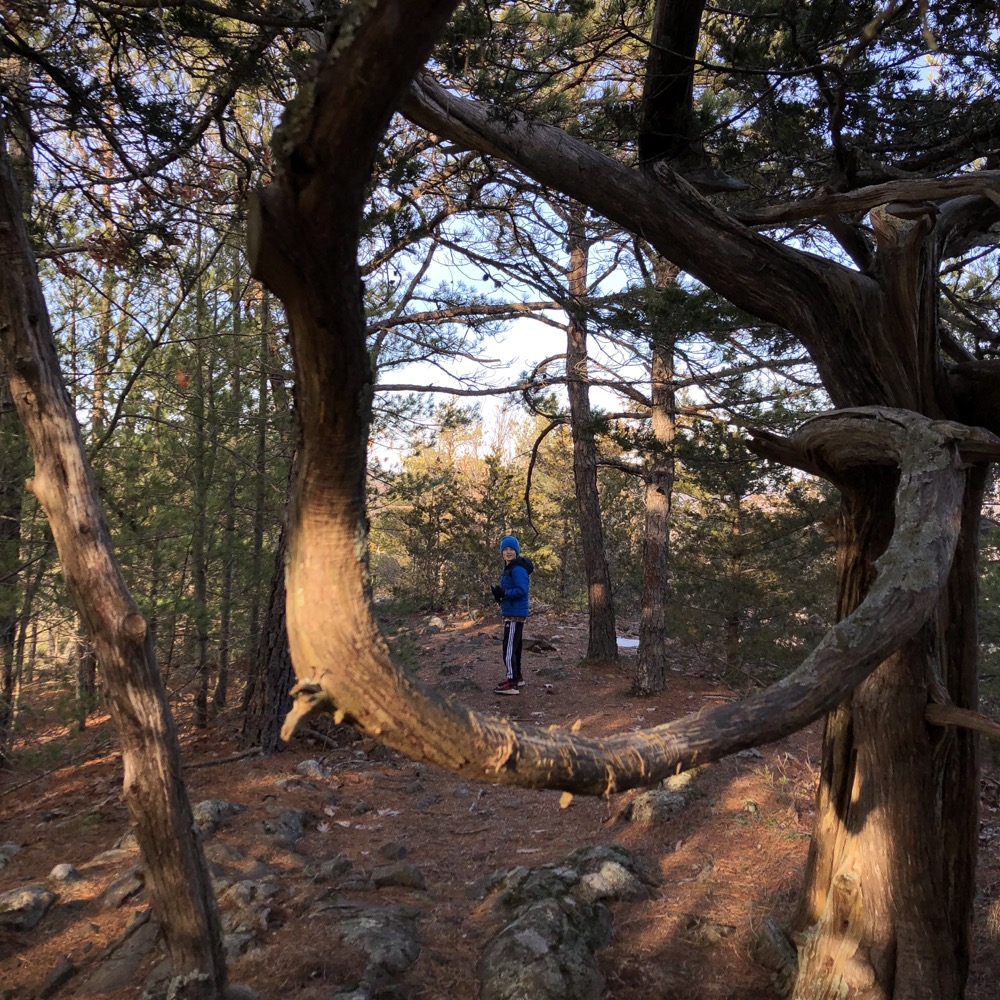 You see, back when I began this whole CTMQ thing and decided to document hikes around Connecticut, I was solely focusing on the CFPA’s blue-blazed trail network. In 2008, as I was completing the trails at McLean Game Refuge from that list, I hiked through this property in order to get to that one. I didn’t know it at the time, but that afternoon completely changed the way I did things on CTMQ going forward.

“Oh hey, this ‘land trust’ property features some impressive overlooks. And a sweet waterfall. And it seems like there are some other nice trails here.” Upon Googling and learning more about the SLT and all the properties with trails they owned and managed, I poked around some more. Holy cow, there are a hundred other land trusts with nice trails and properties! I am not exaggerating when I say that this place with its view of the Farmington Valley from the West Mountain Red Trail in the Cathles parcel completely changed the way I approached building this website. 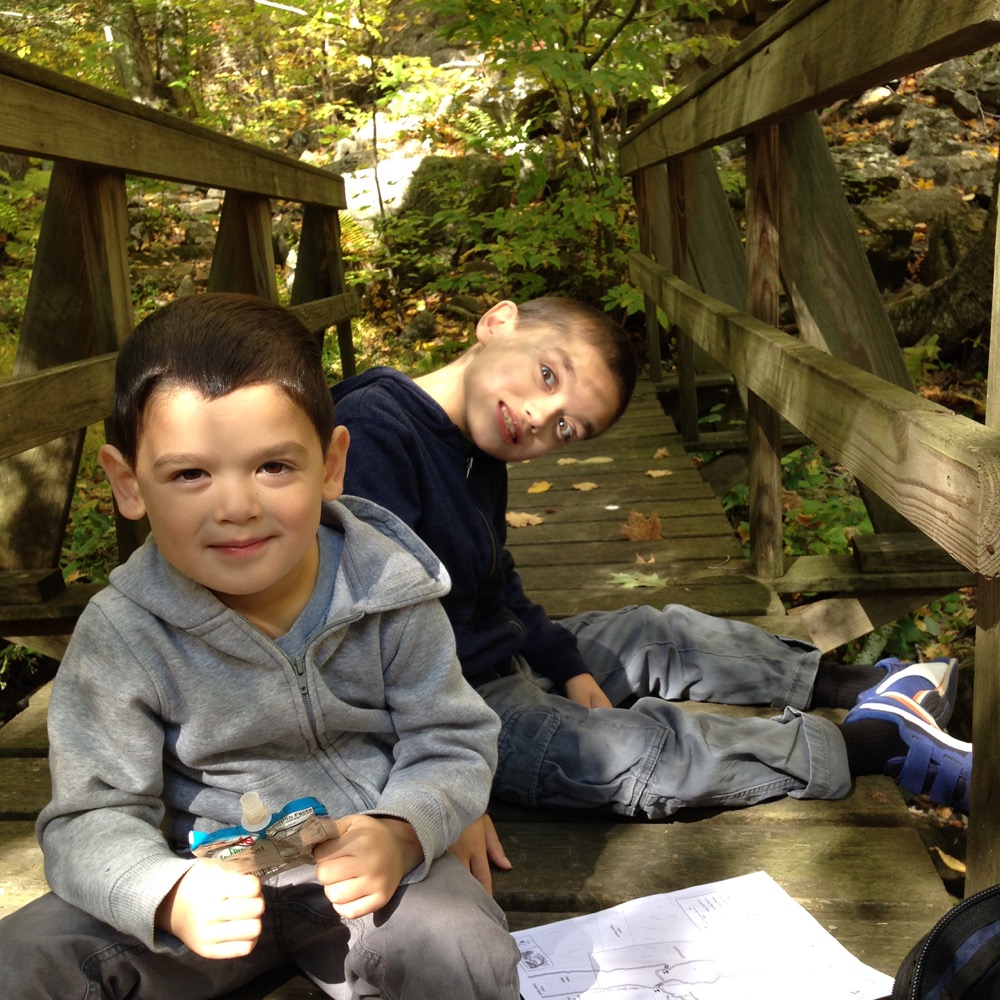 From an earlier hike here with the boys

I revisited over the years and wrote often of the weird McLean Refuge rules about how no trails can connect to their trails, since this is the very hike that would make perfect sense to do exactly that. (Pro Tip: You can easily do exactly that.) I took the boys to see the Cathles Falls one beautiful fall day in 2015, which you can do with a short hike up from the North Saddle Ridge Drive trailhead.

But I’d never connected all the pieces into one cohesive hike until late December 2020 with Calvin. 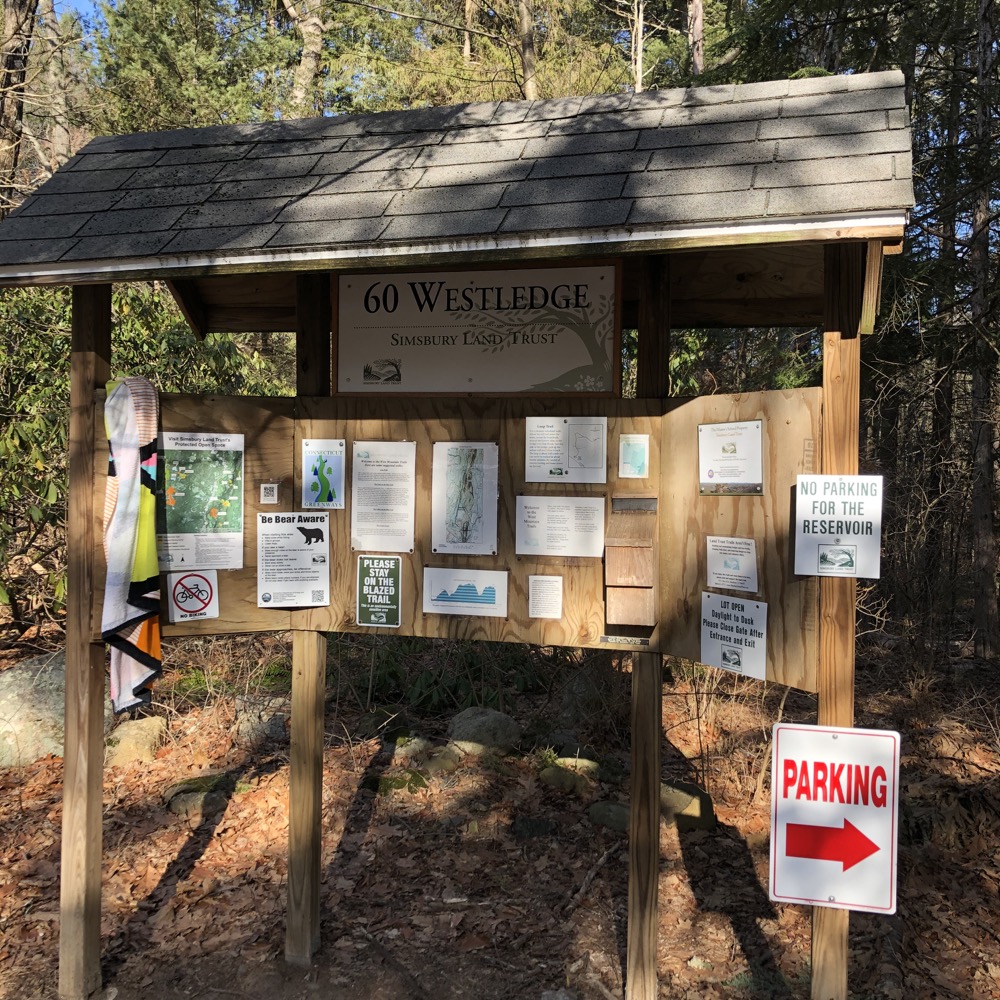 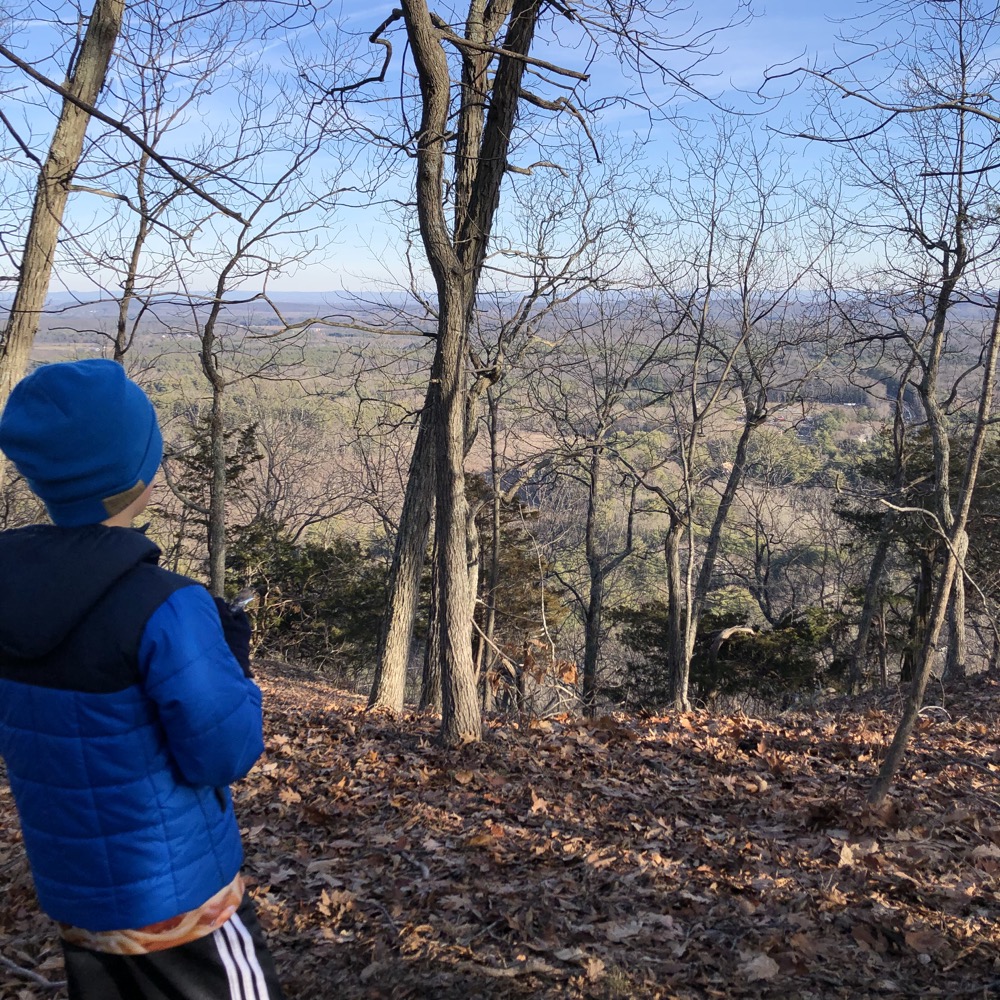 We drove out to one of my favorite areas of the state: northwest Simsbury. I make no secret that I tried to convince my wife that this where we wanted to move in 2019 rather than a third home in West Hartford, but… no dice.

The too-small parking area off of Westledge Road (Route 309) was nearly full to capacity and I was a bit scared that some fool was going to block me in, as I’d seen other fools had done to other hikers. I took the risk and we were off on our 5+ mile jaunt.

This first area nearest Westledge Road is actually a parcel called 60 Westledge Road. Very creative. There’s a little half-mile loop here. This offers a cute little walk for the preschool set I suppose. There are stone stairs and a bridge across Hop Brook. There’s even a picnic area along the red-blazed side of the loop. 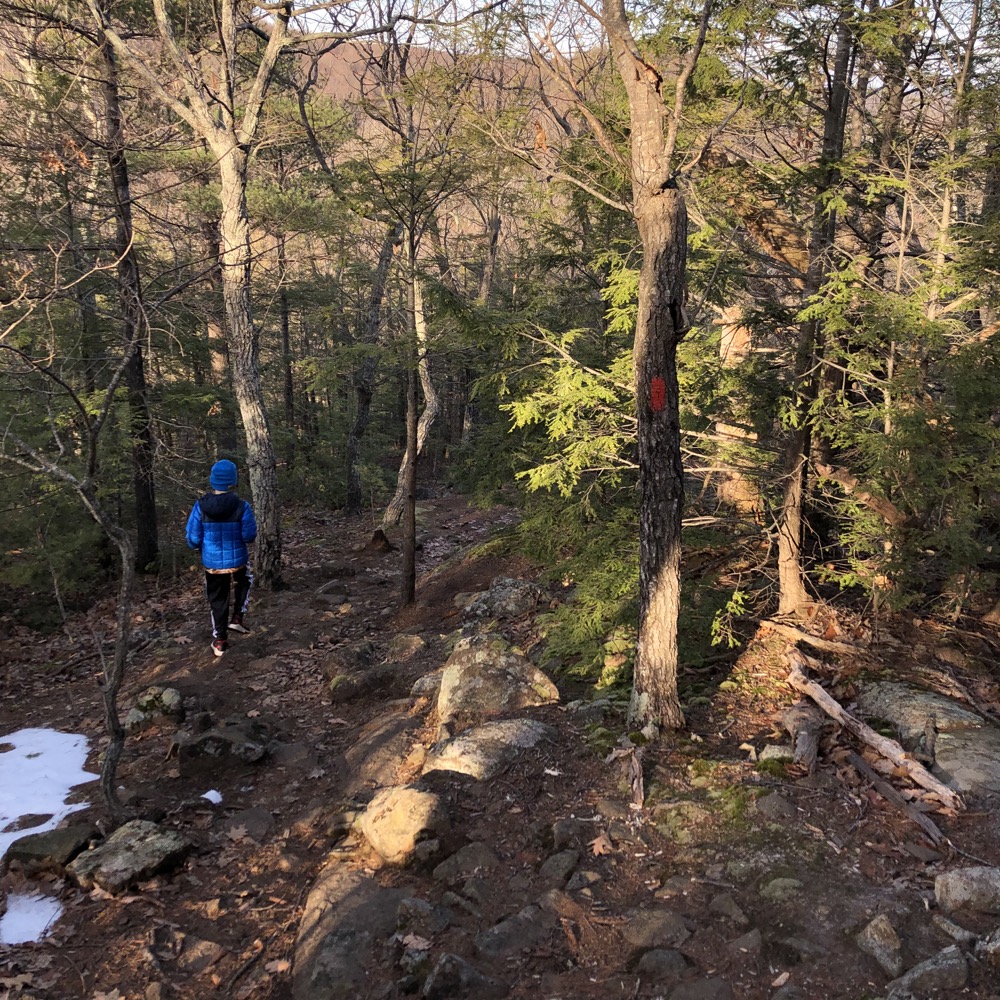 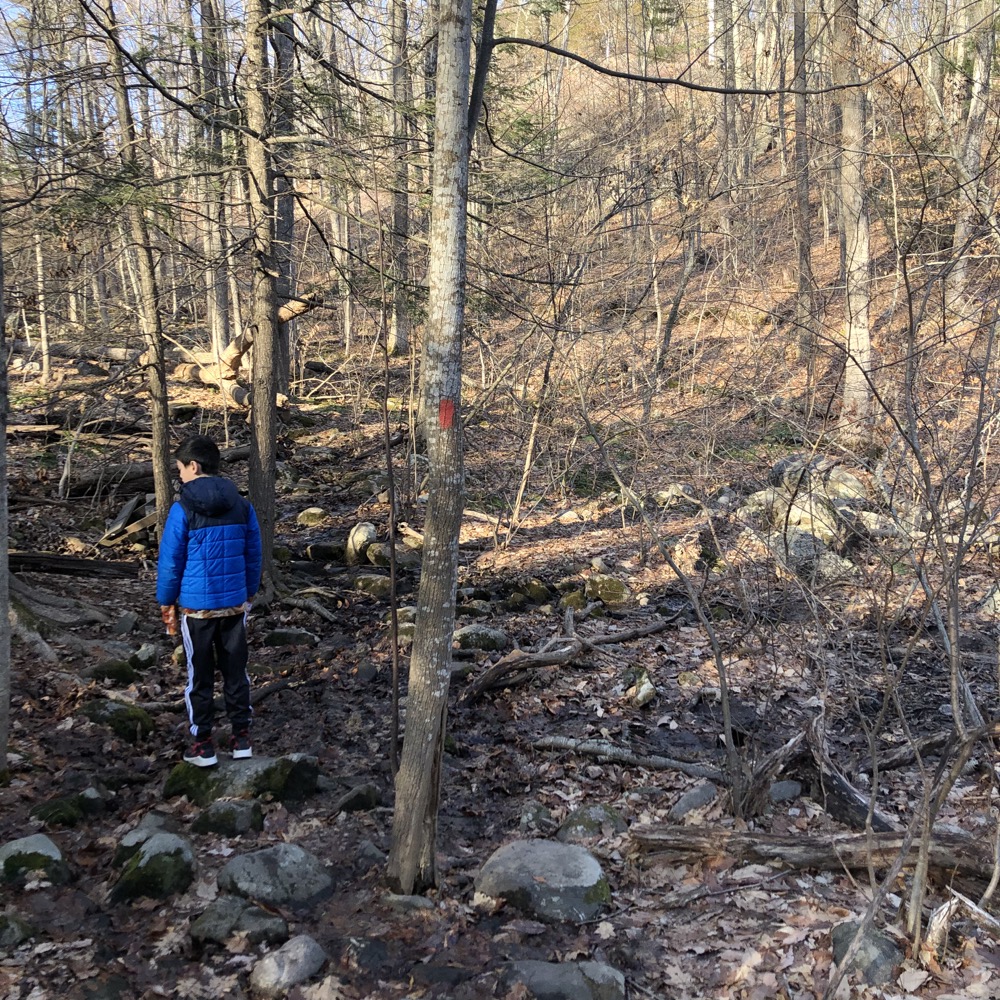 Once across the brook, you can choose the red pill or the blue pill. Err, red trail or blue trail. In essence, they form a five mile loop along West Mountain, up to the Cathles parcel and beyond, towards the southwest block of the McLean Game Refuge. We chose red, which is the eastern flank.

This took us first through The Masters School campus. I don’t know much about the Christian School, but its location is beautiful and its buildings are a weird mix of hippie-holdover things that look like yurts and mid-century blandness. (It was built as The Westledge School in the 1960’s and was bought by The Masters School in 1980.)

Once through the woods near the parking lot, we really got huffing and puffing. But not on the red trail. I forced my poor child to climb the steep hill to the abandoned ski slope. Just because it’s cool. The tow house still stands and man, this was a pretty steep drop for high school skiers in the 1960’s. (The Westledge School built it, the Masters School let it rot, but somehow it’s still very easily discernable.) 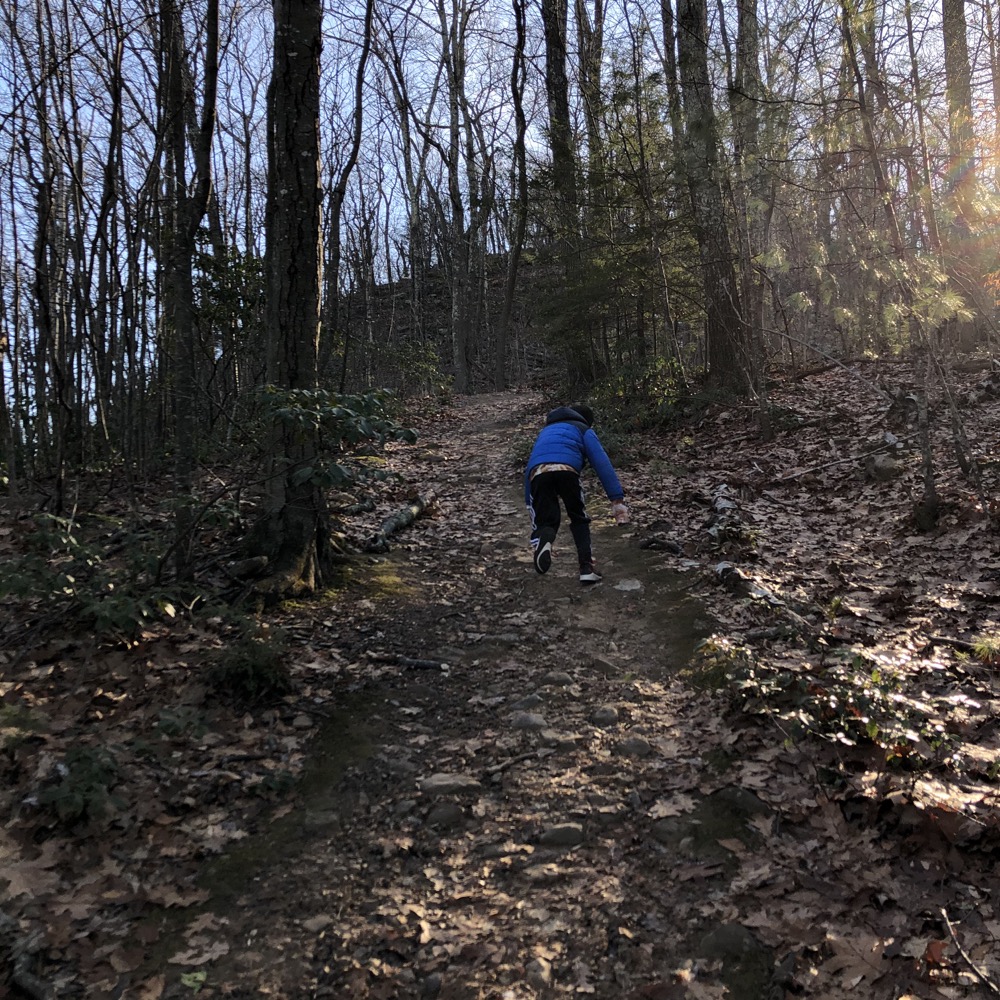 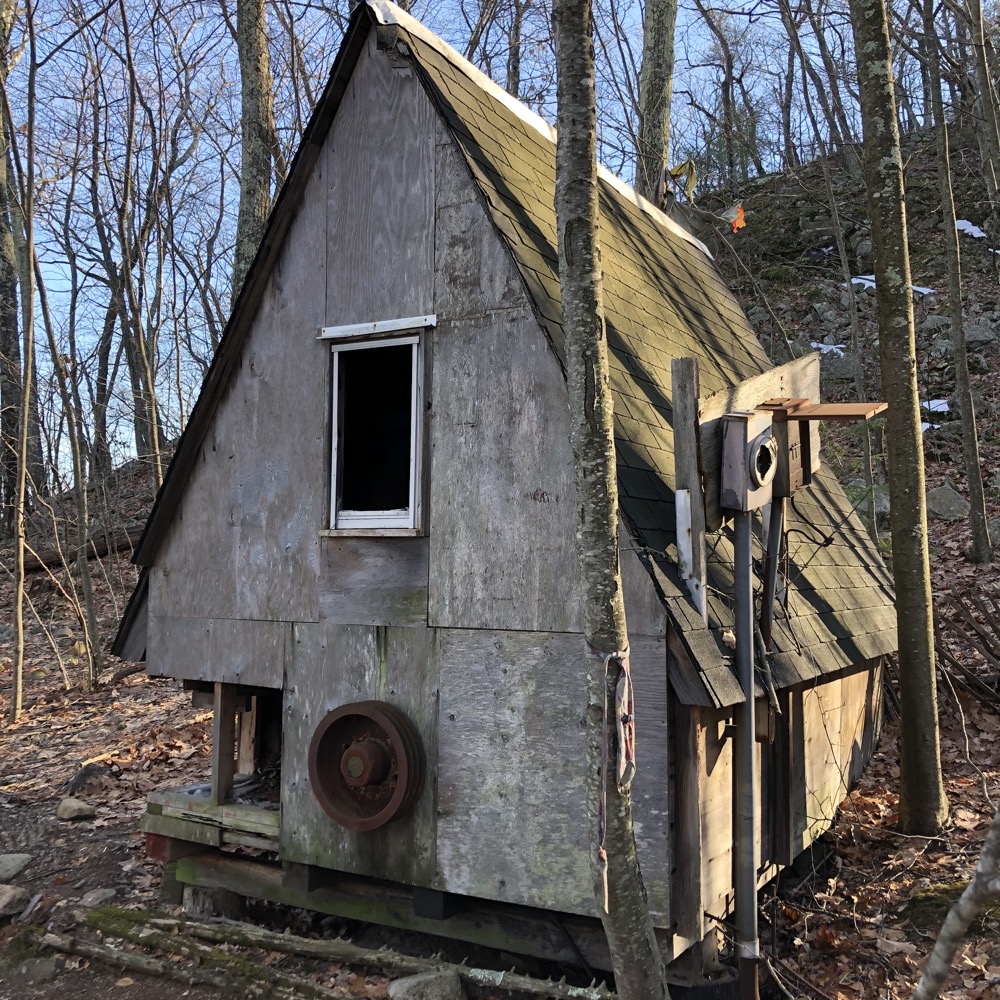 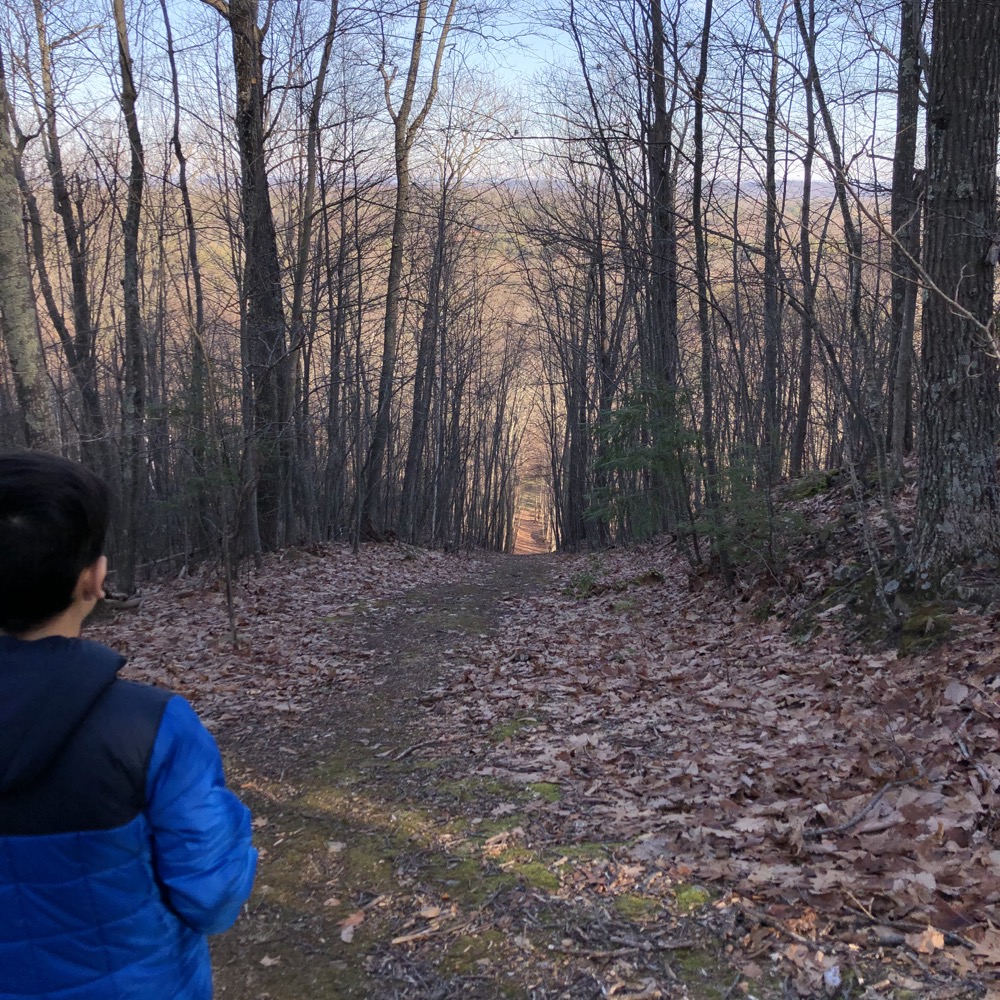 Calvin never knew that wasn’t part of the official trail, and before he could figure it out, we were back on the proper red-blazed path through the woods, heading up towards West Mountain’s ridgeline. But first we had a few ups and downs to deal with.

A powerline cut gave us our first eastern view of the day, but certainly not the best one. The trail wound near some cliffs and other interesting rock features which afforded my son an ample supply of ice daggers. Note: Nine-year-olds still love playing “ice dagger wielding ninja.” 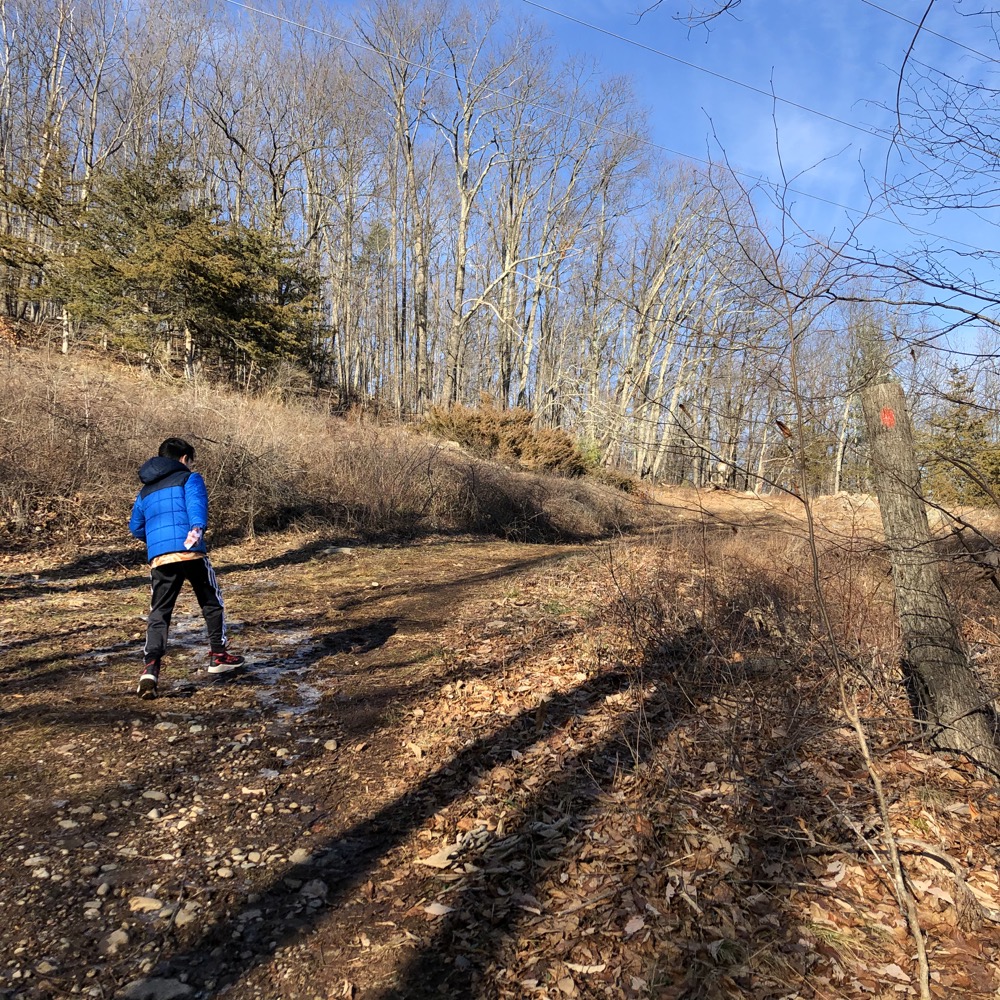 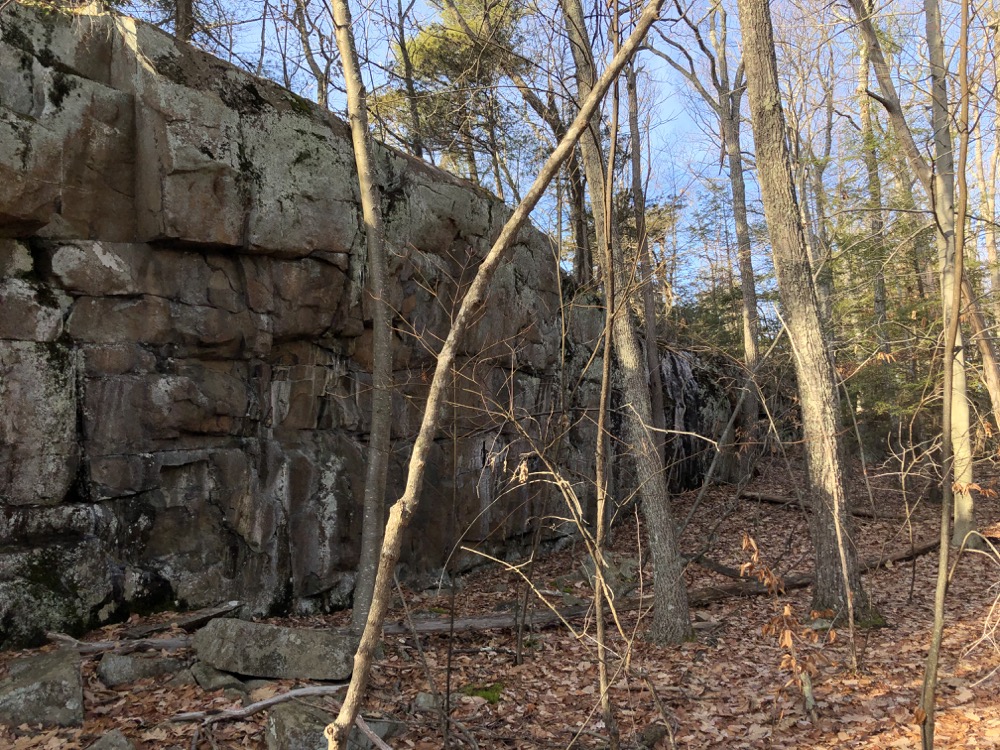 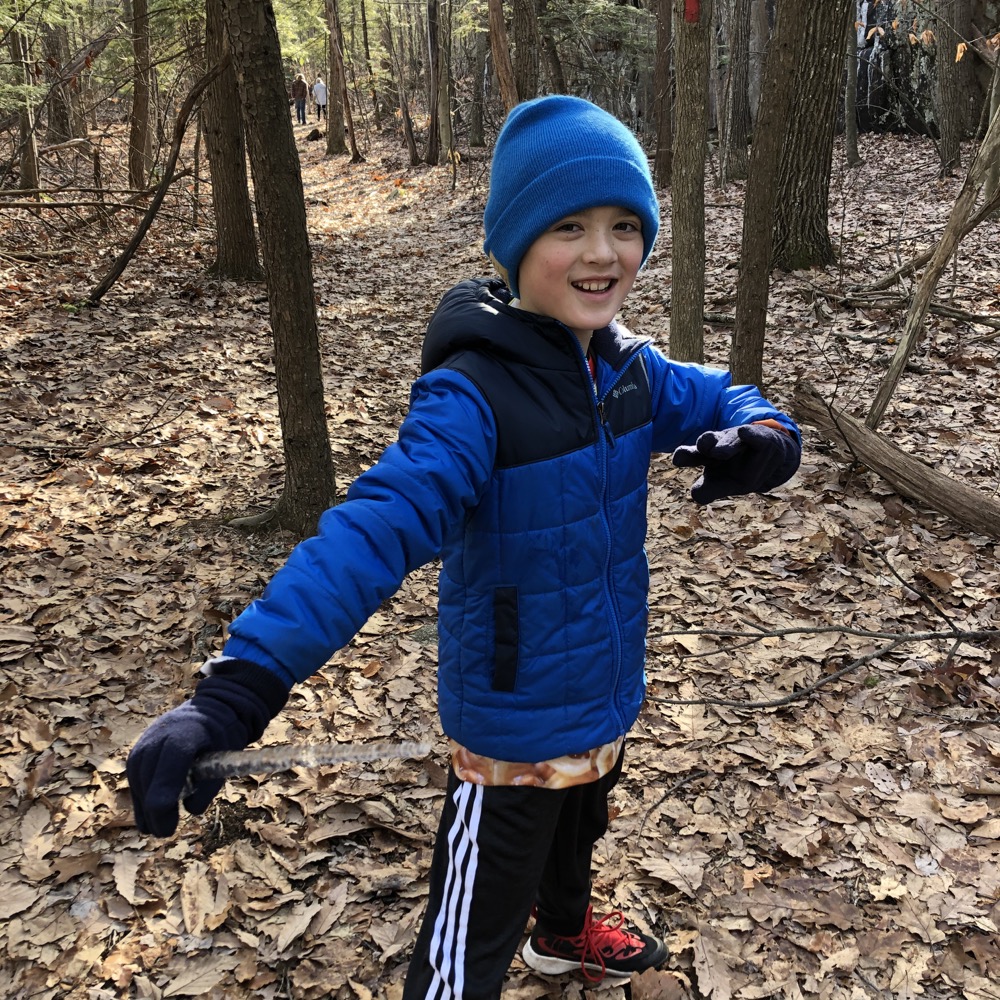 At least mine does. Some random fast hiker noticed him and made some playful “kill” of Calvin which was kind of funny to me, but my son took it quite seriously. His ninja skills had failed him. So it gave him great pleasure to sneak up on fast hiker guy at the first overlook and “kill” him back. Meanwhile, I’m just out here for a nice walk in the woods.

And we did enjoy the views along the ridge here. It’s cool now that Calvin can recognize a few Farmington Valley landmarks when I direct his gaze. I love it up here, but it was mid-afternoon in late December and we’d be hiking a valley on the way back to the car and the sun sets fast. 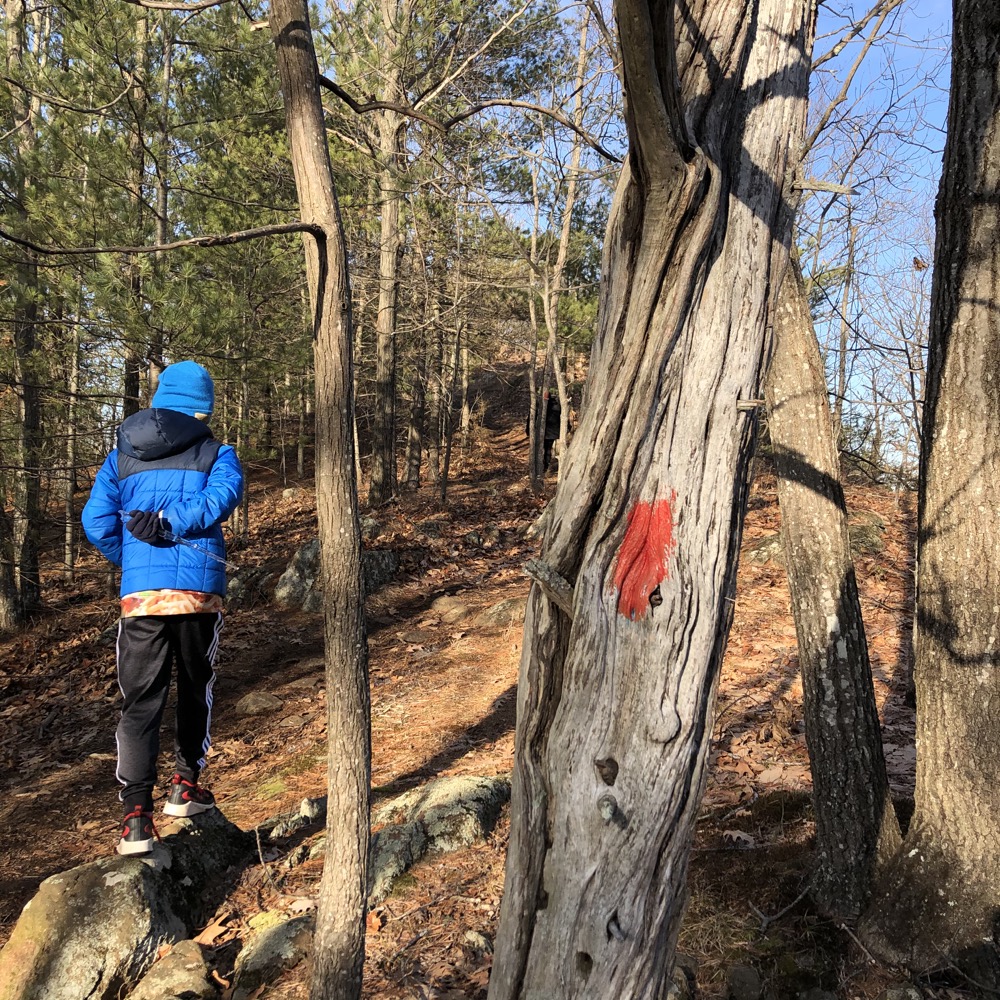 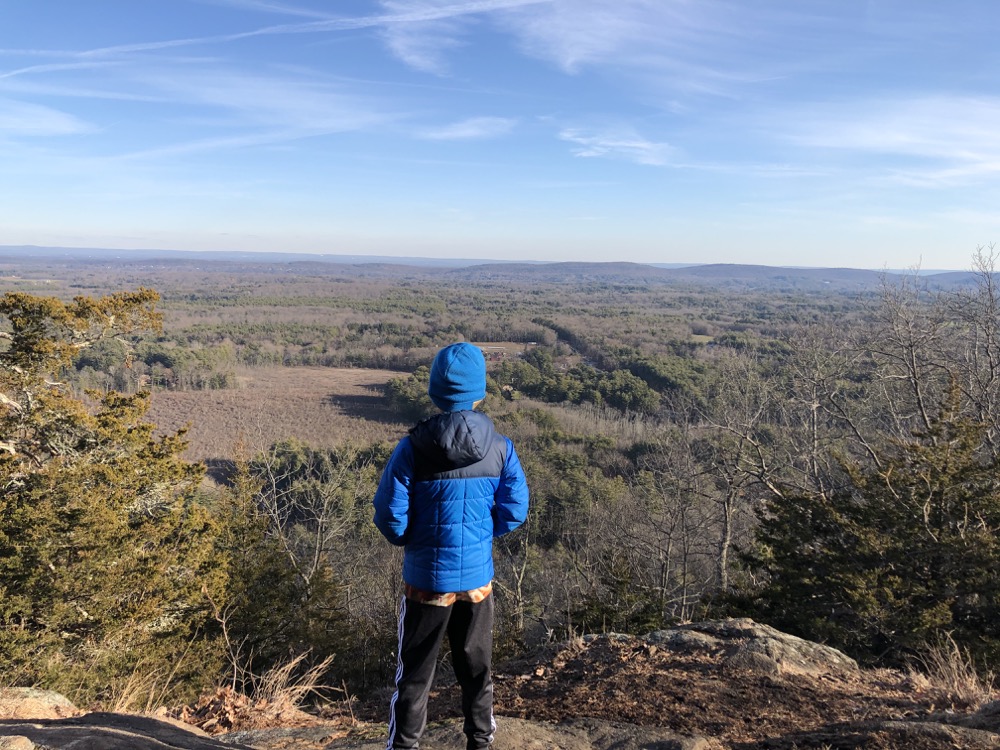 The hike down from the ridge north is surprisingly steep. Icy patches made it a bit sketchier, but even in optimal conditions, it’s fairly difficult. Near the bottom, a family (with an off-leash German Shepherd, grrr) was just starting up. Overweight, tight jeans, light jackets. I figure they made it up and rested at the overlook at which point they froze and struggled back down and cursed out the person who planned the whole trek for a week. But hey, good for them for “getting out there.” The trails are for everyone – except off-leash dogs.

Calvin and I made it to the familiar bridge he’d been to years prior. At this point, the white-blazed Cathles Trail heads down past Cathles Falls to the cul-de-sac parking on North Saddle Ridge Drive. (As noted above, this was the non-CFPA trail that got me hiking and chronicling non-CFPA trails in 2008. I’m a sentimental fool.) 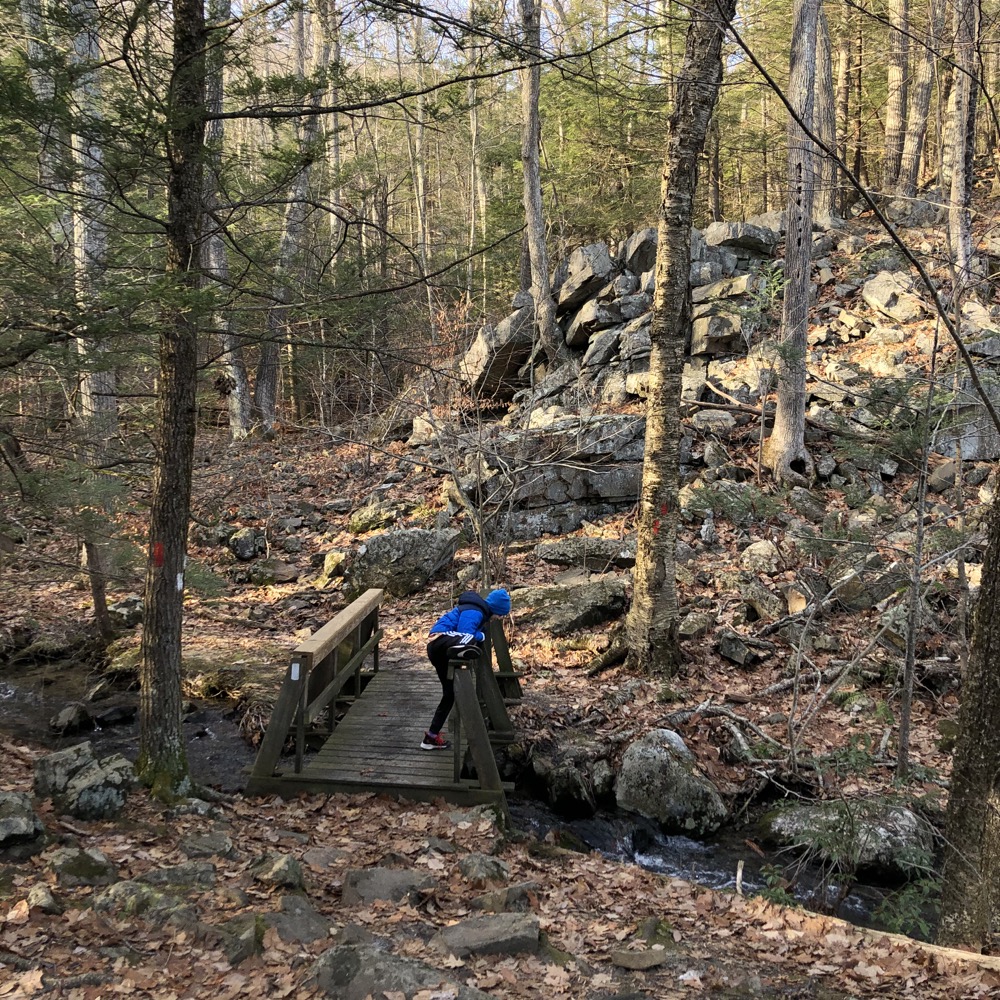 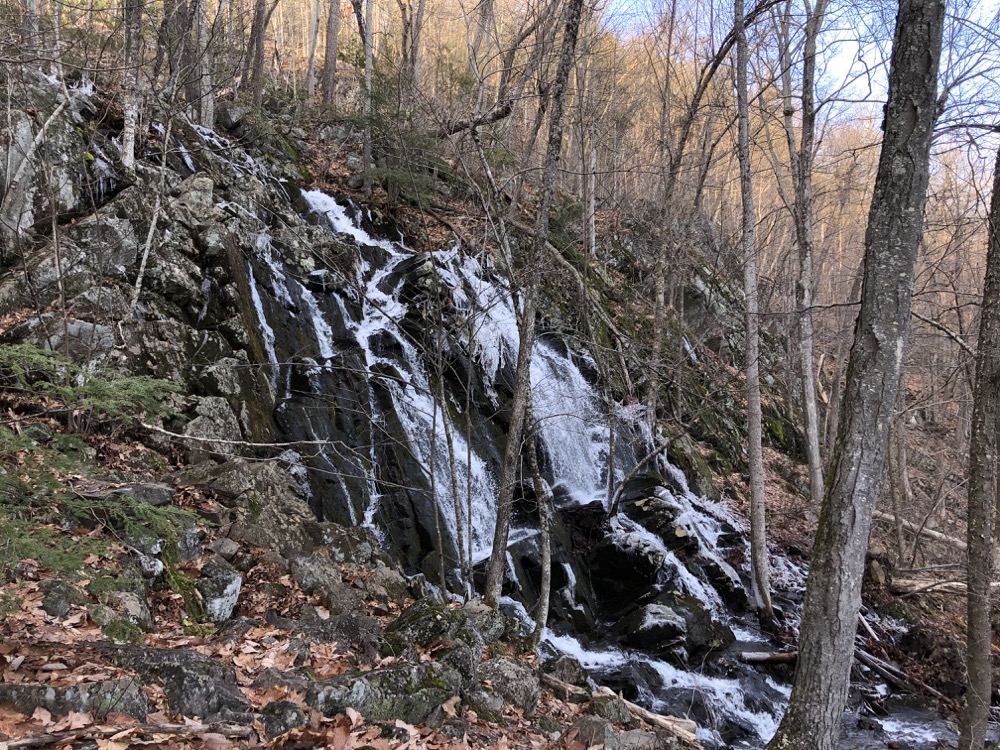 We both love waterfalls, so of course we made the side trek to see Cathles Falls again. The stream that flows here is merely an unnamed seasonal stream, so your falls experience is entirely dependent on recent rains and snows. If you are a waterfall chaser, I strongly suggest only coming here after significant rains. Otherwise, it can be a mere trickle.

Still, I like these falls. After convincing my little ice ninja that slipping on ice and getting wet wouldn’t be ideal, we trudged back up to the familiar little bridge and continued onward. I promised myself I wouldn’t do this again, but I can’t help myself. Sigh. Here we go: 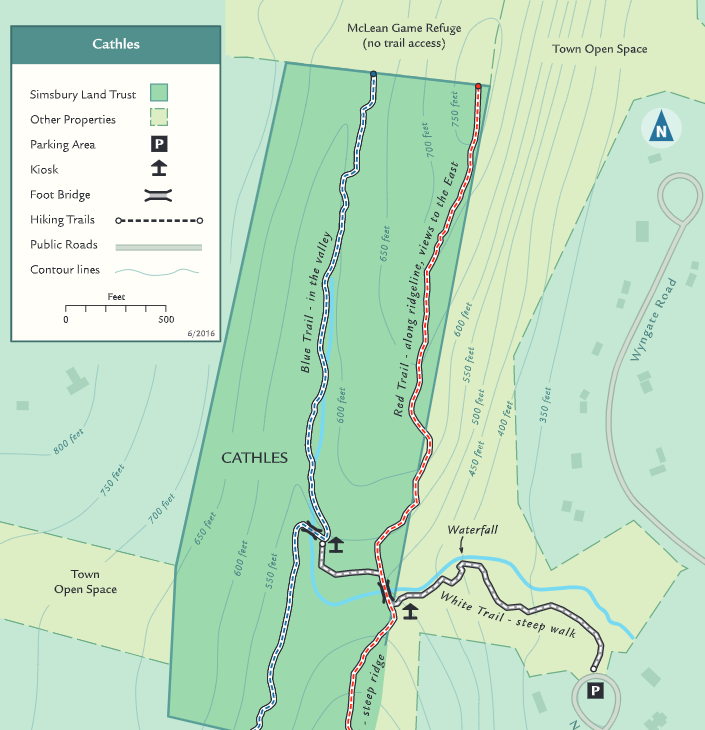 “No access to McLean Refuge Trails.” In reality, there is very clear and easy access to their trails. This artifact from McLean’s deed 100 or whatever years ago is ludicrous, I’m sorry. I don’t know why the SLT maps this area this way, because there is a white-blazed and cleared crossover trail between the red and blue trails as well.

This grinds my gears more than a rational person because I know that the CFPA’s East-West Trail would surely love to use the red trail here to cross through McLean on its way to Enders State Forest and Enders Falls there. I also know the SLT has petitioned McLean to amend their bylaws to no avail. And I also know people access McLean from SLT and Granby Land Trust trails every day, all over the place and they don’t have some curse cast upon them. Okay, okay, I’ll let it go. 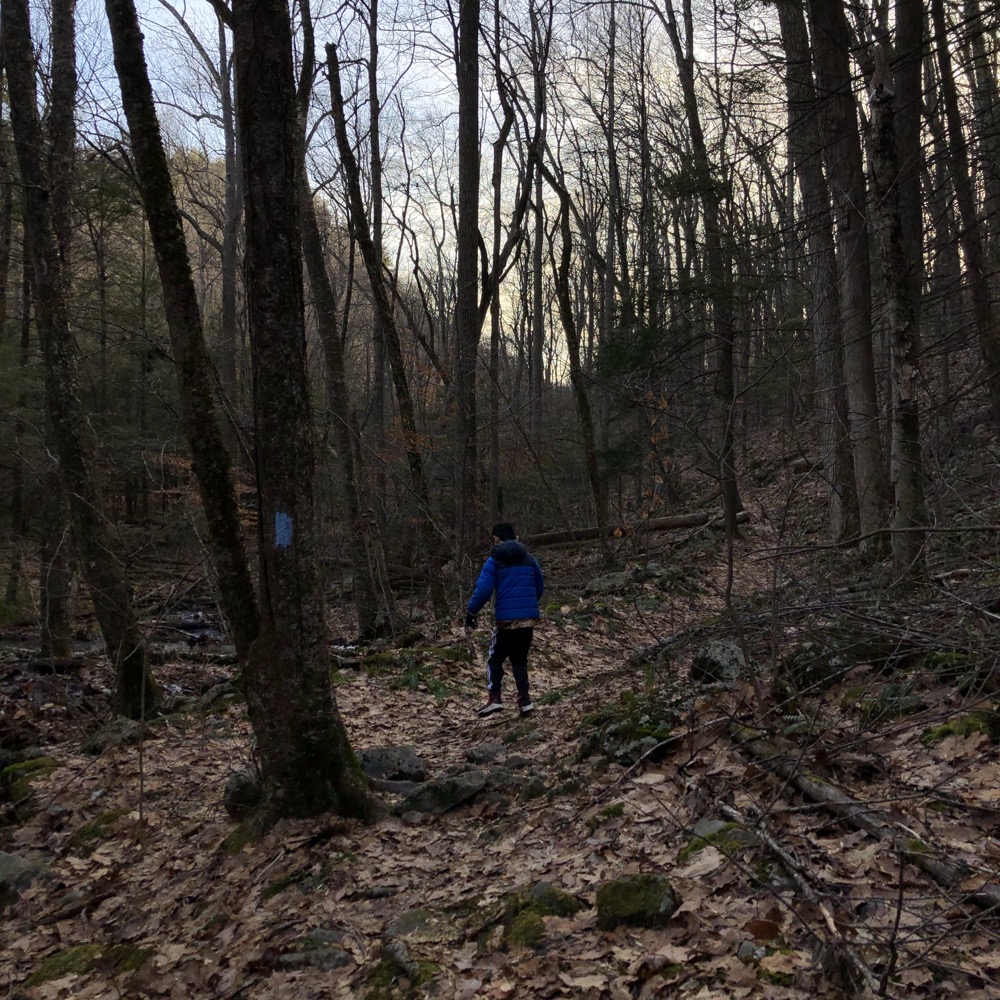 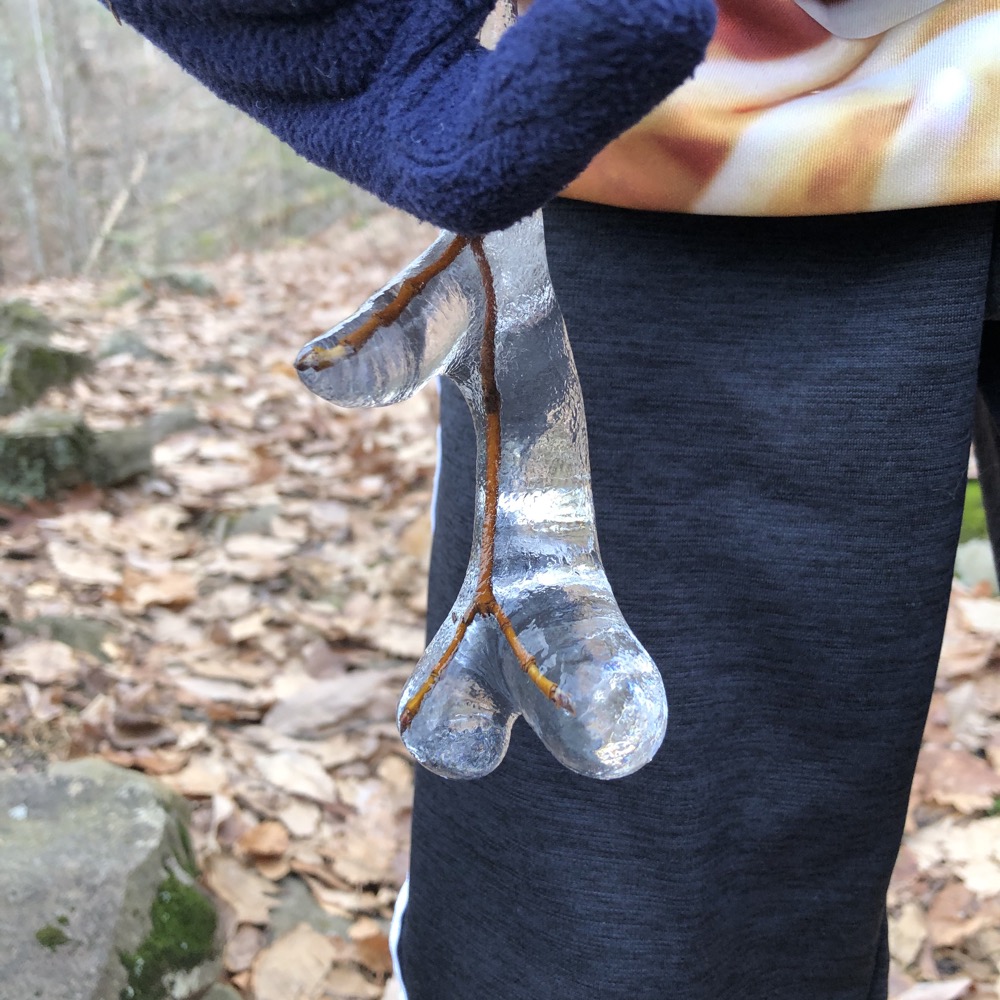 You should also note on that map that the day’s hike spent a lot of time on Town of Simsbury land. This also grinds my gears because I happen to live in a town that would never dream of purchasing and land for passive recreation… cough West Hartford cough. Simsbury is to be commended for their continued commitment to this type of thing.

Once up north and crossed over to the blue-blazed trail, we began heading south back to our car. The blue trail is completely different from the red trail, even though it’s only a quarter mile west of it at most. From the SLT Walkbook (describing south to north, opposite of our direction):

[The blue trail] drops into the valley just north of the Simsbury Reservoir and follows a rugged streamside path to eventually reach the Cathles property and perhaps the nicest example of a talus field in Simsbury. The blue trail follows a fault-line where the rock you see to the west is 500 million-year-old metamorphic schist and to the east 200 million-year-old igneous basalt. The sharp fracturing of this basalt produces the talus along the base of the slope. 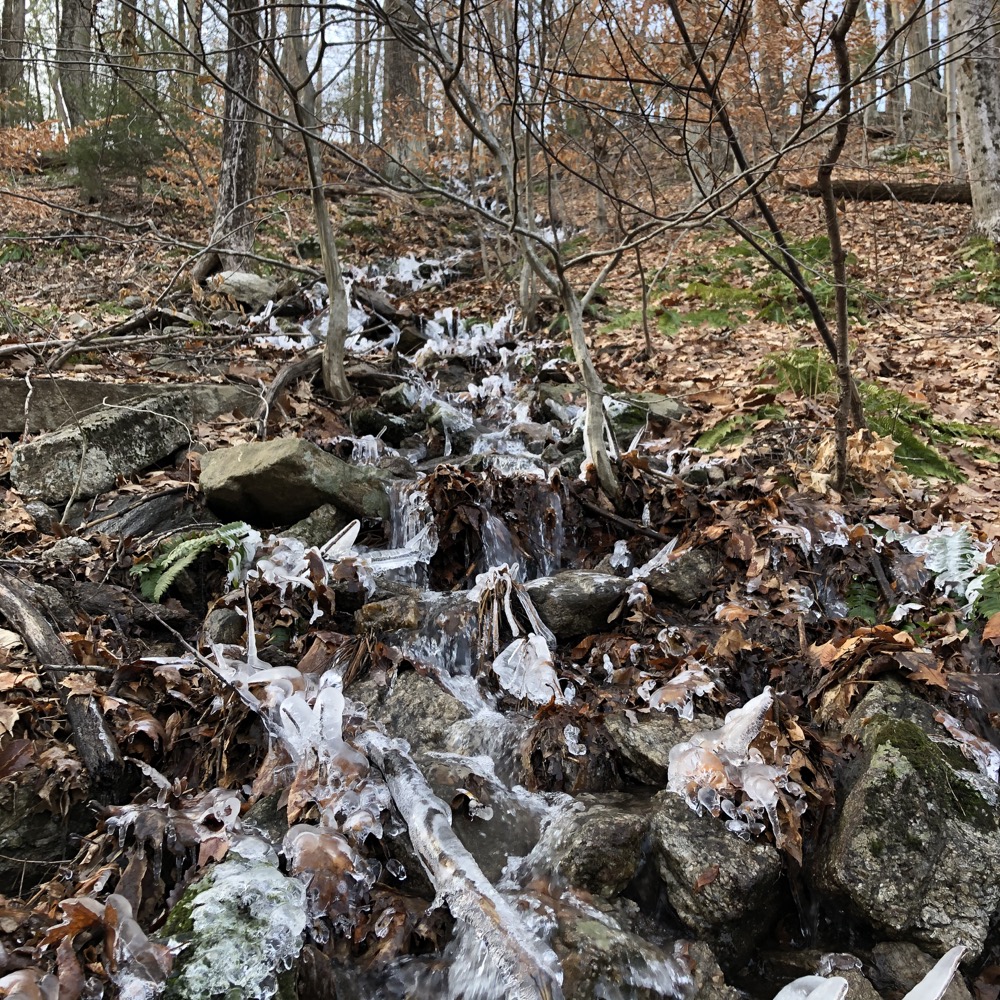 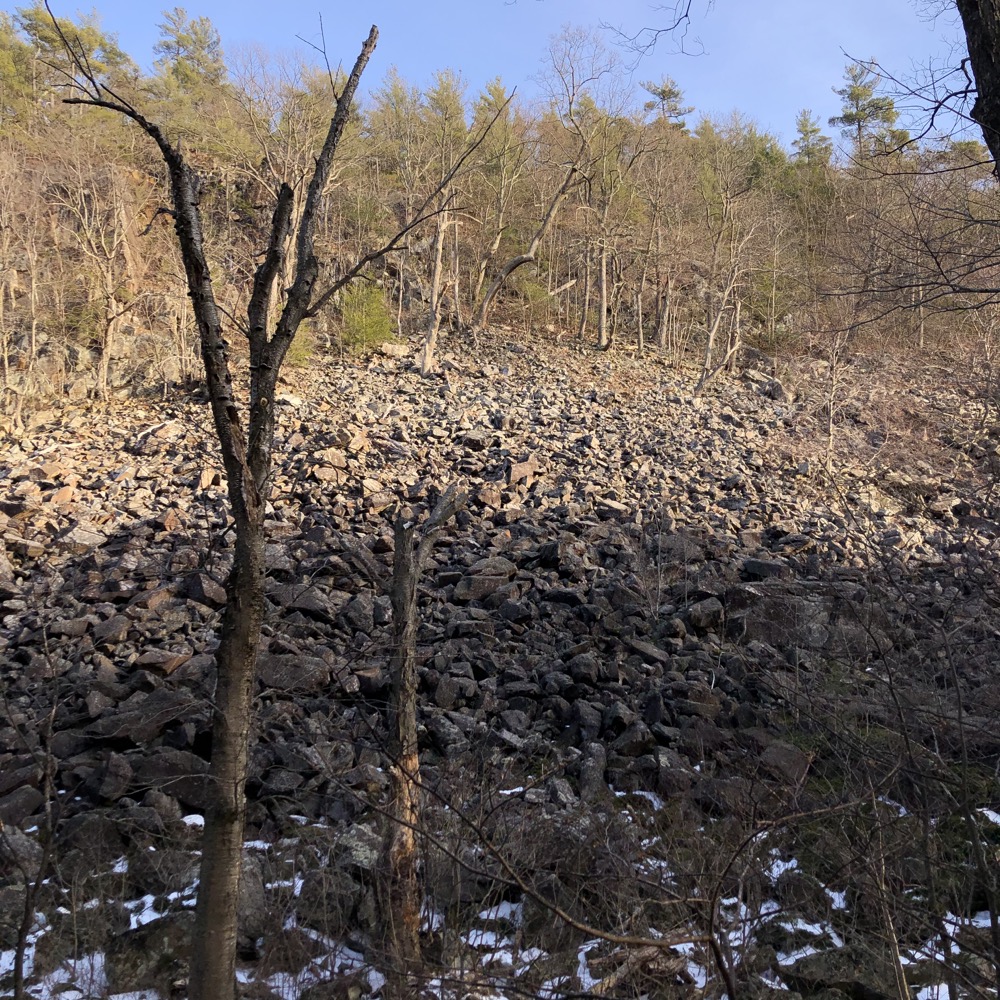 Cool. The wind wasn’t reaching us in the valley here, but it was several degrees colder for sure. And icier, as the December sun only hits this area for a few short hours per day. And yes, much rockier. There are parts below the talus field that require hiking over ankle-twisting rocks for long stretches.

I kept Calvin moving along as the temperature dropped faster than the sun. We were in no danger of it getting dark, but when I am responsible for a little human, the mere idea of that happening is enough to spur me forward. 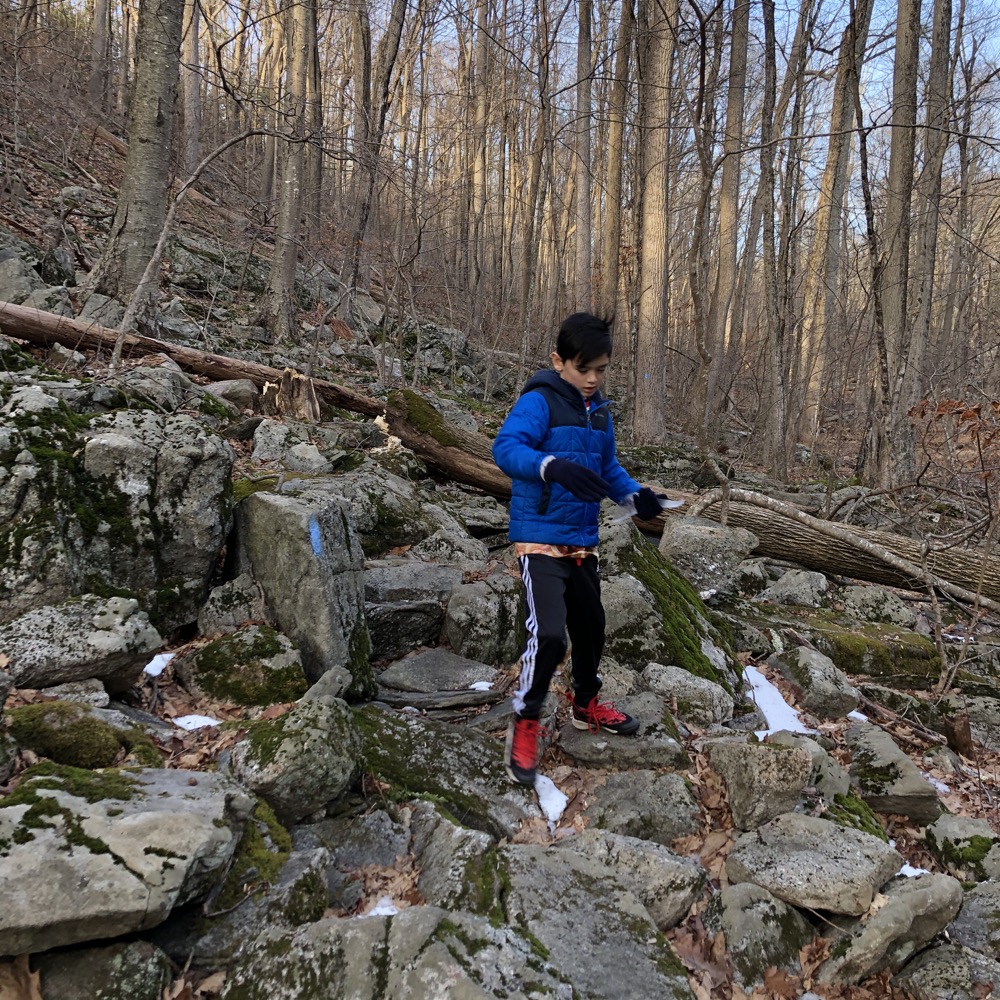 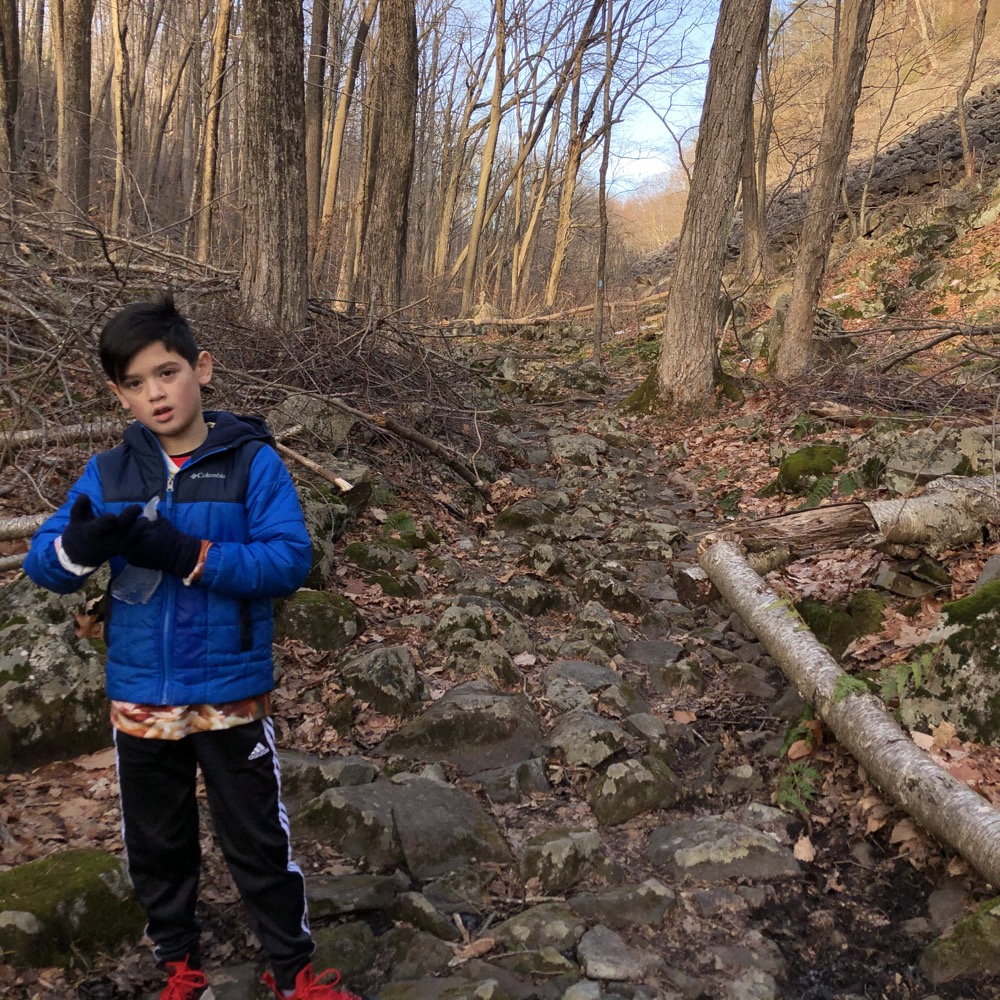 Forward right into a sharp, short branch of a pine tree right into my gut. Urgh. That hurt. Note to self: try to never actually get stabbed in the gut. Note to you all: As you navigate the trail near the reservoir, watch out for stabby short tree limbs. This was the culprit: 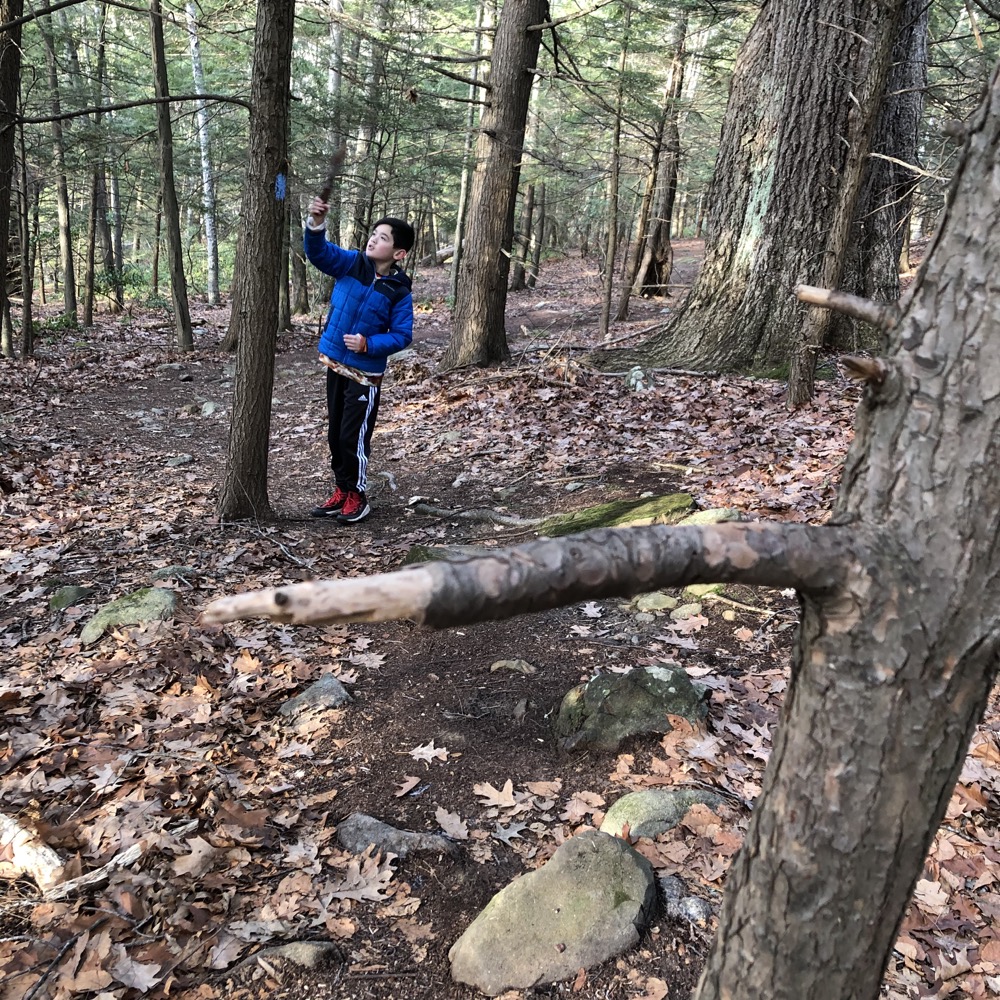 The Simsbury Reservoir, I’ve heard, is a high school hangout and all sorts of things go on up here. Things the Christians from The Masters School would certainly never do… which makes it funny that its so near Masters. Rumors of annual skinny dipping parties remain unconfirmed.

For some reason, I became curious about some structure up a hill off the trail so we decided to go see what it was. It was… the back of the sports scoreboard at the school’s sports fields. 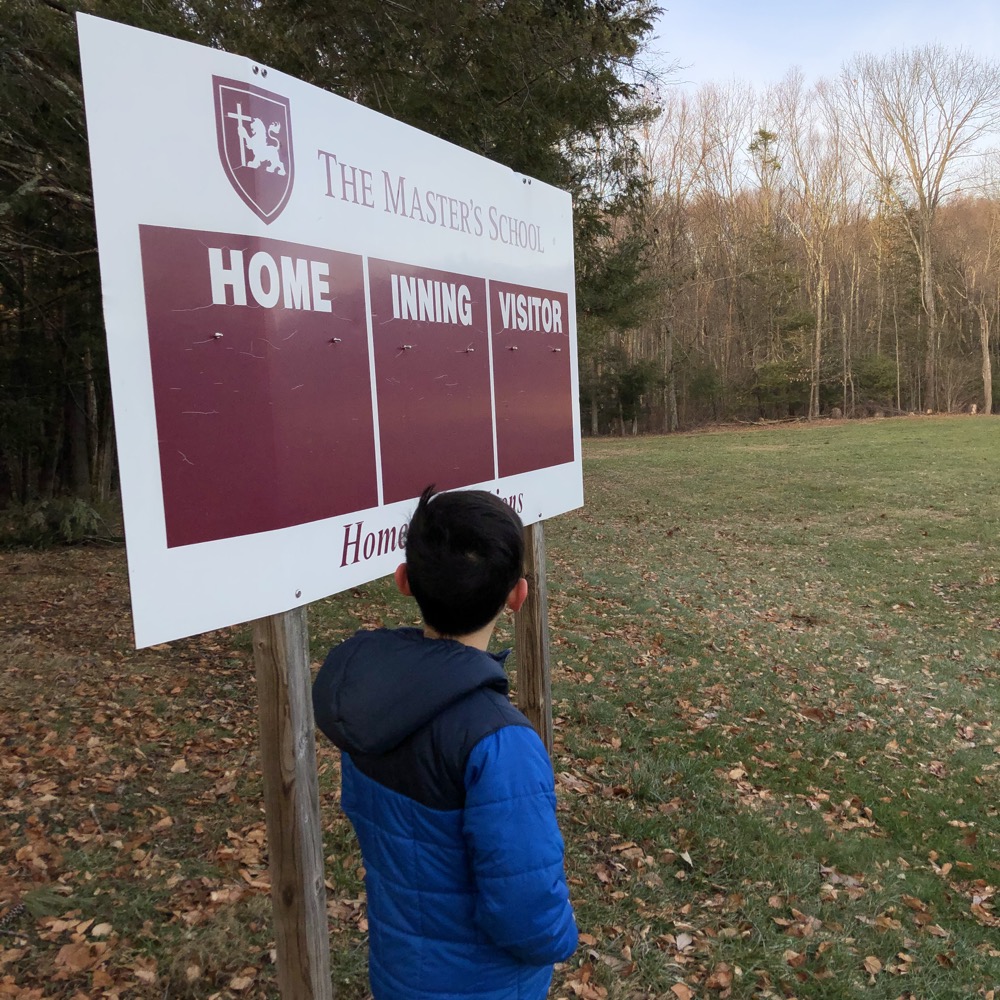 Great. From there, we walked back through the school’s weird architecture, found the blue trail again and quickly hit the initial loop near our car. And that was that. I love this hike.

But most of all I love it because it was here, back in 2008, that I realized little Connecticut has thousands of lesser-known protected properties and trails that beckon. Simsbury alone has several cool places to check out, and this one may be the best. 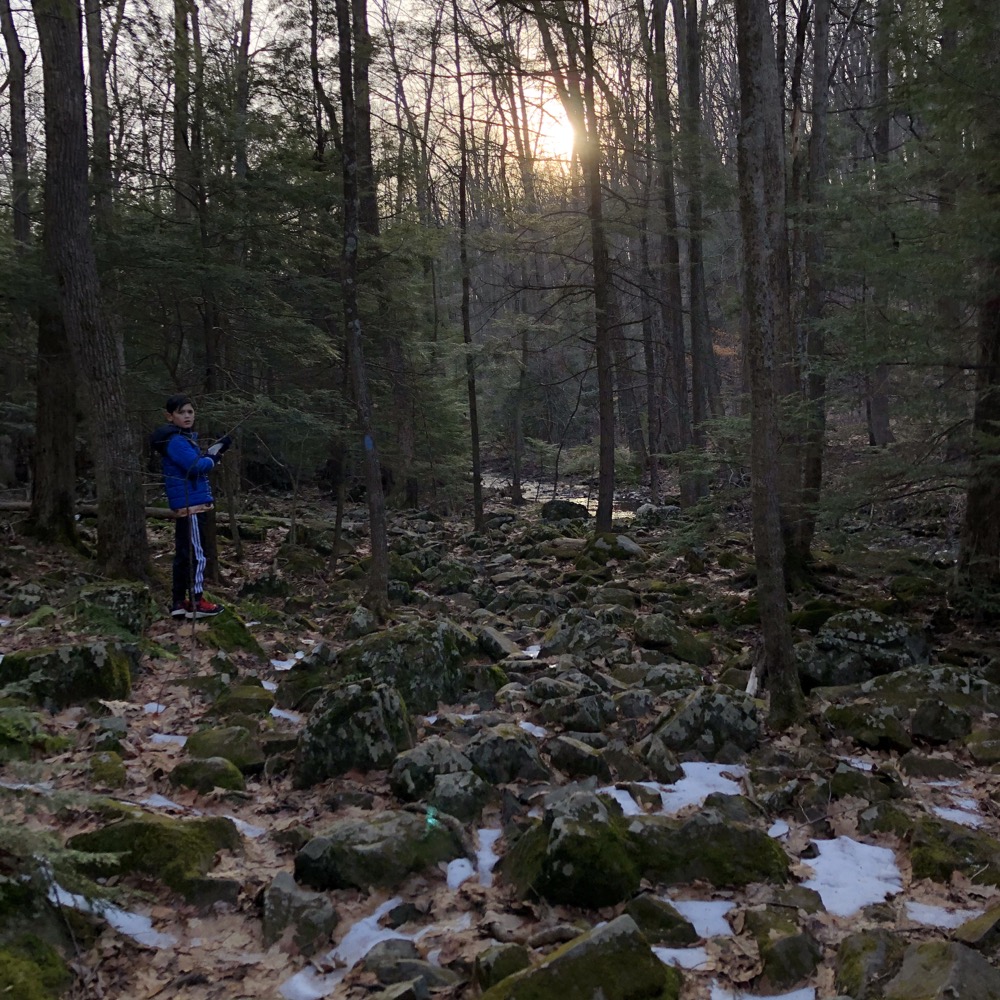 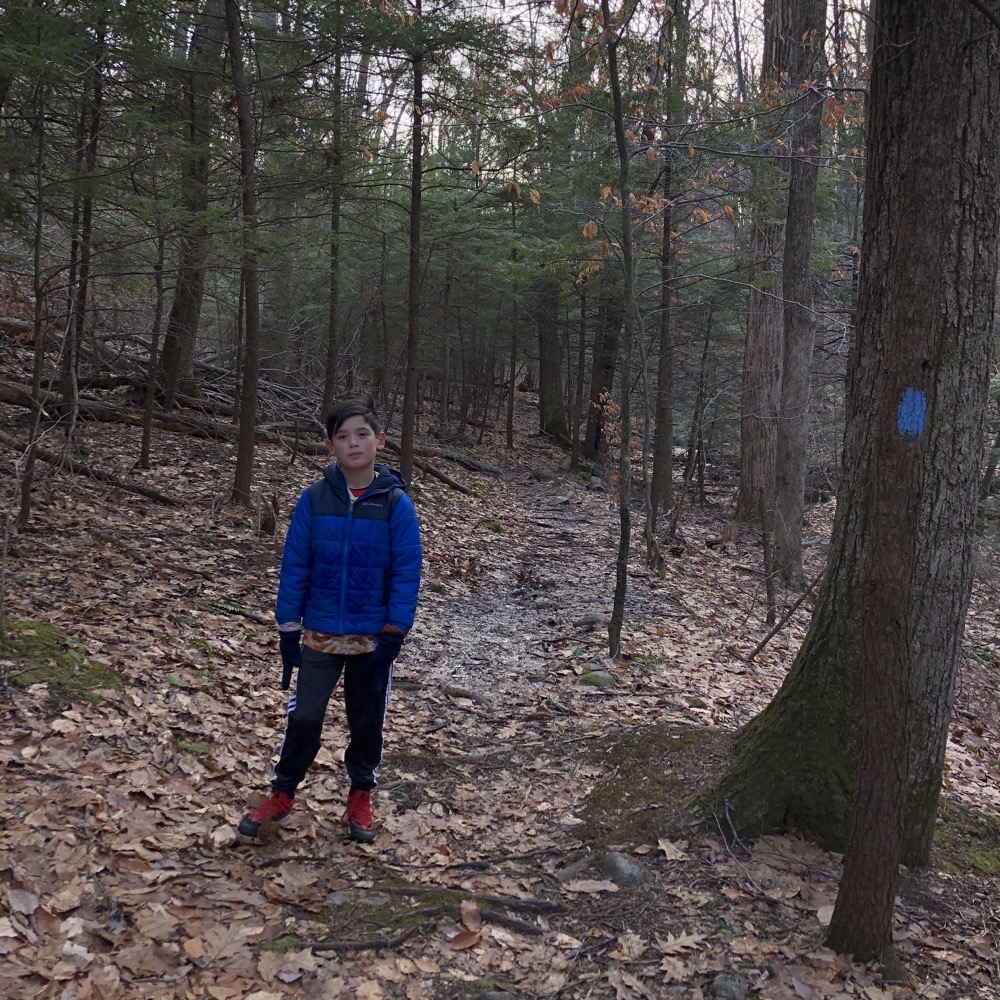 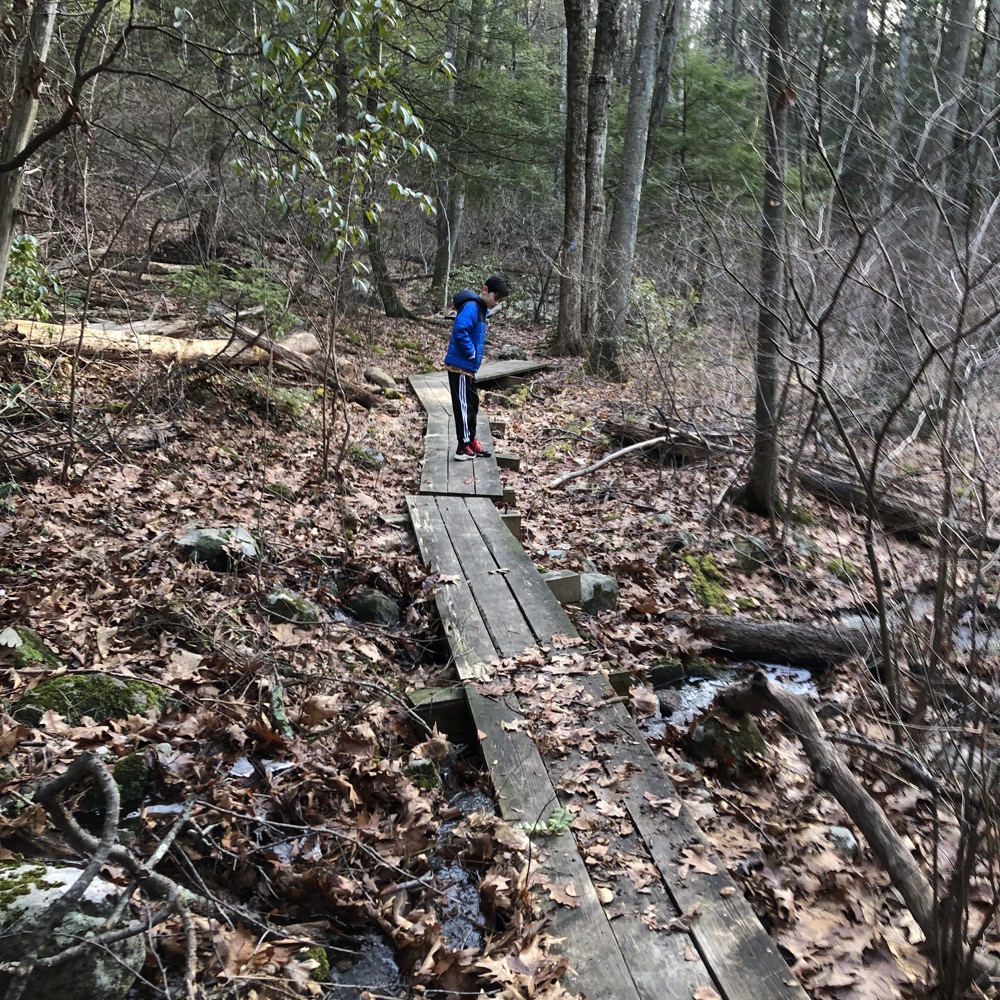