CTMQ > Everything Else > Biology & Geology > The Washington Oak (RIP)

When I write my book, how am I going to incorporate all my brilliant title puns? I lose sleep over this question. 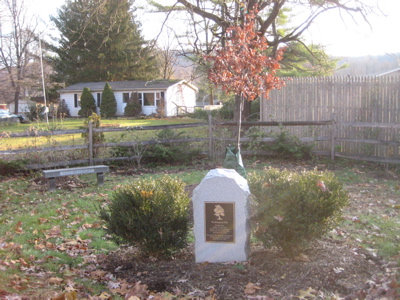 During a car transfer in the middle of a day-long Appalachian Trail hike, I made it a point to seek out the intersection of Newton and Gaylord Roads in the Gaylordsville section of New Milford. After bouncing down the dirt Newton Road, I came upon the site of the historic now-gone tree.

There’s some poetry in writing this now, a few weeks removed from a historic October snowstorm that knocked out power to half the state for a week by bringing down tens of thousands of trees which still had foliage. Our state’s two most famous still-standing trees, the Pinchot Sycamore (my visit) and the Granby Oak (my visit) both suffered significant damage and may become mere plaques like this tree during my lifetime.

And our state’s most famous tree of all time, immortalized on one of the best of the 50 state quarters, the Charter Oak, gets more than a plaque – it gets a monument! (my visit)

Amazingly, Gaylordsville has a few museums and New Milford has many more. But still, the local DAR chapter has sought it fit to honor the dead oak with a little park and memorial. So why was this important? Because George Washington stopped here on a march once (or maybe twice) for some lunch and some planning. That’s it, that’s all. 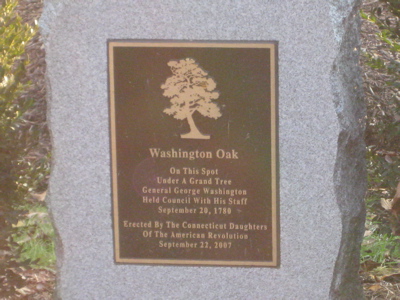 Here’s an article by Joe Hurley of the Danbury News-Times about the tree, shortly after it fell from disease in 2003:

The Washington Oak, one of New Milford’s most famous residents, died Tuesday after a long illness. It was about 300-plus years old. The tree received its name and fame from the commonly accepted belief that George Washington held a staff meeting under the tree during the Revolutionary War.

Washington also is said to have met with the Marquis de Lafayette under the tree when the Colonial army stopped for lunch on its way from New York state to Hartford, where Washington hoped to persuade other French officers to join the war against England.

The tree’s fame grew over the centuries and it became a historical centerpiece in the hamlet of Gaylordsville. Its sheer longevity made it the oldest living landmark in Connecticut, according to the Gaylordsville Historical Society — until Tuesday.

“People stop here seven days a week to look at the tree,” said Barbara Diecke, who lives next to the tree on Gaylord Road. “People drive up on the grass. They have picnics under the tree.”

Diecke was looking out her window when the tree suddenly split apart about 6 p.m.

“I thought: Oh, God, there she goes,” Diecke said. “I’ll miss it. I’ve lived here so long, it was part of my existence,”

The death wasn’t unexpected. The white oak had been declining since it was badly damaged in an ice storm a decade ago. A limb fell in 1996 and the tree was pruned two years later.

Just last week, another section fell, leaving just three major limbs on the tree. At the time, tree warden Philip Lovell said the only hope of saving it was another pruning — and that would have to be done quickly.

But the oak couldn’t wait. The side bearing the three limbs plummeted onto the road taking an electric line with it. Police closed the road and town public works crews were called to clear the debris Tuesday night.

It was a relatively swift end for a tree that seemed in good health 15 years ago when its limbs spread 115 feet and its base was 27 feet around.

Tuesday night, all that remained was a hollowed stump about 10 feet high with a jagged edge shooting five feet upward. 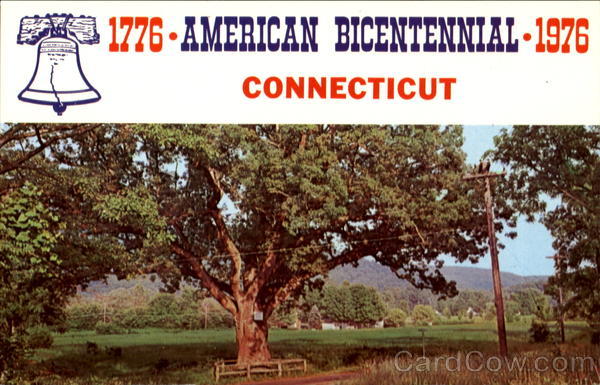 By 7PM, more than a dozen onlookers had come to pay their final respects.

David Jalbert of nearby Newton Road said he was taking pictures to send to a woman who lived nearby more than a half century ago.

Others just wanted to see the damage for themselves.

“It’s devastating. A part of our history is lost and it cannot be recaptured,” said Sherman resident Jennie Rehnberg who grew up in Gaylordsville.

Rehnberg is the regent for the Roger Sherman chapter of the Daughters of the American Revolution, which owns the tree.

Richard Kosier, president of the Gaylordsville Historical Society, said he couldn’t bring himself to go to the site Tuesday night.

“I just think it was a great landmark,” he said, adding that the tree was a “special place” in Gaylordsville.

“It’s something that’s going to be missing from our lives. But there’s always room for something new.”

The DAR has the same philosophy. The organization plans to plant a sapling grown from a Washington Oak acorn at the site, Rehnberg said.

She said the wood salvaged from Tuesday’s fall will be used to make memorabilia such as gavels.

Kosier said the historical society may have a ceremony honoring the tree. Until then, people who want to touch a little of New Milford’s, and America’s, history may visit the site at the intersection of Gaylord and Newton roads. Calling hours are from dawn to dusk, daily.

It was just a tree, people. Geeze.