CTMQ > Everything Else > Geography > Westernmost Point in Connecticut

Channeling My Inner Horace Greeley
East side of Route NY 120, Greenwich
May 8, 2010

I don’t need to tell you that I have seen a lot that Connecticut has to offer. In fact, I’m confident in saying that I’ve seen more here than 99.9% of the population. And yet, there are certain things that have a bit more of an appeal to me than others – and I’ve found that these things have a bit of a more national appeal as well. 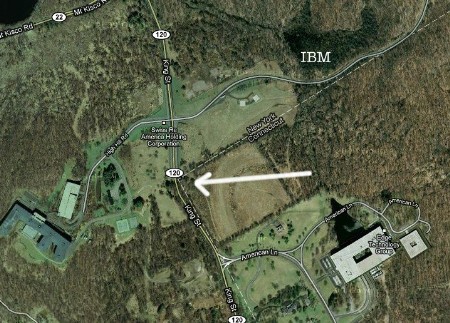 And believe it or not, standing at the westernmost point in the state is one of those things. No, I’m not kidding. Stop shaking your head.

Geographic extremes and curiosities have always held a fascination for me. Each one is like a little scavenger hunt often with a reward at the end. In this case, I found an unexpected and nearly overgrown stone marker which is almost hidden from view. But I found it! And it was awesome… Even if I almost got maimed getting to it.

I’m not one of these GPS people; I’m a map guy. I’m a gut-feeling guy. I seem to have been born with a hyper-accurate sense of innate direction. I always know which direction to go no matter where I am and I always know when I’ve gone too far. Just ask my wife; if it were a marketable skill, we’d be rich.

I mention this (I only brag about myself in useless terms) because finding the westernmost point in Connecticut, although it’s right alongside a busy road, is far more difficult than it should be. 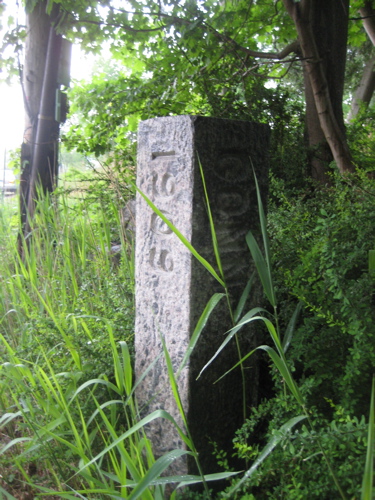 Most of the confusion stems from the uniquely confusing road I took to get there: Route NY 120A. “But,” you ask, “You were in Connecticut, right?” Yup. That road is so strange that I’ve given it its own silly page here on CTMQ. Unless you know the exact exit off of the Merritt Parkway in Greenwich and have a clear map in front of you, the switching between NY 120A and NY 120 is a bit hard to follow along.

So hard, in fact, that I missed a turn along the way! I can’t believe I’m admitting that. For shame. (I had no such clear map, believe it or not.)

This was actually my second go at the westernmost point. A few years ago on a drive back from my family in Delaware I decided to make the detour off the Merritt. 10 minutes later, on what I thought would be a straight-shot drive, I turned around with a crying 2 year old and an annoyed wife both just wanting to go north, not west. I guess that’s understandable. 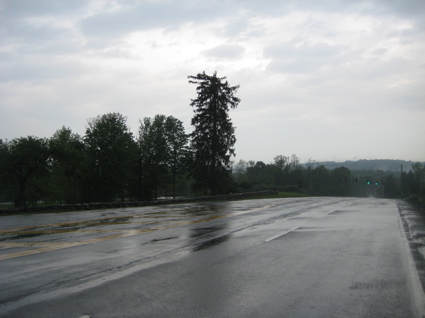 Bottom line for those of you wanting to stand at this stone marker in extreme western Greenwich: It is much more straight-forward to find off of exit 2 from I-684 right at the ritzy Westchester County Airport. From there, just follow NY 120 north, which is entirely in New York. But – and here’s the key point – it flirts with Connecticut’s border a couple times and grazes it at – yup – the westernmost point.

And unless you know what you’re looking for and pretty much exactly where it is, you’ll never find it. And that’s why CTMQ is your friend…

When traveling NNW on 120, you’ll pass an entrance to some business with the word American in it. This is American Lane, which isn’t signed. It’s not signed when it loops around and intersects with 120 again in a sixth of a mile or so.

As 120 curves slightly to the right and there are woods and an overgrown stone wall on your right, slow down! Follow the stone wall with your eyes until about 10 feet before the end (of the wall and the forested area), you’ll see it – a 5 foot tall stone tower with NY on one side and CT on the other.

(If you reach the entrance to IBM’s and Swiss Re’s headquarters, you’ve gone too far.)

You can semi-safely park 30 feet beyond the marker at the beginning of the turn off for IBM. But when walking back to the marker, BE CAREFUL. I almost got taken out by a speeding taxi on its way to pick up some ridiculously rich hedgefund manager.

But what the heck, those are the risks we geo-extreme hunters deal with. 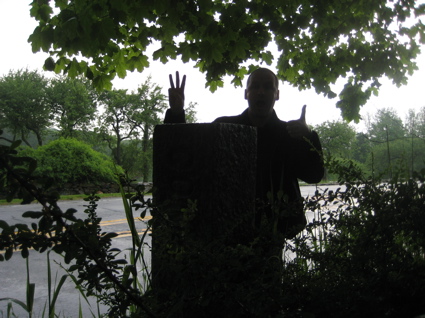 As an aside, after finding this thing, we drove to the Audubon Center of Greenwich and then back to the center of Greenwich. There are worse places to take a lazy drive… Greenwich’s backcountry is the stuff of Vanity Fair pictorials and TV shows about extreme wealth. Every cliché, every overabundance, every assumption of what you’ll see there comes true, 100 times over.

In fact, if you’re bored, you can poke around Greenwich to see some “famous” homes. We drove by a bunch of these while making our way around and through Greenwich. I don’t know who Richard Richman is, but it’s funny that a rich guy named Rich Richman lives in Greenwich in this little ol’ thing.