While there are many structures in the Southern states which are attributed to the craftsmanship of African Americans, few such buildings exist in New England. One example, however, is the Walter Bunce House, constructed by Alpheus Quicy. Born in June 1774, Quicy dealt in real estate in southeastern Connecticut along with his father and brother. As a stonemason he built several fieldstone houses for prominent citizens and numerous dams in Manchester. The Walter Bunce House is the only fieldstone dwelling constructed by Quicy that still stands today. 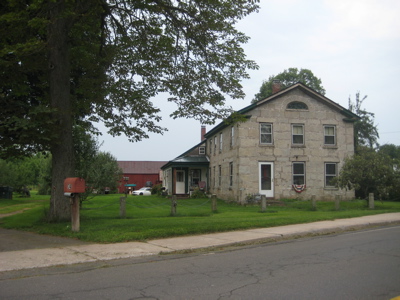 It stands alone right next to the I-384 underpass very near Manchester Community College. It’s a handsome house in its own way.

2012 Update: I’ve been cleaning out emails and am dismayed with myself that I’ve found so many from readers that I’ve more or less ignored. I’m a terrible person. Here’s one from a Tom H. regarding his visit to the Bunce House:

After 30 years of driving by Bunce House, I took advantage of a tag sale to stop on 8/13. Current resident says house was built in 1821, one of three by Quincy (I thought she said Quincy). Two others like it – fire got one, other gone too. He built a Cheney-Bunce papermill destroyed by 1853 flood. Bunce moved to NJ and built another mill. Cheney went back to family biz. House walls appx 22 inches deep and timbers of 9 by 24 to 30 as used in mill buildings. Up to 2001, garden hoses ran into house for water. Kerosene lamps and limited electricity. Two-seat outhouse. Current family since 1800s. Their farm was a victim of unfriendly state takeover because Ella Grasso wanted land for college use (MCC-MCTC). This from casual chat with very nice lady.

Well done, Tom, and thanks for reaching out!