I like public art. I love good public art. So here and there on CTMQ I’ve highlighted some of the more interesting or significant public art around the state. I probably wouldn’t have written a page about this one if not for what happened immediately after we checked it out in May 2011. 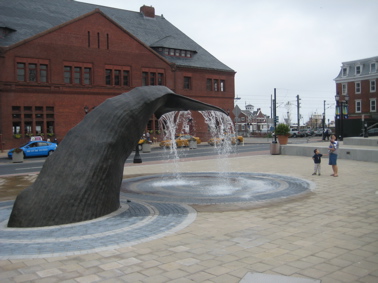 If you came to this page from the one about our visit to the Nathan Hale Schoolhouse across the street, you know a little of the background. This plaza in New London is a hangout for the local homeless and drug-addled folk. (Which is a bummer since it’s actually a super pretty area.) I saw a drug transaction on my way into the museum but was assured by the docent there that the crowd out by the fountain were good guys.

While that very well may be true, and our short frolic around the tail was without incident, something happened a few days after our visit that ruined this cool place for everyone.

The water from the tail was turned on only a few days before our visit. And it was turned off a few days afterwards. Why? Because some guy decided to wash blood off his hands one day and then the next, a homeless guy, very probably with mental health issues, either took a dump in the fountain or washed his doody soiled pants in it. 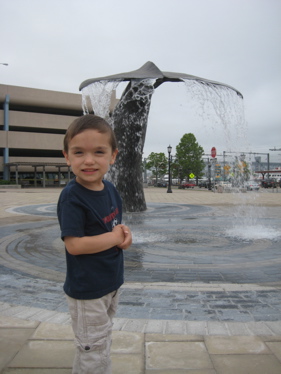 Bottom line: the fountain was shut off for public health issues. The public outcry was as vociferous as it was varied. Some went off on the cost of the fountain (not taking into account that the $11 million price tag was for the whole plaza, not just the fountain. Some decried the state of our society. Some suggested the homeless be herded up and carted away somewhere without public fountains. Heck, even the moronic racists at Stormfront weighed in blaming this incident on “illegals and blacks” somehow (every person I saw down there was white).

This made national and international news! Really? Really. The New York Times had the most measured piece on it while some London tabloid made it seem like guys were lining up to squat in the fountain at all hours. Comments on this story are typical moronic newspaper comments.

What stinks about it all is that a) mental health issues weren’t really addressed here and b) the fountain is now blocked off from anyone going near the water. Yes, it was turned back on a few weeks later but is now inaccessible.

I consider ourselves very fortunate to have enjoyed the whale tail in its intended and original form.