Shh! Order in the Court/Library/Museum!
Hartford (Google Maps Location)
May 12, 2008 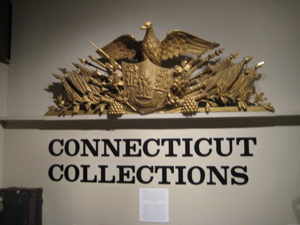 “The big 5-Oh.” “Fitty.” “Still Nifty at Fifty!” Yes folks, CTMQ has made it to the 50th museum plateau with nary a scrape nor defamation suit! While this may sound impressive, any pride is immediately mitigated by the fact that this only marks about the 1/8th point. And, if I were to throw in the “Curiosities”, Geographic points, and the miles of trails ahead of me (ahem, ahead of us, I should say), this milestone becomes virtually moot.

Which is fine with me (especially in light of the fact that as I write this, I’ve actually visited 61 museums so the celebratory aspect of this achievement is nil). Despite being so list driven, I rarely think about the numbers. Oh, I’m sure I will in a few years, but not quite yet. I don’t think Ironman Triatheletes think about the finish line just after they jump into the ocean. 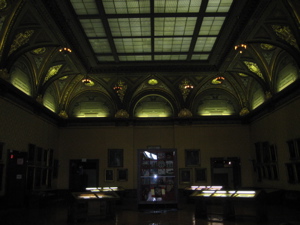 The Museum of Connecticut History sure sounds like it would be one of the top few museums in the state. Housed in the same impressive building as the State Supreme Court (CTMQ Visit here!) and State Library, its pedigree is top notch.

But in reality, it’s a bit of a mutt. The first (massive) room of museum is the “Hall of Governors” (as I decided to call it) and it is impressive to say the least. Here, a portrait of almost every governor in Connecticut’s history hangs on the wall. Yes, even disgraced and imprisoned former Governor John Rowland. Such fresh rosy cheeks on the bum, here below left! There are portraits dating all the way back to John Haynes – Connecticut’s first Governor in 1639. 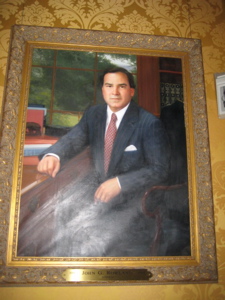 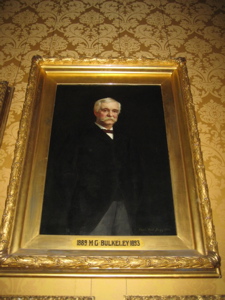 The attached State Library has compiled the roster of Governors and has a blurb on several. Check it out. The Governor to the right, above, is my favorite by far. That’s Morgan Bulkeley whom we know today with the Bulkeley Bridge and Bulkeley High School. But back in the late 1800’s, Bulkeley was the man. He was president of the US Bank. Then became President of local insurance giant Aetna, a position he held continuously over the course of the next several jobs… 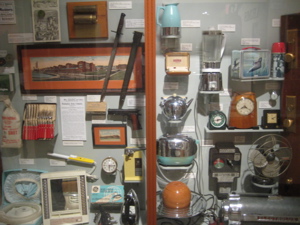 Jobs that included Mayor of Hartford, Governor of Connecticut for two terms, even though he didn’t seek, nor run for the second term. US Senator for the heck of it and oh yeah, started a professional baseball team and became the Commissioner of baseball. He is in the baseball Hall of Fame in Cooperstown – AND he oversaw the committee to build the very building I was standing in.

One last story about Bulkeley – Connecticut went broke when he was Governor, so he “saved” the state by having Aetna loan the state. Aetna, remember, is headquartered in the largest colonial style building in the world (CTMQ Visit here! and happens to be the geographic center of Hartford (CTMQ Visit here!) AND Bulkeley is buried at the coolest cemetery around, Cedar Hill. (CTMQ Visit here!) But enough about the politicians! There must be more to this museum… 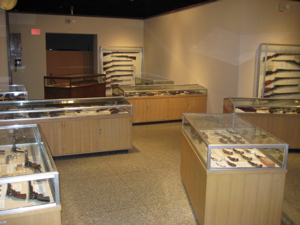 And there is. “The focus of the Museum and its collections is Connecticut’s government, military and industrial history. Permanent and changing exhibits trace the growth of the State and its role in the development of the nation from the Colonial era to the present,” they say. The first exhibit was actually at the entraceway – an ode to Connecticut’s rich art deco past.

What, you didn’t know about that? Yeah, neither did I. Apparently, in the 1930’s, Chase Brass and Copper of Waterbury and a couple other companies including General Electric in Bridgeport produced a bunch of art deco appliances and other “utilitarian items which have come to define CT Art Deco. Here’s proof: 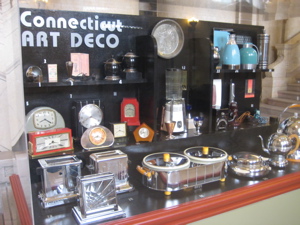 Back in Memorial Hall with the portraits, there are a few other displays, a couple of which are changing exhibits. One is an ode to Connecticut’s 9th Regimen in the Civil War. Long story short, they were gipped out of a monument down in Vicksburg where 150 men from CT lost their lives, but that has been corrected and they’re getting a monument later this year. 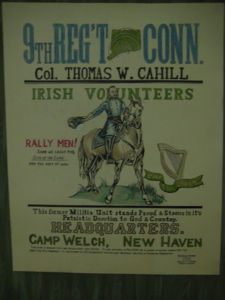 There is also the Freedom Trail Quilt project and the display of the quilts. These represent an acknowledgment by public and private groups of the great significance of the Freedom Trail story within the history of Connecticut and the nation. I do hope to travel the Freedom Trail myself someday, as there are over seventy public and private historic properties that form a network which conveys the dramatic and important story of CT’s African-American experience. These include gravesites, monuments, homes and other structures associated with the Underground Railroad, the Amistad case, and such notables as Paul Robeson, Harriet Beecher Stowe, and Prudence Crandall. Should be an interesting time traveling that “trail.”

(I AM doing the trail and since I wrote the above. Check it out here.

For now, we get a quilt. 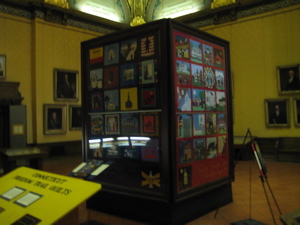 But lo, what else lurks in Memorial Hall? Three words: Charter Oak Memorabilia! We Nutmeggers can’t get enough of the mythical oak, to say the least. It was on our state quarter, and things are named after it all over the place. Charter Oak this, Charter Oak that. Hoo boy, you ain’t seen nothing yet… 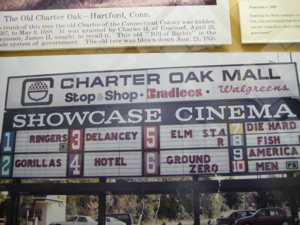 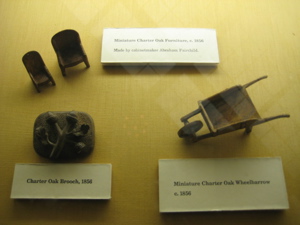 Knick-knacks from its wood! 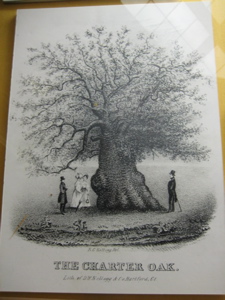 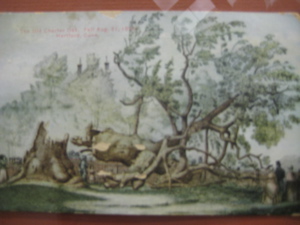 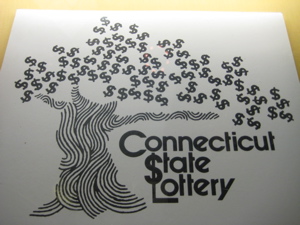 Hey, that’s funny, my picture of former Governor Rowland was taken right after this one. Hmm, there’s a joke in that somewhere…

And of course, dunh-dunh-dunnnnh! The Charter! In an oak frame partially from the Charter Oak! 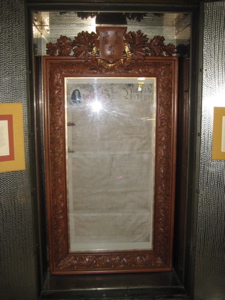 The Charter has been here since 1910 in a fireproof, viewable vault. I’m telling you people, this is our Nikolai Lenin. Our James Brown. OUR Charter!

Everyone instate knows the story/legend. If not, I’ll let the state tell it on their website:

“Deep-rooted in the historic tradition of Connecticut, the Charter Oak is one of the most colorful and significant symbols of the spiritual strength and love of freedom which inspired our Colonial forebears in their militant resistance to tyranny. This venerable giant of the forest, over half a century old when it hid the treasured Charter in 1687, finally fell during a great storm on August 21, 1856. 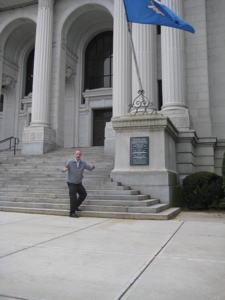 Two English kings, a royal agent, a colonial hero and a candle-lit room are the figures and backdrop in one of the most thrilling chapters of America’s legend of liberty. The refusal of our early Connecticut leaders to give up the Charter, despite royal order and the threat of arms, marked one of the greatest episodes of determined courage in our history.

On October 9, 1662, The General Court of Connecticut formally received the Charter won from King Charles II by the suave diplomacy of Governor John Winthrop, Jr., who had crossed the ocean for the purpose. Twenty-five years later, with the succession of James II to the throne, Connecticut’s troubles began in earnest. Sir Edmund Andros, His Majesty’s agent, followed up failure of various strategies by arriving in Hartford with an armed force to seize the Charter. After hours of debate, with the Charter on the table between the opposing parties, the candle-lit room suddenly went dark. Moments later when the candles were re-lighted, the Charter was gone. Captain Joseph Wadsworth is credited with having removed and secreted the Charter in the majestic oak on the Wyllys estate.

Awesome. How true is it? I suppose as true as we want it to be. The tree was definitely real, and the charter was definitely real. The story is so powerful here that when the thing toppled in 1856, acorns were given to each town in Connecticut to plant “Scions of the Oak” which they did. To this day, most town designate those scion trees in one way or another. Randomly, here’s the one out in New Hartford:

As if people know what a “scion” is.

“Connecticut’s government, military, and industrial history are highlighted in this sampler exhibit of the museum’s collections. Objects related to the early governance of the state include Connecticut’s original manuscripts of the Declaration of Independence and U.S. Constitution, as well as, political signs, buttons, women’s suffrage banners and a voting booth from the early 20th-century.

Connecticut’s military history is portrayed with flags weapons and memorabilia relating to the state’s contribution to American war efforts from the colonial wars to Operation Desert Storm.

Connecticut’s vital role in American industry and manufacturing is a major focus of the museum’s collections. Visitors will see Connecticut-made products ranging from canteens to carbines, stoneware to steam irons, teapots to typewriters, and just about everything else in between. “ 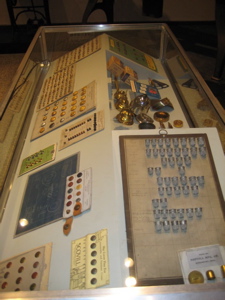 Indeed. Among all the items noted above, were some rather weird and random displays. Notably, a “Lunch Box Panel Sheet” from the American Thermos Products Company in Norwich from 1980. It had “Pigs in Space” on it. I thought to myself, “Why is that here so close to THE GOSHDARN CHARTER OAK!!” How dare they blaspheme the Charter with such banal silliness!

There’s also the Mitchelson Coin Collection: Among the best collection of American coins in the world, the Joseph C. Mitchelson coin collection includes choice examples of every minted coin in the U.S., including patterns and trial pieces. The sampling of American coins on display spans the period from the 17th-century to the present. Included are such rarities as Connecticut’s 18th-century Higley copper token and the ultra high relief 1907 $20 Gold Double Eagle.

I know, I should have saved the Charter Oak stuff for last… but how about a fine collection of Colt Firearms? Throughout the history of American firearms development, no name is more recognizable than that of Samuel Colt (1814-1862). Colt’s genius in both inventing and marketing helped make Connecticut a major center of firearms manufacturing throughout the 19th and 20th centuries. 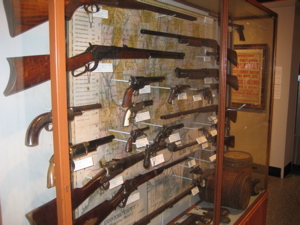 The collection here is considered one of the finest assemblages of Colt-made weapons in the world. There was a gun couple visiting with me who were positively gaga over this stuff. It’s definitely cool and hugely important to Connecticut history, but guns are guns to me. Sorry. (As if you’re still reading down this far!)

And if you are still reading, you get treated by this… the world’s highest urinal resides at the Museum of Connecticut History. I’m a hair under 6’3″ and let’s just say this thing was pushing my limits of comfort. Any guy under, I’d say, 5’9″ simply can’t use this thing. You’ve been warned. 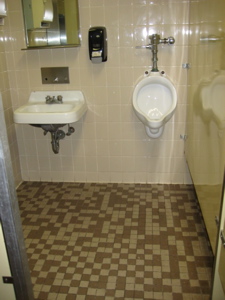 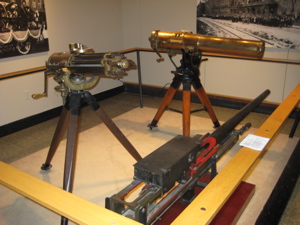