I know… “Animal Farm?! The little novella about talking animals that we all read in 7th grade?” Yes, that’s right. Even if I had read it prior – and I hadn’t – the rules of the Top 100 game that Hoang and I are playing dictate that I would have to read it again anyway. You’d certainly think that I would have knocked this one off back when I was still trying to keep up with the goal of 3 books per year, since it’s so short and simple to read. But alas, you must not know my passion for television. 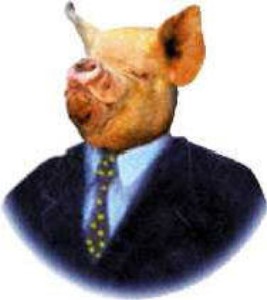 First of all, this book gets major points for being so short and easy to read. Once I finished it, I sat back and wondered what it was that makes it so important and well-regarded. Sure, the allegory works well – but it’s simple. Orwell is of course an excellent writer. But really, is it really that great? In one sense it is; If I were in 7th grade and read this, it would serve as the perfect lesson about literature. (Though Watership Down did the same for me, in much the same way, at a younger age.) And that lesson is that “Words mean things” and literature has a voice.

In the case of Animal Farm, that voice was an angry Orwell speaking out at totalitarian regimes, specifically Joseph Stalin’s in 1940’s Russia. Orwell was actually a socialist, so although many people think the book is railing against all forms of Communism or Socialism, it is not. What I found most interesting was that Orwell went beyond the easy targets (Lenin/Stalin) and hit bullseyes on the West, Hitler, Trotsky, the working class, and the propagandists – all using his talking animal convention.

Since everyone under the sun has read this book (hey, I haven’t even looked at the dust jacket of The DaVinci Code either) there is no point discussing the actual plot. In one sentence, the farm decides to overthrow the dictator (the farmer), the pigs assume that role and take full advantage of it, the worker devotes himself to the farm and dies, there’s a massive slaughter borne of distrust, and the pigs “evolve” into the men they are acting like. It’s pretty good, but didn’t really move me at all like I expected it to.

In a funny way, Animal Farm preceded the Looney Toons and “South Park” in that both used childish language and images to convey much deeper and more intellectual ideas. Seriously.