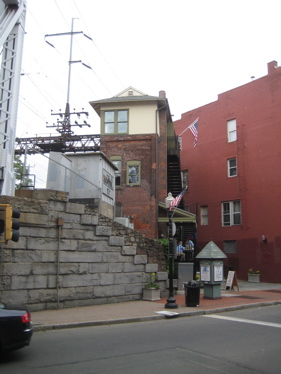 When you’re nearing the end of a day-long CTMQ day of museuming, what could be better than a decidedly quirky little museum to put that pep back in your step? Well, aside from a bite of the world’s most expensive chocolate across the street or perhaps a wooden shoe fitting next door?

Nothing. Nothing at all.

A large part of the fun I have with CTMQ is seeking out the unknown. EVERY museum in the state has SOMETHING new and unique. But it is the rare museum that is entirely unique in and of itself. The SoNo Switch Tower Museum is one such museum.

SoNo, for all you non-Nutmeggers, refers to the revitalized section of Norwalk towards the southern end (i.e., “SOuth NOrwalk”). While not as well known as other cutesy nicknames like WeHo, SoHo or TriBeCa (West Hollywood, South of Houston St. in Manhattan and the Triangle Below Canal Street… Sheesh, you people need to get out more), SoNo certainly has its charms.

And its museums! The Norwalk Museum (CTMQ visit here), the Maritime Center (CTMQ Visit here)… And great restaurants as well. It’s a fun little place – and one that used to be rather crappy and run down. It’s one of those semi-success stories of downtown revitalization through an infusion of cash, credit and yuppie-ism.

Don’t believe me? I can’t think of anything more Yuppie than this, right across the street from the Switch Tower Museum: 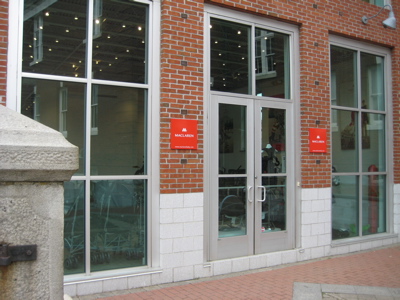 Seriously. A Porsche-like showroom for MacLaren baby strollers. Ahhh, Connecticut… I love you when you fulfill the expected national stereotype. 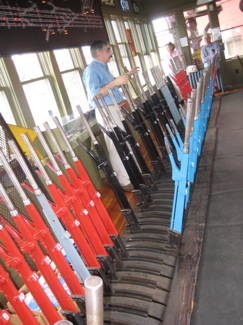 I suppose you’re still wondering what this museum is even celebrating, huh? And I’ll bet you’ll get even more curious when I tell you that out of the 14 or so spots we (Rob, Yvonne and I) hit this day, Rob declared the SoNo Switch Tower Museum his favorite. (Yvonne stuck with the non-museum Patrick Baker & Sons religious store instead.)

Okay, okay… Here goes: This switch tower was a vital part of our industrial and railroading history. The museum explores the story of “Signal Station 44,” all 88 years of it.

A vital cog in the New York, New Haven and Hartford’s main line service between New Haven and New York City, Tower 44 worked hard for the railroad from its opening on July 5th, 1896 until its retirement in 1984! 88 years on the job without a vacation!

The tower provided oversight of train movements and control of track assignments in the Norwalk area between Lowe Street and the Norwalk River Bridge. 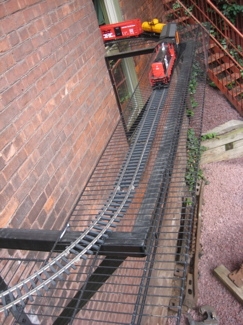 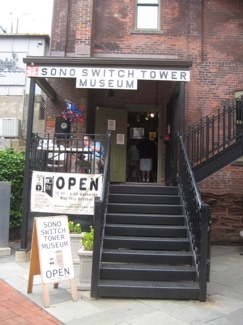 Called Station 44 because it was the 44th on the line out of New York City, the tower also controlled all movements on the former Wilson Point Branch, the original terminus of the Danbury and Norwalk railroad. 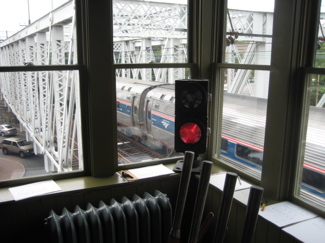 The Museum is furnished as it was during active service in the 1950’s.

The building itself is quite unique. It is three stories high, but only about 20 feet wide. One must climb up the steep stairs on the back of the building to reach the switch tower, but once up there, an important piece of railroading history is right there – totally accessible. And it’s really pretty cool.

Railroads used “towers” to house the mechanism of switching trains from one track to another back in the day. These towers were staffed by operators who would manually operate the switching of the tracks by throwing giant levers in the tower. This prevented trains from crashing. They also housed the mechanism for changing trains from one track to another. A tower operator would operate this mechanism by throwing levers that were connected to the tracks, thus changing the direction of the track. 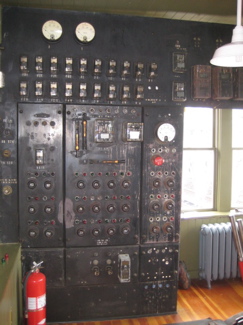 In fact, part of the allure of the museum is that visitors can pull the very same Armstrong levers that moved switches and signals on the Main Line for 88 years – and it’s not easy.

The “sentinel of the railroad,” the “speeding train’s watchman,” and the “railroader’s guardian angel when danger lurks” – the interlocking signal tower has been called all of those things, and with justification.

That work was fundamental: guarding the safety of speeding trains on complex routings, where the danger of collisions was ever-present.

The origination of the switching technology is a fascinating story – and one that led to important advancements throughout industry. The following two paragraphs (“railway interlocking” are the same as the museum’s switches) are from the foreward to , The Classic Railway Signal Tower, written by Bill Withuhn from the Smithsonian: 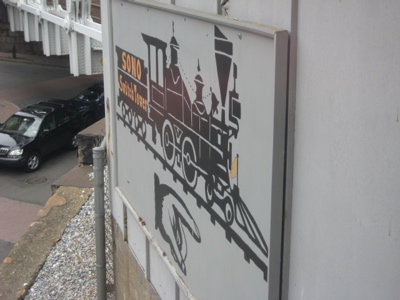 “You have done more than any man living … to save human life.” So said King Edward VII, when he was the Prince of Wales, to one of the key inventors in the story of the railway interlocking, John Saxby. It was no exaggeration. By the 1860s and 70s, trains were running both in the United Kingdom and in the U.S. on growing networks of track, with increasing numbers of rail junctions and crossings of one rail line by another. Accidents at such places were becoming alarmingly frequent. 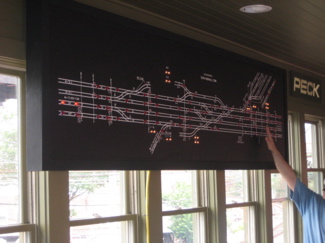 The secret to safety on high-speed railways was – and still is – the interlocking: a rail junction comprising several possible routes, crossings, or diversions, in which it is impossible to send a train on an incomplete or conflicting route through the junction. Impossible? Yes, because the interlocking is one of the first “logic circuits” ever invented in industry. Part of a given pathway can’t physically be set and signals given to show the way is clear unless a complete path is set. How this fail-safe arrangement works is brilliant in its conception. The interlocking is not only a landmark in the history of safe railroading, it is a landmark in the history of the computers that all of us now use everyday.

And seeing this stuff in action is even cooler. The docents were passionate and informed about the history of railroading in the US. They were extremely thorough (but fun) explaining the incredible complexity of the process – and yet how elegant the solution to some of the problems were. Historical photos adorned the walls, but really, the star attraction here are the switches. 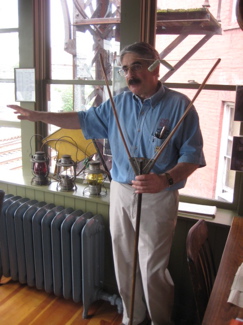 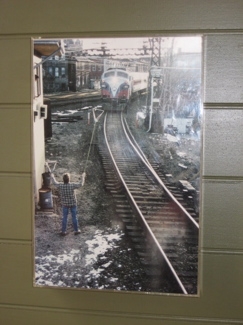 Going down a flight of stairs to the 2nd floor, we were able to see the massive gears that the levers turned, which in turn moved track up to a mile away (note – I have no idea how accurate that statement is. Might be 5 miles, might be 500 feet, I don’t know). 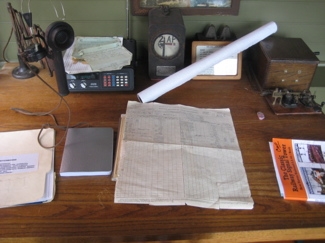 Since the advent of better computers and technology, the interlocking switch system has gone away. Most switch towers have been torn down in the name of progress – and really, the term “progress” is apt here – so these remaining reminders provide a glimpse into the not-too-distant past.

And while up in the tower, there’s a decent chance an Acela or Amtrak train will rumble by below. In fact, there is another exhibit at the museum entitled, “Metro-North at 25,” celebrating the commuter rail line that brings all the billionaire hedge-fund managers in Fairfield County to their Manhattan offices these days.

Artifacts line the walls and a few tables here too; old books, old lights, an old Hancock air whistle… but the coolest thing was (what I call) an old note-catcher. Engineers would pick up and drop off notes at the switch houses using this long pole – sort of like a modern day Grabber that the elderly use – as they whizzed on by. They’d give instructions to the switch towers as to where they were heading so they knew which switches to throw.

The SoNo Switch Tower Museum should be a part of you day in Norwalk. Heck, just across the tracks and I-95 there are three more museums I didn’t even mention yet – and one is a rather excellent children’s museum called Stepping Stones. (We did visit later.)

Bottom line – there is more than enough to do within easy walking distance for one and all. Choo-choo. 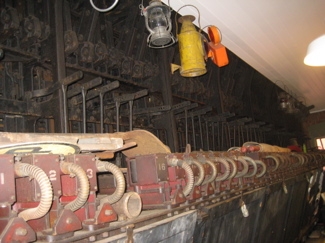 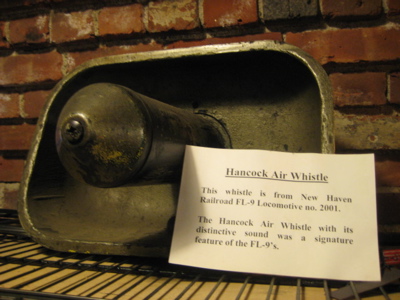