Thank you, thank you. I’ve had a lot of rather excellent titles over the years, but this may be my favorite. It just stinks that most people over the age of 50 or so won’t get the reference. Oh well; their loss. (Another loss is my lack of pictures… the low lighting and glass casing made it difficult, but you can see more at the links below.) 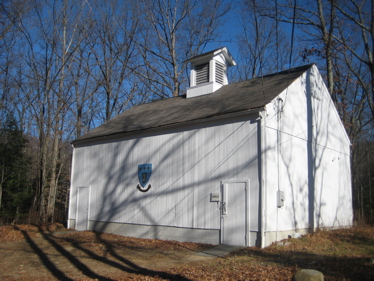 For those of you heathens who are unaware, a crèche is a depiction of the birth of Jesus as described in the gospels of Matthew and Luke. Some are simple table top affairs that most of our Christian grandmothers pulled out every December. Others are larger outdoor displays in front of churches and then there are the live nativity scenes wherein children in bathrobes and fake beards freeze for a few hours each year.

Then there are the rare ones like this absolutely beautiful crèche in Bethlehem. No, no, I didn’t travel to the Holy Land… Bethlehem, Connecticut which – more by pure happenstance than divine ordinance – happens to be where the Regina Laudis Abbey is located. Though maybe the abbey chose Bethlehem because of its name, I don’t know.

(I do know that Bethlehem revels in its pseudo-holiness. You can read more about that here, when CTMQ visited Bethlehem’s unapologetic Christmas Town.) 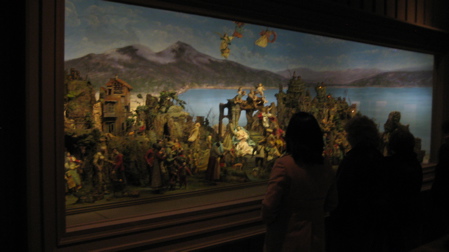 The abbey celebrates Christ all year round though, not just at Christmastime. Nuns tend to do that. In fact, this crèche is open all year round and it really is worth a stop in to see. It is located in a restored barn north of the abbey itself, but there are signs off of Flanders Road for the crèche. Once onto the road, you can park and take a nice stroll to the barn or brave the very bumpy road to park right at the door.

The barn itself has its own story, from the abbey’s website:

The Barn once belonged to Joseph Bellamy, one of Connecticut’s earliest and most distinguished ministers. Miss Caroline Woolsey Ferriday, whose family acquired the Bellamy property in Bethlehem, Connecticut, presented the Barn to us. It is a rustic structure perfectly suited for the ambiance of a Christmas Crèche. The Barn has undergone a complete restoration as part of the project, including the construction of a new, climate-controlled display area for the collection.

I should note that Bellamy’s house, just up the road a pace near Bethlehem’s stoplight, started America’s first theology school. His house, now known as the Bellamy-Ferriday House, is also a museum (CTMQ Visit here). 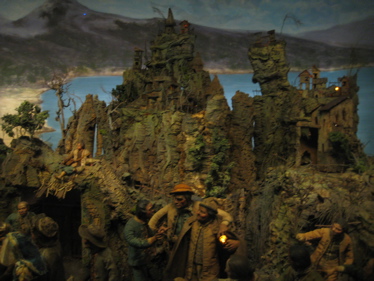 We arrived at the barn and I guess I was a little surprised that there were other visitors. Once inside the completely darkened room, I knew why: This thing is pretty darn awesome. The display, which is 16 feet long and 6 feet deep, recently underwent a 3 year conservation/restoration project. It is considered an 18th-century Neapolitan crèche. The Crèche was given to the Abbey in 1949 by Loretta Hines Howard in memory of her husband. Mrs. Howard also gifted the Metropolitan Museum of Art with a similar Crèche some years later, one that is famously the centerpiece of the Museum’s Medieval Galleries every Christmas.

Several art and museum professionals associated with the Metropolitan Museum of Art volunteered in the restoration of this thing. Rather impressive helpers for such an out-of-the-way collection, to say the least.

The Abbey Crèche is thought to have belonged to Victor Amadeus the Second, King of Sardinia and is believed to have been presented to him on the occasion of his coronation in 1720. After his death in 1732, it became property of an Italian family of the nobility until it was brought to America in 1948. 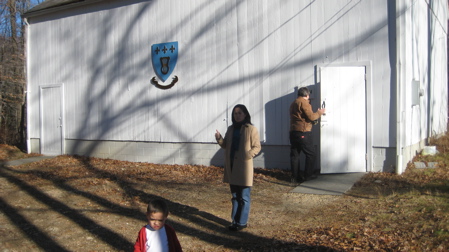 That’s just crazy! That sounds almost impossible to believe, but what do I know? Let’s get some details from the abbey’s site:

The Crèche, a remarkable ensemble, contains 68 figures between 14-16 inches high. The figures, made of carved wood, terra cotta, porcelain and jute, are situated in a small village made primarily of the bark of cork trees that evokes the local surroundings of the Neapolitan artists of the time. Dressed in their original 18th-century costumes, the figures vividly portray, in addition to the Holy Family, children, old and young women bearing gifts, merchants and peddlers, a princess and her whippet, angels, the Three Kings and peasants and their farm animals. Because the figures have retained their pristine historical condition, having been spared any prior restoration that would compromise them, the restoration of the Abbey’s Crèche is making an important contribution to the body of knowledge available to the public and to art historians concerning materials, technology, methods of fabrication and art-historical context. 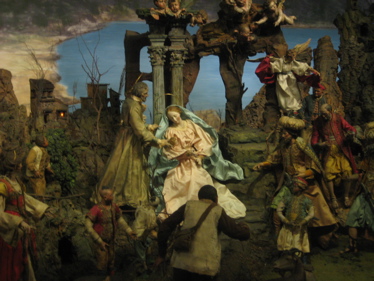 There are some interpretive signs in the barn and one delves a bit deeper into the figurines stating, “Each one reflects some human attitude toward the Mystery of the Incarnation, from adoration to ambivalence, from curiosity to distraction, from surprise to oblivion allowing us to see the diversity of human response to the world-changing Event in the particularity of the Neapolitan scene.” Wow, that was quite a sentence.

The landscape, as you can see, is decidedly non-Nazarene. But who cares, it looks much cooler than a flat desert. I don’t know what Hoang was expecting, but she seemed rather impressed by the whole thing. Damian even enjoyed himself in the rather cool barn. He ran around with delight; why, we often don’t know, but we’ll take it. The older folks who were there for more spiritual reasons seemed to enjoy Damian’s antics as well, despite the somewhat holy setting. 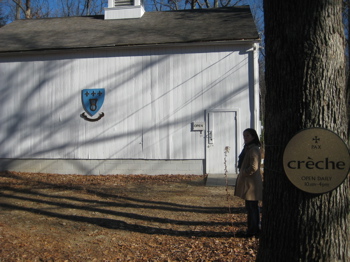 Turns out that the abbey says that the crèche “Invites us to reflect on and contemplate anew the perennial and universal question: What Think Ye of Christ? Well, for now, I think ye has a pretty impressive piece of art devoted to him in the hinterlands of Bethlehem, CT.