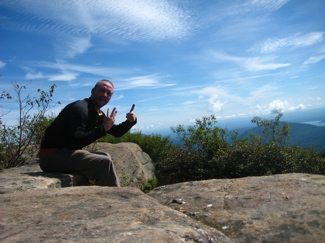 I certainly chose a great hike for my first foray into the Catskills. I had already nabbed the highest peak (Slide) and had just come down off of Cornell’s summit (the 9th highest) on my way to my third climb of the day, Mt. Wittenberg. Wittenberg is only the 14th highest of the Catskill peaks, but its outstanding views make it the most popular of all the summits. In fact, the Catskill Mountain Guide claims it sees over 35,000 hikers per year.

And there I was, navigating my way through the Bruin’s Causeway between Cornell and Wittenberg, having only passed two other hikers all day. A day which, as you can see from the pictures, was absolutely perfect.

The hike down from Cornell Mountain had its share of difficult sections, notably the few vertical ones that required some definite thought before forging ahead. But the hike up the southern flank of Wittenberg wasn’t too tough at all. In fact, I was on top before I realized it, gaping at the expansive beautiful view east.

The view takes in a few mountains on the Catskills 3500 list including Friday Mountain, Balsam Cap, Peekamoose, and Table. The giant Ashokan Reservoir dominates the view. It was built in the early 20th century and is the beginning of the aqueduct system that provides water to that little town called New York city. 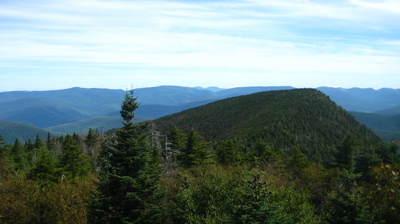 Amazingly, I had this view all to myself. It was beautiful on two levels – one, as you can plainly see here and two, in the rare solitude I had up there. For a place that is fairly easily accessible from the “other” (north) way, on a perfect day, it was pretty crazy that I was alone. I tramped around the summit, finding a comfortable spot to just sit and enjoy myself up there. And, of course, to rest up for the return trip back over Cornell and Slide on the way to my car.

The return hike was no joke, as the ascents back up those two mountains involved several vertical pitches. But I had found my hiking legs and made pretty good time. Once back on top of Slide, I met some very experienced hikers and had a good long talk with both of them before my final descent to the car. The idea of a 2+ hour drive home wasn’t so fun – heck, I’d rather struggle up a few mountains than make that long drive, but it wasn’t too bad. 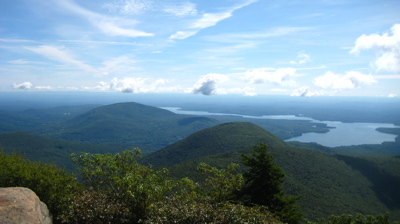 The view from Wittenberg

I had thought about bagging one or two more peaks before the drive, but the long talk I had on top of Slide sort of made that less of a possibility. Oh well, those mountains aren’t going anywhere – until maybe 2012 when the Apocalypse swallows them whole and buries them under the Atlantic Ocean.

My drive wasn’t bad at all. In fact, I even had the energy to make stops at the oldest public library in the United States in Salisbury, and two stops along the Connecticut Freedom Trail in North Canaan and Norfolk.

My first trip to the Catskills was a resounding success and I can’t wait to get back there soon.