Where Goldfinches are Made of Real Gold
Greenwich (Google Maps location)
May 8, 2010

[2018 Note: I will likely do a rare revisit of this place. I still have to hike its trails, and will likely have Calvin with me, and he’d enjoy it. It’s so nice that I think you’ll agree – better pictures are warranted.]

It’s so ridiculously rich that I cannot describe to you without sounding like I’m lying or just copying from a bad novel about blue bloods. Goshdarn Greenwich. 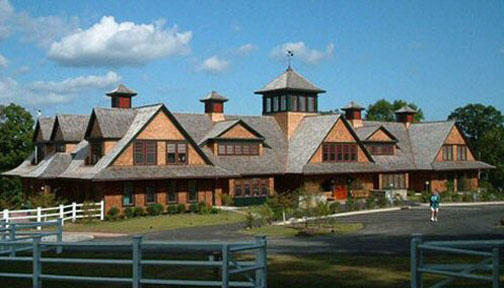 I’ll give it this: Away from the extraordinary wealth of the coastal Greenwichers, over towards the New York border, the mansions and manors are much more tasteful and people do seem to enjoy their privacy rather than the ostentatious shows on the Long Island Sound. I was out for a day of gawking and museum-going with Rob C, veteran friend of CTMQ.

We had successfully found the westernmost point in Connecticut and had navigated our way through the lifestyles of the rich and famous over to the Audubon Center, nestled deep in the “country,” so to speak. I cannot imagine how much their land is worth here… Billions upon billions of dollars I’m sure. It’s nice that they have neighbors like Tommy Hilfiger to help support them. 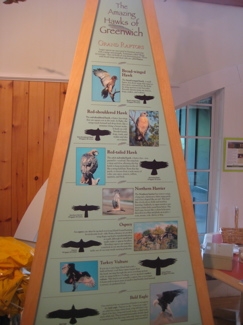 The building itself is as beautiful as you’d expect. Faux-rustic, sure, but that’s okay in Greenwich. I imagine all the other Audubons around Connecticut are a bit jealous of these guys down here. Well, the Fairfield one is really pretty nice too… But look at that building! Freaking Greenwich.

Rob and I arrived while some meeting of birders was going on. There was a very nice spread of breakfast items that, although we never mentioned it, we both were salivating over. We both resisted the urge to snag some croissants and instead focused on the exhibits. My oh my this is a lovely Audubon Center. 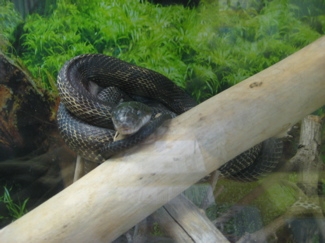 The Audubon Center in Greenwich opened in 1942 as the National Audubon Society’s first environmental education center in the United States on land donated by Eleanor Clovis Reese and H. Hall Clovis. The 295-acre sanctuary has approximately seven miles of trails that lead to a hardwood forest, old fields, lake, streams and vernal ponds. Reminders of the past are the stone walks, an old apple orchard and original New England homestead buildings.

Hm. I wasn’t aware of its status as the first Audubon center in the US. That’s pretty cool… We also didn’t walk the trails because it was raining and well, because we had a full day ahead of us still. 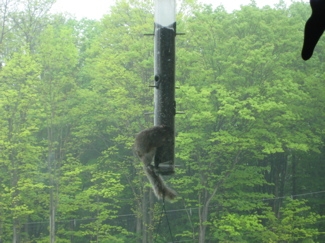 Remember when I mentioned Hilfiger is a neighbor? I wasn’t lying. I never lie. 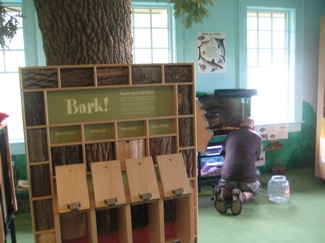 The Center seems to focus heavily on the various hawks and raptors around Greenwich. I don’t begrudge them that – No one loves lesser-known hawks more than I do. They have a cool set of hanging birds above the entrance and a very nice display about the various species. The hawk-heavy theme continues around the entire first room: A display about Hawk Mountain in Pennsylvania (I’ve been there! Several times!), and another fine one showing the hawk migration patterns in the eastern US. 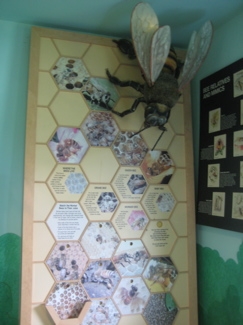 The Center serves as the site for the Quaker Ridge Hawk Watch and is one of the best locations in the Northeast United States to view the fall migration of raptors. The all time record of 30,000+ broad-winged hawks counted in one day has not been matched in the region, even at Hawk Mountain, PA. Golden and Bald Eagles, Common Ravens and Black Vultures have also been spotted. Classroom and field workshops are offered to develop identification skills. A Hawk Watch Weekend Festival is held each September.

Cool. There’s a random black snake and some mighty fine giant walking sticks in this initial room, as well as a fairly weak set of taxidermied animals like a coyote and a heron. They seem to be sort of afterthoughts here in Greenwich, wherein they often take center stage at some of the other Centers. 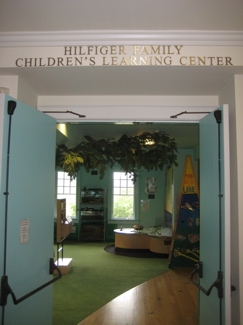 One must pass through the gift shop to get over to the Hilfiger Children’s Learning Center with hands-on nature activities and interpretive natural history exhibits.

It’s a nice space and I kind of wished Damian was with me, as there were a bunch of fun and even funny activities for kids. Their live animal displays were strangely lacking though. Just a couple painted turtles and some local freshwater fish. However, since most other Centers have plenty of animals, Greenwich seems to focus on other types of exhibits. 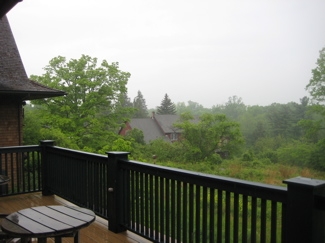 It is here, over towards the large viewing windows of the birdfeeders and meadow below, one can learn more about the prettier songbirds of the area. We watched the feeders for a while and marveled at the squirrel who somehow managed to jump onto one. Rob pointed out a grackle which I noted was a “crap bird.” Rob reminded me that he lived in an apartment in Brooklyn so anything other than pigeons and crows qualify as mildly exciting.

(For the rest of us, I did see a nice redwing blackbird in the bushes below.)

There really was a lot of cool activities for kids here. Damian would have had fun for at least an hour – and that was before we entered the slightly trippy “Web of Life” exhibit. 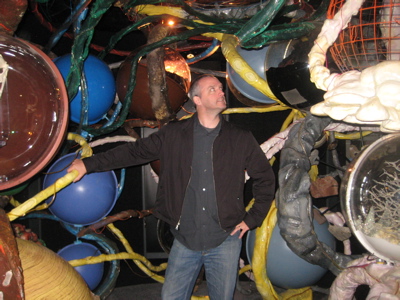 Me, in the Web of Life

It’s tough to really gain an appreciation for this thing through my pictures. It is a monument to creative museum exhibit construction. The rare piece that appeals to everyone between the ages of 2 and 100. There is an ample amount of educational material here explaining how “the web of life” really works. All of evolution’s buzzwords are used (ie, “diversity,” “adaptation”), but I’m not sure they actually use evolution as an explanation for the way things are which is unfortunate. 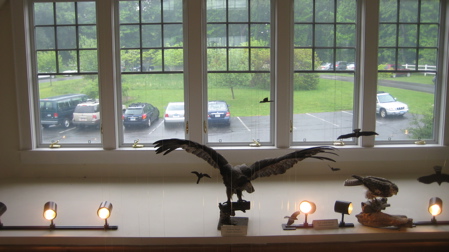 Anyway, there are plenty of bells and whistles in the room and even flashing lights for the toddler set. But the star of the show is without question the talking earthworm. His voice is slightly grating, but HE’S A TALKING EARTHWORM! That pops up out of the fake dirt and tells you all about what his role in the ecosystem is.

It’s awesome, creepy, funny and informative. I’ve been described as the same… Rock on animatronic earthworm. 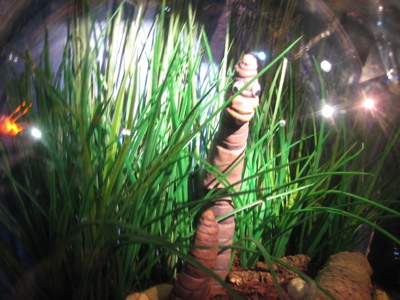 Wandering back around towards the gift shop, there are some cool displays on why having certain animals as pets is a bad idea as well as a good description of our local trees. The variety here for kids is very nice.

This Center is very new (built in 2003) and surely well-funded to boot. Perhaps that’s why they boast of being a “Green Building.” 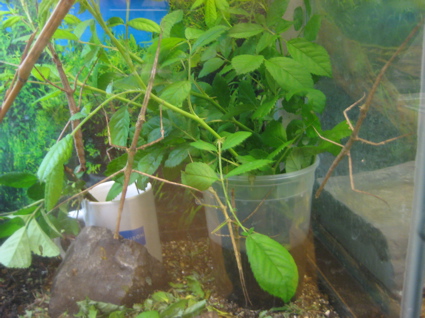 At Audubon Greenwich, the earth heats itself and cools the building, taking advantage of the constant year round temperature (about 54 degrees) of the ground four feet or more beneath the surface. A liquid—chemically similar to antifreeze—is pumped underground into a grouping of pipes (made from recycled plastic). Liquid colder than 54 degrees is warmed, and liquid hotter than 54 degrees is cooled, both by the surrounding earth. The heated or cooled liquid (depending on the season) passes through the closed loop into the building, which it heats or cools, as needed. That precise need is determined by computer-operated controls.

Rob and I popped upstairs to check out the wildlife viewing platform, but it was closed due to the rain. Oh well… next time. 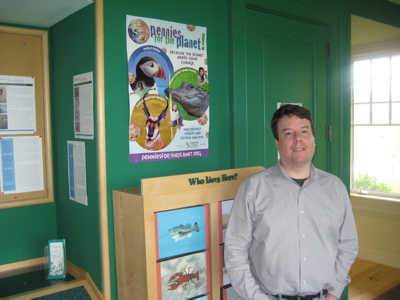 Rob is smiling next to a puffin picture because his girlfriend’s last name is Lunde which is the Norwegian word for puffin.

Greenwich has to be considered the crown jewel of Connecticut’s Audubon Centers. And I can’t really disagree with that, but each and every one has its own unique charms and worthwhile qualities.

Even if Tommy Hilfiger doesn’t live next door in a 50 million dollar summer house. #@^$#$% Greenwich.