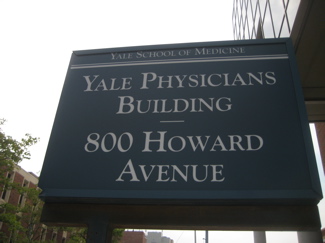 No, this isn’t a museum. Not even close. But since I recently opened up my CTMQ definitions to include non-commercial galleries, I’ve been able to check out some interesting and different types of what I still loosely call museums.

Artplace is in downtown New Haven, very near a bunch of more legitimate museums. So if you need to see those heavyweights, fine, ArtPlace won’t care. But depending on the exhibition on display here, you may want to make the effort. But there’s a big caveat to viewing the art at ArtPlace. 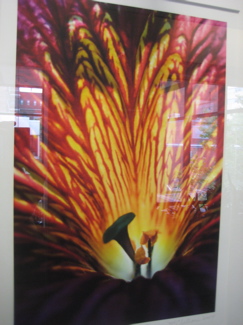 It is located through the five floors of the Yale Physician’s Building. Oh no, this isn’t a building with a bunch of classrooms and auditoriums, no. This is like a mini-hospital, full of the sick and the infirm, coming in to get real care. For some pretty hardcore ailments as well. I don’t know why, but I didn’t think that’s what the building was all about. I don’t know what I thought, exactly… But I didn’t think I’d be searching out artworks while stepping around dudes with prostate cancer and women with diabetes.

I can’t exactly complain… I mean, I don’t have those issues. All I was doing was taking pictures of art. In various waiting rooms. Being stared at by sick people.

Why? One reason: My man Kevin Van Aelst was one of the featured artists at the current exhibition, titled, “Exhibition XVI.” Nothing high-minded about that; the next one will simply be XVII. They have more important things to worry about around here. 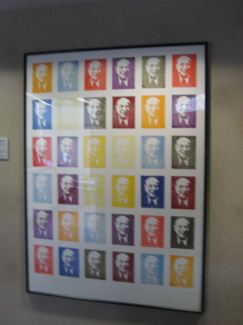 I not only parked right on the next block, but I scored a meter with 13 minutes on it already. Major New Haven win – city which seems to employ more meter maids than all other cities combined. I added a dime and made my way to the building. It’s a pretty nice looking building; a mix of municipal functionality with a hint of glass and steel modernism.

I entered and two security guards stared at me. I wasn’t a Yale doctor. I wasn’t infirm. They raised their unkempt eyebrows. “Can we help you sir?” they asked.

“Um. Maybe. I’m interested in checking out some of the art around the building.”

I’m not sure what I expected in response; a chuckle? Snorts? A “you gotta be kiddin me?” I feared I wouldn’t be able to just walk around, as it had now become clear to me that this was more or less a large medical facility. “Oh, sure, go right ahead,” one said, “it’s all over the place, on every floor. Knock yourself out.” Great! I was off and on my way to find me some germ-covered art. 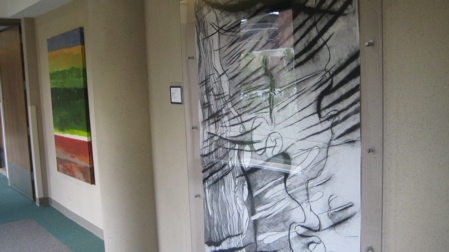 (I couldn’t shake the feeling that those guards watched my entire visit on their little security monitors, wondering what the heck I was doing. And that would be fair, I guess.)

I took the stairwells at the ends of the floors. Nothing against sick people or doctors, but I just felt better about taking the stairs. Once on the second floor, I came across the first brilliant piece of art I’ve seen in a while. It’s apparently part of ArtPlace’s permanent collection, because the artist (Jennifer Newton) isn’t part of the current exhibition. I can’t anything online about her or her art either, which bums me out. 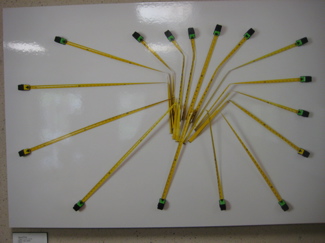 Her piece, “Dr. Mel Color Chart” borrows (okay, steals) from Andy Warhol’s famous prints of Marilyn Monroe and others. But to do it with Dr. Mel Goldstein! I love it! (For out-of-staters, Dr. Mel is THE iconic weather guy in Connecticut. He’s maybe 114 now, but still plugging away on the air.) By the way, you can Warholize your own pictures here. But you’re no Dr. Mel.

Then I saw it… My very first Kevin Van Aelst piece! This is why I came here. Van Aelst is a very, very clever photographer who creates inventive scenes from humdrum items. He’s a small scale (usually) Andy Goldsworthy – perhaps my favorite living artist – working with things like human hair, apples and rain drops.

(The following evening, Van Aelst gave an artist’s talk up at Real Art Ways in Hartford where he had another exhibit going on. I met him and had a nice chat with him there, but also checked out the rest of the galleries – CTMQ Visit here.) 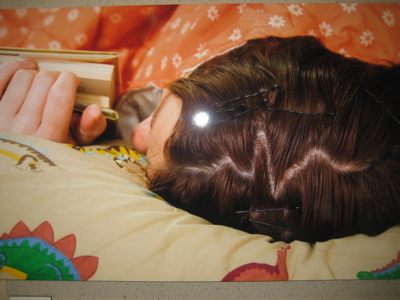 That’s a heartbeat depicted in her hair.

I was mainly at ArtPlace to find his works. They are everywhere, all over the building. I didn’t get up close and personal with them all because, well, because a bunch of them were hanging over the heads of sullen husbands and their worried wives in alcoves with bleak blue signs denoting things like, “Prostate and Urology” and “Alzheimer’s and Dementia.” I respected the patients and certainly didn’t barge into those areas snapping pictures willy nilly.

While talking to Kevin at RAW, I mentioned how incongruous this exhibit was and how strange I felt bounding about, happily looking at art. He laughed and told me that Yale edited his exhibit. While many of the pieces on display where somehow related to medicine and/or the human body, a few were missing. Notably, this one of the digestive track done in what appear to be silly putty and other such harmless materials. Why? “Because some people who come here no longer have their full digestive systems.”

Oh. Okay. I get it. But even so, there were still plenty of arresting and interesting works of Kevin’s throughout the building.

I’d like you to take a moment to click on the following – a few choice works selected by me from Kevin’s site. Note, Kevin does not use any digital manipulation on his photos at all. It’s a shame that he has to make this point time and time again – and more of a shame that many people simply don’t believe him. Anyway, check this out:

Just a regular ol’ blue shopping cart? No, it’s blue tape on a wall.
Just a regular ol’ bar of soap with a box on it? No, that box is actually human hair. Kevin called this his most absurd work that he sort of created as a joke, but people seem to like it.
Learn cloud types the Van Aelst way.

I’ve saved my favorite for last. Here it is, titled “Chromosomes”: 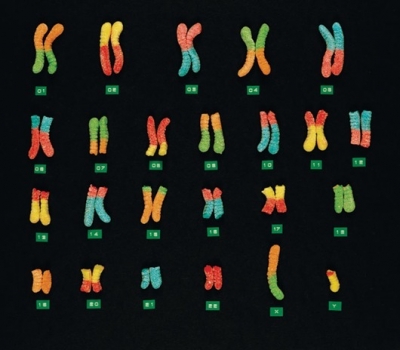 I think I’m going to buy a small print of it. Not to take it too far, but a) it’s just beautiful and creative and b) to me, it shows just how fragile our genetic makeup really is. Seriously, it’s as fragile as a bunch of delicious sour gummy worms. Trust me, I know – what with a son missing a piece of his 17th chromosome and all. (Click on Damian tab above to learn more.) 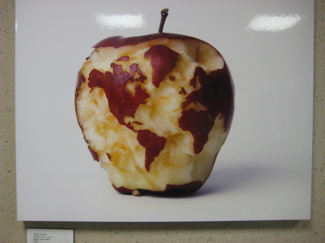 While it appeared to me that Van Aelst dominated the building, it was probably only because I was looking for his stuff. The exhibit also featured paintings, works on paper, photographs and sculpture by Melody Lane, Joan Levy, David Morico, Anita Soos, and Eddie Toores.

The exhibition features new work by six regional artists who create “artwork that heals” – so you see why flaunting large intestines in front of those without them might not be so “healing.”

In addition to the Van Aelst stuff, highlights include: new landscape paintings by Joan Levy; mandalas and clay sculptures by Melody Lane; color field paintings by David Morico; charcoal drawings and photographs by Anita Soos; and an installation of travel photography by Eddie Torres. 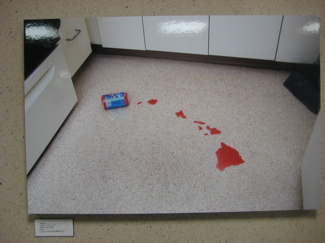 “Over the past 10 years, we have accomplished our main mission: to increase the quality of care for patients and staff by exhibiting annually rotating group exhibitions of compelling art that integrate color, hope and creative sources of meditation into the clinical environment,” said Terry Dagradi, director and curator of Art Place Exhibitions.

David Morico’s color field paintings really jumped out at me as being quite good. Levy’s landscape work really isn’t for me, but there’s definitely a lot of talent behind her work.

In the end, I didn’t really have to visit ArtPlace to feel complete. But I’m glad I did… I really hope the patients there take note of the art and perhaps gets a little smile out of it. 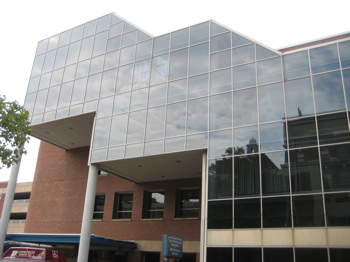 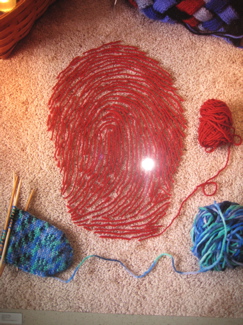 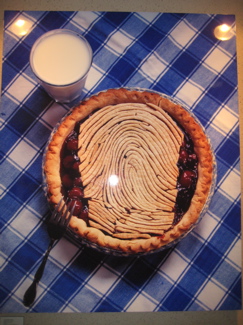