CTMQ > Everything Else > National "Stuff" > NHL: Lafayette B. Mendel House

I collected this NHL during a full day of CTMQ’ing in and around New Haven. At the time I snapped my picture, I had no idea who Lafayette Mendel was. As it turns out, he was a pivotal force in bringing the study of nutrition into the scientific realm back in the early 20th century. I really should attempt to learn more about Mendel, because as hokey and sketchy today’s vitamin and nutrition world is, it was worse back then. 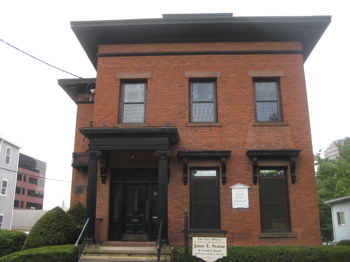 The Italianate house was designed by famous New Haven architect Henry Austin and was the home of Yale University physiology professor, Lafayette Benedict Mendel from 1900 – 1924. It was declared a National Historic Landmark in 1976. The building now houses a law firm.

Mendel was known for his work in nutrition including the study of Vitamin A, Vitamin B, lysine and tryptophan.

Mendel studied classics, economics and the humanities, as well as biology and chemistry at Yale University and graduated with honors in 1891. He then began graduate work at the Sheffield Scientific School (which was part of Yale, and still is but not called the Sheff anymore) on a fellowship and studied physiological chemistry under Russell Henry Chittenden. Oh yeah? You mean the guy whose former house is ALSO a National Historic Landmark? Absolutely. (CTMQ Visit here)

Mendel finished his Ph.D. 1893 after only two years; his thesis topic was the synthesis of hemp-derived protein. Hippies hadn’t been invented yet, however, and Mendel’s work was not celebrated.

He became a full professor in 1903 with appointments in the Yale School of Medicine and the Yale Graduate School as well as Sheffield. Mendel wrote over 100 papers with his longtime collaborator Thomas B. Osborne of the Connecticut Agricultural Experiment Station (Mendel also had an appointment at the Station). In their early work, they studied the deadly poison ricin albumin from castor beans. 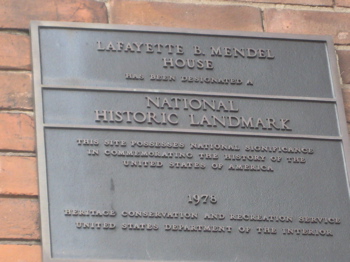 Wait, you mean at the National Historic Landmark Connecticut Agricultural Experimental Station? Absolutely. (CTMQ Visit here). And if you want a little more detail on Mendel’s experiments, you can read this page which is also about the CAES, but different.

Their most important work involved the use of carefully controlled studies on rats to study the necessary elements in a healthy diet. They discovered Vitamin A in 1913 in butter fat, as well as water soluble vitamin B in milk. They showed, for example, that a lack of Vitamin A in the diet led to xerophthalmia. They also established the importance of lysine and tryptophan in a healthy diet.

Mendel wrote many articles and published Changes in the Food Supply and Their Relation to Nutrition (1916) and Nutrition, the Chemistry of Life (1923).

Mendel received many honors during his career. He was made Sterling Professor at Yale in 1921. He was the first president of the American Institute of Nutrition. He was made a member of the National Academy of Sciences in 1913. He won the gold medal of the American Institute of Chemists “for his outstanding contributions to chemistry” in 1927. He won the Conné Medal of the Chemist’s Club of New York “for his outstanding chemical contributions to medicine” in 1935.

Well there you go. The house is a bit boxy for my tastes (as are all Italianates), but I hope those lawyers inside are aware of and proud of the former inhabitant.