Finally, in the 3rd year of our Top 100 project, I completed my first book… A book that most 8th graders are required to read. I may have been required to at one time as well, but I know I never read it. For all I’d heard about the book over the years, I was still unprepared for the brutality within. I knew the general story; a bunch of British kids become stranded on a deserted tropical island and they learn to self govern and survive in varying ways. And I knew one kid was named Piggy. 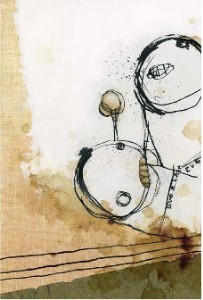 That is pretty much the book, except for the “beneath the surface” story, where we come to learn a bit about human nature and our more primal instincts. Social strata are always evident, with the dorky Piggy always getting picked on (“So everyone picked on Piggy and everything was suddenly back to normal”) and the alpha males (Jack and Ralph) competing for power and followers. I’m sure high minded critics pick and pull apart the story to absurdist levels, and this book lends itself well to that. It also works on a corny 8th grade book report level about themes and symbolism (Piggy’s glasses represent man’s intellectual nature, and as they slowly break apart through the story, so does the rational nature of the boys, ultimately being stolen in the end as one group of boys fall completely to the mercy of their animal nature).

There were some really well written passages, such as Simon’s descent into madness with the “Lord of the Flies”, his eventual murder, and the final confrontation between Ralph and Jack. I was also interested in Roger, who seemed to be the worst of the thugs — the one who murdered Piggy and tortured some others. Sure, these were just kids, but Golding, it’s obvious, meant for them to “mean” much more. Written just after WWII and the start of the Cold War, it is a treatise on differing ways of governing, of the hunters vs. the pacifist intellectuals. With no clear cut “winner,” Golding leaves the debate somewhat open. The hunters, with their blood caked faces and loincloths controlled the island and the fire by the end, but they became cold blooded murderers. The others, dwindled in numbers and without meat or fire, still maintained their sanity, though a couple lost their lives. Rather interesting paradox, no?

To me, as a liberal pacifist, I was struck by the reign of terror that Jack led… Yes, his hunter charges followed his every command, but they were constantly fearful. Ralph, who led a more democratic type tribe with assembly rules and thought out plans worked for a while, but taking action was sometimes held up by rules and regulations.

Ultimately, in the end, Ralph’s idea for rescue (smoke) succeeded… But only because Jack’s hunters had lit the forest on fire in order to kill Ralph. The dopey animalistic hunters succeeded in creating smoke for rescue, but that wasn’t their true intent. After writing this in 10 minutes, I’ve come to realize Lord of the Flies is an excellent book which leaves the reader with plenty to think about.