Not every museum in Connecticut presents itself upfront as a museum. And we all know that I lump a lot of places under the museum umbrella that totally aren’t what one typically refers to as a museum. 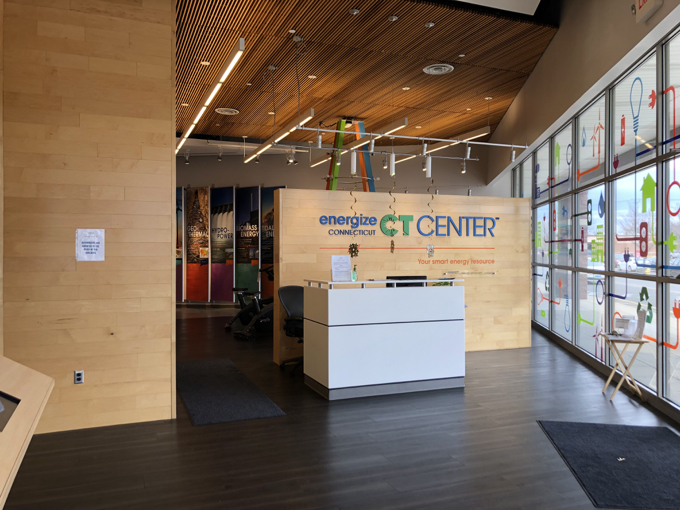 But the Energize CT Center in North Haven does bill itself as a museum. And in fact, upon entering, the women who greeted us said, “It’s like a museum!” Okay, yeah, she said “like a museum,” but that’s more than good enough for me.

Away we go, Calvin! This is

… an energy efficiency resource center and a hands-on learning laboratory for children, the Energize Connecticut Center offers educational tours, seminars, special events, and the latest energy efficiency and renewable technologies; all focused on teaching Connecticut residents and businesses how to use energy wisely without sacrificing comfort or style. 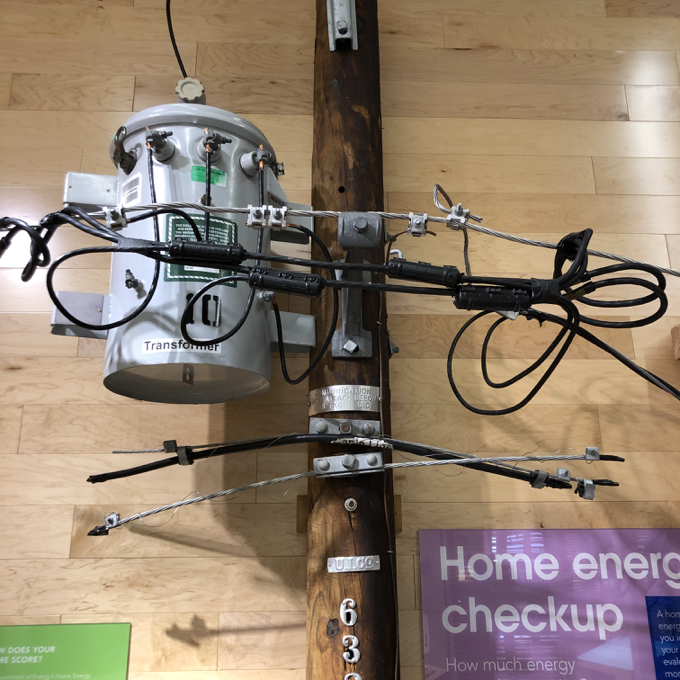 Seriously, that sure sounds like a museum to me. And this place sure looks and feels like a museum. And – oh, what’s that? They have more to say?

The Center is an interactive, professionally staffed facility that combines displays, educational tours, and a resource center to educate and empower the residents of Connecticut about energy. Exhibits showcase the benefits of energy efficient choices, including: cost savings, comfort, convenience, sustainability, and environmental impacts.

Cool, but you pretty much just said that. You’re wasting energy! And I was just going to – more? You have more to say?

Through guided or self-guided tours, visitors will learn about: energy sources, electricity generation, the important role energy plays in daily life, and ways to use energy wisely. In the resource center, visitors can learn about programs and financing available to implement energy efficiency and renewable solutions in their home or business.

Man, The Energize CT Center really wants to be billed as a museum on CTMQ. Okay. You’ve got it. You’re the 412th museum in Connecticut I’ve visited! Now can you let me and Calvin poke around already?

Hey, Calvin, go put some work in on that exercise bike. 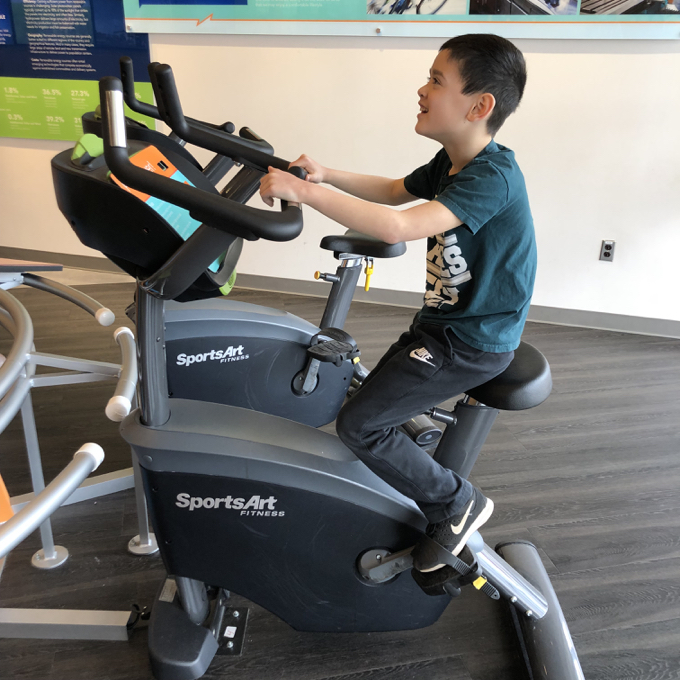 Good work. He lit up the top rung of lights and learned that it takes work to create energy. Or, to put it another way… 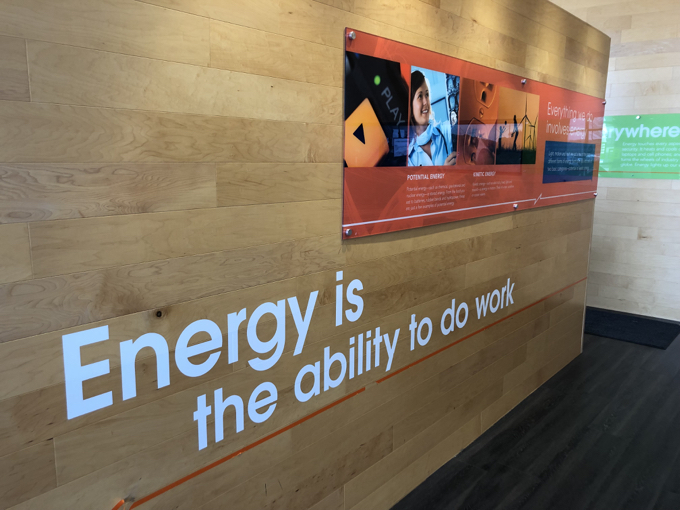 Someone did put a decent amount of work into this place. I imagine it mainly exists for local New Haven County school trip kids to come and learn about electricity and energy efficiency. I also imagine those aren’t the most exciting field trips for those kids. The Energize CT Center is in a strip mall among strip malls next to box stores near box stores.

But A+ for effort; the place is gleaming and clean and really does do a good job at disseminating some important information. As for the kid-focused stuff, there’s nothing really groundbreaking here. Like, there’s the plasma ball that you’d expect. Just a warning for those of you with “packemakers.” 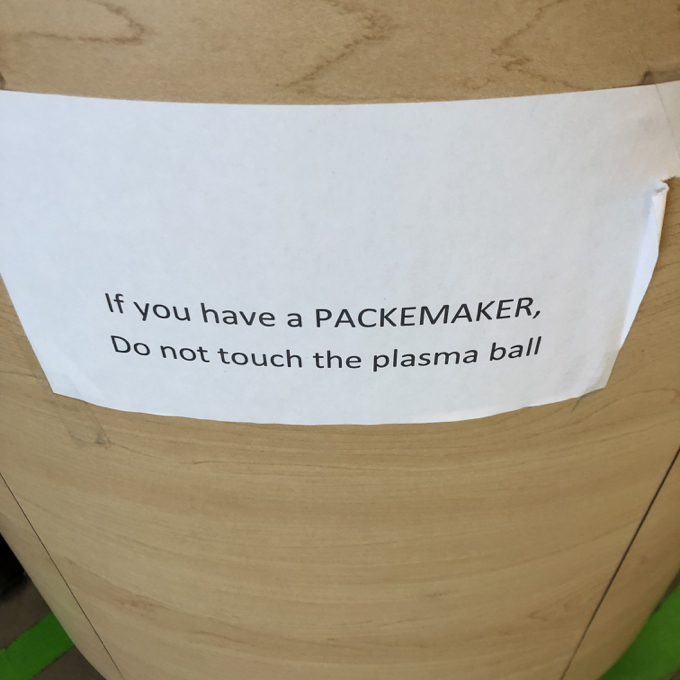 And there’s the mock power grid control room thing where the goal is to manage increasing energy demands on a hot summer’s day in Connecticut. I imagine that nearly 100% of people who listen to the (very, very long) introduction and proceed with the exercise do what I did and try to overload the system as quickly as possible to see what happens. 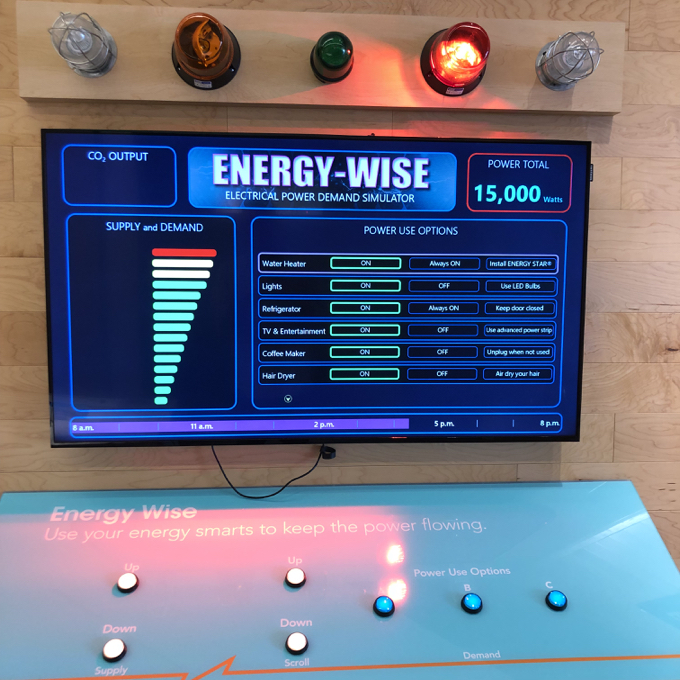 Spoiler alert: nothing happens other than the red siren light swirls quietly around. You’d think a statewide brownout would get a bigger reaction.

There were some informative signs regarding “phantom loads” which is something I’m horrifically guilty of allowing in my house. But so are you. All of you. The idea here is that all those machines that now rule our lives; TV’s, WiFi routers, computers (the sign here says VCRs which is kind of funny in 2019), etc., draw electricity even when “off.” At least my house is net 90% solar through the year, so I’m okay with the situation as is.

Here’s a picture of an impossibly attractive couple enjoying what could only be their online utility bill: 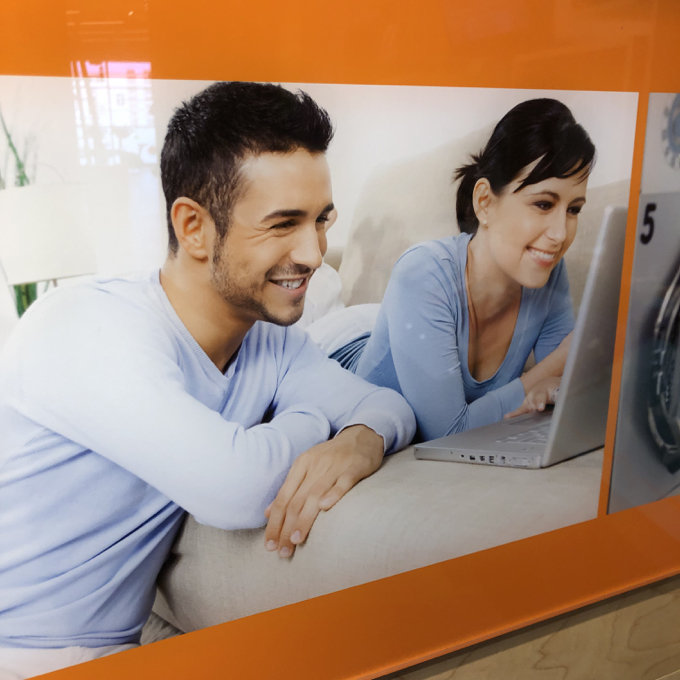 And here’s a picture of two young models loving the fact that they can check their homes’ temperature from afar: 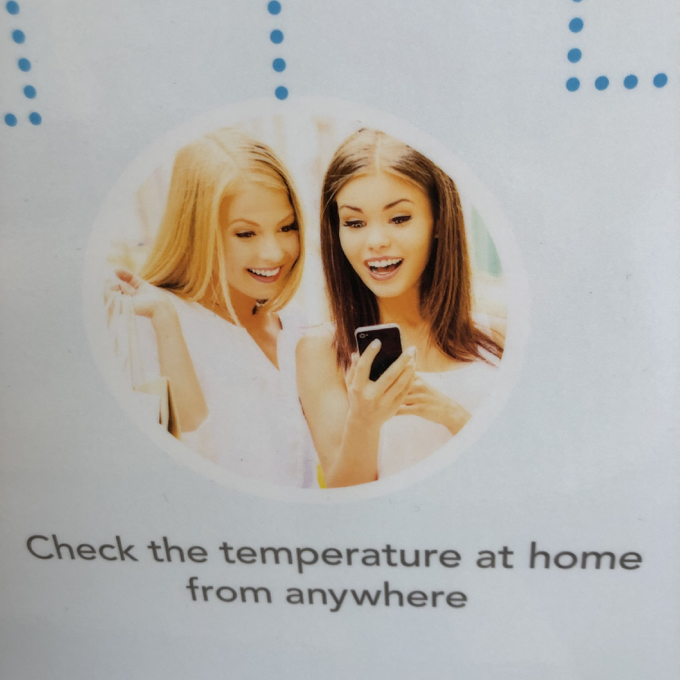 I don’t know about you, but such modern miracles give me endless joy. Anyway, let’s get back to Calvin who was busy testing the 50 or so different lightbulb types: 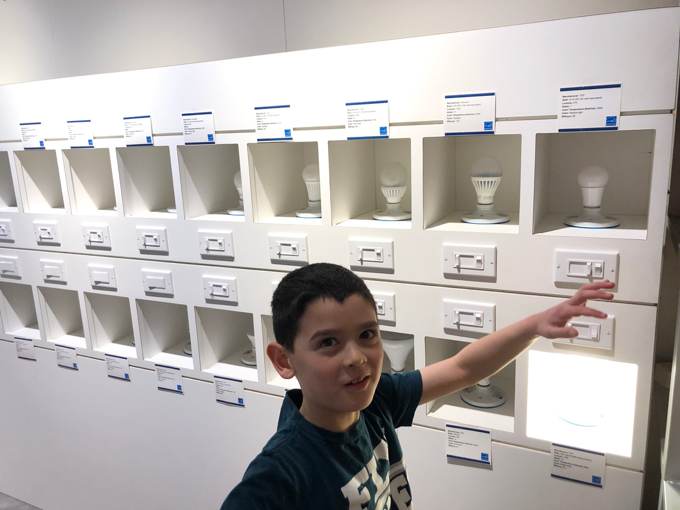 He of course turned them all on while staring into the bulbs and wondered why his eyes hurt for a bit. Kids are much smarter than adults often give them credit for being, but they’re not that smart.

No better way to get past eye pain than to “crank it up.” Another “energy requires work” exhibit. 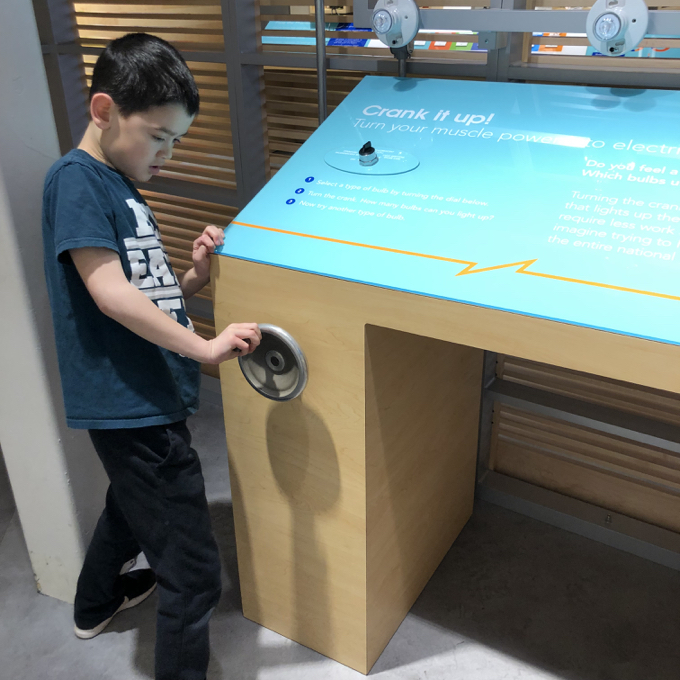 Meanwhile, I was all about “Energy Jeopardy,” which wasn’t framed like “Jeopardy” at all. There are questions on the tiles, not answers. Yes, this actually did bother me a bit. I have this thought that the Energize CT Center’s creators sat around a table and there was some person there like me saying, “Jeopardy doesn’t work like that,” and then they all had a drawn out annoyingly circular argument about how to frame the tiles. 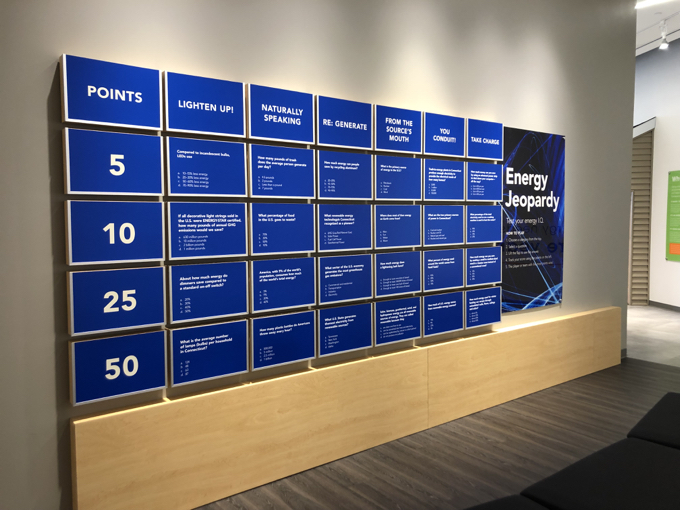 The incorrect contingent won out, unfortunately.

Other sections here explain a bit about solar energy and high efficient water heaters and all the other things you’d imagine – if you were to actually imagine what would be at a place like this. Which would make you weird.

I tried to get Calvin to learn a few things; mostly stuff he “knows” like how to turn things off when not in use – but refuses to do with any sort of regularity. 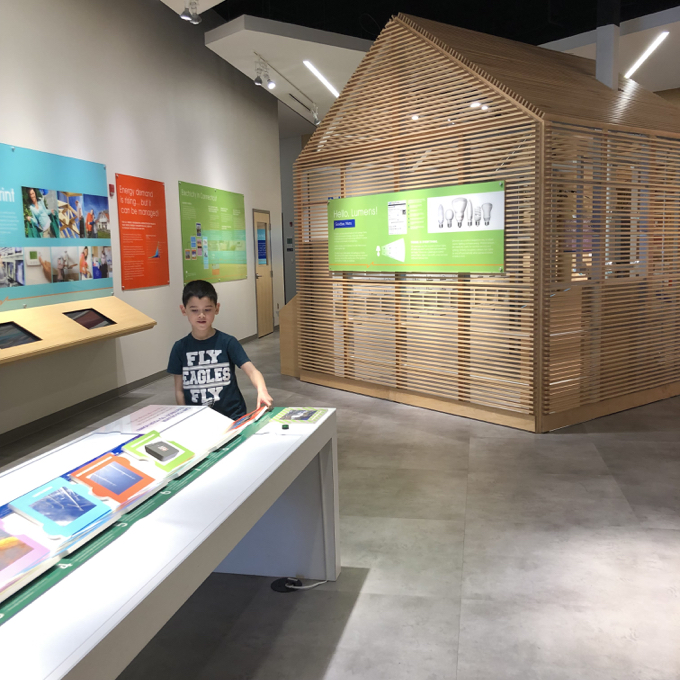 And I’m sure I could have learned more than a few things if I took the time to do so. At least the Center answered the age old question I’ve had regarding washing dishes. Water/energy spent doing it by hand vs. water/energy spent by dishwasher? I’ve often thought about this while letting the hot water run forever as I am sure to sanitize every plate and glass… 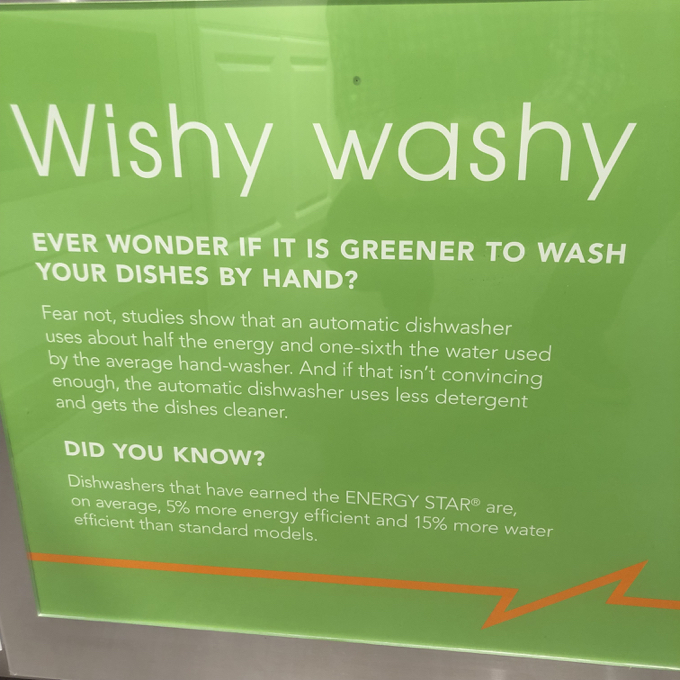 … which now I don’t do anymore thanks to my visit here! Seriously. We run the (new, high efficiency) dishwasher at least 1.5 times more per week now. It’s true, the Energize CT Center has changed at least one behavior in the CTMQ household. And I thank them for it; while I sort of like washing dishes, I like saving money even more.

One thing the Center is missing, in my opinion, are any dire warnings about the impending end of the world via climate change. Perhaps I just missed it, but one would think that part and parcel of using less electricity is lessening emissions from power plants. 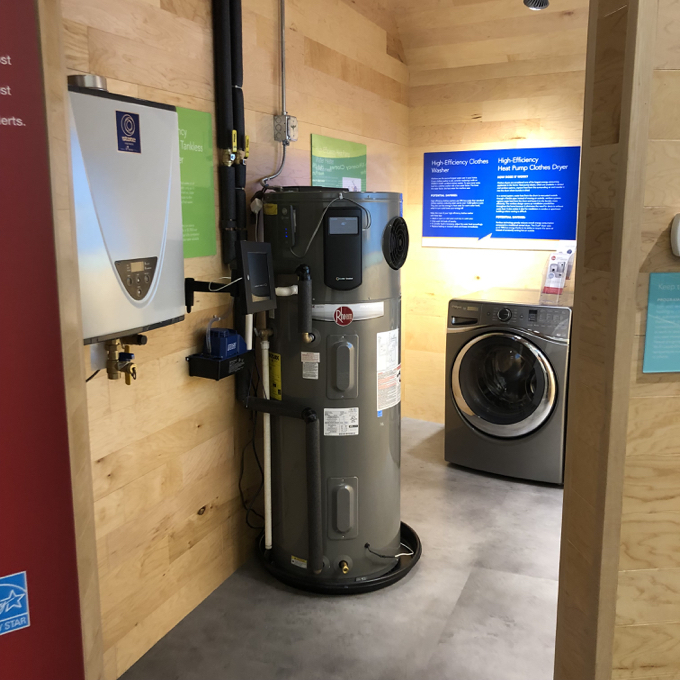 This little museum-like place is singularly focused and well done – aside from the Jeopardy gaffe of course. As I said, I’m sure it functions as an educational school trip almost exclusively, and random school vacation father-son trips there are very few and far between.

But that doesn’t mean you shouldn’t pop in! I got a free nightlight that uses next to no electricity and had to turn down a(nother) canvas tote bag. Between us, I can’t stand what the utility companies are doing to solar customers like me – jacking up our “delivery costs” and trying to eliminate net metering over and over again.

Because the billions they make isn’t enough, apparently. I must admit that I can’t be the biggest cheerleader for this gleaming pro-utilities joint. 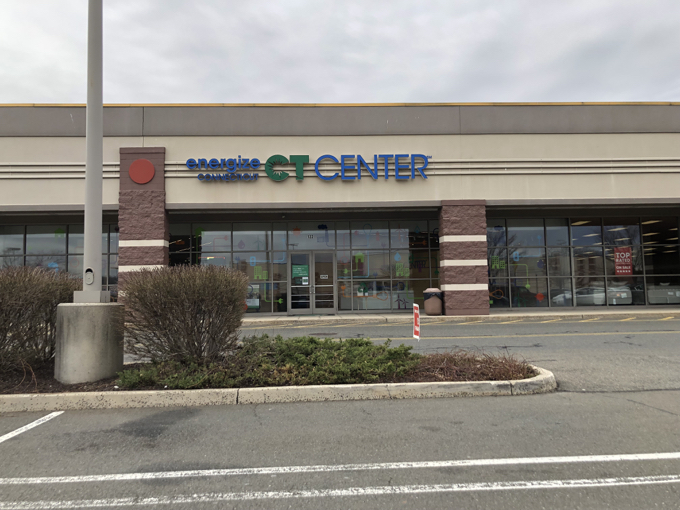