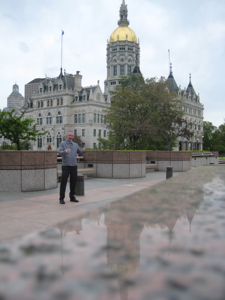 What did YOU do with YOUR last half-day off from work? Golf? The beach? Nap? Bah – My son had a doctor’s appointment around lunchtime so I decided to take a half day to enjoy the finest capitol building Connecticut has to offer. I never envisioned that there would be a bonus “Legislative Offices Self-Guided Tour” as well. (Followed afterwards by a peek in the State Supreme Court and the Museum of Connecticut History across the street!)

First, I must digress. The English language is maddening. I am a state spelling bee champ and read and write fairly extensively. Yet… I still had to double check “capitol” vs. “capital.” How stupid is it that the building is the “capitol” but the city is the “capital?” (And yes, I know it’s spelled wrong in my title, but that’s just me being me.)

With Damian back at daycare napping, and Hoang home working, I went to the Capitol. (Another thing, when do I capitAlize capitol? If ever? Okay, I’ll leave it alone.) The capitol offers the only free parking in Hartford for visitors – and isn’t too far from some downtown hot spots for crafty free night time parking – which is nice.

The building is beautiful. Way cooler than some other state capitol buildings I’ve seen. Here are two random ones, Washington and Oregon (two good ones to know when engaging in the ol’ “Name the State Capitals” bar bets I’m sure you all take part in. What? You don’t? You’re missing out.) 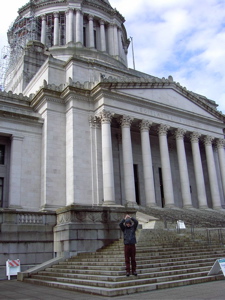 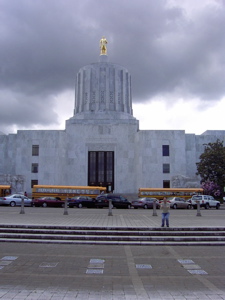 You can’t really see in the above pictures (chosen because they are right at the beginning of my 8000 photo library) but Hoang and I used to do a thing where we’d do state-specific nonsense at state capitols. In the Washington one I’m wearing brown pants and a green jacket with my arms in a point above my head – to represent the Evergreen State. In the Oregon one, Hoang is actually bent over chewing on a stick – for the Beaver State. Ahhh, we’ve had some fun.

And Oregon looks like a trash can, by the way.

Before entering the building, one can tour the impressive statuary outside. This includes the statues on the capitol lawn, the many on the faÃ§ade, and others around the capitol dome. You can grab the self-guided tour book to help you out – and I’d recommend it. It really is very interesting. Of course, the building itself stands on the hill in Bushnell Park – the oldest public park in the country. (CTMQ Visit here.) 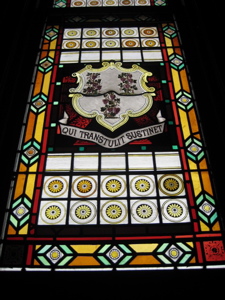 I won’t burden the reader with too many facts, but it bears mentioning that the building was designed by Richard M. Upjohn and was completed in 1878; having been completely restored between 1979 and 1989. Each side of the building has a theme and each theme is represented by statures and something called tympana. There are currently nineteen “statues in niches” around the building, with room for more.

I recognize some of those names from my experiences… and know I’ll learn a few more as I continue. The informative booklet just taught me that this last guy, Ellsworth, came up with “The United States of America” because he was too lazy to write each of the states back in the day. There are a bunch of other “tympana” (these are scenes of moments in stone) and “medallion heads” as well as 12 more statues on the lawns. They are all mostly honoring war dead but there is one with a pretty unique little quirk. 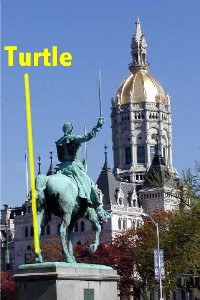 The Marquis de Lafayette statue out in the middle of the road in front of the capitol (in Lafayette Square, actually) has a little turtle on the pedestal. According to the booklet, “The true meaning is unknown, but the turtle reportedly may refer to the lack of speed in which the artist was paid or the slow progress the sculptor made towards it’s completion.” However, Friend of CTMQ and Connecticut guru Dick Hemenway wrote, “The story is that the artist, Paul Wayland Bartlett, became frustrated with the time it was taking for the city to get the statue mounted on the pedestal. He added the turtle for its symbolic value, and, I understand, the work was completed very shortly after. The turtle remained.” You decide.

Let’s get inside already. Sheesh.

Security is surprisingly lax at the Capitol. In fact, it was non-existent. Sort of like our current Governor, so maybe it’s symbolic. (Ha!) It’s all a very simple affair; walk in, follow the sign to the right, go to the right, pick up the self-guided tour booklet, orient yourself, and go! My favorite kind of tour…

The building is littered with Connecticut history and historic figures. First, I ran into good ol’ Nathan Hale, our State Hero. He’s got plenty of presence around the state that I’ll be discussing elsewhere. Next, sort of hidden away, are these, on the right: 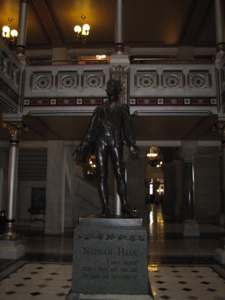 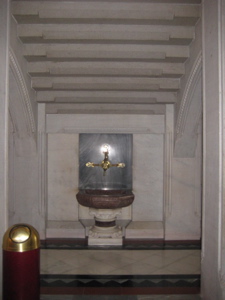 These marble and brass fountains were used in the late 1800’s to fill buckets for legislators’ horses that were tied to the back portico. Cool. Proceeding to the north lobby, I found the USS Connecticut’s figurehead; this was from one of the “Great White Fleet” ships that sailed the world on a goodwill mission from 1907-1923. 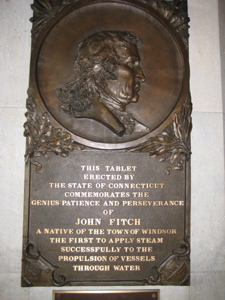 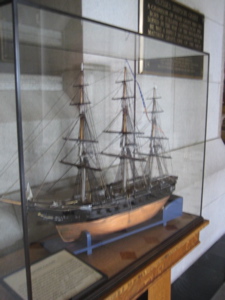 I did not know that fact on the left. Now we all do.

Much more importantly, there stands the Cannonball Tree Trunk! This tree (below, left) is from the Battlefield of Chickamauga on the border between Georgia and Tennessee. Even though half of the participants died in that battle, no one from Connecticut did. In fact, no one from Connecticut was even there; except, apparently, an interior decorator named E.S. Yergason. Strangely, he removed the tree trunk, shipped it a thousand miles, and donated it to the state of Connecticut to “show the horrors of war.” Boy, videogames have sure jaded me. 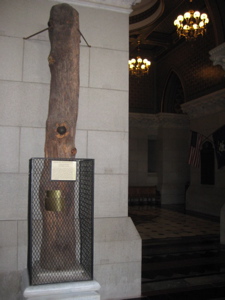 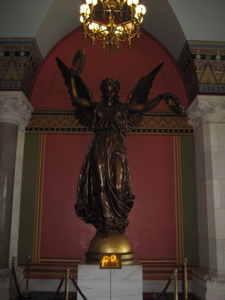 Continuing onward, there a model of the Flagship Hartford and a restored plaster model of the “Genius of Connecticut” (above, right). I don’t get the name, but the original bronze statue (from which this was cast) stood atop the dome, high above. There is also a Hall of Flags which contains battle flags from the Civil War through the “War on Terrorism” which I’m not quite sure has officially been declared, but what do I know? There are some other statues and plaques and things, but I must make special mention of the Hotchkiss Revolving Cannon.

This thing was designed by Connecticut engineer Benjamin B. Hotchkiss. The US Government wouldn’t buy his design, so he opened up a plant in Paris and ended up selling it to the Spanish government instead who mounted. Then, luck would have it, we went to war with Spain (Spanish-American War). Total traitor, right? 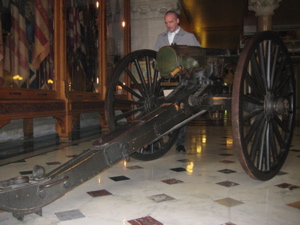 Right. Except during a battle in Cuba the ammunition for the cannon exploded, running the ship aground and allowed US forces to capture the ship. A smart alec US captain sent the cannon back to Connecticut with a note thanking our state for the contributions it made towards US Victory. (Later, the US bought the improved designs and bought lots and lots of these things.) 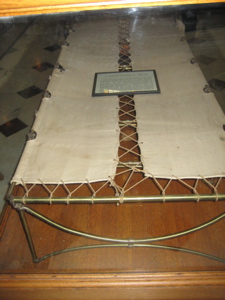 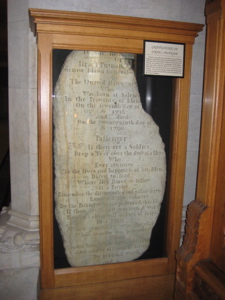 The Hall of the House of Representatives can only be accessed with a tour guide, but decent pictures of it can be taken from the Capitol Tours website. Notable: the original desks are still used. The silver urn is not, however, still used as shared drinking water source. 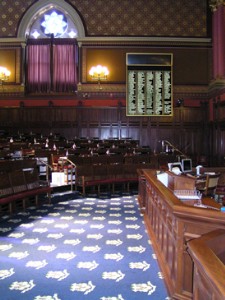 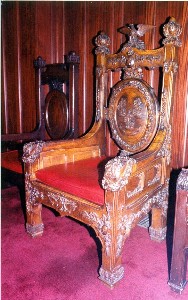 The Senate is a bit more exciting as it includes the Charter Oak Chair (above). This chair was actually carved from the fallen oak tree which hid the self-governing charter given to the colony by King Charles II in 1662. If you follow along these reports in order, prepare to be sick of the Charter Oak soon enough. But more on that in another museum write-up; for now, just know that the Lieutenant Governor presides from this thing and that the recent former Lt Governor Kevin Sullivan (now President of the Children’s Museum in West Hartford) wrote me an unsolicited nice email today. And He sat in this chair. So there. 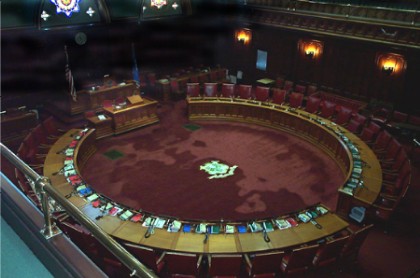 I also stood outside the Governor’s office for a bit and saw no work being done. I could have done this for the past four years and not seen any work being done, however. The inside of the dome is pretty cool – the interior of the dome is hand stenciled and in the center is a chandelier in the shape of an eight-pointed star. Outside, it is covered with gold leaf that is 3/1000 of an inch thick and rises 257 feet above the ground. It is surrounded by blue Carrara marble statues representing Agriculture, Commerce, Education, Law, Music and Science. 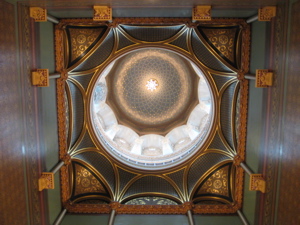 I really enjoyed my visit to the Capitol building. It’s free, no one hassles you, the complete randomness of the collection is interesting to say the least and really; it’s really pretty. Furthermore, there is also the attendant Legislative Offices Building Tour which no visit to the Capitol is complete without – also free! CTMQ Visit here! 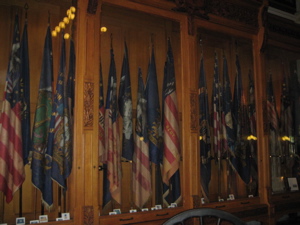 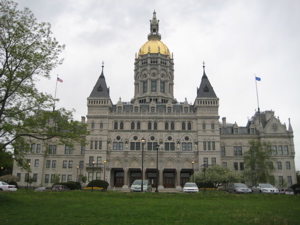