This place has changed quite a bit since 2008 and is now open as part of regular tours. Looks like I”ll have to revisit someday. 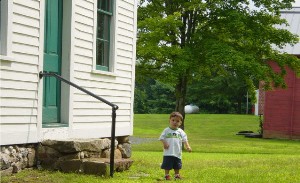 Granby, Connecticut. Famous for… err… Famous for my friends Lisa and Tim? Famous for being the town bordering the Southwick Jog? Yeah, I guess. Granby is also home to the Coolest Tree in the state, if not the world.

Another great feature of the rural northern town is, of course, the Salmon Brook Historical Society’s enclave of museum buildings. There are four such buildings gathered together here, though not all began life at this location. One such building is the original Cooley Schoolhouse. 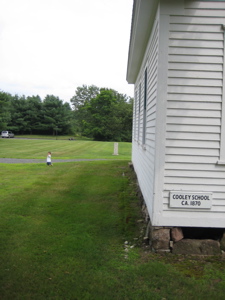 It’s not open for tours to galoot’s like me, but really only for the annual kids’ field trips. Even though I had just spent a good deal of time with the President of the local historical society (below), I was not granted access. Undaunted, I peered into the windows and even touched the building itself. 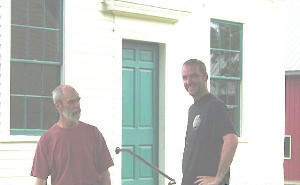 The coolest part about the schoolhouse today is that the outhouse is in it’s original location relative to the school. Looking north at its original location, one would see the school, the stone obelisk demarcating the Massachusetts border, and then the outhouse. I can only think that this was Granby’s thoughts about losing the square acreage of the Southwick Jog to the Bay State – that is, “We do our business on you, Massachusetts!” Jerks. 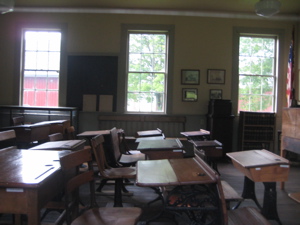 Here’s what the SBHS website (which is where I took the below picture from as well) says about the school:

The Cooley School is the only remaining one-room schoolhouse in Granby which has not been renovated into a home or shop. It was built c.1870, on the corner of East Street and Cooley Road in North Granby. At that location, the school and woodshed were in Granby, while the outhouse was in Southwick, Massachusetts.

After 1948, when the one-room schools in Granby were closed, the original furniture was auctioned off. The blackboard, however, remained intact, with some of the last teacher’s writing still on it.

In 1972, the school was given to the Salmon Brook Historical Society by Merrill Clark, whose mother had taught at the school. In 1980, the Society moved the school to its present location at 208 Salmon Brook Street.

A 19th century schoolroom has been recreated, with a wood stove, water bucket and dipper (shared by all), an 1855 Connecticut map, and the mandatory picture of George Washington, as well as books and desks once used in Granby District Schools.

Visiting school children once again sit at the much-used desks (complete with carved initials), open the readers and geography books, and write on the waiting slates. 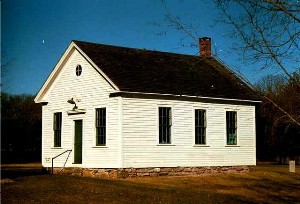 Once I was done with the other three buildings (The Colton-Hayes Tobacco Barn, The Abijah Rowe House, and the Weed-Enders House), we (my family, Tim, Lisa, and her three daughters) looked towards the angry sky and hit the road. While this picture looks like any other of impending rain, I can report that all of us noted that the clouds were moving in a circular fashion towards the northwest. It was, quite honestly, rather creepy. 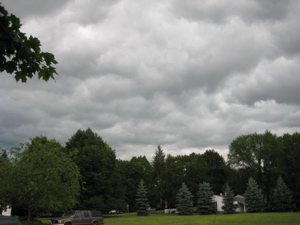 So creepy that it made Damian’s hair stand up! 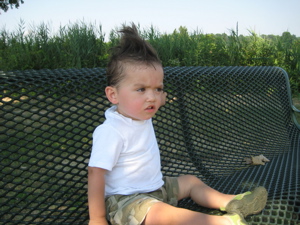 Okay, that picture was taken on a different day in a different town, but I wanted to work it in somehow. Because when Damian is old enough to go to school, something tells me he’ll want to rock a mo – or possibly faux – hawk at some point. That’s how the boy rolls.