I bought these boots for my Appalachian Trail thru-hike in 1997. They were the first generation Asolo boots with Gore-Tex and were the lightest on the market at the time. In fact, I broke them in for my hike by playing basketball in them for a few months. They were wonderful – until the tread wore out. Then, ironically, they became as slippery in snow/wet as a pair of loafers. 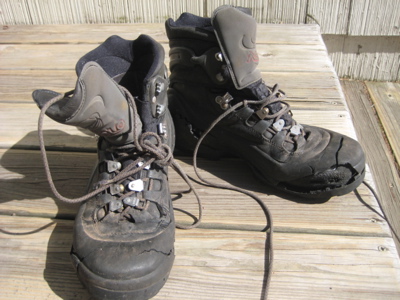 Even as my tastes shifted to trail shoes, I still wore them on occasion, as they were by far my most waterproof and warm option. The last occasion being a deep snow hike on the Ragged Mountain Trail (here). You’ll note that the toe area was a bit, shall we say, worn. I wore snowshoes and had a great time on the trail that day. I finished up, noticed two toes on my left foot were a little cold, but I went home and didn’t think about it. 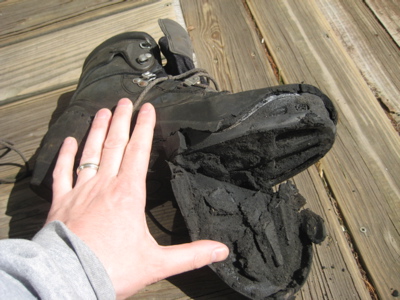 That night, however, my two toes were still cold and discolored. Over the next couple days, the tips turned a nice purple color and had no feeling. Frostbite! What stinks about frostbite is that those two toes hurt for about two months and sort of “burned” in a weird way. (Update: Now more than a year later, I still feel it in one of the two toes. Not fun.) Needless to say, it was time to ditch the boots – after maybe 2500 miles of walking in them. Farewell, friends. 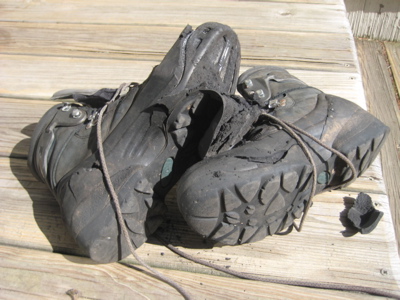