We did some drive-by (photo) shootings in Brooklyn (Connecticut) the other day, along the Underground Railroad Trail. As you’ll read below, all four of these places are very interconnected.

The first of four centrally located Underground Railroad Trail joints in Brooklyn. Brooklyn is, indeed, in the house.

I have no idea why this house is called Friendship Valley, but I do know that it was for sale during my drive-by and as you can see, was having some siding work done. 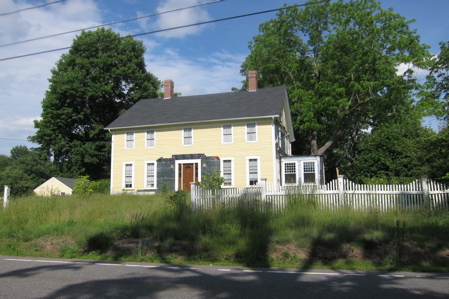 In 1825, George Benson (1752-1836), a wealthy Quaker merchant from Providence, Rhode Island moved to this 1795 home to live in retirement. A friend and supporter of Reverend Samuel May and his reform activities, Benson and his family were strongly opposed to slavery from their days in Providence. The family had a wide acquaintance with many prominent abolitionists including Arthur Tappan, the philanthropic New York merchant, and William Lloyd Garrison, the publisher of The Liberator of Boston. Garrison was married in the parlor of this home in 1834 to George Benson’s daughter, Helen Eliza Benson. Reverend Samuel May officiated at the wedding ceremony. Another daughter, Mary, voluntarily shared Prudence Crandall’s jail cell in Brooklyn on the night of her arrest. George Benson posted bond the following day. During Prudence Crandall’s two day trial in August 1833, she and some of her students stayed in Benson’s home, Friendship Valley. This home is privately owned and not open to the public.

The Brooklyn Town Hall was originally built in 1820 to serve as the Windham County Courthouse. The Prudence Crandall trial was held here on August 23, 1833. Crandall was in violation of the “Black Law” for running a school for African American students, but she pleaded “not guilty” in a stand against bigotry and discrimination. After purposely refusing to post bail to avoid being jailed before her trial, Crandall spent a night in a jail cell in the basement of the Courthouse. A daughter of abolitionist George Benson volunteered to stay with her. The next day, George Benson and Reverend Samuel May paid the bond for her release. 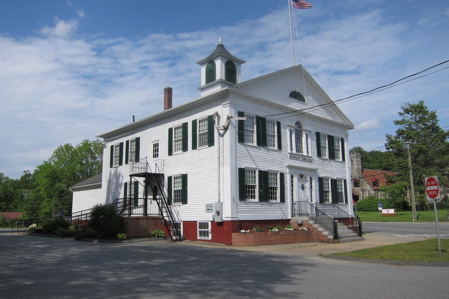 This house is freaking huge. It looks like it’s been added-on to a lot over the years, but it still retains its classic charm.

This home, built around 1825, was owned by Reverend Samuel May (1798-1875), the first Unitarian minister of the Unitarian Meeting House on the Brooklyn Green. Reverend May was a prominent abolitionist and one of the first members of the National Anti-Slavery Society. When Prudence Crandall wanted to open a school for black girls in nearby Canterbury, Samuel May came to her aid. When Crandall was arrested in 1833 and brought to Brooklyn to be incarcerated after refusing to post bond, it was May and the abolitionist Benson family who were there to assist her and, the next day, secure her release. May was also a great supporter of Crandall through her trial at the Old Windham County Court House, now the Brooklyn Town Hall. This home is privately owned and not open to the public. 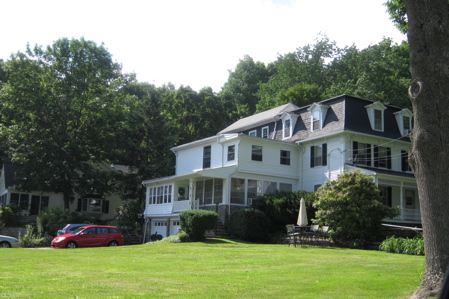 While my picture is terrible, you can still discern how pretty this church is. In fact, it’s almost pretty enough to make me want to go inside. Almost, but not quite.

This 1771 church built by Daniel Tyler was home to the first Unitarian congregation in the state. After a denominational split, Reverend Samuel May (1798-1875) became the church’s first Unitarian pastor in 1822. Reverend May was a reformer, organizing a temperance society, the Windham County Peace Society and speaking out against slavery. He supported Prudence Crandall and spoke for her at a Canterbury town meeting since at that time it was not considered appropriate for women to do so. The property is individually listed on the National Register of Historic Places and is included in the Brooklyn Green National Register Historic District. 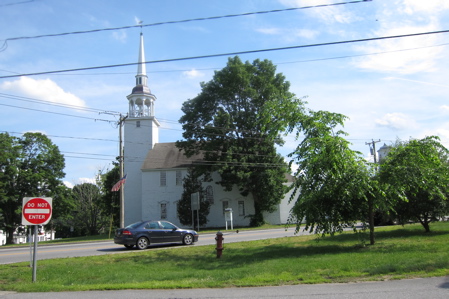