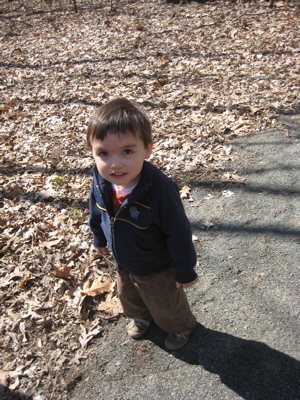 While hiking with Rob Butterworth a month prior along the Cockaponset Trail (which he maintains), he mentioned a “secret” CFPA trail. He mentioned two, actually, but the other one remains under wraps for now. Actually, I know of a few other not-yet-sanctioned “secret” CFPA trails, but that’s only because I’m tight with the Association. Don’t even ask. Or I’ll have to kill you.

This particular trail is open and welcoming to all who tread upon it. Located beside the CFPA (that’s the Connecticut Forest and Parks Association, by the way) headquarters – a wonderful place to visit in its own right – this is a super short but really cool “demonstration trail.” And guess what? Super-Maintainer Rob Butterworth is also responsible for this trail too… At least to a large degree.

With Damian in the middle of a week’s vacation from preschool, I decided to take him on his first true woodland hike. I’ve tried before, but the Metacomet proved a bit too difficult for his little legs. And a few days beforehand, we trudged through the woods a little ways to enjoy the Holy Family Retreat Labyrinth. 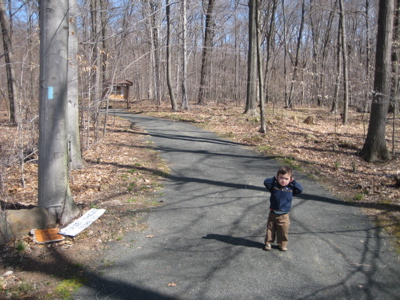 Sometimes I have no idea what he’s doing.

But now, we’d be following my beloved blue blazes! Awesome! 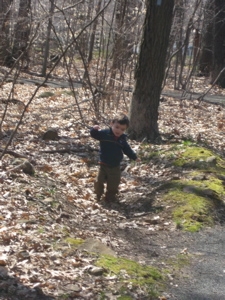 There are actually three mini trails here, if one wants to be technical. Not only is this a demonstration forest, with a bunch of tree names signified with, you got it, signs, but as a demonstration trail it also showcases the way the CFPA blazes their trails and some of the crafty handiwork they do along trails throughout the state. Additionally, the entire thing is accessible to everyone, even the wheelchair bound. And the Damians of the world as well.

Damian and I took the main trail – the blue trail – from the parking lot all the way to its end, about a quarter mile into the woods. He did pretty good, not really wandering off on his own as he likes to do sometimes. Oh sure, he only stayed on the WIDE, FLAT, GRAVEL trail half the time, rather preferring to crunch-crunch-crunch through the leaves and sticks instead. 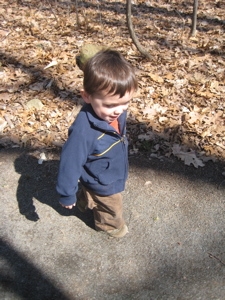 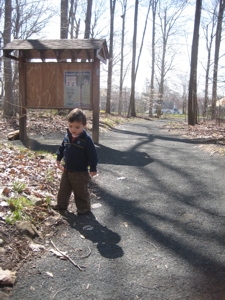 We stopped at the pond but much to Damian’s chagrin, there were no rocks to toss into it. He still managed to transplant a few handfuls of the trail gravel into the water though. The trail just sort of ends several yards beyond a raised boardwalk that juts out over a vernal pool. 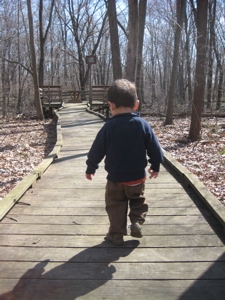 While solidly built, it is a bit off-kilter and the table (apparently) is a bit wayward. I say “apparently” because I didn’t notice, however, Rob “The Engineer” Butterworth was sure to let me know he didn’t build this structure for if he had, it would have been done to the utmost specifications. Note to self: Don’t let Rob see anything I’ve built!

There is a set of stairs that lead into the watery abyss, which may seem odd in April… but in the summer the pool is dry (hence the name “vernal”) and walkable.

We returned via the way we came and took a left onto the blue/red blazed loop that rejoins the main trail near its beginning. I should note that the blazes here are painted the way all the CFPA trails will be painted over the course of the next year or two. No more differently colored dots in the middle or crazy contortions. Not only does this “official” blazing look cleaner, it’s also much easier to maintain. Double blazes noting a bend in the trail and the double horizontal blazes are here as well, giving beginner hikers a good idea of how this whole hiking thing works. 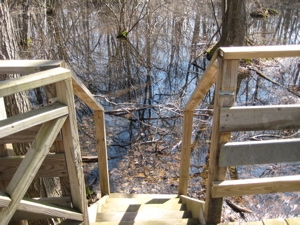 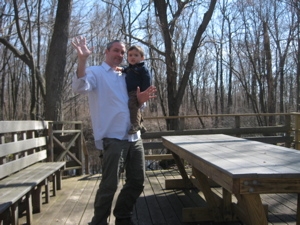 By the way, one thing the CFPA tries to do with their blazing that the Appalachian Trail does not is that when they double blaze for a turn in the trail, they place the upper blaze off to the side of that the trail is turning. A minor thing, yes, but helpful nonetheless. If you’ve ever been caught with no headlamp after the suns sets, like me, every little thing helps. Trust me. 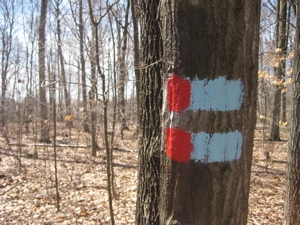 The end/beginning of the blue/red trail!

The blue/red loop is where those aforementioned signed trees are. Damian was getting tired and/or bored at this point, and took a break: 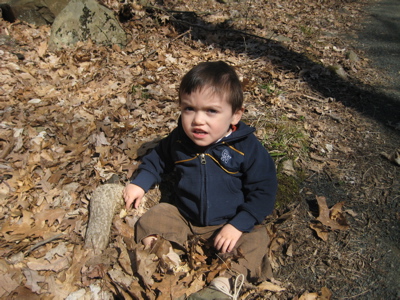 Fair enough. I was able to study a few trees I am unfamiliar with – like the Mockernut Hickory. 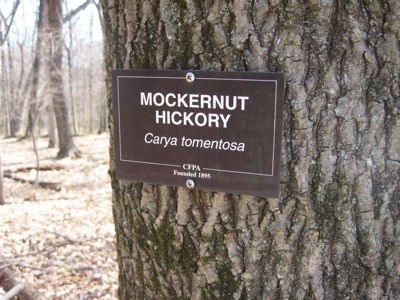 And it allowed me to sign into the logbook and thank Rob and the CFPA for all that they do. 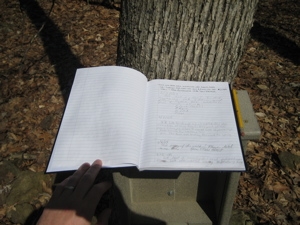 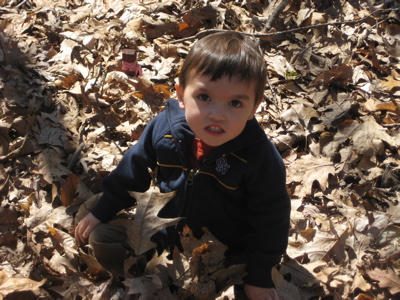 Once back to the main trail, we quickly took in the other side trail, this one blue/yellow blazed. It leads 100 yards to a little ampitheatre of sorts; a bunch of log benches and a lecturn made out of a tree stump. Countless Boy Scout camping trip memories flooded my mind as Damian hit the benches with a stick. Not to get all maudlin, but this was one of those times in the life of a parent of a special needs kid that gives pause. Will he ever be able to join the scouts? Sigh. 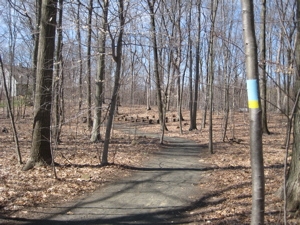 With that, we were done our hike. Damian did great! I was very proud of him.

We went into the HQ building because I wanted to see the new issue of Connecticut Woodlands, which is the greatest quarterly magazine in the world. Especially their “Try This Hike” Column. The handsome guy who writes that (starting with the Spring 2009 issue) is just amazing. Ahem. 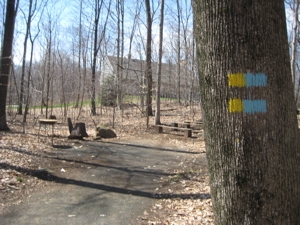 While there, we had the good fortune of meeting Eric Hammerling, the Executive Director of the CFPA. I knew of him, and he of me. It was a mutual kudos-fest. Without Eric and his organization, I wouldn’t have all these great trails to hike and write about. Don’t be shy – feel free to stop in and show your appreciation as well. Though you probably won’t score a free t-shirt like I did.

So thanks to Eric, the CFPA and all the trail volunteers! 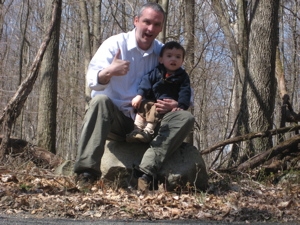