I’m just bummed I missed out on a museum with the word “implement” in the name. Because that’s cool. And by all accounts, this museum was most definitely cool. I recall an article in our local free weekly paper about it a few years ago which made me say to myself, “I should create a website all about these random little museums, but nah, that’ll never happen.” 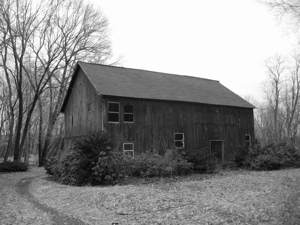 I drove out here the other day to check out the premises and was disheartened to see that nothing remains. Heck, at least this guy (with tastefully demure black and white as well) got some shots of some implements.

As you see, I got nothin’. Nothin’ except an inadvertently creepy picture of myself (below). But the paper of record wrote a nice article about the (at the time) fading museum. (For the record, I fear that these articles will disappear, so that’s why I copy and paste them.)

This article is one of the sadder ones I’ve read… sort of lets me know – for the first time – my silly little blog might be of interest down the road. 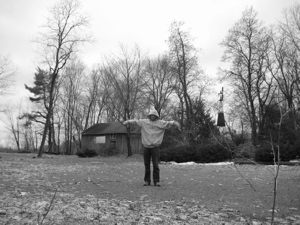 From The New York Times:

WENTWORTH T. PHILLIPS said he had always banked on simple basics like self-sufficiency and knowing the skills of the laboring class to make it in life. Based on those tenets, he founded the Bloomfield Farm Implement Museum in 1980. As he will explain over and over, he started his museum with ”the kids, the kids, the kids,” especially inner-city children, in mind.

”This is not a museum where people fold their hands and ask questions,” Mr. Phillips of Bloomfield said one recent day inside the large, red weather-worn barn that holds many of the collection’s 3,900 antique tools and farm machines. ”They crank things. They ride on them. They learn what they were made to do.”

”The kids start rattling things, sitting on them, pulling, pushing, cranking things,” the 52-year-old said. ”They go crazy; you can’t stop them. I don’t teach kids reading and writing. I’m talking about skills.” 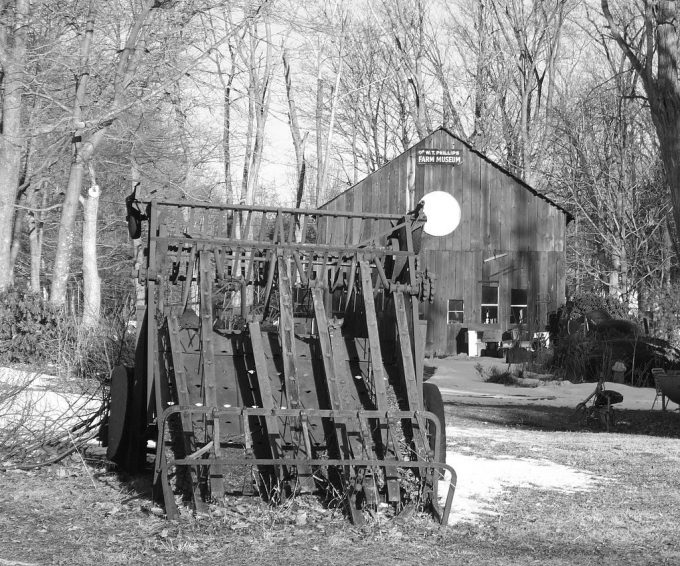 It is self-sufficiency, being able to do just about anything with his hands, that Mr. Phillips credits to his rise from a migrant farm worker to a homeowner and businessman. He has been a farmer, a blacksmith, a clocksmith, a landscape artist, an antique dealer and in his early days, a professional boxer. But his skills have not been able to help him pay off a government loan to save the museum, his nearby home and his dream to help as many children as he can.

When Mr. Phillips opened his museum, he received an $80,000 loan from the Small Business Administration to develop the museum’s six acres of land and to cover initial operating costs. He also received two grants, for $10,000 and $25,000, from the State Department of Economic Development. Otherwise he has run the museum single-handedly, taking in less than $2,000 a year.

Since 1980, he said, he has made only one loan repayment. In 1987, the Small Business Administration began foreclosure proceedings on his house, which he had used as collateral, said Hunter Lohman, deputy district director for the administration’s office in Hartford. Mr. Phillips has been allowed to remain in his house, where he operates an antique and clock repair business. However, Mr. Lohman said if Mr. Phillips did not repay the loan shortly his house and museum collection would be auctioned.

Mr. Phillips leases the land at the museum from the Culbro Land Development Company for $1 a year. But he owns the thousands of farm implements dating back 200 years – wagons, harvesters, feeders, potato cutters, butter churns, cream separators, chicken incubators, ploughs and hand tools. Mr. Phillips said he had spent decades going to estate and farm sales around New England to collect the pieces.

State Senator Reginald J. Smith, Republican of New Hartford, said he was moved by Mr. Philipps’s plight and introduced a bill earlier this year that would appropriate $100,000 to purchase the equipment and buildings. If the bill is approved, Mr. Phillips would be able to repay the Small Business Administration loan and would remain as curator. Meanwhile, Mr. Smith said he hoped a private party would buy the property.

”If no one else picks up the pieces, the farm implements will be disposed of in some way,” Mr. Smith said. ”Phillips had made a good case for the museum – its value to the community and the long and hard hours he has dedicated to it.”

Dedication, Mr. Phillips said, keeps him ploughing ahead despite the year-to-year financial struggles. He earns no income from the museum, which five years ago stopped charging admission and takes only donations. He supports himself by working odd jobs like repairing antiques and clocks or landscaping, he said.

In 1950, Mr. Phillips came to Florida from St. Kitts in the West Indies as a migrant farm worker. He moved to Hartford in 1952 and worked on the tobacco fields in Windsor. In 1954, he worked at a slaughterhouse in Bloomfield. The next year he began working odd jobs, but always hoped to open a museum of antique farm tools and machines and hand down his skills to disadvantaged children.

”I’m a poor man; I’m a black man,” he said. ”So I ask you, I don’t have any children. Why did I do it? I didn’t put up that collateral to buy a Mercedes or a yacht. I did it to save inner-city children from stealing and killing.

”I am self-learned. I am self-sufficient. I came to the United States to earn 45 cents an hour. I own my own home now. I show kids that I learned the skills and disciplines, that I can do anything.”

About 10,000 visitors come to the museum each year, mostly children and mostly during the summer. Everything about the museum resembles a farm, from the winding dirt driveway and the baying goats and donkeys, to the many old and rusty wagons and tractors scattered around the property.

”This shows the kids what it was like before it was trucks and tractors,” Mr. Phillips said. ”It was oxen pulling the carts, doing the same work that farmers do today.”

Inside the red barn museum, the dirt floor is covered with pebbles and the space is filled with such items as an 1810 vacuum cleaner (”It still works,” Mr. Phillips said with a beam), one of the earliest washer and dryers, a rototiller from Sweden that dates back about 100 years, stage coaches, a permanent plough and deep-well pump from 1790, and the newest item, a 1911 clover cutter. Lining the walls are tree and ice saws. In display cases are horse bits, horse shoes and old medicine bottles. 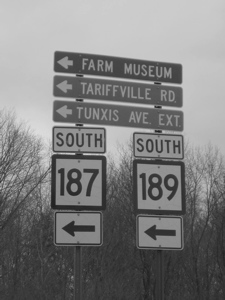 2020 Update: There are still signs for this museum.

The artifacts, Mr. Phillips explained, came to him dirty and rusty. He repaired and shined them and can spontaneously date any piece in the collection.

”The beauty of this museum is the kids,” he said, not the collection. ”They seem to come alive here.” Until a few years ago, Mr. Phillips ran a six-week summer program for inner-city children in Connecticut where they would spend the day at the museum helping to restore equipment, care for the animals, maintain the grounds and learn other skills.

”If I have to sum it all up I’d say I taught them discipline, culture and how to respect yourself,” Mr. Phillips said. ”And to learn by being with other people.”

Deborah Carson, a real estate agent from Windsor who is a volunteer at the museum, is trying to expand the children’s program to include first-time youth offenders. She also wants to help strengthen the museum’s ties with school systems and to form a museum board.

”I believe in the museum and in him,” she said. ”He believes in leaving something behind that’s worthwhile. He’s trying to preserve the working-class history, to make sure people know how butter was churned and what the first washer and dryer looked like. I call it the simple path.” 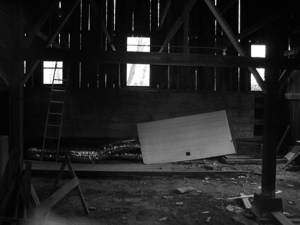