Since this site is mostly read by Connecticutters, I’ll assume most of you are familiar with Horse Ridge Cellars. After all, Connecticut is “the richest state in the country,” and Fairfield County is one of “the richest counties in America.” 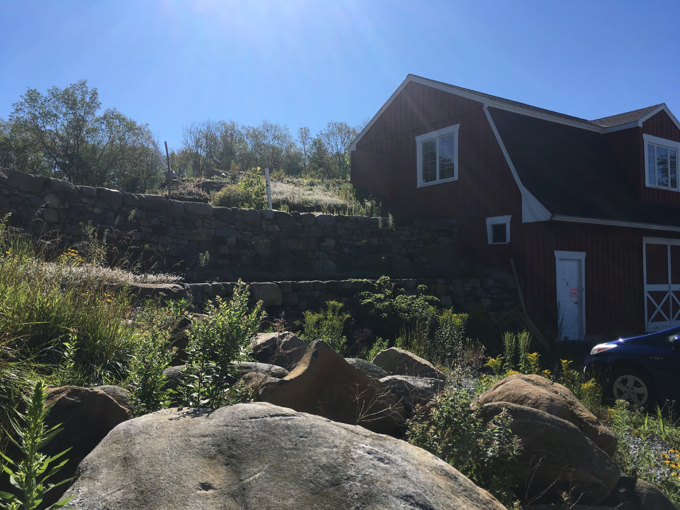 So some of you in lower Fairfield County already know about this place. Your secret is safe with me.

For the rest of you commonfolk, sit back, relax, and prepare yourselves to enter the Cold War Wine Bunker of the Rich and Famous.

I said the Cold War Wine Bunker of the Rich and Famous.

“But ‘Horse Ridge Cellars’ sounds like a new winery I didn’t know about,” you say. Well, it’s not. And that’s why I’m here for you. HRC is infinitely cooler than any winery I’m familiar with. 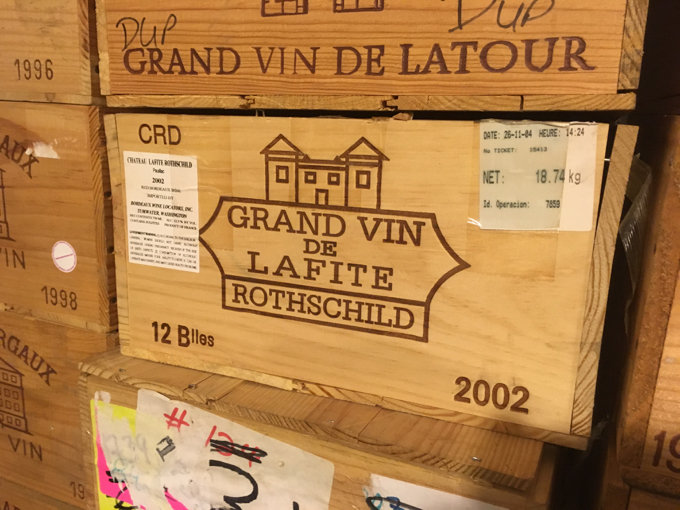 Let me back up. I became aware of HRC several years ago… I believe it was actually that Jason Hawkins guy who desperately wanted to be Mr. All Things Connecticut. It was either on CPTV or on his short stint on NBC30. Anyway, if that dude could get a private tour of a secret wine bunker hidden away “somewhere in the hills of central Connecticut,” I figured I could too.

It took seven months, but I did it!

(In truth, the proprietor Jed is super friendly and our schedules never matched up, so the 7-month interim was not HRC’s fault.) Once a date was agreed upon, I had to send the most important email of all and wait. The one that said…

“Where are you located?”

And then it came. I now know where the secret wine bunker is located! This is one of those little CTMQ victories that I celebrate far more than you’d think.

I’m not going to tell you where it is other than the fact that it’s in Stafford. That information is found easily online. I will tell you that it is not easy to find, and everything you’re about to read about “privacy” and secrecy is true.

Although, I did share a good laugh with Jed and his manager Erich that they wear branded fleeces. I asked how they advertise and the simple answer is that the don’t. “We’re purely word of mouth. Our clients know the potential clients and that’s how they get to us. Lest you think this is a risky model, it’s not. HRC is incredibly successful and boast an international client list that probably reads like a Warren Buffet ledger. 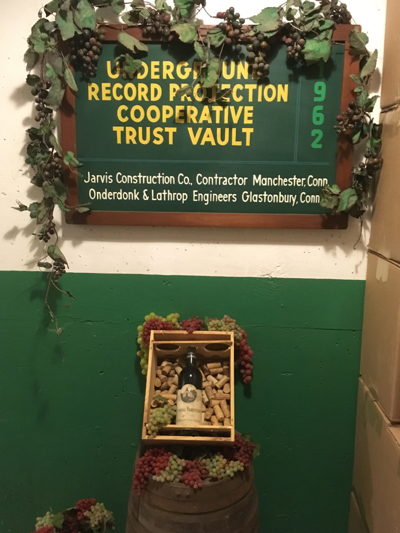 Next time I’m at a chic-chic Greenwich cocktail party, I’m just going to walk around saying, “by Jove, I say, those chaps at Horse Ridge Cellar are simply the bee’s knees!” Making friends is easy.

Enough babbling. What is this place?

In 1962 – at the height of Cold War tensions – a consortium of banks and insurance companies constructed an underground bunker in rural CT. Trustees of the ‘Underground Record Protection Cooperative Trust Vault’ planned to store crucial financial records at this location in the event of a nuclear war.

After excavating, builders poured 18,000 cubic yards of concrete with 126 tons of steel reinforcements to create the 18-inch thick walls. With an offset dual entryway and a 12-ton, 19-inch thick steel vault door – the facility could withstand an indirect hit from a nuclear warhead. After backfilling 10 feet of earth on top and around the building, insurance records would be safe from direct artillery fire. 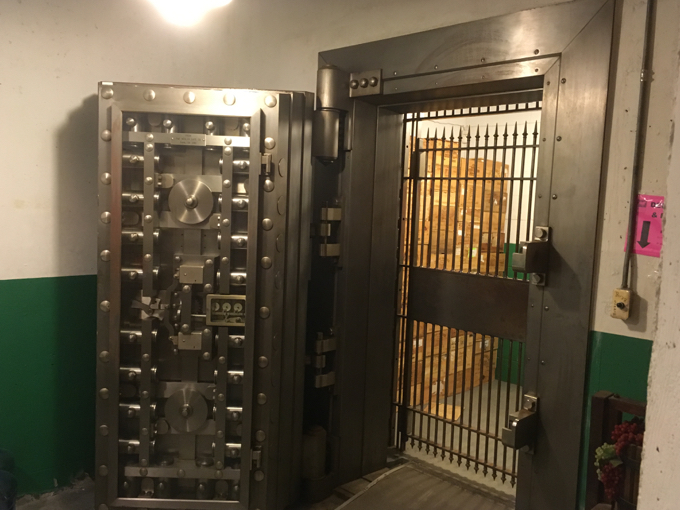 They are not messing around

Since Hartford was an important financial and insurance hub in the 20th century, this place made sense. Heck, here’s a photo for Cold War CT from 1988 showing all the insurance and financial people coming into the vault. No clue what a LIMRA is though. 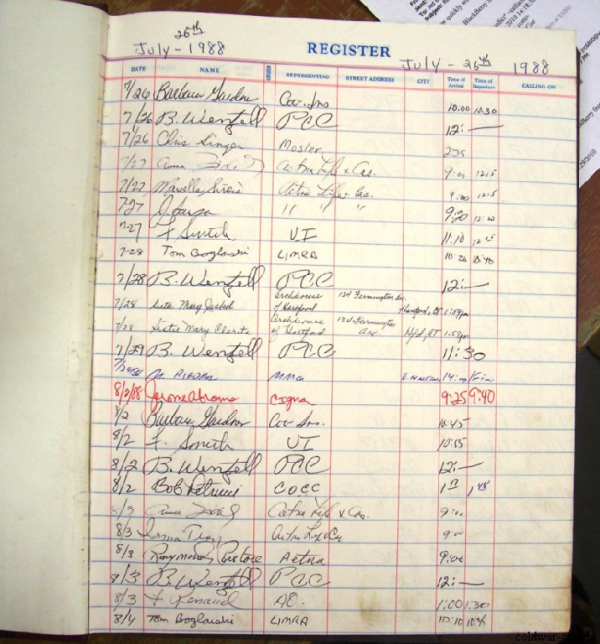 Here’s a plug for Cold War CT. That site is eminently readable and fascinating. Better pictures of HRC than I have too. They also know a bit more about how this place was built:

… started construction of an underground vault using specifications provided by the Atomic Energy Commission (AEC). Using the “scoop and fill” method a large hole was excavated in the side of the hill on the east end of the property and a 10,000 square foot concrete vault was built. It was then covered by fifteen feet of soil. The facility had 2-foot thick reinforced poured concrete walls, a 9 ton blast door and included an air filtration system that would filter out post-attack fallout. The specifications called for the vault to survive anything but a direct hit by a nuclear bomb. 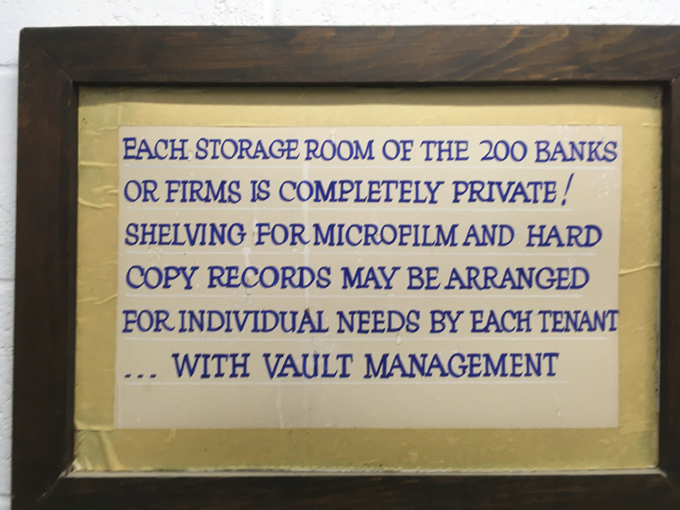 The vault’s features were many:

In addition to protecting records, the vault would protect top executives within the consortium. They added a decontamination shower to help suppress the flow of radiation into the vault. They also developed plans for designating leadership, creating an underground living space and allocating emergency rations. Some of these rations – including dried meat, chocolate bars, biscuits, vitamin pellets, and water in lead lined cans – still exist at the vault.

Haha, so it’s true. The rich executives had a place to scurry off to in the middle-of-nowhere to live safely through WWIII. Jerks. There were even special radio and phone lines that went directly to local police and contingency plans to get the executives up to the bunker when the Russkies started fired missiles at us. 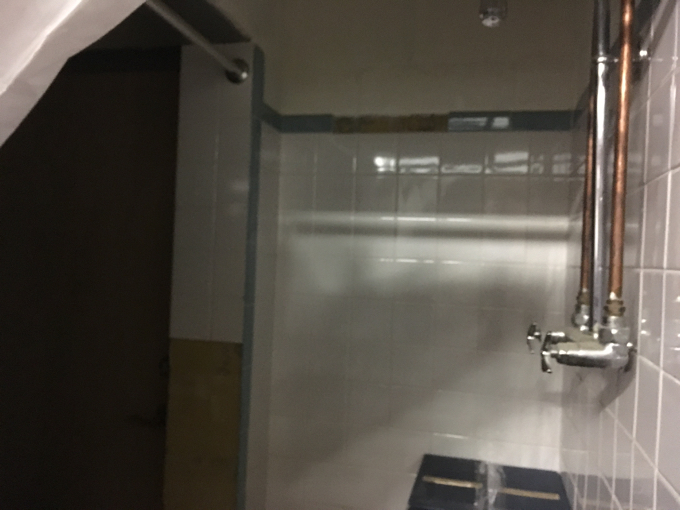 Into the 90’s, the vault fell into disuse as companies moved to electronic backups and such. The property went up for sale while young Jed was at UConn. He became aware of the property and at the same time had the genius idea to repurpose the place. And voila!

Jed and his wife bought the place and transformed it into the only wine storage cold war bunker vault thing that I can find. 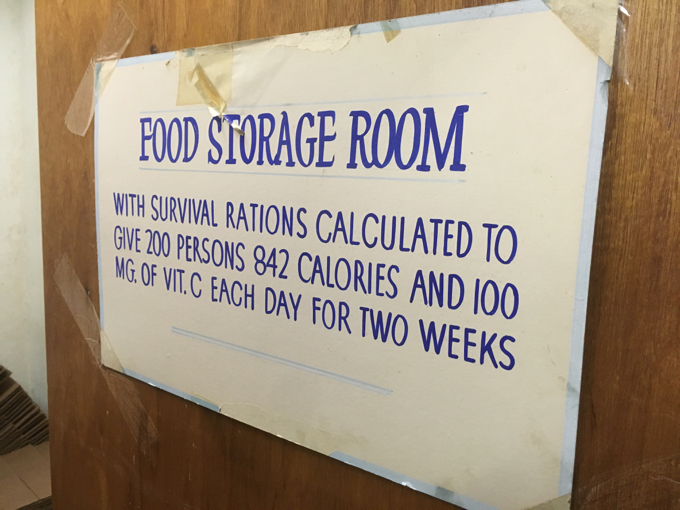 But then again, maybe there are a whole bunch that I can’t find because they are secret like HRC is secret? Hmmmmm…

I arrived and was greeted by Erich who, I think, runs the day-to-day stuff here. He was to give me my little tour.

The main bunker was 10,000 square feet, but HRC has doubled that size by adding another bunker under the hill. As I walked into the actual storage area, I couldn’t believe how much wine was there… 20,000 square feet of wine is a lot of wine. 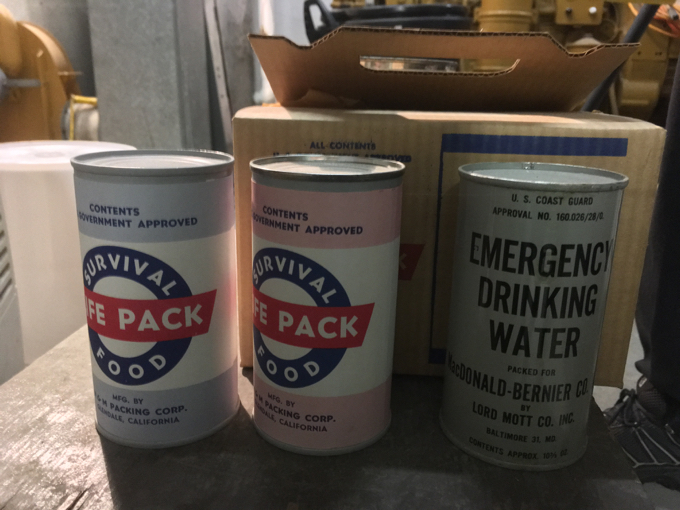 HRC goes to extreme lengths to protect their clients’ wine. Beyond being sure I wasn’t taking pictures of any client names, no one has anything to worry about. HRC has installed brand new geo-thermal heating and cooling systems and state of the art intrusion, water detection and fire suppression systems.

It is always 55 degrees and 70% humidity. No matter what. Another Superstorm Sandy? Pshaw, your wine is fine. Generators, fuel sources, and most importantly, the bunker is underground. HRC is protected by and insulated with 8-10 feet of earth. So even after a catastrophic event, HRC can still maintain an ideal temperature of 55º and 70% humidity without any systems running. 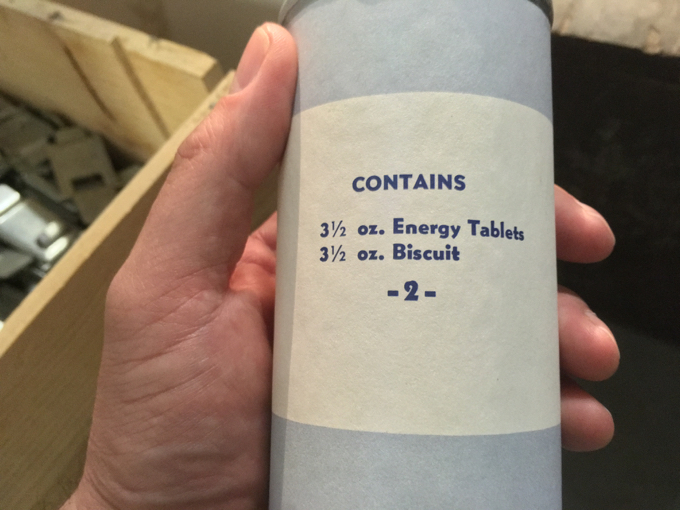 Which is why the state-of-the-art heating and cooling systems are almost redundant. And the generators. Here, Outside weather pretty much never affects the inside temperature.

I learned all about “urban vibration” and how if you store you fancy wine in one of those Manhattan outfits, they will shake from trains, planes, and automobiles. Not here in Stafford! Unless the cows that surround the bunker suffer from Bovine spongiform encephalopathy and all decided to go crazy on top of the bunker, your wine won’t shake here.

(Actually, with 15-foot concrete and 10 feet of earth, no cow is going to vibrate your wine.) 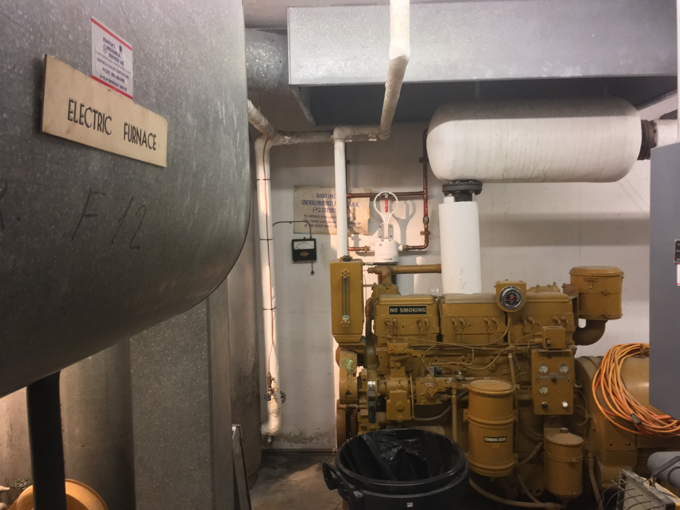 As they say, “HRC is the most peaceful place to store your wine.” That’s nice. And having spent time in the bunker, I can confirm. It’s peaceful. And still. And secure.

I asked and yes, they do have clients that store beer here. And whiskeys and such. But it’s mostly just wine. Lots and lots and lots of wine. Some people are collectors that have run out of room. Some are investors that treat their wine like stocks or bonds. Some are wholesalers that need a place to hold onto some bottles for a period of time. 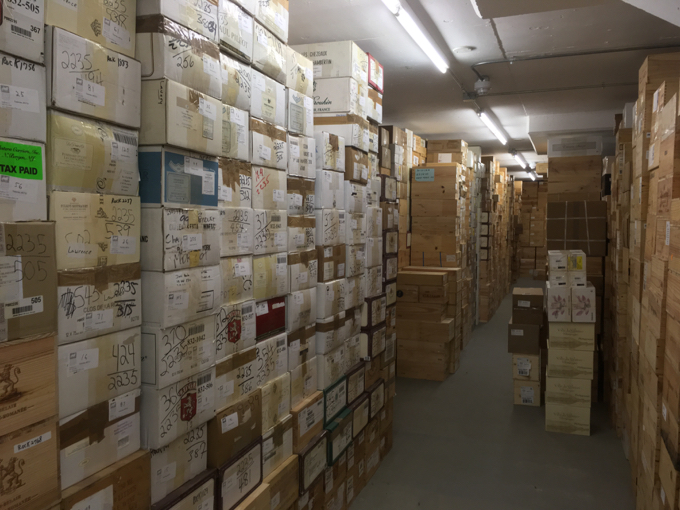 And then there’s the guy whose house partially burned down and the next day he called HRC to come and recover his wine collection. Never mind anything else, just save the wine. Priorities.

Jed arrived and joined us and we had a nice chat. About beer. And local breweries. I can’t even pretend that I can talk about Château Lafite or whatever. I know my 13-dollar bottles of New Zealand Sauvignon Blancs and I’m good. 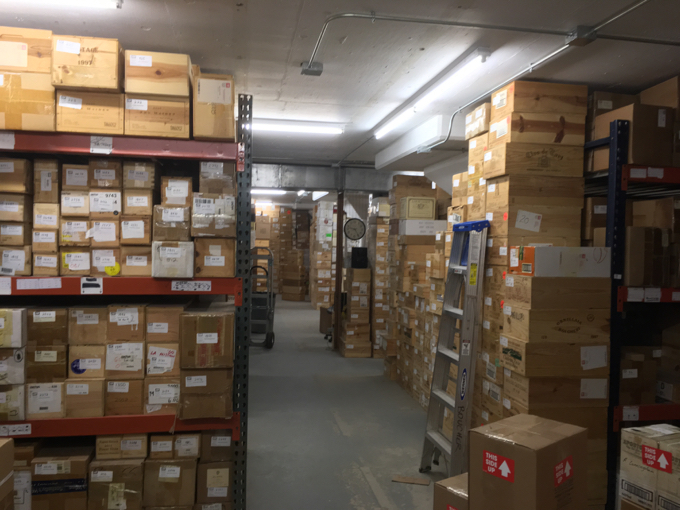 I love HRC. An air of secrecy, an interesting history, cool employees, unique ideas… I’d like to thank Erich and Jed for showing me around.

And I swear, your location is secret. As I said, since Russia and/or China will be bombing us soon, I’m not telling anyone where you are. I’m just going to show up with my wife and kids when it does happen. Thanks guys!” 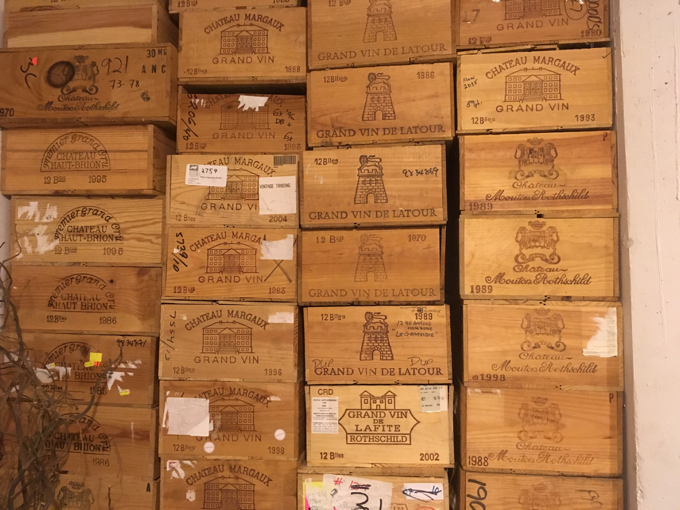