This page was inhabited for 2 years by a post whining about how I haven’t actually been to Hospital Rock and how maybe someday I’d go in search of it. Well, my search was made a heck of a lot easier by a CTMQ reader who supplied me with detailed directions to the rock. A big thank you to her, as my search would have been about a mile off to the north and west – for no other reason than my gut was wrong. 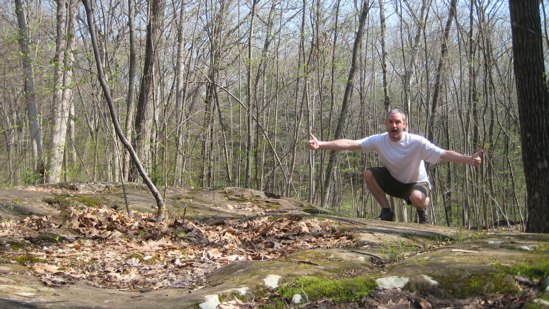 And so, after nearly two years of wondering where Hospital Rock was – and coming across a few mentions of it here and there, I hiked in to it. This page gets a lot of web traffic and I get a relatively large amount of email asking me about it. What is the draw? Why are other people besides me seemingly fascinated by this rock? Why can’t anyone find it?

That last question is the easiest to answer – because “they” don’t want you to find it. “They” being the Farmington Historical Society and other preservationist entities interested in protecting the rock; not an easy task when you think about it. Everyone knows the vicinity of the rock – the swath of woods surrounded by Farmington, Plainville and New Britain is accessible to tens of thousands of people. It’s bounded by I-84 and routes 4, 10, and 372 and these woods are scarred by many ATV and Jeep trails. A cool section of the Metacomet Trail passes nearby that includes such popular areas as the old Nike Missile Base, Pinnacle Rock, Will Warren’s Den, and Rattlesnake Mountain. Heck, 50 Cent’s mansion is relatively close, albeit on the other side of Route 6. (All that cool stuff is here, on our Metacomet Trail Section 8 hike.)

So I understand the wishes to keep this rock’s location secret. It would only take one idiot to destroy it and its attendant history. Some preservationists actually state publicly that the rock is no longer even there. Well… It is. But I must say off the bat – the rock itself is a bit anticlimactic. 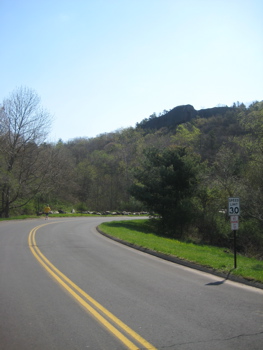 So where’s the rock? Ha! It’s actually quite easy to find once you know where to look and while it’s further off the Metacomet Trail than I had thought, but it’s still very close to some other, mostly unmarked trails. I used to offer up a set of directions but I’m no longer doing so. It’s not that I don’t want to help people out, it’s that half the requests were goofy lies and furthermore, I’m no longer confident my now rather old directions are still accurate.

I parked at the ultra-secret location (It can be accessed from Plainville or Farmington) with about 60 No Parking signs located at the trailhead. I took care to drive further to a safe spot, but did notice two other cars in danger of being towed. Now, before anyone thinks this No Parking zone is to keep people away from Hospital Rock, it’s not.

I figure A) This would be a good access point for teenagers to park and go “experiment” and the signs discourage that, B) the well-heeled crowd who lives there doesn’t want their road to be a parking lot, C) it discourages ATV usage, and D) there is a challenging rock climbing spot 5 minutes into the woods and the town doesn’t want blood on their hands.

All much more viable reasons than protecting a rock that relative few people know about. 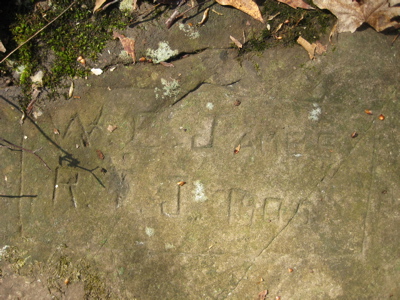 I walked in the woods, up the hill, crossed paths with the Metacomet, down the hill, turned this way and then that and after only maybe 15 minutes, I was there! Hospital Rock! Right beneath my feet! This would be a good time to explain what the heck I was standing on.

Excerpted from the definitive article on the rock, from Hog River Journal:

Hidden deep in the second-growth hardwood forest of Rattlesnake Mountain is an inconspicuous flat ledge of traprock. On it are carved 66 names of long-ago Farmington residents. This is Farmington ‘s “Hospital Rock,” and it marks the site of Eli Todd and Theodore Wadsworth’s smallpox inoculation hospital of the 1790s. It is a reminder of the terrible epidemics of another day, and of the efforts of local physicians to halt their spread.

In colonial New England villages like Farmington, smallpox epidemics were infrequent, but the inhabitants were more susceptible than city dwellers when outbreaks did occur. A rural population would become immune as the result of infection, and another outbreak would not occur until five to 20 years later, when a critical mass of susceptible people was again present. The larger towns and cities, on the other hand, experienced small outbreaks of the disease with such frequency that it was almost endemic. Their populations carried a high level of immunity and were protected for life after a childhood infection. The grim folk wisdom was that one’s child was not one’s own until it had survived smallpox. Most children did in fact survive, and their mortality was lower than that of adults, for whom the death rate was 20 to 30 percent. 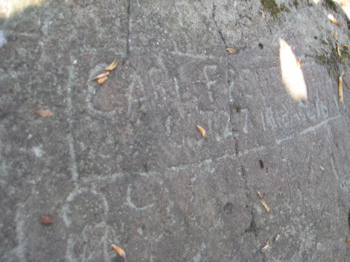 Eli Todd (1769-1833) was the well-to-do son of a New Haven merchant. He was a brilliant honors graduate of Yale who had studied medicine with Dr. Ebenezer Beardsley of New Haven under the old apprentice system. He had begun practice in Farmington at the very young age of 21, and had gained the respect and love of his many patients. His were gentle treatment methods in an age of harsh remedies. His skill, kindness, and cultivation made him the favorite practitioner of the emerging wealthy class in the community. In 1792, when he joined with Theodore Wadsworth to establish the “hospital” on Rattlesnake Mountain , Todd was a hard-working 23-year-old bachelor.

The hospital building stood on a stony hillside known as the “goat pasture” on Settlement Road , the old road to New Britain . The land on which the hospital was situated is believed to have belonged to the Josiah Kilbourn family, and was purchased in 1798 by Elias Brown. Both families evidently had farm buildings near the site. However it is unknown at present whether the hospital had been a farmhouse or outbuilding, or was a specially built structure. It was far from both town centers, but easily accessible for attendants and visitors with immunity. Rattlesnake Mountain sheltered the building from north winds that would otherwise chill the patients during the autumn months. Our only description of the structure comes at second hand from a patient’s grandchild, who described a long narrow building standing somewhat off the road near a spring. Inoculations were done only from about May until October, and there was no need for fireplaces.

Near the hospital building was a smooth sunny ledge on which the young patients could socialize, and where they picked up messages and packages from home. Of the hundreds who must have stayed at the hospital in the years 1792, 1793 and 1794, sixty-six have left us their names or initials cut into the ledge. It is smooth, flat and slopes down away from the old roadway. Scattered on the rock’s surface in an irregular area about 15 by 20 feet, the names are barely discernible until a visitor dusts them with flour. Then they emerge, like a photographic print materializing in a darkroom pan. 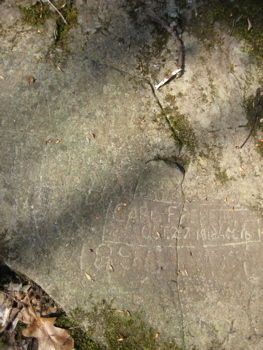 It is estimated that hundreds of patients were inoculated and spent their recovery at the Todd-Wadsworth Smallpox Hospital . Fifty-two of the 66 names carved into the rock include first, and sometimes middle, initials, and these patients can be further identified with some confidence. Considerable information is available for 26 of them. The known ages of the patients ranged from 9 to 33 years. Twelve family groups appear, and one or two parent-child pairs. The social position of the inoculees is revealing. Nineteen were descended from original proprietors of Farmington , and most appeared to come from homes of at least middling wealth. There were the children of physicians, future physicians, and future spouses of physicians.

The old Settlement Road is now abandoned, though it can be traced from the quarry on Route 6 several miles through the forest to where it is interrupted by Interstate 84. Along it innumerable fragments of traprock litter the forest floor, and there area a few hints of stone walls. Near the road and 1,000 feet from the rock itself, there is a cellar hole lined with mortarless rock and a long-abandoned well. These are the only remains so far uncovered that accompany Hospital Rock with its carved names recalling a long ago and very different time.

Hospital Rock has for two centuries rested on the periphery of Farmington history. Since even local historians have been uncertain of its location, it has acquired an aura of mystery and romance. Yet it has remained a very meaningful artifact, speaking to us in a direct and moving way from the past. In the last few years, however, there has been renewed and effective interest in its preservation. While the site is actually in Farmington , the land is owned by Hartford , which purchased it for its watershed. In 2002 the Connecticut Historical Commission declared Hospital Rock and the surrounding forest to be an Historic Archeological Site, and Farmington is collaborating with Hartford in a move to gain easement protection for the site. An archeological search for the remains of the hospital itself is projected for the near future. There remains, however, the intriguing question of how to preserve the inscribed slab of bedrock out in the woods. 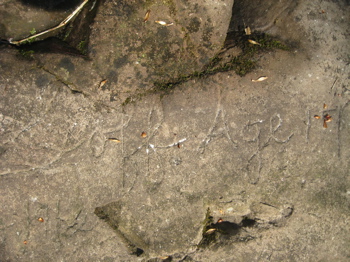 Please read the full article at the link below. There is another similar spot down in Durham called the Pest House that I’ve yet to locate… So if you know exactly where that is, I’ll tell you exactly where this is. I also know of a Smallpox cemetery in Madison and a couple other spots like that, but Hospital Rock is definitely unique.