The Roadfood hot dog slog continues… So. Many. Hot dogs. Going to 700 museums and hiking 100’s and 100’s of miles of trails in Connecticut seems easy in comparison. But I signed up for this and I will see it through. Unmentionable pig parts be damned. 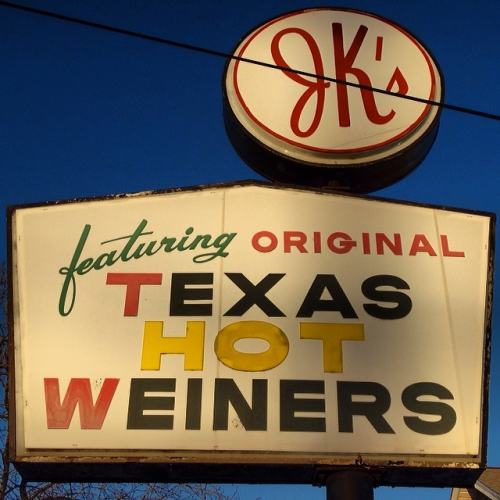 We stopped at JK’s in Danbury after an interminable drive up from a wedding in Delaware. Traffic in New Jersey and a fatal accident on the Tappan Zee Bridge – resulting in a 2 hour crossing – left us all a bit punchy (and hungry). But a plan was a plan so instead of my usual driving route up the Merritt, I went a bit further north up 684 to 84 east and thusly, Danbury. We arrived at JK’s, which has a Ground Round/Arby’s vibe to it, with those rounded greenhouse-looking glass bubble panes on one side, and dealt with an angry Damian for a bit. 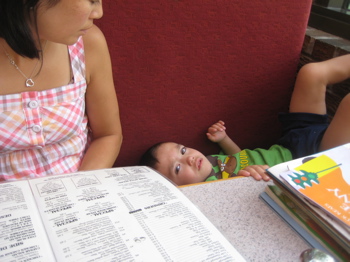 Work it out, kid.

He had been sleeping and was hot and very most likely hungry as well. These moments are never fun with him, but the restaurant was nearly empty at 2:30 in the afternoon so we just plopped him down in the booth and let him work it out. There’s really no other option with him. I should note how much I love the picture I took of him during his tantrum. Upside-down, spinning around, angry mien – with Hoang just looking down at him with some concern, some amusement and lots of patience. So it goes.

My lunch was pre-ordained: I was to have these so-called Texas red hots with the special hot sauce. I’m not sure I’d have been very enthusiastic about that choice if I wasn’t starving, but since I was, that wasn’t at issue. We got Damian some chicken fingers and Hoang had some tuna salad sandwich I think. Not that that matters. 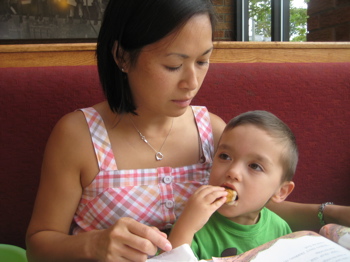 JK’s was founded in 1924 by George and Peter Koukos. At that time, they were known as “Original Texas Hot Wieners”, located on White Street in Danbury. Back in the early 1930’s, 25 cents bought you two wieners and a coffee. Many stories were shared at that counter.

The history of this place goes on a bit, and it’s really not all that interesting, but I wanted to be sure to include the following sentence: “In 1951, before the Great Flood of 1955, JK’s moved their establishment to West Street in Danbury. George, Aphrodite (the infamous maker of our special recipe wiener sauce), and John operated the business at this time. To be clear, Aphrodite made the special wiener sauce.” 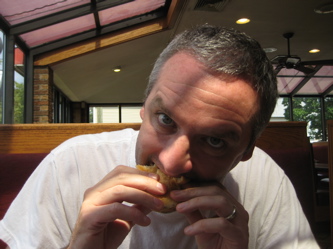 JK’s moved to South Street in 1974. Four generations and over eighty years later, the same family operates JK’s. As it states on their menu: “We’ve seen many families and their children and grandchildren come and go through the years. We like to think of our establishment as a place to meet and call home, a place to go where everyone is considered “Family”.

That’s nice. But what about the wieners?

JK’s looks like any modern fast-food restaurant, but photographs on the wall tell another story: decades of weenie history. The nostalgic black-and white pictures show JK’s with its hot-dog sign hanging over Main Street many years ago; interior pictures show a spic-and-span diner that has served the Hat City’s working-class clientele since the 1930s.

The place may have changed, but old-timers tell us that the Texas hot wieners on which JK’s built its reputation remain precisely the same charming little frankfurters they’ve always been. They are plump little sausages, split lengthwise and cooked until slightly crusty on the surface, loaded into a big spongy roll, then topped with mustard, onions, and hot sauce with a chili-pepper kick. No single element of this arrangement has flavor to write home about, but the combination is powerfully addictive. You might order two, with a thick chocolate milk shake on the side, but midway through the second dog, you will likely be flagging down the waitress for a third, and possibly a fourth. The speedy gals who tend the short counter and the booths throughout the dining room are masters of balance, toting up to six or eight hot dog plates to different tables in a single trip from the semi-open kitchen in back.

There are all sorts of other things on JK’s menu, from silver dollar pancakes at breakfast to New England’s favorite Grape-Nuts pudding for dessert, but it’s the devilish Texas dogs that put this restaurant on our map. Some connoisseurs order them with cheese, chili, and/or bacon in addition to the usual condiments; it’s also possible to get a heap of excellent house-made slaw on top or to get the bun toasted: all interesting strategies, but we suggest first-timers stick with the original configuration … at least for the first round.

Once the food arrived, Damian perked up and happily ate his chicken fingers. They were okay and Hoang’s sandwich was passable at best. My dogs were slathered in the special hot sauce and while I’m not sure they are technically hot dogs – as Stern calls them “charming little frankfurters” and the restaurant calls them Texas red hots. But yeah, they were just hot dogs to me. I wolfed down the first one without even thinking about it or really tasting it that much. As I said, I was darn hungry. 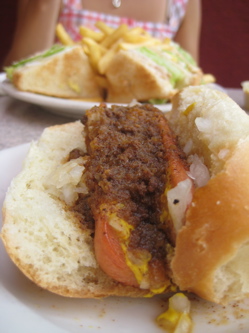 By the second dog, I took my time a bit and Hoang asked if they were “red hot” as advertised. In a word, no. There was a little kick to the sauce, but certainly not enough to order a milk or even reach for extra water. It was a good change from my usual, but really no spicier than the spicy brown mustard I love so much. Since it comes with yellow mustard and onions, the net effect is like having spicy brown on it. Go figure.

The bottom line, for me, is that of all the hot dogs I’ve eaten thus far on my journey through Connecticut’s best, as per Connecticut’s foremost hot dog guru Michael Stern, JK’s Texas red hots fall in the bottom quartile. Maybe because they didn’t have that time-honored hot dog taste exactly, I don’ t know. But I’m sure there are better things to eat in Danbury.

And if not Danbury, then a in the next town over (Bethel), where we had the impossibly rich ice cream at Dr. Mike’s for desert. (CTMQ visit here.) 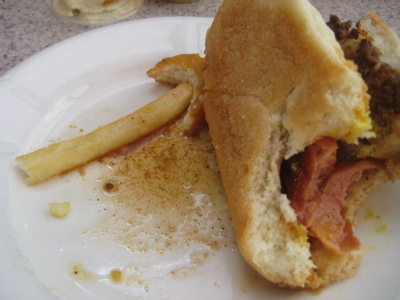