Please don’t be alarmed. Yes, I’m combining two trails, miles apart from each other, onto one page. I don’t even know why I’m doing this, as it’s not often that I do. Both properties are owned by the town of Ellington, both (more or less) have one trail within them, and both aren’t trails that you’re going to rush off to hike tomorrow. So here we are… two trails on one page.

Can you handle it? Let’s see…

The Kimball Trail in the Kimball Forest is on the south side of Hopkins Road in Ellington. Those of you who are familiar with hiking in this area probably know Hopkins Road already. The Shenipsit Trail uses it for a bit at its eastern end. 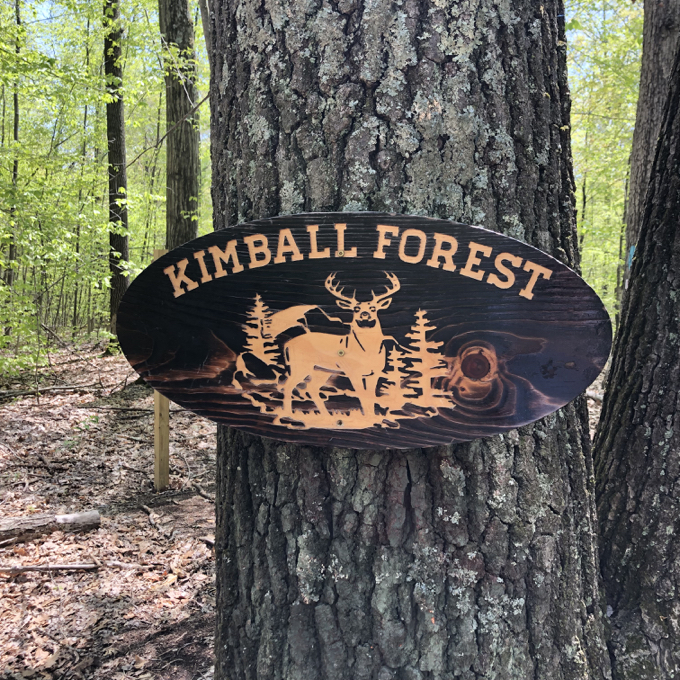 Hopkins Road is indeed a dirt road for its eastern half, but remember that we’re in Ellington. Dirt roads are prevalent here. In fact, I think I wrote a decade ago that I’d never seen so many nice, large houses on dirt roads as I saw hiking the Shenipsit in Ellington. It’s probably still true.

There is a very nice (and new, in late 2018) giant kiosk and wooden signs out here in the hinterlands. Someone – I see here it was the Zurawek Family – put a lot of effort into this thing. I looked at the lovely map on the board and set off into the rapidly greening spring woods. 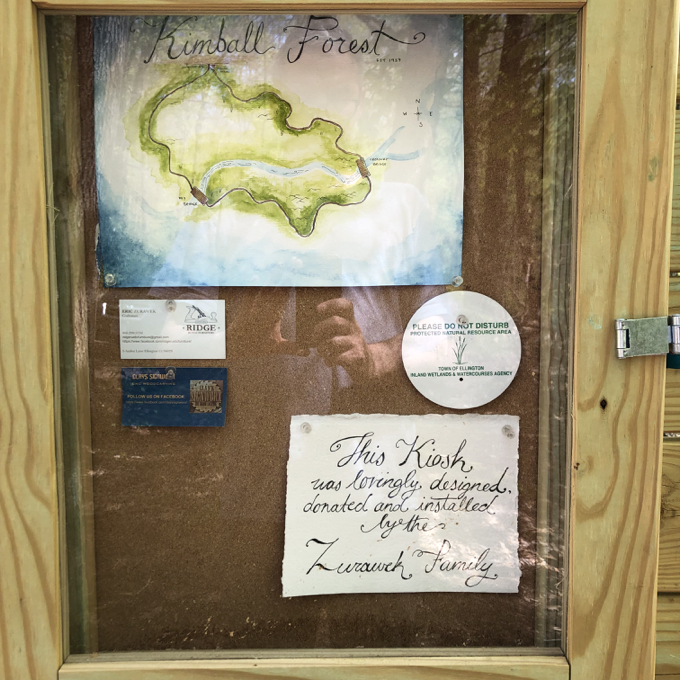 The Kimball Trail is a single loop, squeezed between Hopkins Road and the much busier Crystal Lake Road (route 140). It goes down a hill, across Kimball Brook via the Key Bridge, along the stream, across it again via the Treasure Bridge, along it some more, then winds it way back to where you parked your car.

It’s… absurd. But it’s absurdity is why it’s somewhat interesting. The town had some woodsy property and some well-meaning someone decided to make a trail in it. This well-meaning someone is very clearly not a super-experienced trail designer or builder. The Kimball Trail has so many wholly unnecessary twists and turns it boggles the mind. 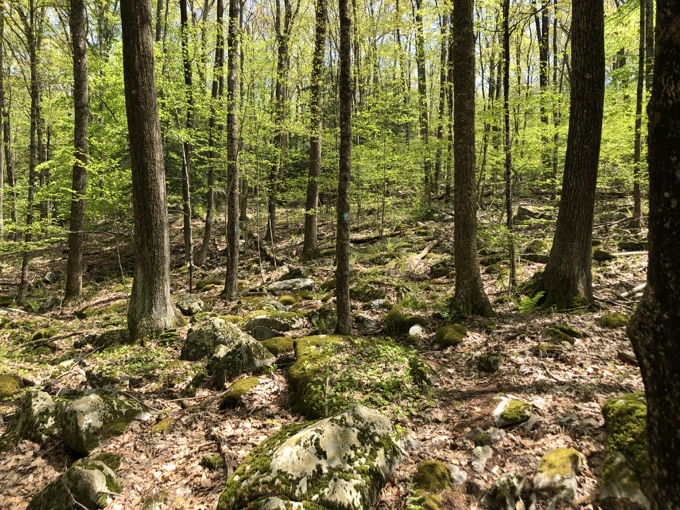 It is over-blazed to the point of ridiculousness. This entire trail is supposedly two-thirds of a mile (probably less) that could have been maybe a third of a mile if it was just a quick loop. It’s like when you were younger and you had to write an essay and you used a large font with big margins to make it look like you did more than you did because no way do teachers notice that.

My point is that the trail designer here “padded” the mileage with all sorts of added turns and curls. But that wasn’t the real issue to me. 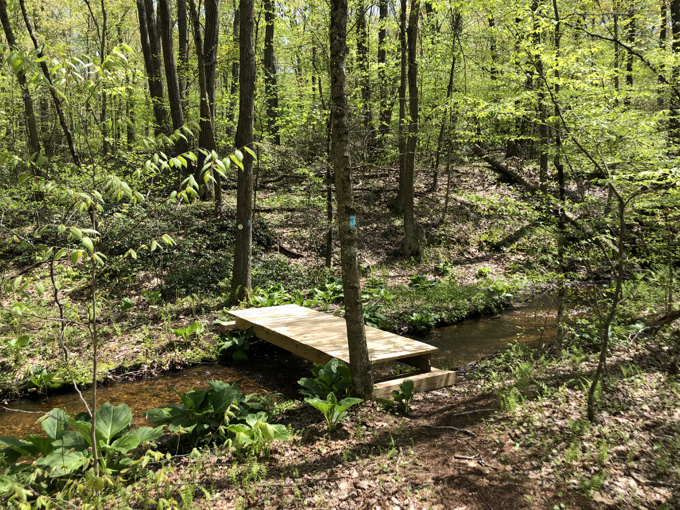 There is a lot of poorly constructed side-hilling as well as random tromps through seasonal swamps for no real reason. The two bridges are quite nice though. If this trail was even moderately trafficked, it would degrade to a mess quite quickly.

Alas, it is probably only rarely walked. Sometimes I like silly trails. I’m not sure driving out to a dirt road in Ellington is worth the silliness, but maybe it is for you. I hope so. 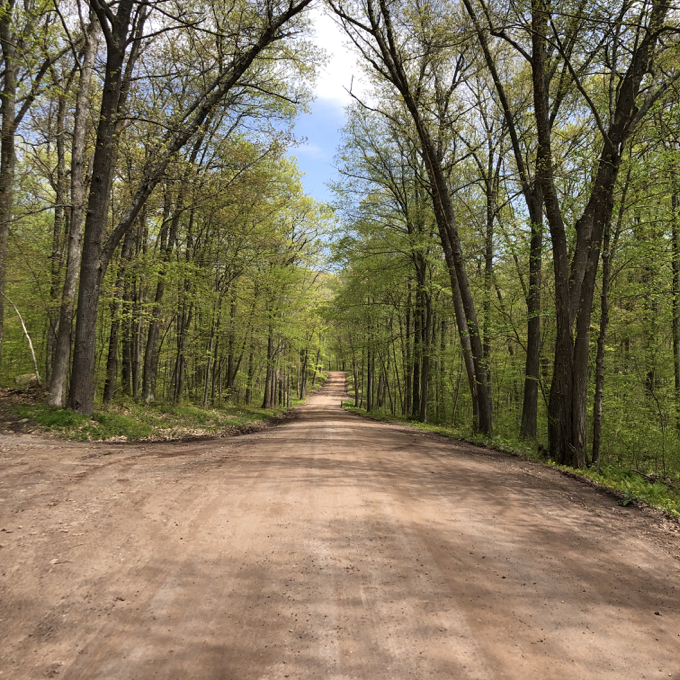 As you surely remember, I tried hiking the Batz Property previously – 20 minutes after I severely sprained my ankle while hiking the loop over at Swann Farm. It didn’t go so well and I had to turn around and go home for some icing and elevating. In the few weeks between visits, this place really greened up: 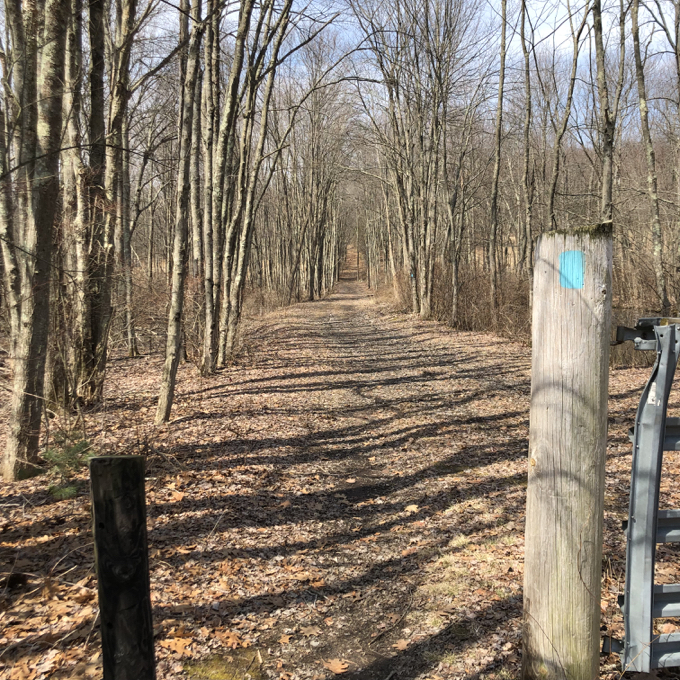 Yes, I know that’s “just how Spring works.” Jerk. The town of Ellington owns this parcel but doesn’t have too much to say about it. There is a community garden near the parking area, and it seems to be heavily used by residents.

Which is a bit weird since Ellington is basically one giant farm. Less used is the hiking trail. It’s another loop – Ellington’s big on loop trails – which takes hikers up a hill, near some fields, through some woods, and back down the hill to another field. 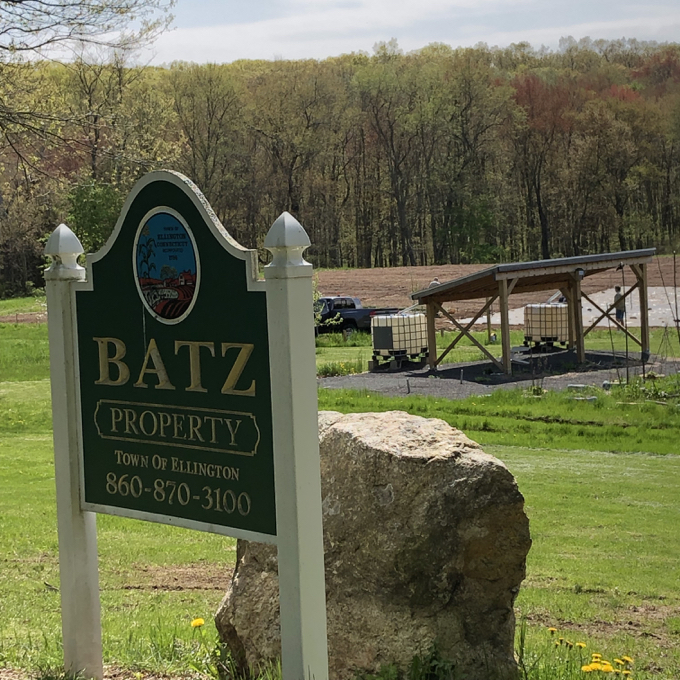 I walked the property counterclockwise, which I’d suggest. If only because crossing the last field is easier when you know where you want to end up on the other side. Near the parking area, there are several trees with bat boxes attached. Normally this wouldn’t rate mention here, but the mere fact that we’re talking about the Batz Property makes it so much cooler. 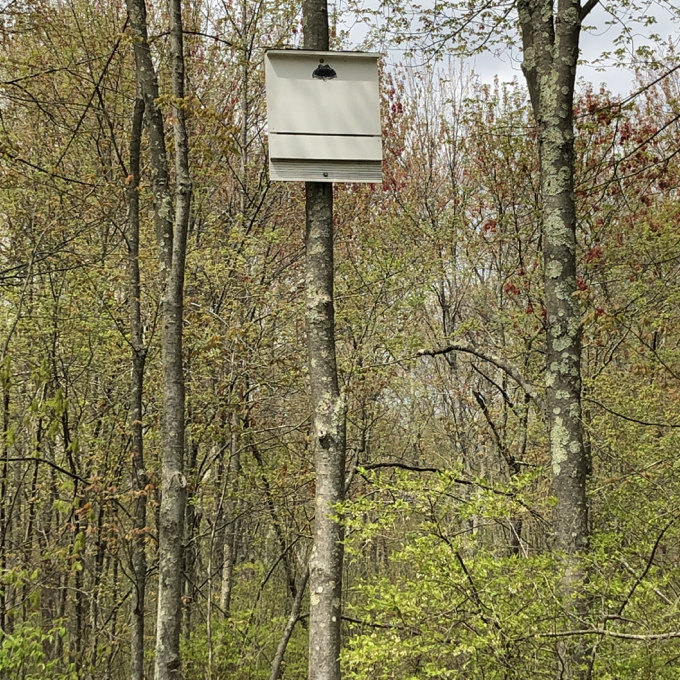 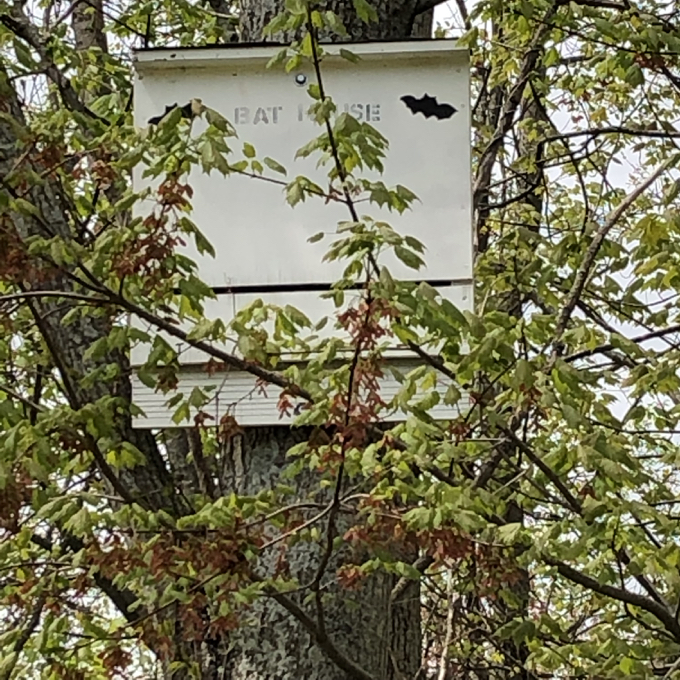 There’s a small pond with a silly little loop trail around it. Like I said, Ellington loves its loop trails. I went straight up the hill on the wide tote road before the trail veered right towards another field.

I believe the original trail here used to continue across the top of that field, but some enterprising scouts decided they wanted to take the trail into the woods. I’m sure that was a cool idea when they did it two years ago, but the upkeep and trail maintenance hasn’t been so great. At least it takes hikers away from the tick fields. 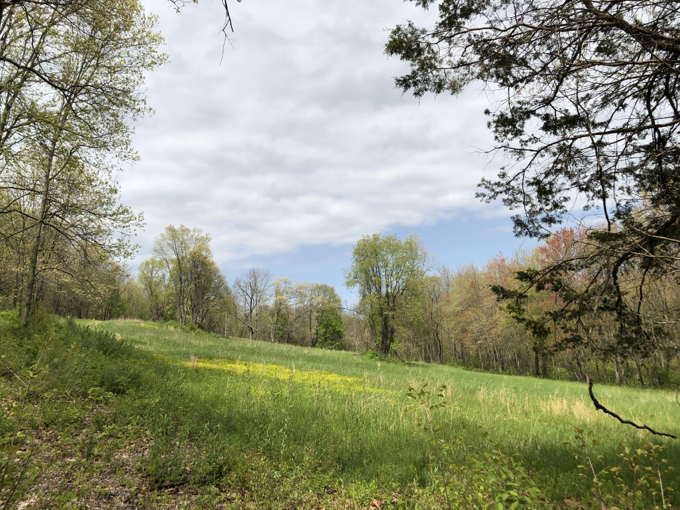 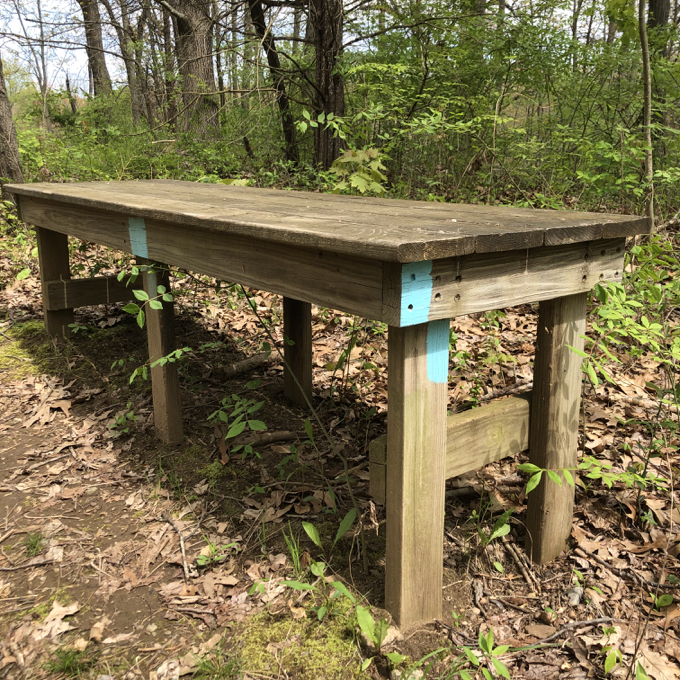 The trail here through the woods is a bit silly… especially since I could literally see the simpler path ten feet away in the field. My hypothesis as to why I was in the woods is merely that – an educated guess and nothing more.

After a bit, the trail veers sharply left to continue up the hill. It follows a stone wall for a bit and is a slightly better walk than it was along the field. 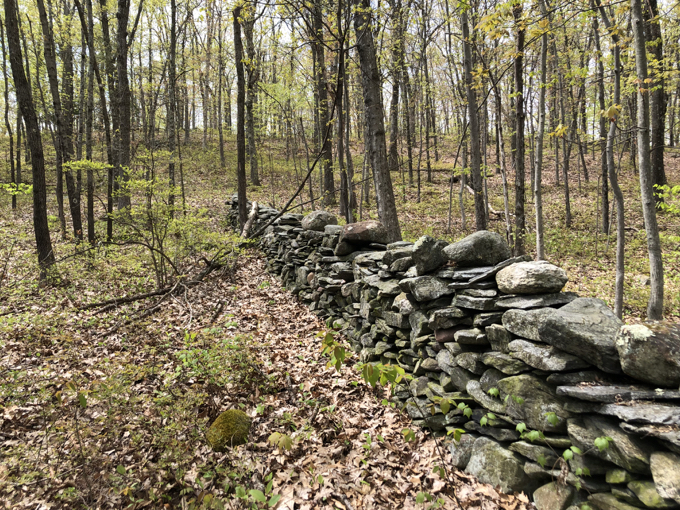 Veer left again down the tote road some more and then some meanderings off onto a smaller trail here and there. A bit bored, I bushwhacked to the top of the hill, hoping for a view. Don’t do this, as there is no view.

Back to the trail, down and around and through some wet areas and near a stream and there’s a weird little bridge, let’s go over there… 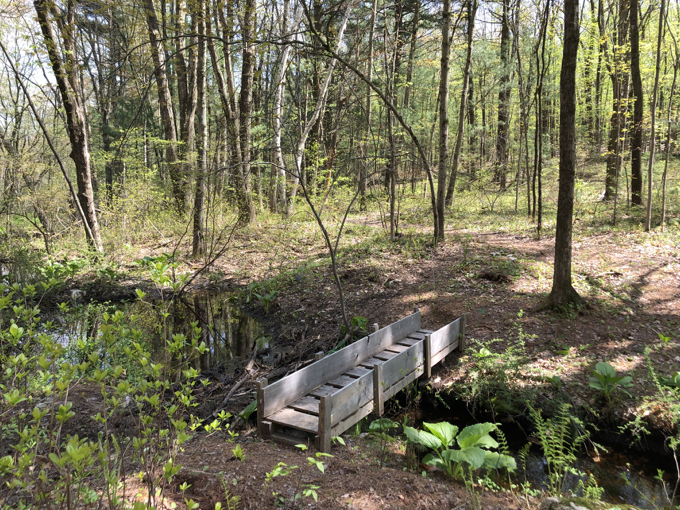 … don’t do this either. It just goes to someone’s house. Back across the weird bridge and before I knew it, I was at the top of the field near the loop split at the beginning. There’s an outhouse here and a large firepit.

I believe scouts use both, although camping up here would be pretty lame, due to the slope. Calvin was fascinated by both during my first visit, right before I went home to nurse my injury. 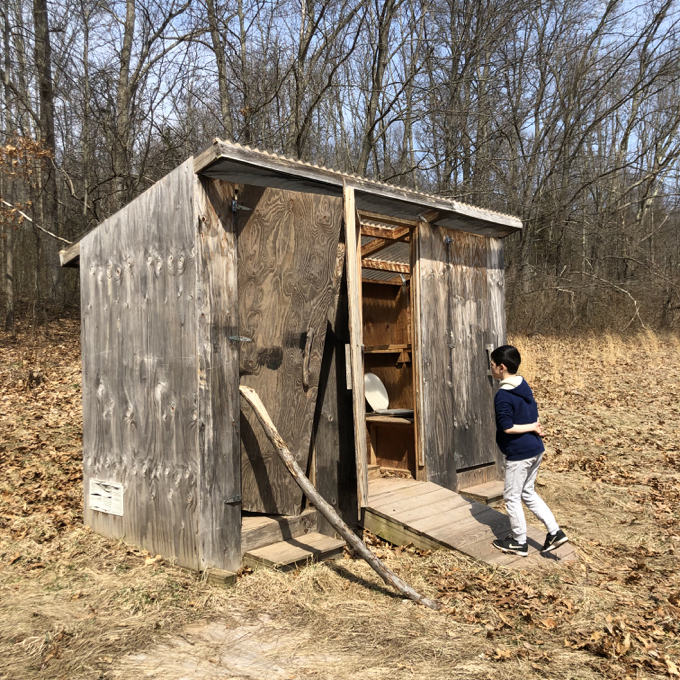 That’s right, I visited Ellington’s Batz Property twice. Not sure how many non-Ellingtonians can say that. It’s a pretty neat place and the trail is well-marked, even if it’s a bit poorly configured.

The property is named for Charles Batz, a WWI veteran and town official who lived across the street and farmed here his whole life. When he passed away in 1993, he willed his land to the town and made note that it was never to be developed. There’s a nice plaque to Mr. Batz here as well. Thumbs up to Mr. Batz and all who have preserved his legacy.