CTMQ > Everything Else > Religious > Lourdes in Litchfield

Having been to five billion sites around the state, you’d think I’d have no problem marching right in to anything on my itinerary. Oddly, that’s not the case at all. I still get cold feet now and then and the Lourdes in Litchfield shrine is a perfect example of this rare phenomenon. 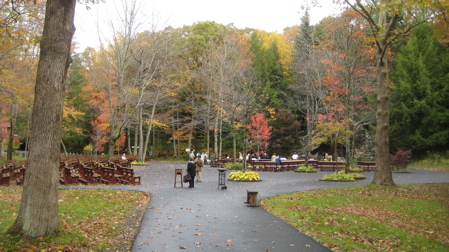 I drove into their (rather huge) parking lot by myself once but didn’t get out of my car. Then one time I did the same thing with Hoang and Damian in tow. And over the course of our three weekends in a row driving out to Litchfield and points west for the purposes of this blog (ain’t Hoang great?), I threatened to drag them to it, but never did.

Finally, on our last trip out Scenic Route 118 of the year, I carried out my threat. We drove onto the 170 acre wooded property, parked the car and got out to explore. After all, no one is going to mistake Litchfield for Lourdes in France – though it is actually debatable which is prettier. And the food is pretty good in both. But this place is like a shrine to the famous shrine. Which is a little weird to me. Of course, not being Catholic, a lot of this stuff is a little weird to me. 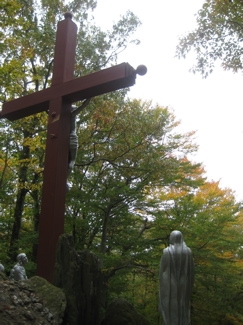 From the days of the first apparitions in Lourdes, France, people have come to the Grotto for healing and for help with their faith lives. Men and women from around the world have journeyed to this small town in France to encounter the peacefulness that Mary, the Immaculate Conception, offers. The miraculous cures of physical, spiritual and emotional illnesses testify to the presence of God’s Grace to the lowly and the poor of this world.

Lourdes in Litchfield in Connecticut is a place set aside for us when we cannot make the arduous journey to France. Since 1958 men, women and children have come to this simple grotto and encountered the loving and tender touch of God through Mary. Numerous people find this to be a place of tranquility and conversion, for themselves and for those who are held in their hearts.

Make the effort to come and experience the love God has for you in Jesus Christ. Make the sacrifice of time and effort to come here and be overwhelmed with the natural beauty of God’s creation as we pray in this cathedral without walls. 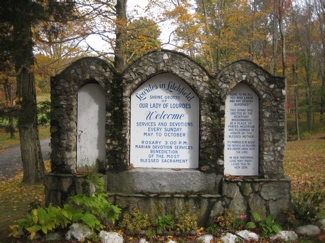 I must admit up front that we went there with no hope for miraculous cures of anything. Maybe that was our problem, because we were wholly unchanged upon leaving the property. Oh well.

The Shrine of Lourdes in Litchfield was constructed 50 years ago fashioned as a replica of the Lourdes Grotto in France. That was where, in 1858, a young peasant woman, Bernadette Soubirous, had an experience of the Mother of God appearing to her with a message of hope and encouragement. Through Bernadette, Mary called believers to pray and to allow the grace of God to transform. Over the years, Lourdes in France has developed into a place of prayer and pilgrimage. In a similar way, Lourdes in Litchfield has become a place where each year thousands of come on pilgrimage. 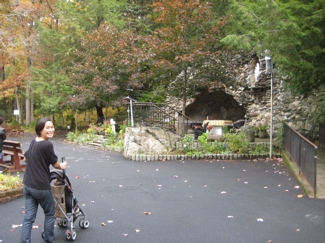 I don’t really understand all of that, and I’m not here to insult those who do. When Hoang and I were in France, we drove north of Lourdes and can report that we were stuck in traffic for a while with buses full of nuns on their way south to the shrine there. Here in Connecticut, of course, the shrine is a shrine to that shrine. I don’t know how that works, or how the miraculous apparitions halfway around the world have any effect on a hill in Litchfield, but we’ll roll with it. 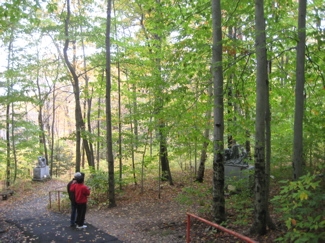 The grotto itself was built of local fieldstone by two Montfort brothers, Brother Alfonso and Brother Gabriel, with the help of Montfort seminarians and people from the area. Open air mass is held in the grotto from May through October. The Grotto is complimented by a newly renovated and restored Way of the Cross that winds its way through the hillside overlooking the grotto. At the top, there’s a giant crucifixion scene and you can also walk paths leading to shrines of the Sacred Heart, St. Joseph, St. Jude, St. Michael, and St. Louis de Montfort. These Shrines have been a ministry of the Montfort Missionaries since 1958. This is a place of prayer, peace and celebration for all people. 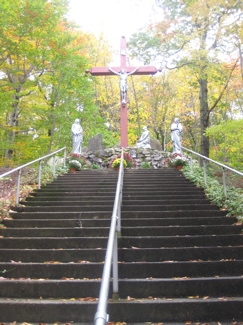 Okay, I was not “wholly unchanged” as I wrote earlier. I learned what “The Way of the Cross” is, and I probably burned a few calories following “the Way” up the surprisingly steep hillside. So here’s the deal, as far as I can tell. The Shrine is undeniably pretty, especially in the fall. The walk to the little grotto thing where services are held is alongside a stream and does have a very peaceful feel to it. When we arrived, there appeared to be a service about to start, but I’m not sure. I think people just go there at all hours (it’s open dawn to dusk year round) to sit and pray and meditate or be in the presence of Mary statues or something. Everyone did look very purposeful.

Even me. For I had to capture Lourdes in Litchfield for the purposes of CTMQ. I noticed the paved path leading away from the grotto, so I left Hoang and Damian (who was feeling particularly lazy in his stroller for some reason) and began fast-walking up the path. The path has rather well done sculptures of the various Way of the Cross stations. 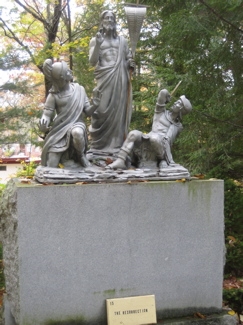 For you non Catholics like me, The Way of the Cross refers to the depiction of the final hours (or Passion) of Jesus, and the devotion commemorating the Passion. The tradition as chapel devotion began with St. Francis of Assisi and extended throughout the Roman Catholic Church in the medieval period. 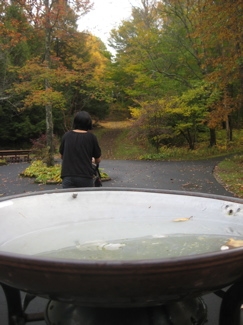 Traditionally, The Stations themselves are usually a series of 14 pictures or sculptures depicting the following scenes: Jesus is condemned to death, Jesus is given his cross, Jesus falls the first time, Jesus meets His Mother – so on and so forth (he falls a lot) – then is crucified, dies, is removed and laid in a tomb. Although not traditionally part of the Stations, the Resurrection of Jesus is sometimes included as a fifteenth station. 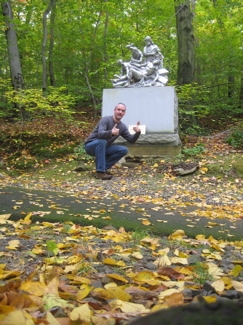 The path up the hillside behind the grotto in Litchfield is pretty nice. However, the asphalt used to pave the path was covered by slick moss in some places, and is really dangerous for the elderly faithful to make the trek. Like Jesus, I fell. Maybe that’s the point?

Once up to the top, I stared up at Jesus on the cross. The view out across the valley was ruined by the fog and drizzle, but the Brothers have clearcut a bunch of trees in order to make it prettier on clear days. 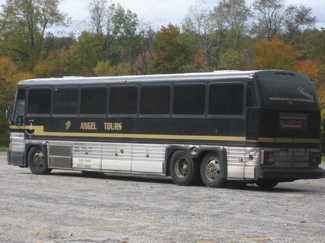 I continued to follow Jesus’ journey down the hill – and man, it’s REALLY steep here – and it was all very pretty. I’ve never been partial to the gory side of Catholic idolatry, but there were plenty of people there staring at the sculptures and yes, even taking pictures. One couple (I took a picture of THEM), was taking about 10 pictures per station! I suppose they were actually on a pilgrimage to Lourdes in Litchfield!

Back at the bottom, I saw Hoang and Damian wondering around in circles waiting for me, so I quickly went into the building to see what was in there. It’s called Pilgrim Hall and contains a large giftshop (of course) and The Grotto Café. There was nothing for me in there, so I went back outside to my family. 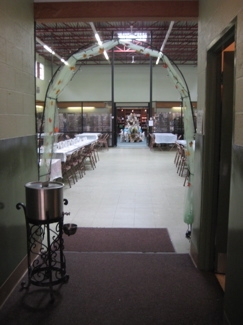 If you are so inclined, the shrine can do a “full pilgrimage” for you. This lasts from 10:30AM to 4PM and you get to do all sorts of praying and baptizing and communioning and stuff. I’ll say this, it’s certainly a beautiful place to do such a thing, if such a thing is your wish.

One last note: Every year in mid-May, they do a “Blessing of the Motorcycles” there. I suppose all the local Catholic motorcycle gangs descend upon the shrine to get blessed to have a safe year of riding.

One more time… I just don’t understand this world. But I’m fine with that. 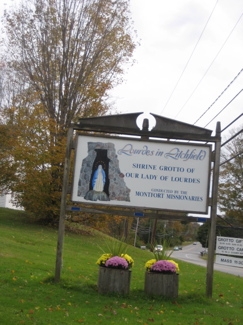