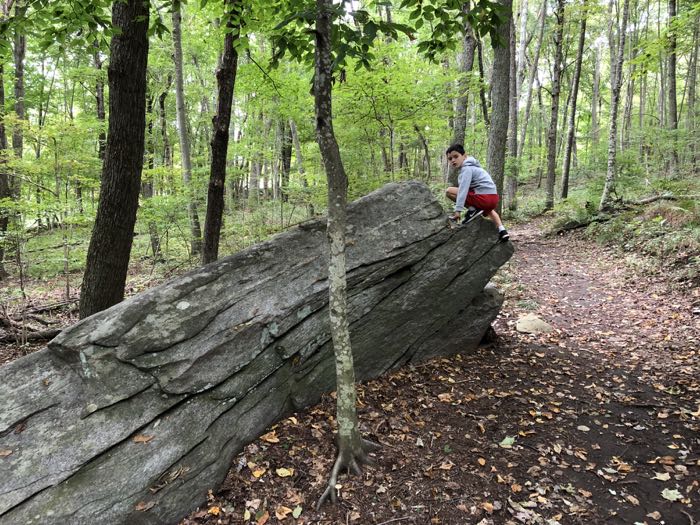 BOZRAH HAS A TRAILED PROPERTY! Here’s the thing. From 2006 to 2011, I often lamented the extreme dearth of “things to do” in Bozrah. There was, quite literally, nothing. This made Bozrah my go-to town to make fun of in presentations.

They still have no museums in 2018, but in 2011, they cleared some trails! Cool trails! And while I found a few other things to do in town in the interim, I saved Maples Farm Park for last. Because really, these trails are the only true “Bozrah” thing in Bozrah for me to CTMQ. 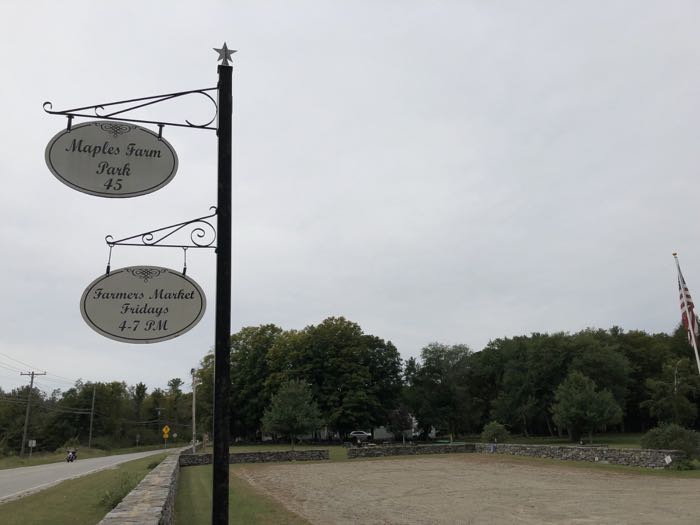 The trailhead is located behind the field where the excellent Bozrah Farmer’s Market is held. If you don’t know where that is, it’s where literally everything in Bozrah is. The Senior Center, the ballfields, the Alpaca Farm, the library, the public works department… It’s on Bozrah Road. In Bozrah.

Calvin was curious if this hike would be “cool” and I assured him that it wouldn’t be. (We were in Bozrah.) Fortunately, he A) didn’t listen to me, and B) I was wrong. 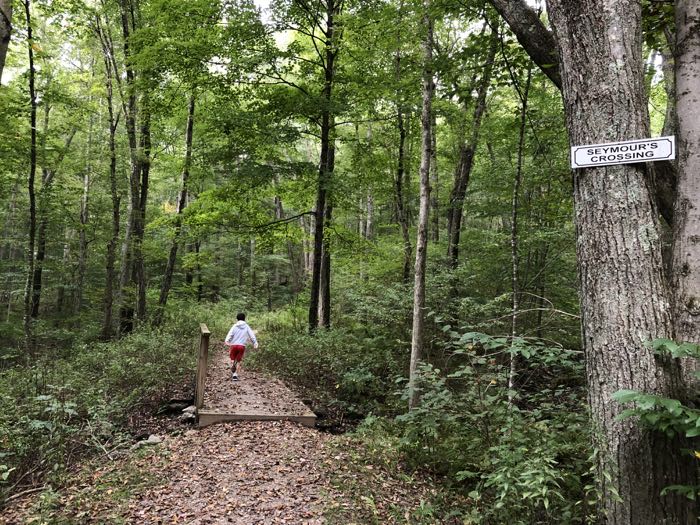 There is a trailmap at a kiosk at the trailhead (at least on the Farmer’s Market field side… not sure about the ball fields entrance) which is nice, except no one has bothered to actually blaze any of the trails.

This doesn’t matter, as all trails lead back to the bottom, but it is kind of weird when the trail map is in different colors but – oh never mind. The trails do have names and there is nice signage in the woods. Shady Hollow Trail, Stonewall Ridge Trail… that kind of thing. 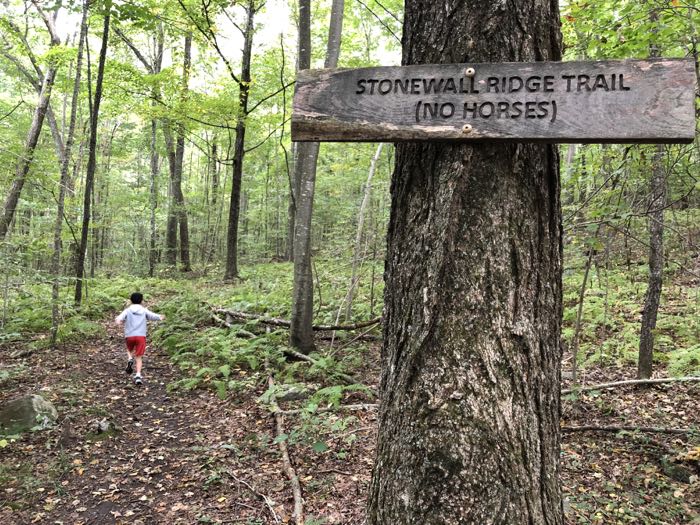 The blue trail has a sign that says it is a one-way trail, which I found absurd. But we followed its orders and did a big counter-clockwise route – therefore coming down the right way of the one-way blue trail.

Oh yeah, I had the pleasure of hiking with Ninja Calvin today. 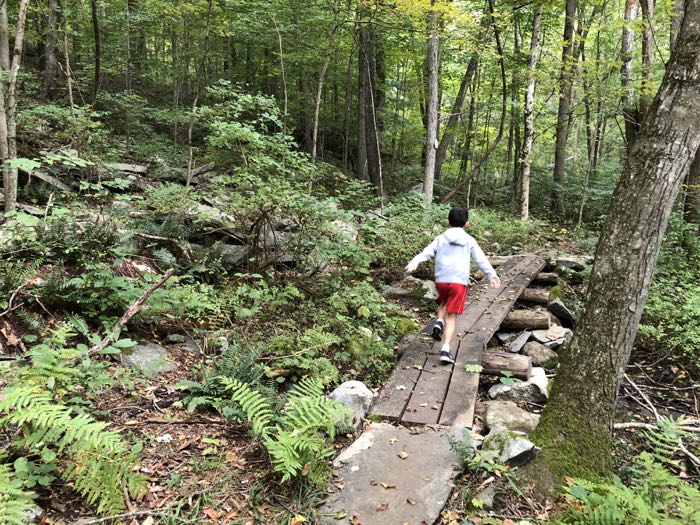 If you are unfamiliar with Ninja Calvin, he’s a, um, ninja. And as all ninjas and students of ninjas know, the fastest, quietest, and most efficient mode of self-transportation is to run with one’s hands behind them.

This method of speed-running was popularized by Naruto Shippuden. I’m sure you’ve all watched the 500 or so episodes on Crunchy Roll, but for those few of you who haven’t:

And so, we were off through the wilds of Bozrah. Down and around and up the little hill. I found it difficult to keep up with Calvinuto, but I did my best. I was surprised at how many large rock outcroppings, cliffs, and clefts were here at Maples Farm.

I guess I hadn’t really thought too much about Bozrah’s geology before, but yeah… there is some. The purple trail (not blazed purple, but purple on the map purple) is worth the effort to get to, as it passes beneath some cool cliffs and crosses streams. It really is a rather pretty area. 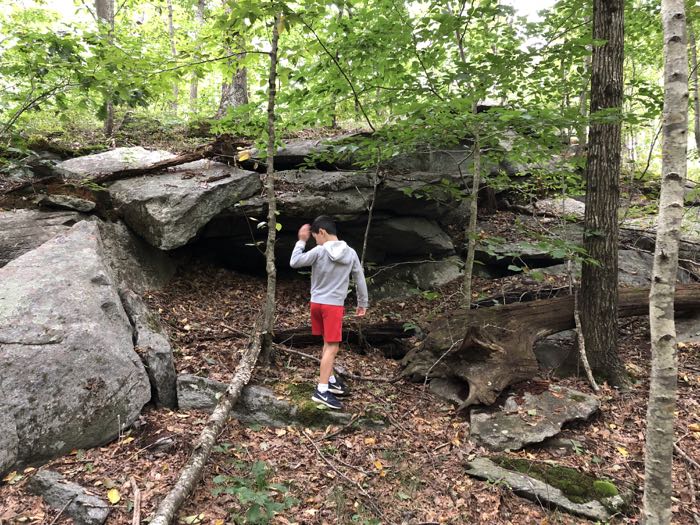 We were promised a view at some point, but before then, we got our first taste of the switchbacks here on the red trail (not blazed red, but red on the map red). This really allowed Ninja Calvin to fly! 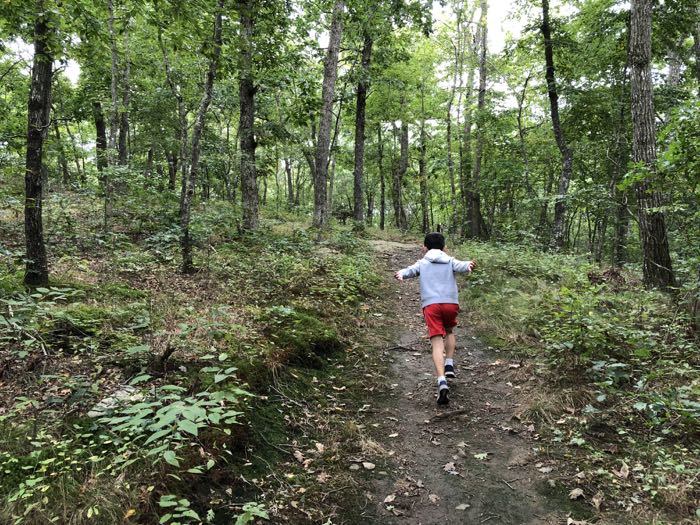 Here I was, truly enjoying Bozrah. The trails at Maples Farm are very well cleared and a focused effort was made to take in every cool natural feature of the hillside. I very much appreciate that.

We made it to the much-heralded view and took a quick break. 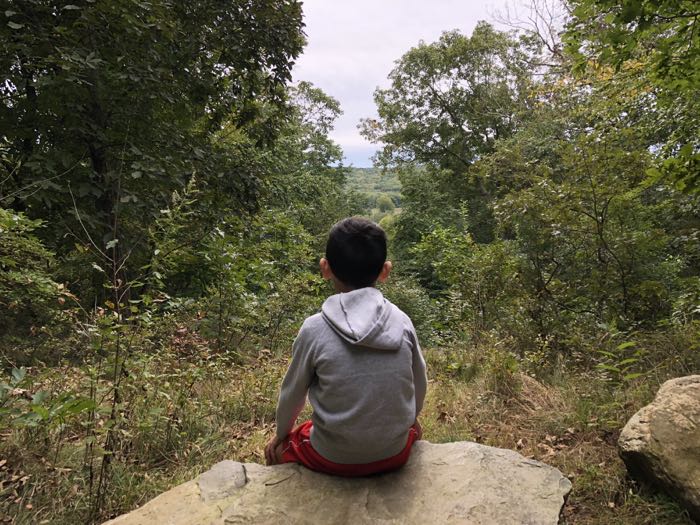 It’s true. Even ninjas get tired once in a while. But not for long, as we were soon on our way down the hill via the one-way blue trail (not blazed blue, but blue on the map red). Holy cow, this is fun!

Turns out that (I hope) this trail was made specifically for mountain/BMX bikers. I read that somewhere and it has to be true. The entire trail is just a series of S curves from the top to the bottom; many with embankments even. 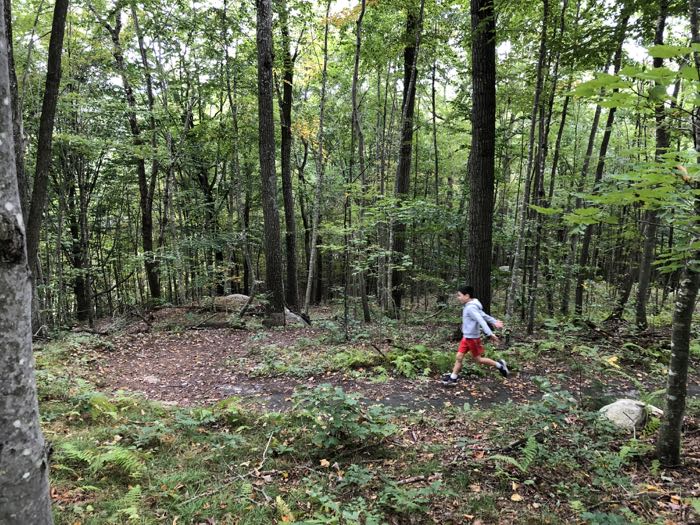 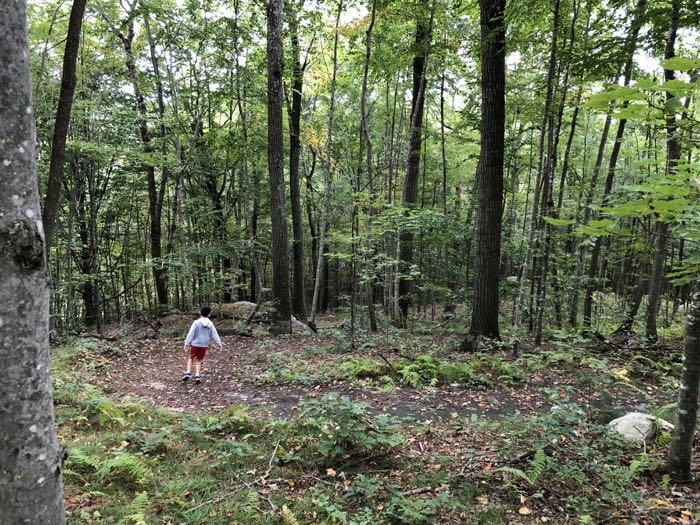 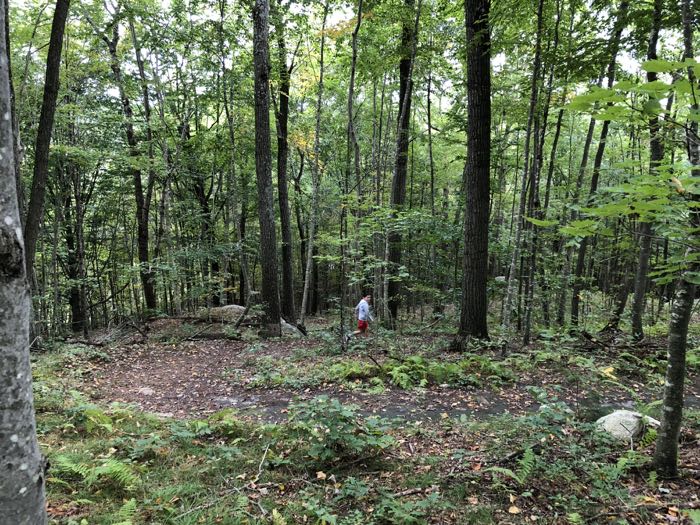 This continued all the way to the bottom, near where there are even some jumps purposely built into the trail. Hats off to Bozrah; what a great idea and very well executed.

You know what’s not well executed? This page. If it was, I’d have bothered to stitch the following pictures together into a cool little gif. Oh well. 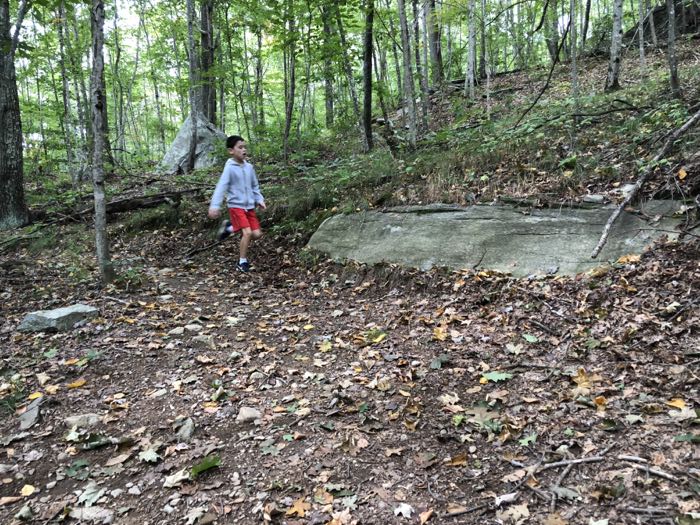 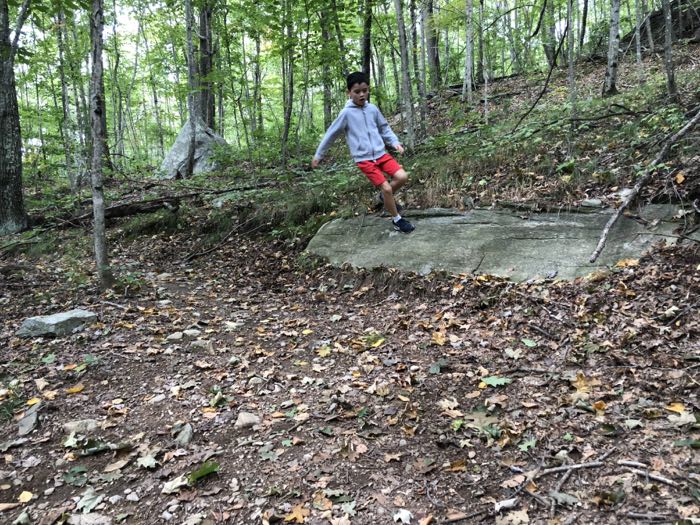 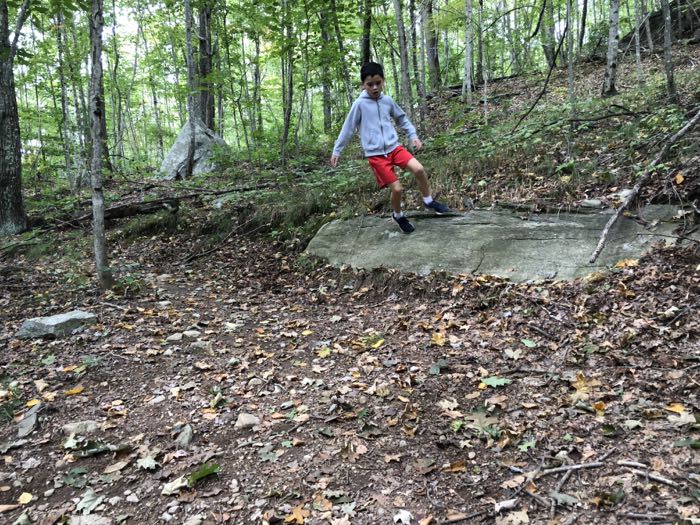 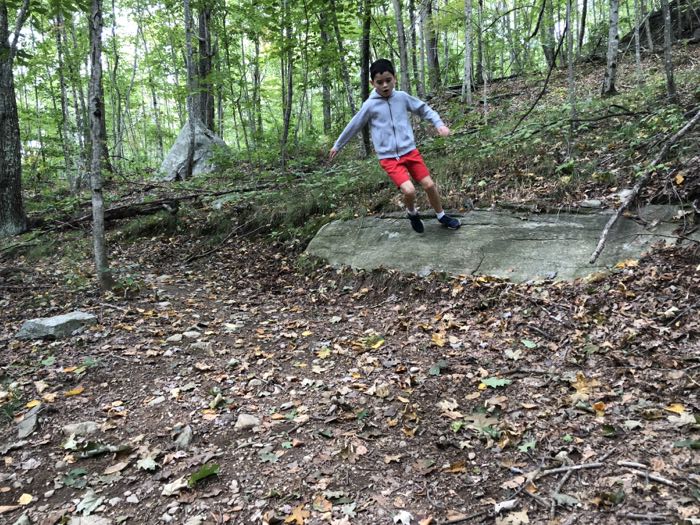 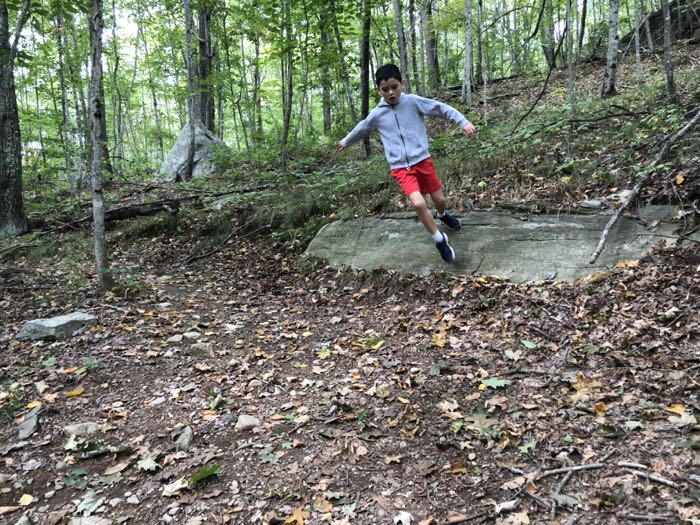 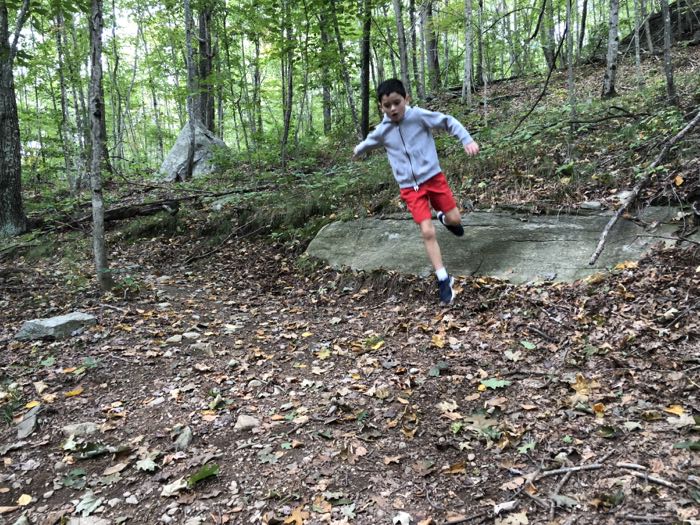 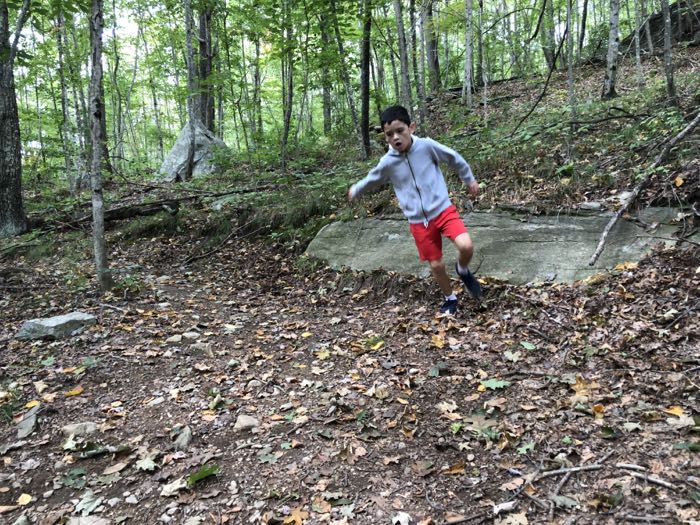 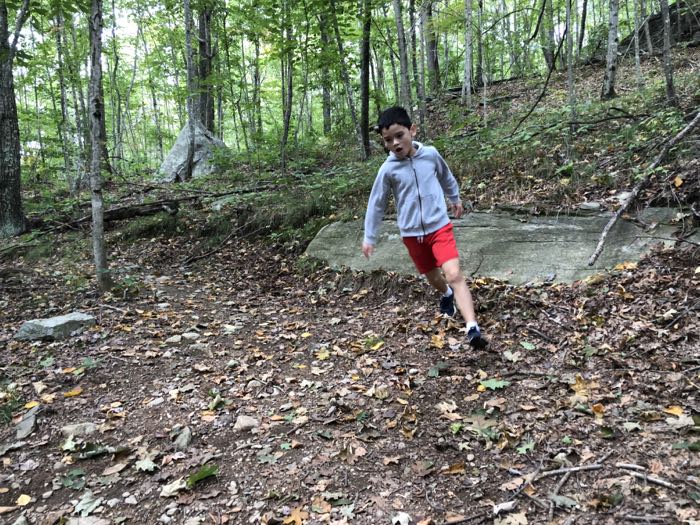 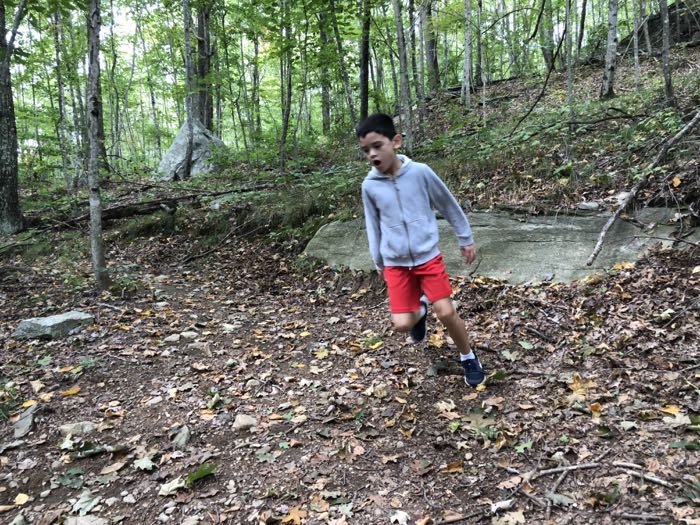 This last jump took us to the final two banked turns and then out to the main trail to the car. I’m pretty sure that we hiked this entire property faster than anyone other than real trail runners. But when you take to the woods with a ninja, you simply have no choice.

I’ll go out on a limb and say that the trails at Maples Farm Park are the coolest thing to do in Bozrah. 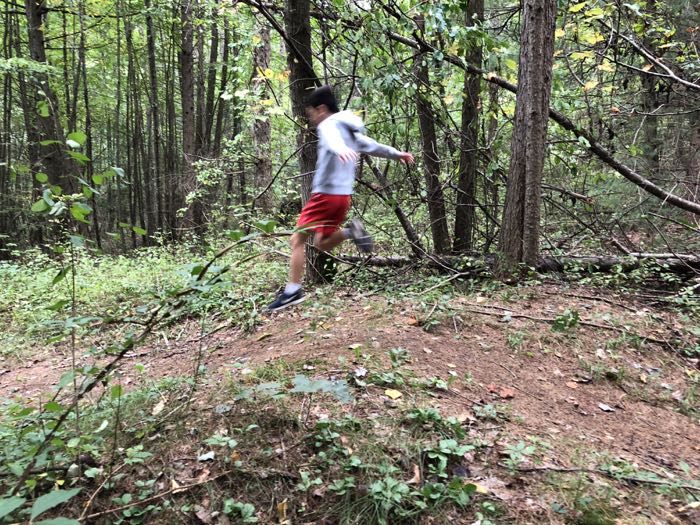