North Granby. North Granby? Of course it’s just the northern part of Granby proper, but it really has a distinct flavor of its own. And that flavor is beautiful and remote. North Granby is way more Hartland than Granby. 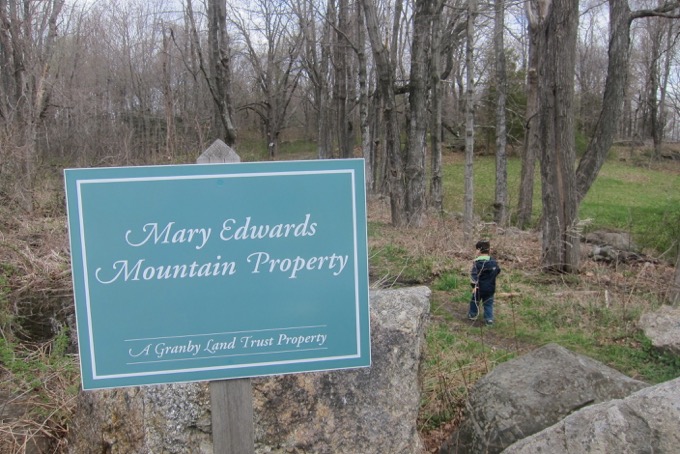 And when it comes to hiking endeavors, that’s only a good thing – unless you get mauled by a bear, bobcat, or Connecticut coywolf hybrid, because now you’re an hour from any sort of medical facility.

Once again I packed up the boys and decided to head north mere minutes before we left. (I have a bunch of maps printed and sort of just thumb through them looking for hikes I can do with them.) I encourage all organizations who publish trail maps to include contours. In my case, with little boys in tow, I want to be sure I’m not heading off to some super steep climbing and descending. Granby Land Trust does not include contour lines… 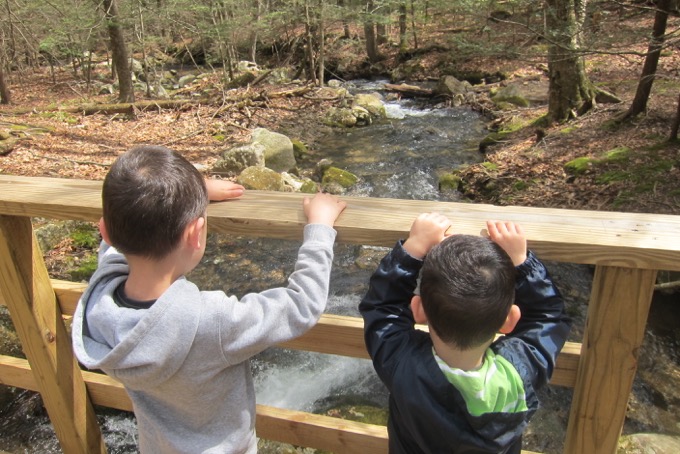 Though, in their defense, the Mary Edwards Mountain Property is located along Mountain Road. Blithely, I drove up 189 and then left onto said Mountain Road. (By the way, I live off of Mountain Road in West Hartford and for the record; it is as flat as a pancake for every one of its several miles.)

North Granby’s Mountain Road is decidedly not flat. While driving up it, I began to think, “Hm. This could be a problem.” There is a pullout for hiker parking at the trailhead and whoa. The view! Of all the trailheads in Connecticut, this one may have the best view. This is facing northeast and while my picture (as usual) stinks, one can see Springfield and the Mt. Tom Range in Massachusetts and a huge swatch of the Connecticut River Valley. 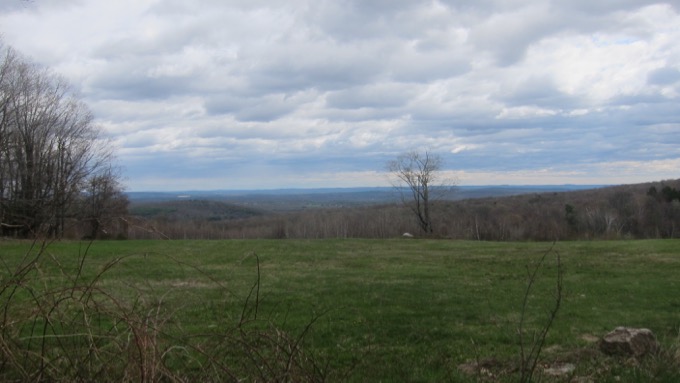 The view at the trailhead 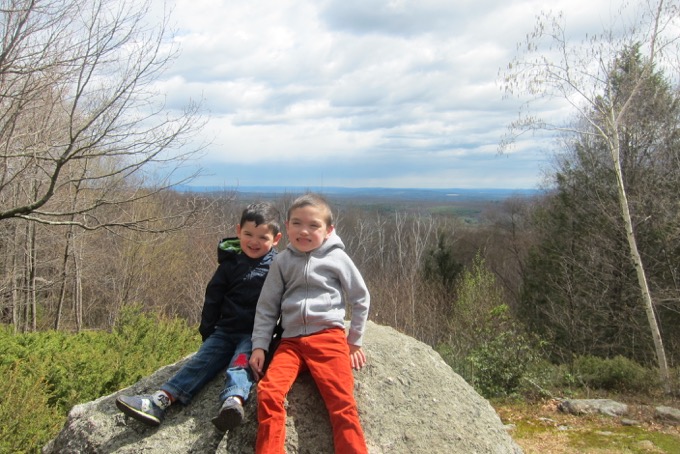 Four minutes in, I began to love this place. With wind whipping and clouds rolling above, there is a short section of trail that feels very New Hampshire or Maine-ish. Ground stone trail, short evergreen shrubbery all about, lush mosses and dwarf highbush blueberry plants… … it was awesome. So is this picture of Calvin in his octopus-patched pants: 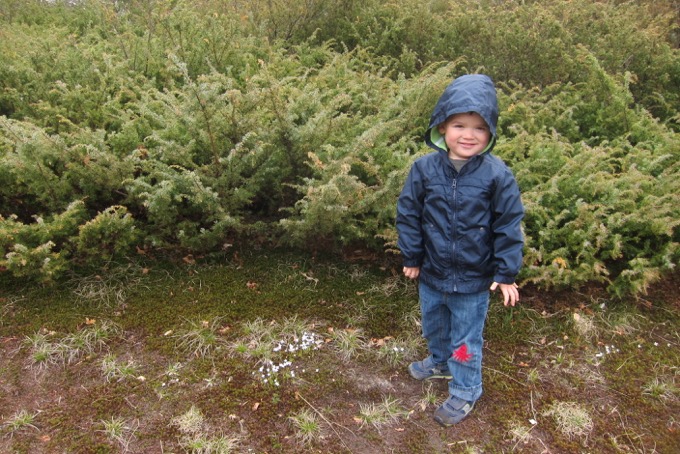 Shortly past this stretch is the highlight – for some – of the 200 acre Mary Edwards Mountain Property: Mary’s Rock. In short, Mary Edwards was a rather wonderful person. She personally helped the Granby Land Trust from the ground up, and slowly deeded property to them over the years. You should read her whole story here – and be sure to check out the second page with the picture of a very young Mary atop her rock. 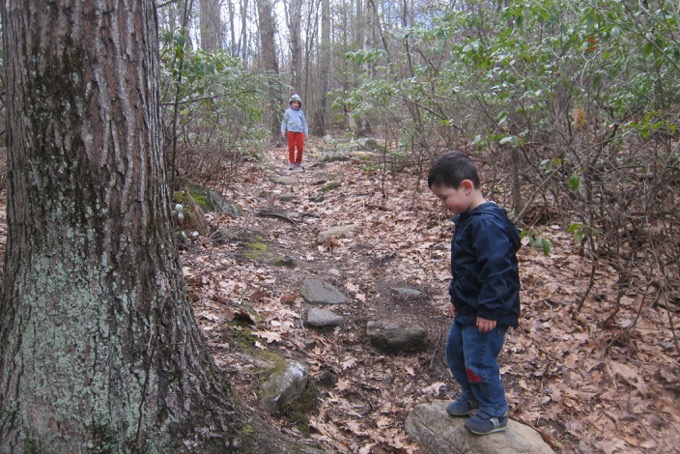 One person can make such an enormous impact on our world — especially in a small town like Granby. Take, for example, Mary Edwards. How would Granby’s landscape differ if Mary had not supported the Granby Land Trust over the course of her life? For starters, a great deal of our remaining open spaces would most likely be dotted with houses. Mary donated more than 250 acres of her land to the Land Trust, most of which would be considered prime real estate for a builder. But that’s not all Mary contributed to the Land Trust. When it was just a fledgling organization, striving to establish itself in town, Mary supported the Land Trust wholeheartedly. Without Mary, one wonders whether the Land Trust could have become the powerful force that it is. 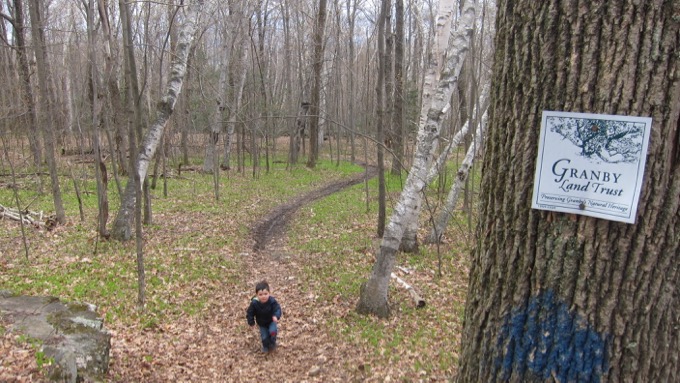 Without Mary, one wonders whether the Land Trust’s motto, “Working to Preserve Granby’s Natural Heritage,” would have the hollow ring of wishful thinking. Within a year of the Land Trust’s founding, Mary contributed [a bunch of propery]. She did not contribute her dearest possession, however. Instead, she continued to own and steward the magnificent 200-acre “Mountain” property at 200 Mountain Road, just to the north of its intersection with Silkey Road. With sweeping views of Springfield, the Connecticut River Valley and Mount Tom, “Mary’s Mountain Property” was and continues to be one of Granby’s most beautiful places — a place where people go to watch Fourth of July fireworks in distant towns, to see the fall leaves turn color in the valleys below and to hike to “Mary’s Rock” for a picnic or a moment of quiet contemplation in a beautiful place.

Wow, this would be a wicked cool place to watch fireworks from far away. Again, reading the full page about Mary gives one a great appreciation for her dedication and contribution to the town of Granby.

Past the rock and its beautiful viewshed, we continued northeast along the blue trail. One can continue along the blue trail out to Donahue Road and the Preserve. That wasn’t in the cards for me, what with a barely three-year-old and his special needs brother. 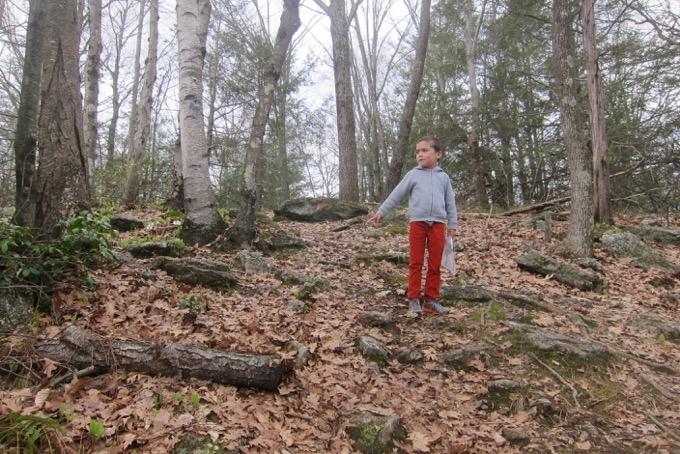 (We did hike over there later on in September, here.)

There was a particularly steep section here, which Calvin nimbly descended, but I knew Damian would have trouble. I offered my hand and he told me his newest phrase: “I got it.”

I can’t make this more clear: Six months ago, NO WAY would he have even thought of going down this rocky slope by himself. Two months ago he’d have asked for help with a held hand. But this is the new Damian! He stared ahead, determined to do it on his own. 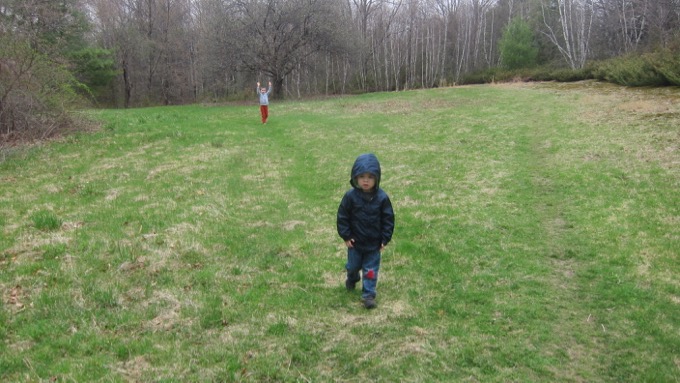 He stepped… then a bigger step… then gravity took over and he was flying down the hill.

He yelled and took a rather spectacular fall forward. He cried. But it was his “embarrassed/attention” cry, not a pain cry, thank goodness. Amazingly, he got up and let me clean him off. A kiss and a hug and some words of encouragement and he was on his way again.

You can’t understand what a massive step this is for him. I was proud – and a bit startled by what could have been a rather disastrous tumble. What if a rock was in the way of his face? Ugh, I hate that feeling. But don’t tell him or my wife that. 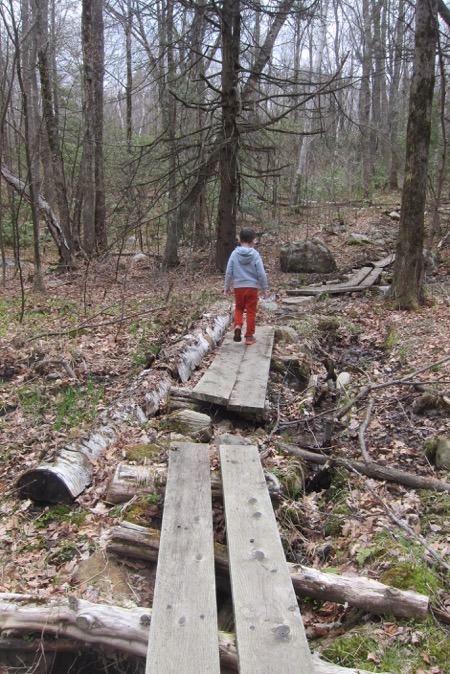 Once hooked back up with the yellow trail, the trail descended again. And kept descending down, down, down into the ravine. Damian took his time and slowly kept plugging along behind us. But HE was doing it and he wasn’t complaining. I had to shout ahead for Calvin to slow down and in the same breath turn around and tell Damian to keep moving. Parenting is hard.

Once finally at the bottom, and trying to keep the thoughts of “holy cow, we have to go back up this hill to get back to the car” out of my head, we sidled up with Ring Brook. 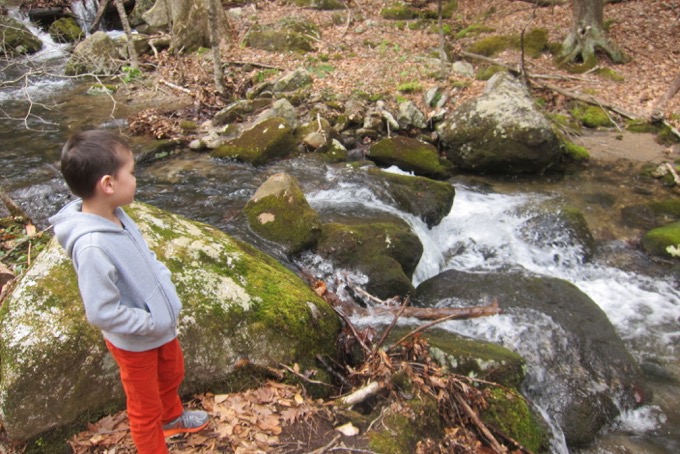 And it’s beautiful. The trail skirts the brook for a good third of a mile or so, and passes two bridges which take hikers on a short blue loop trail if they so desire. We didn’t desire.

The trail along the brook is rocky and rooty, but the boys navigated it well. At one point I told Calvin to wait while I went back to help Damian over some muddy areas (he will NOT get his shoes wet or muddy), but Calvin kept going – straight into a mud pit. Ugh. 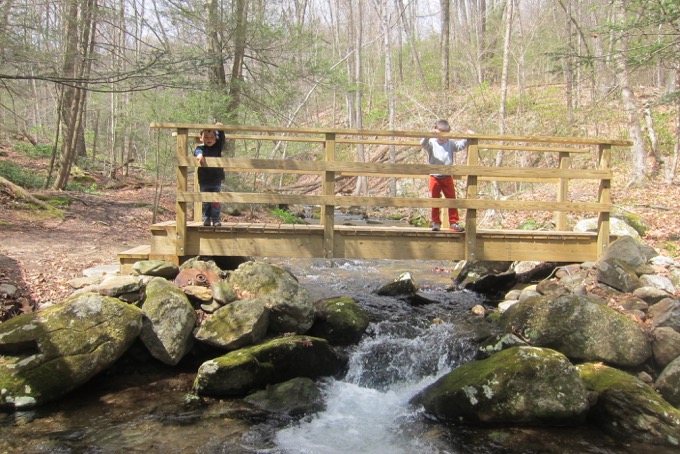 Turns out, Calvin also hates having soaked and muddy feet.

Many of the ferns were just starting to come up along the brook, but clearly, this place is probably otherworldly in June. The thick canopy of hemlock and pine give it that primordial feeling I love and with a thick blanket of ferns, I’m sure it’s just a really, really cool place.

The brook itself has enough tumbles and mini-falls to keep my boys fascinated along its length. It looks clean – almost pristine, and the year’s first wildflowers had sprouted: 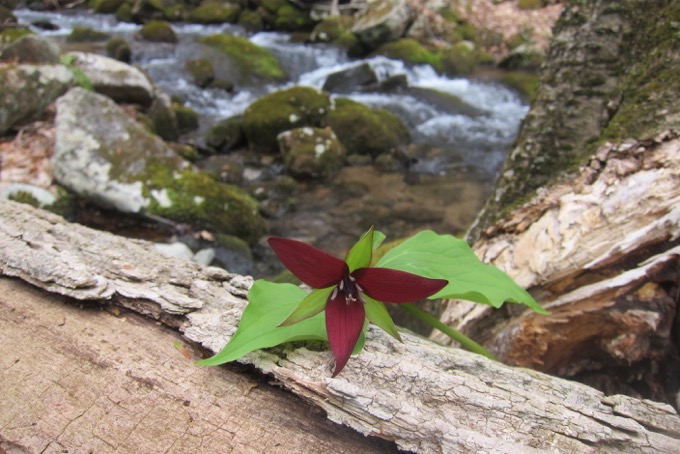 On Facebook, via my friend Julie, I learned the following about this pretty little flower: “Trillium aka Wake Robin (because of its early blooming) and Stinking Benjamin (because it has a foul smell that attracts carrion flies for pollination). It was once used to treat gangrene (like smells). Such a glorious flower!!!”

We took a break at the second bridge (going counter-clockwise) and the boys enjoyed their juice boxes, so all was well.

Then it started raining.

Turns out, Calvin also hates the idea of, and I quote, “It’s gonna rain real, real hard! Uppy Papa!” So I picked him up for a bit and was pleased that the first bit of trail back up to the car wasn’t very steep. Damian, again, just trudged along behind. I love that kid so much when he’s being a typical kid.

About half way up the hill, I realized this: I was very fortunate to have hiked the yellow loop counter-clockwise. The descent down was steep in several places – at least for little kids. Our hike back up was far, far more gradual and therefore quite doable for my boys. (I had Calvin walk up the hill as much as I carried him – but my carrying him was because of the rain and his wet feet.)

We made it up and back out to the car in about 90 minutes I think, which I thought was pretty good. Near the car I asked them to raise their arms in celebration. Only one complied: 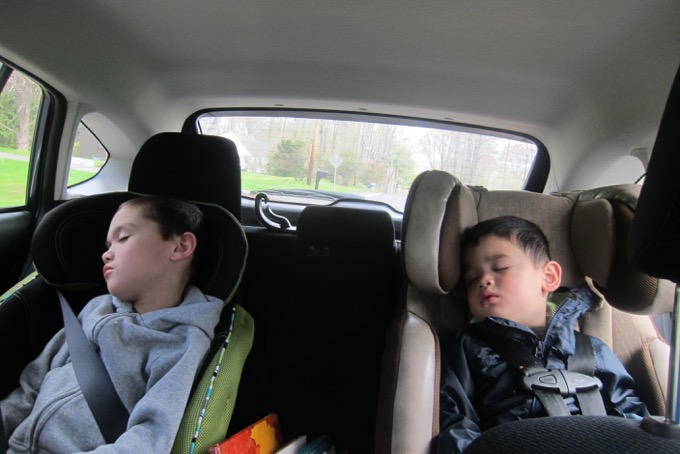 As with all hikes at this age, the ride home was peaceful

I can’t recommend this place enough. If you live in Greater Hartford and have grown tired of Case, Talcott, Penwood and Ragged – GO HERE. Double it up with the Godard Preserve to make a longer day out. Stop by the Lost Acres vineyard afterwards which is nearby. I loved it here and will probably come back on my own someday to do a little more poking around without worrying about my children tripping and falling into Ring Brook.