You know what the most ridiculous thing you’ll read today is? This: I don’t think anyone else has ever used “Hiking Sessions” as a title for a description of hiking at Sessions Woods. What the heck is wrong with people? Is there really any other title for this? 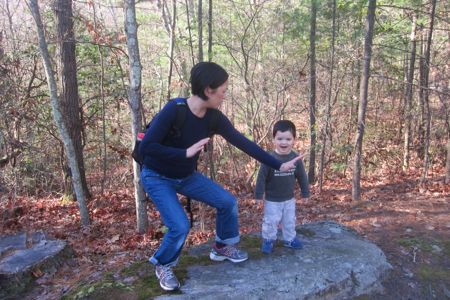 My relationship with the 455 acre Sessions goes back several years, to the earlier days of CTMQ. Back then, when I was taking my son Damian to every nature center in the state, this one confounded me for not being open on weekends. We eventually got to it, of course, and it’s a perfectly suitable nature center.

My first hike through Sessions was along the Tunxis Mainline trail (changed to the Yellow Dot in 2014) with my friend Rob. We ended our day here and… you know what? There’s a bunch of stuff going on at Sessions, but this page is pretty much focused on the trails that aren’t the Tunxis Trail. Here’s all my Sessions Woods stuff, all of which is touched on below. 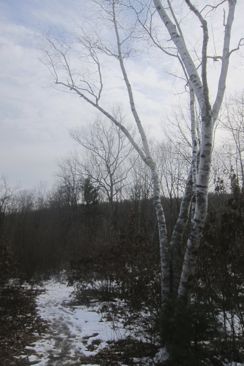 That hike was when I first came to appreciate the extensive signage that dots the entire property. They do a really nice job of explaining the various things hikers encounter. Different habitats, animals, trees, as well as forest management programs.

There are four trails here and several little spur trails to points of interest. Additionally, the Tunxis Black Dot skirts the southern border of the property. The only reason for me to make the effort to complete all four – as well as all the little spur trails of course – was to become a Burlington Trail Master. 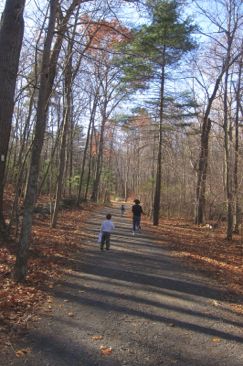 Anyway, back to the hikes here. I highly recommend them for young and old. The main Beaver Dam trail is quite popular and if there are 40 cars in the parking lot, 35 of their former occupants will be somewhere on the Beaver Dam Trail.

This page will cobble together three different trips to Sessions, but my exemplary writing skills will make it seamless to the reader.

It seems like the large majority of people hike this one counter-clockwise. I’m not sure, but I think doing so gives you less elevation gain. So of course I will be talking about my various hikes of the loop trail clockwise. 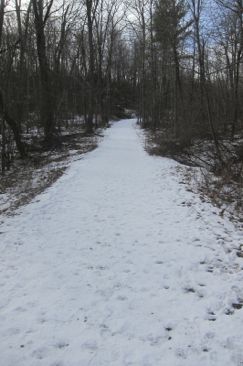 Starting at the main lot, you can find the trail off the south end of the lot sort of behind the maintenance area. There’s a (usually) closed gate to a road – find that and follow the road and pick up the blazes.

The Beaver Dam Trail is a wide gravel road that circumnavigates the wildlife management area. I had promised my kids that we’d “see water” and that was good enough to keep them going. Past the “outdoor classroom” which is just a little amphitheater of sorts and something called the Summer House which is… I don’t know what it is. It’s just a woodland house in the woods. 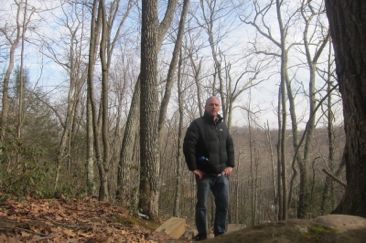 The thing with hiking with little kids is that they just want to run down hills. And while this “trail” is certainly a drivable road, it’s a crappy drivable road so there are rocks and stuff. As a result, my little one’s enthusiasm got the best of him more than once as he fell a few times.

The other thing with hiking with little kids is that they don’t really care I they fall, because they’ll get right back up and continue the same behavior that precipitated the fall.

As it was lunch time and all this running and falling was making them tired, I came to realize this promise of water was turning out to be an unintentional lie.

When we made it down to the Youth Camping area, this intrepid family set off to find the connector trail over to the Tunxis Black Dot. One problem: the camping area was being used by a rather large contingent of campers.

We bumbled down the road to their camp and realized that the connector, which would cross Negro Brook (and water!) was right behind a large group of adults sitting around smoking and whatnot. 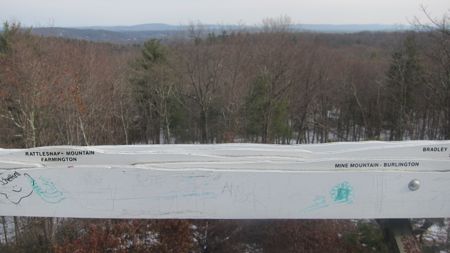 The view of the Talcott ridge from the observation tower

None of them paid us any mind, despite the clear fact that my kids are super cute. Who were these people? I asked them where the connector trail was and they all stared at me like I had asked them when the next X-Wing Fighter to Alderaan came by.

Their “living room in the woods” set-up totally blocked my way, and they seemed peeved that I was peering beyond them when I walked near. Whatever. 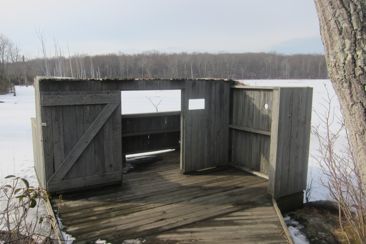 Decision time. Hungry family and tired little 2 year old legs told me I had to act fast. (I should note that we had PLENTY of water and snacks. Like, enough for an entire day. But my kids are greedy little fatbacks sometimes.) I told Hoang to hunker down and I’d run up the hill, get the car and meet her at the secret little (usually gated) fire road off of route 69.

So that’s what I did. Then we all went to Firefly Brewing in Bristol and had a grand ol’ time.

A few months later, I returned to not only complete the Beaver Dam, but to pick up all the little side and spur trails for the Burlington Trail Master.

I parked off of Route 69 near the Black Dot and took that confounded connector back up to the Beaver Dam. And yup, those campers were blocking my access a few months prior. They suck. 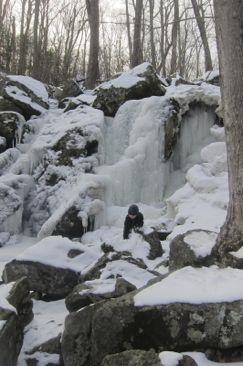 Anyway, as you can discern from the pictures, it was much colder for this leg of my Sessions Woods journey and in fact, much of the trail was covered in icy snow. This wouldn’t have mattered normally, but I was in a hurry to get done and meet my friend Chris and I don’t like to be late for stuff.

Once past the Tree ID trail junction, the Beaver Dam ascends Negro Hill for goodly while. Near the top, the spur trail to the Session Woods Waterfall heads off to the south. Here’s my separate page on the waterfall. It’s a nice little falls and the short trail down to its base is outfitted with a long series of stairs.

Back up and a little further along is the short side trail to the 750’ summit of the hill and the observation tower. I love my observation towers and yes, I wrote a separate page for that as well. I’m telling you, Sessions Woods has it all. 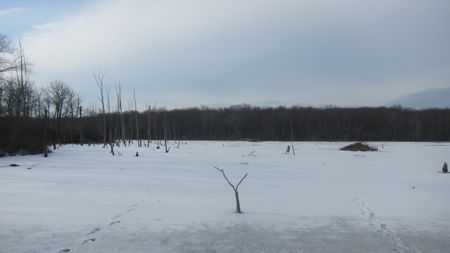 The next 200 yards or so of trail has three more little spurs off it: To a viewing blind in the woods, a duck blind on the beaver marsh at the end of a boardwalk and one to a little vernal pool, which doesn’t look like anything in the snow.

Each and every one of these things is noted with a sign explaining it. Sessions is an educational property above all else and I, for one, appreciate that. The little boardwalk out to the edge of the beaver marsh is especially cool. I’ve always been attracted to the alien-like scenery of marshes and bogs, with their dead trees and hillocks of sedges here and there. 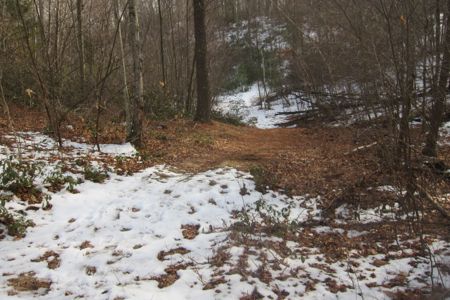 Back onto the Beaver Dam and right around a sharp bend is where the Tunxis mainline now yellow dot joins it for the walk to the visitor’s center. As I noted earlier, I did that section several years prior while hiking the Tunxis.

This short trail connects the Beaver Dam from north to south. It traverses the area below the summit of Negro Hill that was forested several years ago. It offers some educational opportunity, sure, but it also offers a shortcut, which is probably the reason 95% of those who traverse it do so. 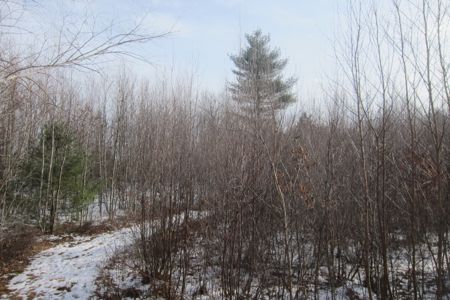 In the middle of this trail, there’s a little fenced off area that is said to be an experimental plot where the deer can’t eat the young trees. Perhaps because its winter, I didn’t notice any discernible difference at all.

Similar to the Cross-Cut, but even shorter and closer to everyone’s starting point at the visitor’s center, this trail offers the chance to bone up on your tree identification skills. There’s a handy guide you can print off, which you probably need to make your trek across this quick trail worth your while. 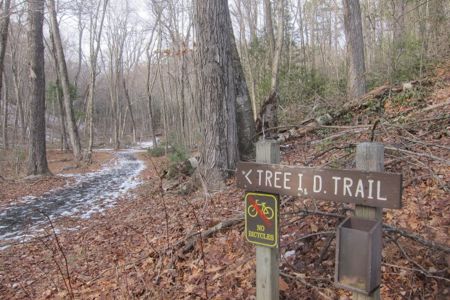 Personally, I’ve graduated from tree id’ing and now I’m on to shrubs and smaller plants. But I’m a nerd. This is a pretty flat trail and follows Negro Hill Brook, crossing it a couple times. So, y’know, be wary if you have little kids that like to step in icy water.

Ah, here’s the one you’ve been waiting for. I saved it for last. That’s called the tease, and it’s why I get so much advertising revenue from CTMQ.

Anyway, as you can see, the whole family completed this flat little gravel trail. Even Hoang joined us! Yeah!

There are all sorts of explanatory signs along the way, talking about stone walls and glacial till and bears. Everything you’d expect to see in southern New England geology and biology. The boys stopped at each sign and pretended to read it. My heart was aglow.

There are a few twists and turns to the trail, but the highlight for any 2-10 year-old are the two huge boulders that were set along the trail eons ago. Calvin didn’t hesitate to try his hand at rock climbing and I couldn’t believe at how quickly he ascended this thing. 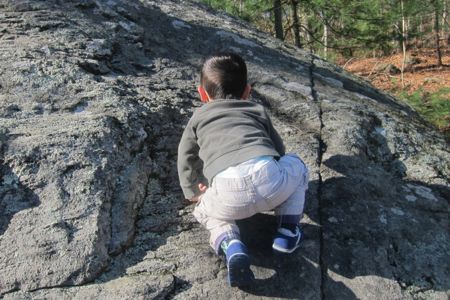 Of course, once he reached his limit, there was no way he was getting down on his own, so I came to his rescue. 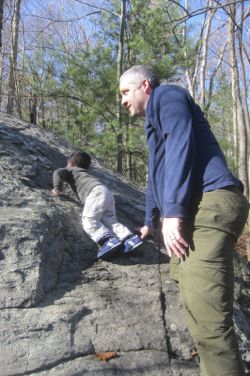 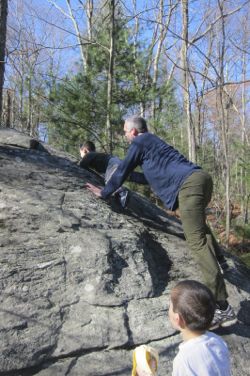 The next boulder down the trail was a bit steeper, and this is how Damian dealt with it: 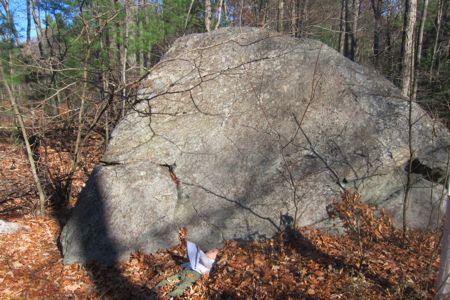 Around a few bends, we came up a bear fence. The sign here says “This electric fence will prevent black bears from destroying bee hives.” 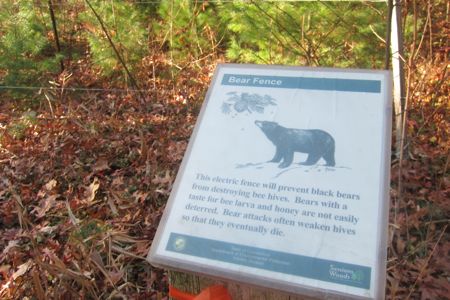 Let’s see how that worked out: 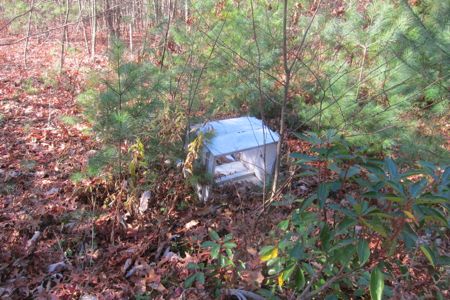 Derp. I used to read the Berenstain Bears as a kid. You can’t keep them away from bee larvae and honeycomb.

And that’s it! Sessions Woods; every inch of its trails. It’s a well-maintained and easy spot to hike, with a few nice rewards along the way. It’s only a few miles north of Bristol’s downtown on route 69, but it feels like its a million miles away. 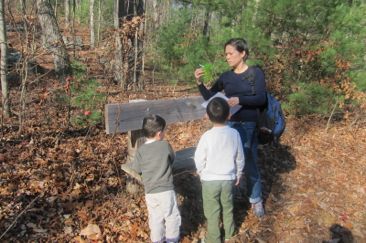 I love these clowns