Note: This page and “section” is a bit ridiculous. This was written in 2007, so please forgive me. Some of the description below is no longer apt, as the trail was taken away from some of the development and a lot of the development never actually developed. If you want to start at the beginning, go the Metacomet Intro here.

What an odd and eclectic little 1.8 mile section this is. I certainly never expected this after-work walk/jog to take in such a wide array of landscapes and twists and turns. (Then again, how could I have? Since this is the first detailed description of the Metacomet that I’m aware of.) We had tried to nab the last short section after work one time and that didn’t work out. This time, I was determined to get out of work 15 minutes or so early (which in reality would be closer to “on time”) and get in the hike before picking up our son on the way home. 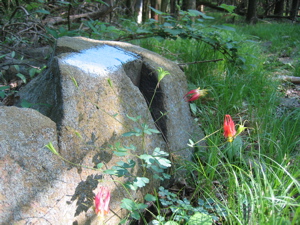 We tried it once prior and were deterred by uncertainty about the length of the section. Then we finally said, “let’s just do it already,” and so it was on a Tuesday with absolutely perfect weather we sped out of work at 4:45, dropped off a car at the end of the section – sketchy spot at the Route 71 crossing near the Berlin-Meriden border – and raced back over to the Summit Wood Drive crossing where we’d last left off. A quick change of clothes and we were off! Here’s Hoang, right where we left off last time: 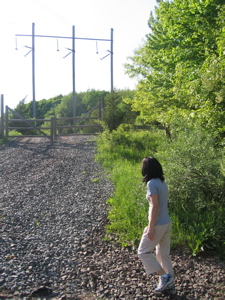 Thankfully, the trail took an immediate and abrupt turn left, leaving the rather massive power line cut and paralleling Summit Wood. It crossed in front of a few rather nice houses and then entered very pleasant dark evergreen forest at the cul-de-sac at the end of the road. Interesting note: On the Connecticut Walk Book map, there is no dead-ended road; it extends and then turns west (as “Victoria Road”) all the way down to Route 71. There is ample evidence that the initial stages of this road are underway, as the trees have been cleared and the little orange flags have been placed. 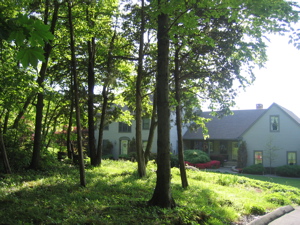 2019: The road was never connected, but there is a path connecting the two roads.

So pity the poor Metacomet Trail which will have to deal with this development in the next year or two. As it is now, the trail wends it’s way initially below the bulldozed swath, crisscrossing a bevy of other ATV trails that have been cleared for their destructive hobby. In order to do so, and in order to at least try to stay true to the ridgeline, the trail (much like the Crooked Brook section) appears to have been cleared by someone following the flight of a drunken bumblebee. That said, it is very well marked and it is surprisingly interesting. 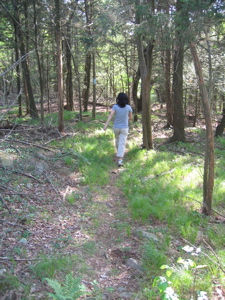 Once we passed the crazy right and left hand bends and reached the ill-defined ridgeline, the trail straightened itself out and entered an oddly serene section through forest grasses and a spruce/pine mix. There were several points along the way where Hoang and I thought, “Boy, this is quite nice.” There were other sections where my spry little wife felt that jogging was a better way to get to where we were going – which was fine since we were on a tightish deadline to pick up our son.

Also, there were portions of our jaunt during which the air was permeated by a distinct smell of urine. We both smelled it and it didn’t seem to follow a pattern of any sort. Upland, lowland, it didn’t matter. But it was nasty. 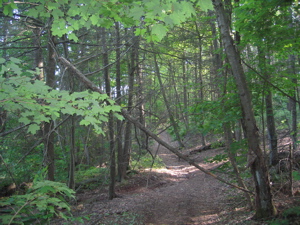 Along the way were some cool rock formations and some unidentified pretty woodland wildflowers as well. For a short spell, one could easily forget that a fairly busy road was only a short distance to the west and that this area would soon be the extended backyard of some more Yankee yuppies over-extending their credit. Sigh. Just as we were getting truly “lost” in the moment, the trail burst forth across an ugly swipe of a bulldozed swath. It immediately descended into more dark forest, but not for long.

Another turn south (this whole section travels generally SSW) and suddenly we were in the middle of huge cleared area – I can only assume this will soon be a road. Yup, this is the future Victoria Drive, as this hiker proves in her note about this section, which she hiked only two days prior to us:

Date Hiked: May 20, 2007
Conditions: For the most part all trails in good shape — no blowdowns or difficult sections to speak of. On the Metacomet trail, we lost the trail for about a mile between route 71 and Summit Wood Drive. (If you are in this section carefully look for blazes… the trail heads back into the woods… it does not follow the dirt road, though they both take you out to the same place. The purists in our group went back to pick up the section… while the rest of us had lunch.)

– from this CT hiking board

First of all, hats off to those “purists.” Secondly, they were hiking the opposite direction as we, but it was at this point that their group missed the turn left into the woods and instead stuck to the “dirt road” – ultimately ending up at the Summit Wood cul-de-sac. That’s unfortunate for them because as I wrote, they missed some interesting fauna and a unique part of the trail. Anyway, Hoang and I noted a rock across the “road” directing us to the right: 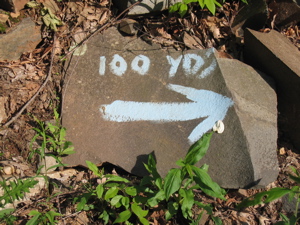 It was in this 100 yard section where we were able to, for the first time on the Metacomet, see a future goal: East Peak. And while I’ve never climbed it, I can assure you that when we do in the next section, it’ll be a much more interesting hike! 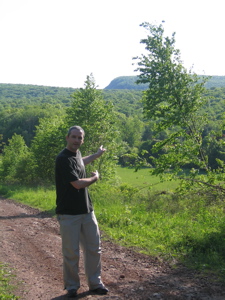 We will be on top of that in the next section

Strangely – and believe me, I’ve hiked many trails all over the country and this short little booger of a stretch was very strange – after the 100 yards in the open, someone decided to dip the hiker back into the woods on the other side of the “road” for about 50 yards, only to pop out into the cleared area again. I almost felt as if someone was messing with us at that point. I wanted to look back into the woods to see if there was something we were supposed to see. Yes, I care that much. 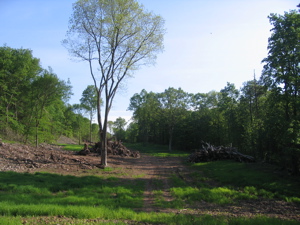 This is seriously the trail… for now.

The next third of a mile or so ambled along what has to be the widest trail corridor in the world. At least a football field across, the blazes continued along on the lone trees every 80 yards or so. It crossed over the cleared area (enough room for the future road and McMansions) and followed the forest edge, past an assuredly illegal hunting stand and then finally back into the woods again. 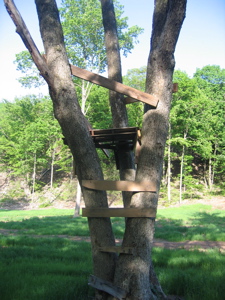 The worst hunting stand ever built

We could hear the Route 71 traffic as we contoured down the ridge along a scree pile that didn’t seem very natural but probably was. At one point we were tweaking our ankles (it reminded me of the AT in Northeastern Pennsylvania) along the loose rocks right alongside a nice, smooth, pine needle covered parallel ride about 6 feet away. Again, I swear someone WAS messing with us! 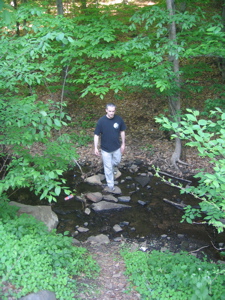 We crossed a little dry re-entrant, turned sharply west, descended about 50 feet, crossed a black-with-tannins-and-road-effluvia stream and reached our car along Route 71. Upon reflection, Hoang and I found this section puzzling (the random twists and turns, the distinct smell of urine), interesting (everything from exurbia, grass covered forest, good mix of deciduous and coniferous, exposed rock outcroppings, clearings, etc) , and disheartening (the puzzling and interesting aspects will be lost soon enough). We’re glad we saw it all before it’s gone to development.

Whatever happens, the section (and the two before this) will remain necessary in order to reach the next section through Meriden’s Hanging Hills area – which should be cool to hike and write about. 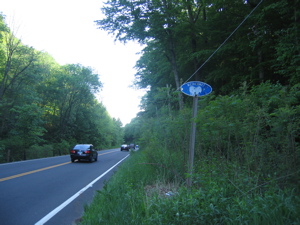 Continue on to Section 4: How’s it Hanging, Hills?