So Much For a Monastic Vow of Silence
Monk Parakeet invasion, Milford-Stratford-Fairfield
May 17, 2008

The town(s) removed the nests.

During the drive north from Stratford to Milford along a coastal byway in the middle of a full day’s trip to the area for some museums and random places that had no point, my friend Rob C and I noticed some giant masses of sticks up on power lines and in trees. 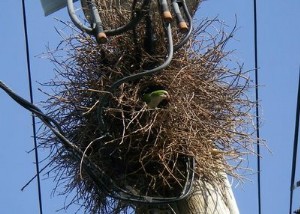 “Holy cow they have a serious squirrel situation down here,” we thought aloud. Little did we know…

It turns out, those MASSIVE nests are actually those of the rather out-of-place Monk Parakeets. We marveled at their sheer enormity, heard some of their obnoxious scrawlching and I made a note to figure out what this was all about. What I found fascinated me… and judging by the 9500 Google hits, I’m not alone.

A brief excerpt from one such article:

Monk parakeets have populated the state’s coastline and are believed to be the only species of parakeet able to live outdoors in the Northeast, according to Noble Proctor, professor of biology and internationally renowned ornithologist. Their local presence probably began with the opening of a crate of the birds at Kennedy Airport in New York during the late 1960s, Living says.

Proctor is credited with the first sighting in Connecticut in the mid-1970s at Lighthouse Point Park in East Haven. “It was really a stunner when they arrived,” Proctor recalls.

The birds are usually bright green with gray “hoods,” hence the name monk parakeet. In rare cases, the birds are blue or yellow. They possess notoriously loud speech patterns and gather in large numbers, which magnifies the volume. “They are up at dawn and you can often hear hundreds of the birds chattering at the same time,” Proctor says. “It’s penetrating.”

…Connecticut has the country’s fastest growth rate of the birds… their larger amount of body fat helps them cope with lower temperatures.

…”Their nests are very large, with one in Milford that’s the size of a Volkswagen,” Living says. The monk parakeets live inside their nests and often share the outer portion with other birds and even squirrels… 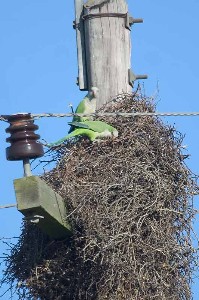 I imagine it is annoying to live next to these guys… and if they are destroying electrical infrastructure, well, then bye, bye birdie – in my opinion. It’s not as if Connecticut is home to native parakeets.