I’m not one for department stores or even shopping for that matter. In fact, as much as I love everything the Internet has to offer, I think online shopping might be my favorite aspect of it. No annoying salespeople asking me if I need help, no haggling, no waiting, no rude people around… 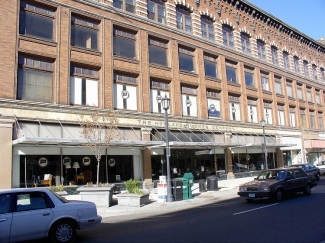 So I guess, in a way, I should be happy that the venerable Howland-Hughes Department store in Waterbury is no longer operating as it did for over 100 years – as an old-timey department store. But I’m not… Not at all. There’s a romance to the old department stores of yore. Who hasn’t watched “Mannequin” and marveled at crazy ol’ Hollywood’s window displays?

Note: I took Hoang to that “Mannequin” store in Philadelphia a few Decembers ago. Originally the original Wanamaker’s, one of the first department stores in the country, it’s now a Macy’s but still a cultural landmark. Among other things, the store still puts on a Christmas light show which attracts the young and old. Perhaps the biggest draw is the Wanamaker Grand Court Organ, which is the largest operational pipe organ in the world, reaching seven stories tall. It’s pretty awesome, even if the voice of the show changed from John Facenda to Juile Andrews – something which disappointed me greatly when I took Hoang to see the spectacle.) 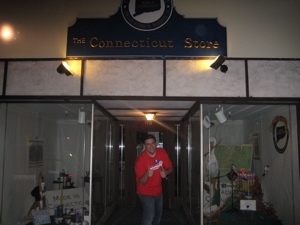 While hardly as grand as Wanamaker’s, Howland-Hughes had its charms. It opened in 1890 with $50 in the bank. The following contains excerpts from this 1990 New York Times article, before the store ceased being a department store:

The Christmas-shopping season is gathering steam at the Howland-Hughes department store, but no closed-circuit televisions blare the praises of the latest in jeans; no glittery, floor-to-ceiling displays of wrapped boxes crowd the floor, and no slinky saleswomen are positioned by the escalators to spritz shoppers with the season’s designer fragrance.

In fact, Howland-Hughes has no escalators. But it has Alma Symmons, one of the elevator operators at the store in Waterbury. She greets each customer with a sing-song “Floor, please?” Then she pulls back the lever to shut the door and delivers the customers to their floors.

Henry Paine, 40 years old, the store’s president and one of its owners, said he is aware that many shoppers who pack the malls may never have seen an elevator operator. But, to him, this is no reason to change things. The 100-year-old store, he said, lives by the motto “the new Howland-Hughes is the old Howland-Hughes. 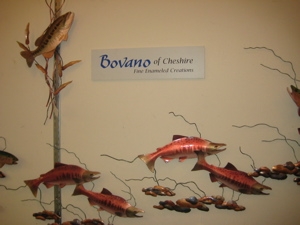 At Howland-Hughes, old-fashioned lighting fixtures hang from the walls, which are painted a lackluster pale green. The walls are lined with old wooden display cases. Paintings of vintage Waterbury scenes, including horse-drawn trolleys and carousels, hang on the first floor. The paintings had been gathering dust in storage until Mr. Paine recently brought them downstairs for display.

The store includes two restaurants, a beauty parlor and displays of clothing that ranges from $1 stockings to $450 leather coats. The prices are comparable to those at other department store’s. Customers can buy Boy Scout and Girl Scout uniforms and hand-knit items made by Waterbury’s elderly residents, who receive the profits.

But much of Howland-Hughes’s stock is the hard-to-find item that customers have come to rely on the store for. Many of these are found in the third-floor housewares department. Along with trendy items like automatic breadmakers and pasta machines, the department stocks things like hand-cranked food mills, flour sifters, cork-bottom caps for soda bottles and the pressure-cooker gasket that Mr. Paine recently shipped to a former customer now living in Vermont.

Howland-Hughes originally opened as a dry-goods store during a March snowstorm in 1890. The owners, Adam Reid and George Hughes, started with 12 clerks and $50 in cash. In those days, men’s shirts sold for 47 cents and infant dresses ranged from 25 cents to $4.50, according to an old newspaper advertisement.

A fire gutted the store in 1902, and it reopened a year later, this time as a full-service department store with 60 clerks. 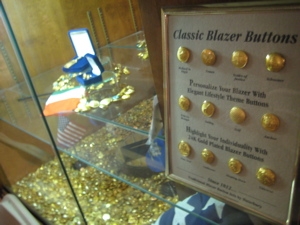 Whenever he can, Mr. Paine said, he hires retirees, like Tracy Breen, who ran his own department store in Naugatuck. Howland-Hughes’s hat and wig department is presided over by Hope Kukanskis, an elegantly dressed woman who is a retired nurse. She said she is especially concerned about helping fit chemotherapy patients with wigs to hide their hair loss, a problem she has experienced herself.

The staff’s loyalty cannot be duplicated, said Mr. Paine. He said that that Leonard Gerardi, the store’s longest-serving employee, with 47 years’ service, recently called from his hospital room “to say he thinks he’s sold a bedroom set.”

Among the store’s traditions is Church Day, the first Monday in November, when 10 percent of a sale is donated to the church of the customer’s choice. The store annually fills its display windows with students’ artwork, said Mr. Paine, who credits his father and grandfather for establishing the store’s philosophy.

Last March, when the store celebrated its 100th anniversary, was a perfect example, he said. 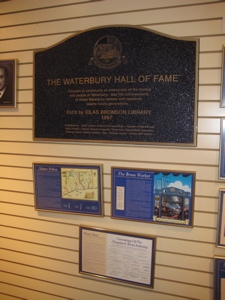 “If you’re a store, your 100th anniversary has to be the biggest opportunity to make money,” Mr. Paine said. “We didn’t do it on purpose. What Dad said last March is that, ‘O.K., for a whole week, we’ll give 10 percent off to the customer and an additional 10 percent off to the charity of your choice.’ That in a word tells you what Howland-Hughes is all about.”

And the customers say they love it. As Mr. Paine walks through the store, he is greeted by name. Customers often trail him, getting his assurance once again that he has no plans to close the store.

Anna Witkoski said she drives to shop and eat lunch at Howland-Hughes at least few times a month.

“I’ve been coming here 40 or 50 years,” she said. “It’s just a relaxed atmosphere. You can take your time and browse. And if you can’t find something anywhere else, you’ll find it here.” ‘Part of the Furniture’

Another customer, Nancy Joska, said: “I love it here, because it’s old fashioned. It’s like part of New England. It’s rustic, the employees are very courteous. I feel like I’ve become part of the furniture here.”

After reading all that, it’s no wonder I’m so sad about its ultimate demise (as a department store) about 10 years ago. However, the building remains and is available to other businesses at the moment. And, as mentioned, the ground floor is apparently a fine place for a politician’s victory party. 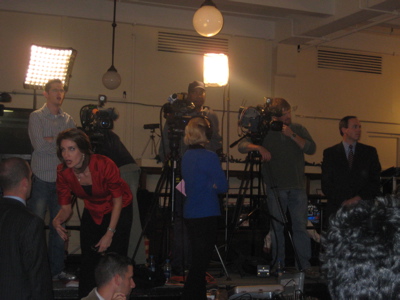 For that’s how I was able to visit the building; a friend had invited me to an election night victory party (for a state representative who didn’t even represent my district) with promises of free food and drink. The drink wasn’t free, but I did manage to look like a doofus on every single local newscast broadcasting from the party that night. And, far more importantly, I got to poke around the oldest free-standing department store in Connecticut!

One aspect that certainly got me excited was the small displays here and there from The Connecticut Store, which occupies the other half of the ground floor. The store was closed that night, but I’d surely be visiting it soon. A store that only sells items made in the Nutmeg state! (CTMQ’s awesome visit here.) There were small, randomly placed kiosks extolling Waterbury’s button industry. Did you know that when the Titanic set sail in 1912, Waterbury was proudly represented by the brass buttons on each uniform worn by Titanic staff? This same Waterbury manufacturer has provided the buttons for the world-famous ‘Green Jacket’ presented to the winner of The Masters golf tournament each spring. Waterbury Button, dating to 1812, is just one of the many merchants represented in The Connecticut Store. And, of course you’d like to read about my visit to the Waterbury Button Museum. 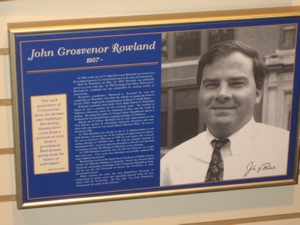 Yeah, stuff like that gets me excited – even more than free chicken piccata. As it turns out,The Connecticut Store is owned and operated by Hank Paine, the third generation of Paines who have owned the Howland-Hughes stores in their various incarnations. Hank, along with his father and grandfather (Ralph and Morris) were recognized in 2003 through their induction to the Waterbury Hall of Fame. 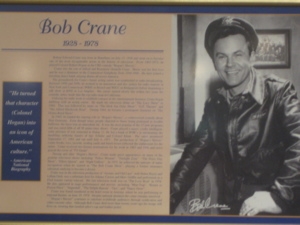 I don’t know why the Hall is on a wall in a building that I don’t think is very readily accessible and not the Silas Bronson Library – that would be Hall of Fame inductee Silas Bronson whose sole Waterbury claim to fame is endowing $200,000 to start the library – but I suppose it may be a space issue.

And speaking of dark tendencies, Connecticut politics has seen its share over the years. It’s not called Corrupticut for nothing. And if you were starting your own “Corrupt Connecticut” Hall of Fame, surely Waterbury native John Rowland would be one of your first inductees. 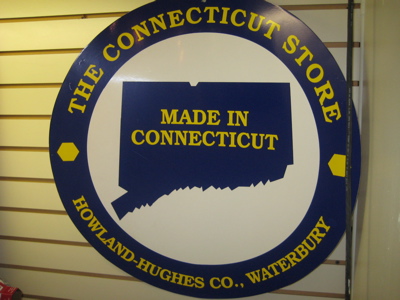 After getting busted for receiving free contractor work on his summer cottage in exchange for political gifts, Rowland was set to be impeached. On June 18, the Connecticut Supreme Court required Rowland to appear before the investigative panel seeking his testimony, which could have resulted in him giving evidence against impeachment in the ongoing criminal investigation. On June 21, Rowland’s lawyers announced that he would resign. The resignation went into effect at noon on July 1.

On December 23, 2004, Rowland pleaded guilty to depriving the public of honest service. Rowland was sentenced on March 18, 2005, in New Haven, Connecticut, to one year and one day in prison, four months house arrest, three years probation and community service. On April 1 he entered Federal Correctional Institution, Loretto, in Pennsylvania. His federal inmate number was 15623-014.

Awesome. Of course, this is Waterbury politics so In January 2008 his longtime friend and current Waterbury Mayor Michael Jarjura announced that he would hire Rowland as an economic development advisor for the city. Rowland began work in February of that year and is receiving an annual salary of $95,000 as the city’s economic development coordinator.

And there you have it kids, crime pays a near six figure salary.