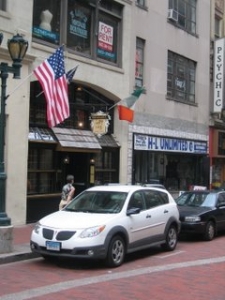 What a day I had in store on Thursday, 6/22! I had taken the day off the day the World Cup schedule was released, knowing the Ghana game would be huge. Oh, and also perhaps because I had gum surgery scheduled for 8 AM. Can’t forget about the gum surgery.

I awoke and put on my red, white and blue outfit (minus the red) and la-di-dah’d my way into the periodontist’s office. I just went to Google images to show y’all what the ol’ Code 4273 procedure looks like, but you don’t need to see that. I can assure you, though, the pain in my wallet was far worse than any pain in my mouth.

With that nonsense out of the way, I could go cheer on the USA! I went to the official home of US Soccer in Connecticut: Vaughn’s in downtown Hartford. An Irish pub owned by an Irishman (Johnny Vaughn) – but whatever works, right? It’s not like there’s a soccer bar in Hartford. Or Connecticut. Or the entire country for that matter.

I parked for free (broken meter!) right around the corner and secured the last seat at the bar. It was 9:25 AM. There’s hope for US Soccer yet! By kickoff time, the place was packed – and I mean PACKED. Sure, it’s a small place to begin with but still – this was a soccer game. At 10 AM on a workday. Hey, I was impressed. (Ironically, 10PM on a workday in downtown Hartford would be a harder draw. Ah, New England’s Rising Star, how we love you.) 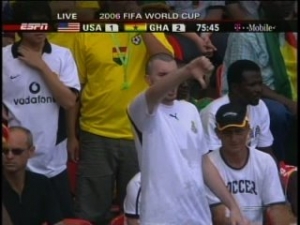 What’s more, the majority of the crowd appeared to have the day off like me as most were drinking. I’m not sure I’ve ever had a beer at that time of day before, but there’s a first for everything. And hey, I had just had gum surgery, so don’t judge me. The crowd was boisterous and fun – until some guy from Ghana scored an easy goal off of a Claudio Reyna screwup. Sigh.

Right around that time Italy scored in their game which meant we still had hope. Even though we had yet to score a goal ourselves in the entire World Cup, we still had hope. This was Ghana after all. I mean, where the heck is Ghana? Sheesh.

And just like that, the boys scored a beaut of a goal and it was tied 1-1! Renewed hope! The crowd chanted and sang and ordered more morning brew (and I don’t mean coffee) and my gum stopped hurting and I hugged some random dude. (The same dude wouldn’t stop yelling, “Here we go, NOW!” the rest of the game and I hated myself for showing him love.) 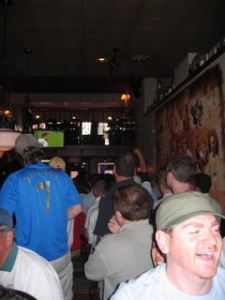 Just as the rousing display died down a bit, the referee showed us once again that the world hates the US by calling a phantom penalty in the box. Penalty kick! These silly displays are mere formalities at this level and yup, 2-1 Ghana. Refs suck in every sport the world over.

As you all know, the second half finished scoreless and the US lost; Ghana advanced. My man Excitable Mike showed up at halftime to join in the misery. I was remiss in my previous Italy-US report as I failed to mention his 1st half presence there. Apparently Excitable Mike can’t watch full games or something. But what he can do is describe his plans for a trolley/tram system in Hartford. It only took him 2 minutes to chat up some random lady next to us about his plan. Hey, it’s a great plan and I fully back him. I just may not be as passionate about it. And Mike, the Whale will return – have faith!

Anyway, I was totally bummed out after the loss. The afternoon slate involved Brazil vs. Japan and the Aussies vs. the Croats. I know I’ll catch Brazil later on with Ed so I staked out a few sushi joints that I knew had a TV. No luck, as they weren’t open yet or were empty at 3 PM. The Outback Steakhouse didn’t open until 4. Lame.

But I had new gum skin! And by the way, where the heck was Ed?! 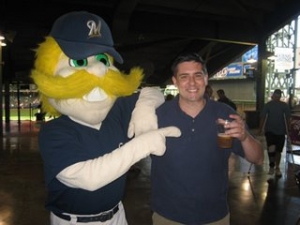 Ed was out in Milwaukee (Algonquin for, “The good land”) on business keeping it real with Bernie Brewer 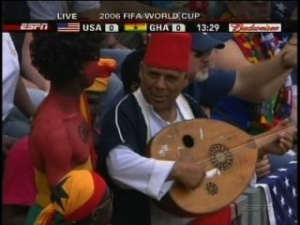 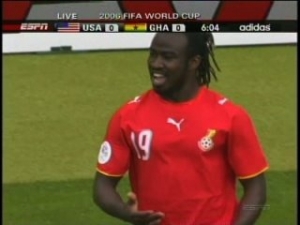 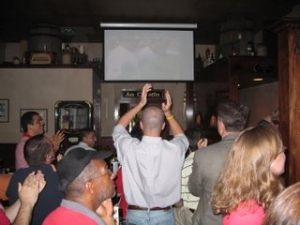 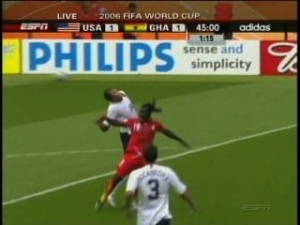 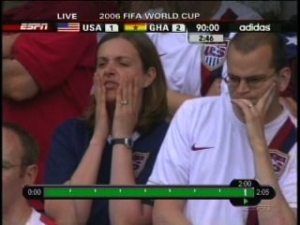 And the Americans are sad. (Hey mom, I’m on TV! And I look like this!) 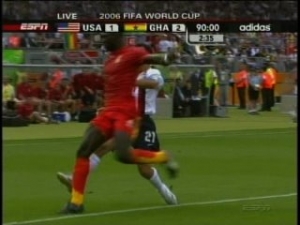 Yet another phantom soccer foul 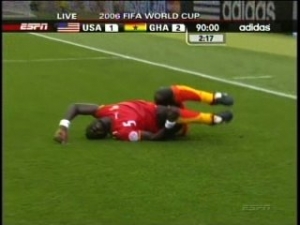 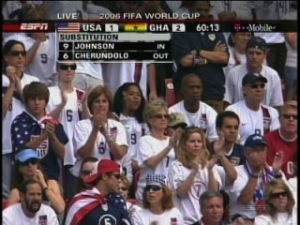 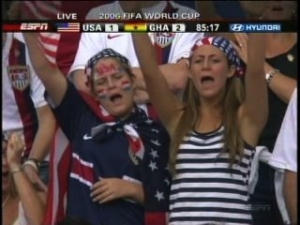 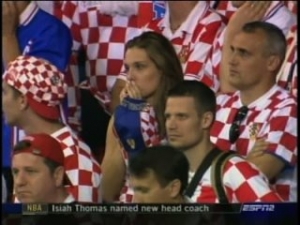 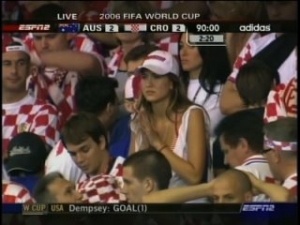 Wait… go back to that first Croation woman… 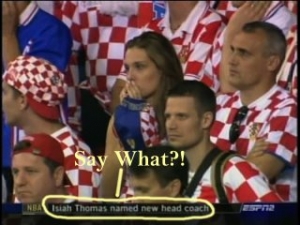 I may be a Sixers fan, but at least I’m not a Knicks fan. Good lord.

Next Up: Watching England win in an Irish Bar