Squashing!
A Day with the Trinity Squash Men’s Team
Hartford 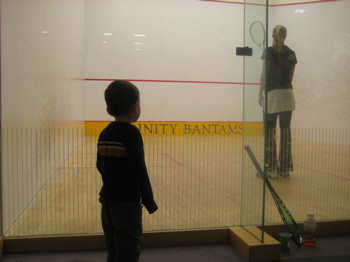 Simply put, squash is the worst name for a sport. Worse than ping-pong, worse than cricket and worse than cock-fighting. A squash is a vegetable. To squash something is to smoosh it. Why in the world it’s also the name of a fast-paced enclosed racket sport is beyond me. So let’s do what I do here on CTMQ and learn us something new:

“The game was formerly called squash racquets, a reference to the “squashable” soft ball used in the game (compared with the fatter ball used in its parent game racquets.”

Thanks Wikipedia. I guess I’ll have to trust you on this one. The Wiki page on squash is quite informative, and if you’re the least bit interested in learning about a sport you’ve never seen nor played, here you are. (I’m not going to bother with any of that other than to say it’s like raquetball. I choose not to learn the difference.)

Of course, if you live in the Hartford area and watch the news or read the paper at least sporadically, you have some inkling of 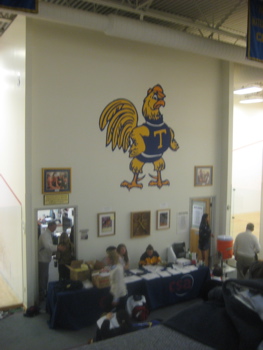 what squash is. Insofar as it’s played at an exceedingly high level at Trinity College over in Hartford’s recovering Frog Hollow neighborhood. In fact, for all the publicity the UConn women’s basketball team got for their 89 game winning streak and boat loads of nationals championships, the Trinity squash team laughs at that.

The Bantams’ level of collegiate squash dominance is so ridiculous, so absurd, that there really is nothing to compare it to other than perhaps the Globetrotters over the Washington Generals. You ready for this? Over the last dozen years, Trinity has not lost a single match to another school. At 244 matches and counting, as of this writing, it’s the longest winning streak, by far, in the history of college sports. In the HISTORY of college sports.

I was about to say something about the fact that only tony East Coast private colleges and Universities deign to field a squash team does not diminish the school’s accomplishments. 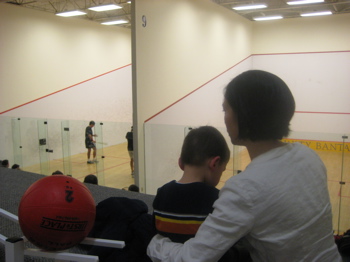 Okay, maybe it actually does a little bit. I mean, squash? Really? There are over sixty teams with the ACC, the Pac 10, the Ivy League, the Big 10 all represented. Trinity’s success is well known even in India and Pakistan, where the world’s best players reside. Trinity’s streak is talked about and compared to the greatest streak in professional sports which, to no one’s surprise, is also held in squash as in individual victories by one Pakistani pro squash player, Jahangir Khan. Khan set the individual record of 555 consecutive wins from 1981 to 1986. (This information was gleaned from some random ten year old article here.)

It was free and free-wheeling. We had absolutely no idea what was going on, and the air, thick with Ben-Gay and Icy-Hot, muddled our senses to the point of not really caring. After all, we were witnessing history in the making; everyone who watches Trinity play (and win) another match is witnessing history. A march to a level of domination that most likely won’t ever be seen again. 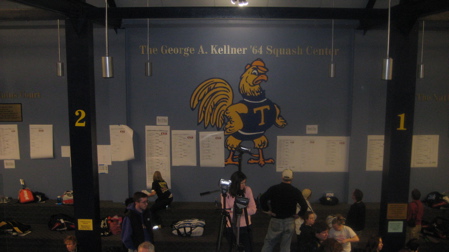 The squash courts are a sight to behold. The layout fascinated me, with a sort of Andean pyramid set in the middle of 6 courts all around. Spectators could climb the stepped pyramid and situation themselves to watch whichever match they wished to watch. But that wasn’t all – a corridor led to another set of courts with a grandstand and fancy electronic scoreboards and everything. We were in Squash Nirvana.

You probably have a couple questions. Like, “why haven’t I ever played squash and why don’t I know anything about it?” Well, 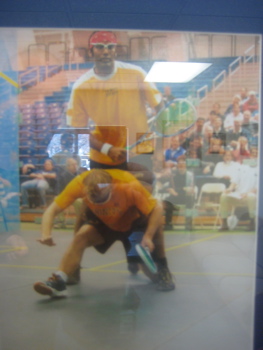 probably because you’re an American of relatively modest means. Americans suck at squash with one caveat: The super rich prep school kids, especially those from the Brunswick School in Greenwich, seem to be excelling at the sport these days.

Next question: “Okay, so why is Trinity, of all places, the center of the collegiate level squash universe?” Ahhh, good question. After all, the team has been showcased in Sports Illustrated, The New York Times, USA Today, and on ESPN. In addition, the squash program also boasts several ISA Dual Season titles, CSA singles and doubles titles, and consolation tournament titles. The team has had 65 All-American selections in the past 13 seasons, including 47 first-team honorees. On and on the accolades go…

Fortunately for me (and you), the New York Times has just published an excellent story on the team. (If you don’t like to read, here’s a video of an ESPN story about the team after their 11th national championship.) So instead of me trying to rewrite a much-better-written story, here are some choice excerpts:

On the genesis of the dominance: 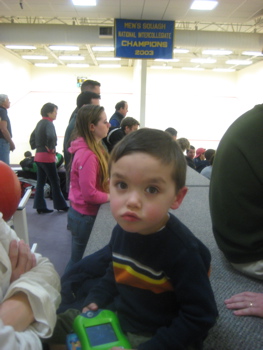 The obstacle there was that Trinity is a Division III school, and in Dobelle’s view, winning a basketball championship, say, against an obscure college in the Midwest wouldn’t make much of a splash. Trinity had a squash team, however, and even if the sport wasn’t played everywhere, at least the school competed against Harvard, Yale and Princeton, elite universities known throughout the world. Beating them in anything would be big news. It was still easier said than done, though: no school outside the Ivy League had won the Potter Cup, given to the men’s national champion in college squash, since the U.S. Naval Academy’s surprise victory in 1967.

Dobelle asked his squash coach, Paul Assaiante, what it would take to compete with the Ivies.

Recruit foreign players, he said, without skipping a beat.

Trinity started only one American, Travis Judson, a senior, in its nine-man lineup. Sharma was from Jaipur, India — he attended a squash academy in Chennai before Trinity — and behind him was a fellow countryman as well as players from Sweden, South Africa, Malaysia, Colombia, El Salvador and Jamaica. 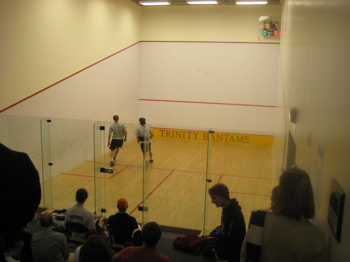 What Assaiante understood in 1996 and what remains the case is that the United States isn’t very good at squash. (The highest-ranked male American pro is No. 40: Julian Illingworth, a Yale graduate.) In part, that’s because until the last 15 years or so, Americans played a different version of the game, one that employed a harder ball and smaller court. Also, in many other parts of the world, more people are able to play; squash isn’t an upper-class sport. “I grew up in a middle-class, maybe working-class, family,” says Martin Heath, the Scottish coach at the University of Rochester, who was once ranked No. 4 in the world. “In Europe, you didn’t need to belong to a country club to play the game.”

On criticism from the other “better” schools:

Other schools have had international recruits, but never in such numbers, and there have been chirps about Trinity’s mercenary approach inside genteel squash circles. In 2004, The Harvard Crimson wrote — erroneously — that the “Evil Empire of College Squash” was handing out athletic scholarships, something schools in the Ivy League and the New England Small College Athletic Conference (which Trinity belongs to) are not allowed to do. “The feeling was that if you beat Harvard, you had to be cheating,” Assaiante says.

Trinity does enjoy one significant recruiting advantage: lower admission standards. “The kids that play squash for Trinity could not get into Williams (and Harvard, Yale and Princeton),” Zafi Levy, Williams’s coach, told me by e-mail. (Levy, who is from Israel, played for Assaiante at Trinity and then transferred to Williams.) In some cases, that’s certainly true: Randy Lim, a senior from 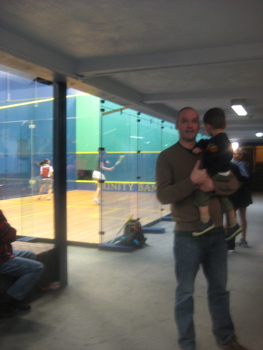 Malaysia, didn’t get into Princeton, for example. What’s more, Trinity’s admissions office, with support from the president, is able to give more slots to squash players than its competitors do. As the Yale coach David Talbott puts it, “At Yale, where sports aren’t the emphasis, the president isn’t going to put that much focus on any sport.”

Now would be a good time to note that Yale’s hockey team is number one in the country and no WAY are all those guys up to Yale’s academic snuff. (CTMQ Attends a Yale hockey game.)

I do encourage you to read the full article, as it’s pretty interesting. It does mention the infamous Trinity guy intimidating his opponent last year. The video – here it is, and it IS pretty hilarious – went viral and was played on all the national sports shows. Anyway, props to the NYT for being the only time I’ve ever read the truth of the situation: that the smaller guy from Yale had been barking at the taller Bantam all match long. (here’s evidence of that.

As Hoang and I watched some squash, I was struck by how fast the game is. I can’t tell what’s in and what’s out and it’s amazing guy’s don’t get their heads lopped off more often. I was also amazed at how leggy the women squashers are. Damian and I found ourselves watching some 5’11” match with some girl from Brown that should be a model, not an Ivy League squash player in Rhode Island. And there were more of her type scattered about.

I’ll end there, realizing that’s probably the only thing that’s going to get 90% of those who have read this far to go to a match.