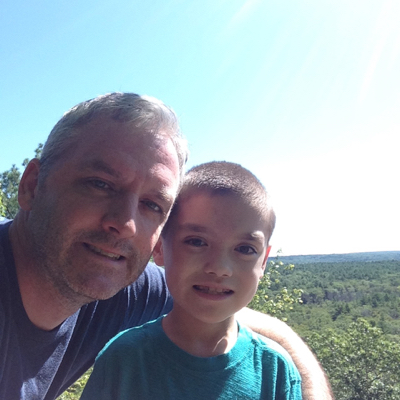 I often say that I can do CTMQ because I am centrally located in West Hartford, and nowhere in Connecticut is too far away. And it’s true, but there are some towns that are simply a pain in the butt for me to drive to. Wilton, Sherman, Sterling, and Voluntown spring to mind. And even so, I can get to all of them in under 90 minutes. In fact, I can get to Voluntown in just under an hour, so it’s not that bad at all.

By the way, that drive down 138 off of I-395? What’s up with that? Why all the dilapidated package stores and closed down gas stations? Sure, Hartford and Bridgeport and New Britain and Waterbury and Bristol all get dumped on for vacant buildings and stuff, but it’s time to put Voluntown into that conversation. 138 near I-395 is not the prettiest of drives.

But all of that is quickly forgotten when one turns onto the smaller roads in the Pachaug State Forest. It is stunningly beautiful in some areas. Almost primeval in some ways, with massive stands of (not-dead-yet) hemlock, red pine, and white pine. I love it down there. 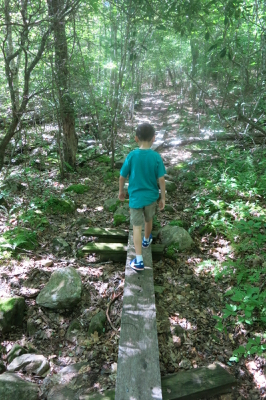 And on this beautiful day, I loved it even more. While Mount Misery is on the Nehantic/Pachaug Trail, I’d never been up it before. It’s cool that the TSTL challenge got me to a few new-to-me places.

I parked near the Rhododendron Sanctuary path – which is a short little walk every CTMQ reader must do in June at some point. It’s even wheelchair accessible.

After the usual nonsense from Damian about not wanting to hike and a few Smith-Magenis Syndrome yelps and anger, we hit the trail.

“Damian, dude, listen. This is it! This is our 14th TSTL hike! You qualify for the hiking staff after this!”

For some reason, he didn’t seem to care. Away we went.

The hike to the summit was 1.2 miles and actually contains a false peak along the way (from the north). Of course, it’s not like a false peak in the Rockies or whatever, but you do, in fact, have to climb a hill that you may think is Mount Misery when, in fact, it is not.

The funny part about this is that once we were atop this unnamed hill, with its non-existent overlook, Damian said, “This is not it. Keep going.”

I had forgotten our maps, so I was actually a bit in the dark with regard to how much farther we had to go. But Damian was in his “go” mode, and there’s no stopping him at that point.

Down the hill and then up what would turn out to be Mount Misery. It wasn’t difficult at all, but I had to keep prodding Damian to keep going as we neared the top. Those who know Damian and/or his syndrome, have sort of joked to me about the name of the mountain. Did I save it for last purposely?

After all, hiking with Damian can result in much misery at times. I could write a long post on what it’s like, but I captured a bit on video. And so, what’s it like to hike with an SMS kid? It’s like this:

I think you can understand all that he’s saying in it, except maybe that guttural yell near the top. That was, “Put the camera away!”

Please know that a hike with him isn’t a constant battle. In fact, when I’m ahead of him, he just sort of keeps going quietly behind me. But when the hike’s profile steepens, or edges near a cliff, I like to get a bit closer to him for obvious reasons. And that sort of gets him going a bit… but yeah, every mountain can become Mount Misery with him at times.

Sorry about the spot on the camera on that video and all the pictures… I didn’t notice it until we were done.

Oh – Mt. Misery is so-called because it was deemed too rocky to farm back in the day. Just like the Hell Hollow stuff, also in Voluntown. More here. 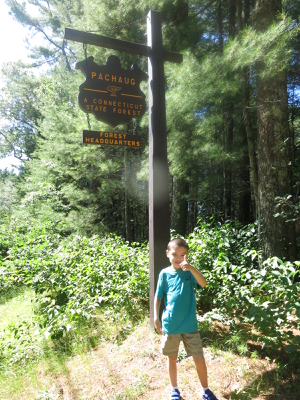 So that’s it! As Damian said, “We did it.” Indeed we did… When I decided to try to get to all 14 spots with my special needs son, I never once thought it wouldn’t be possible. I knew he could – and would – do it. There were some difficulties along the way, sure, but all-in-all, it was never too bad.

I can tell you that for the entire 1.2 mile return hike, I was beaming ear to ear. At one point, we passed some elderly hikers coming towards us. I couldn’t contain myself and told them, “We did it! We just finished all 14 TSTL points! And that’s Damian. He may say something unique to you.”

One lady called him “Mr. Hiker Man,” and he smiled at her as he gingerly picked his way down over some roots.

The thought of someone bestowing that moniker on my son would have been ridiculous to me for Damian’s first eight years. Now, in his ninth, it’s very real… and very beautiful. There was no prouder dad in Connecticut on this day. Really and truly… the kid did do it, and he deserves all the love in the world. 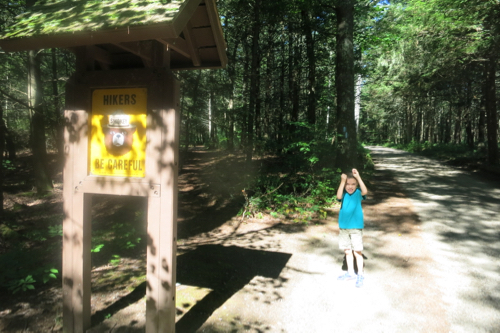 A few good punches to the head before we get going. Tradition! 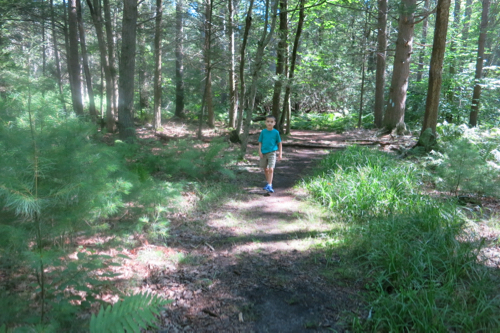 Flat beginning, among the baby pines 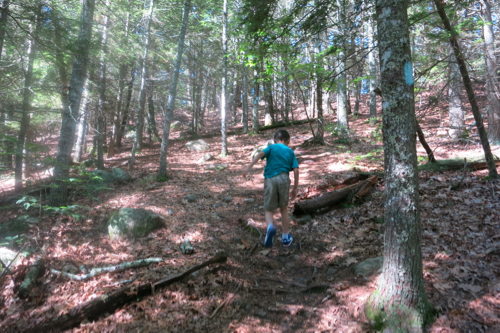 Up the fake peak 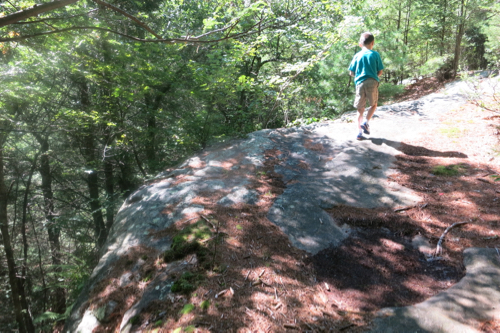 The false summit, such as it is 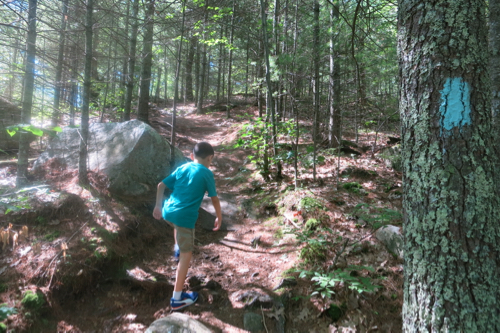 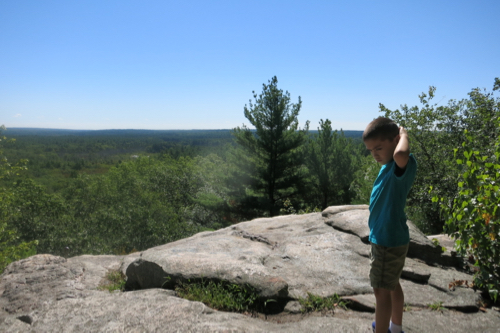 The summit! Our 14th TSTL, complete! 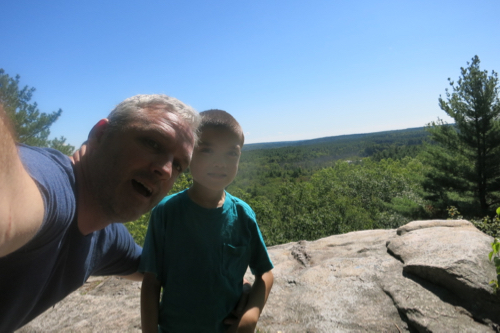 Like I said, sorry about that smudge on the camera 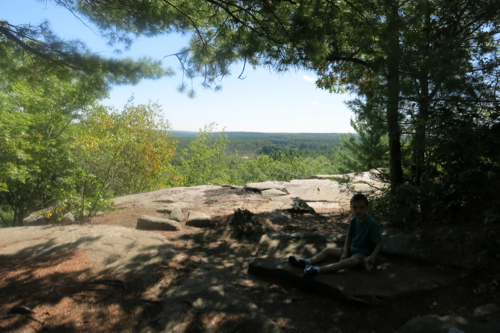 Some nice shade to enjoy a juicebox in 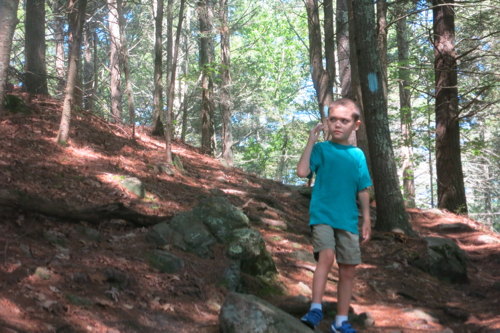 Back down the hill for “Mr. Hiker Man” 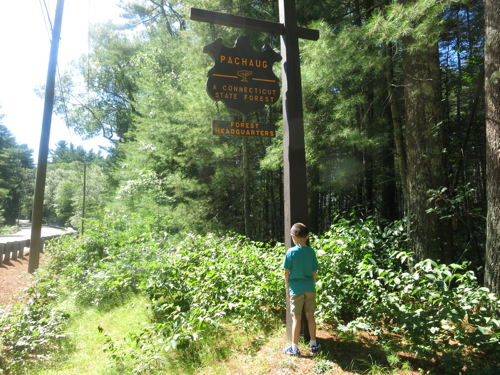 He’s my son and I love him.

Some really nice pictures and descriptions of the area from Yawgoog