I suppose I could look this up, but who wants to do that? I’d guess that Sleeping Giant is the third most visited state park in the state. Obviously Hammonassett and Rocky Neck get the most visitors from late May to early September, but after that, it very well may be Sleeping Giant. After all, I took the boys there on a weekday in June and we crossed paths with about 70 other people. Although I’ve been to the park a dozen or more times, I’ve always avoided weekends in October. I imagine it’s a bit ridiculous. 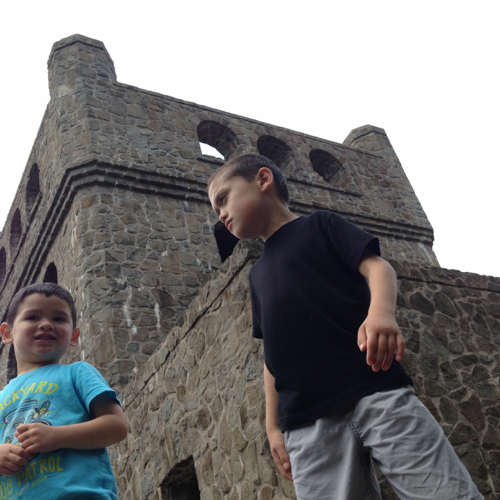 Not that I want to discourage hikers to visit… it’s just that super crowded hikes aren’t really MY thing. (And with my sons, it’s REALLY not my thing.)

There are many pages on Sleeping Giant around this website. The venerable Quinnipiac Trail traverses the entire park along the main ridge, and I’ve completed the “Giant Master” hiking challenge. And, of course, there’s the oft-visited stone tower at the top of the Giant.

But here I was again, with two little boys in tow. It was kind of fitting to tackle the Giant as our 7th TSTL challenge point. This is the longest hike of the 14 summits, at 3.2 miles – although there are infinite permutations to make longer and more challenging days if you wish. The most difficult – and interesting – option would be the blue (Quinnipiac) trail from the west. It’s no joke, trust me. None of that near-vertical scrambling for us on this day. We took the popular Tower Trail; a wide, graded, gravel path from the main parking lot up to the tower. It’s never steep and its impossible to get lost. (Although, for whatever reason, finding it from the main lot is often problematic for many people.)

The boys whined a good deal at the beginning, but that’s to be expected. Damian did his Damian nonsense now and again – yelling, hitting himself, “quitting,” but it wasn’t too bad. Calvin’s little 4-year-old legs did the best they could, but let’s be honest, 1.6 miles of “up,” would give any little kid reason to complain.

Two-thirds of the way up, there’s a nice little picnic area that was infested by gypsy moth caterpillars. Instead of being grossed out or fearful of the damage they can cause, Calvin was ecstatic to see some “cool” caterpillars up close. (Damian already had his fill at the previous TSTL hike down at Hurd State Park in East Hampton.)

After the fifth short rest, we made the final push to the top. And as usual, just as Calvin started saying he was all done, the tower came into view and all was well. The boys loved climbing this one and actually seemed to not only appreciate the view, but also their effort. Damian has never really seemed “capable” to feel pride in a job well done, but I felt that he did once atop the Sleeping Giant tower. He took some time to enjoy the view of the Sound and New Haven.

The hike back down was pretty smooth and easy – especially with the promise of ice cream as a reward. Works every time. 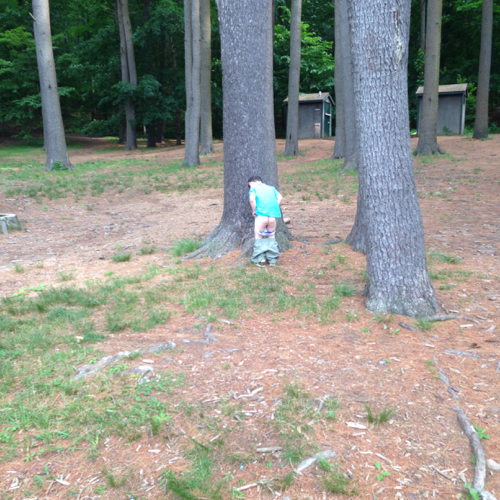 This is now tradition. 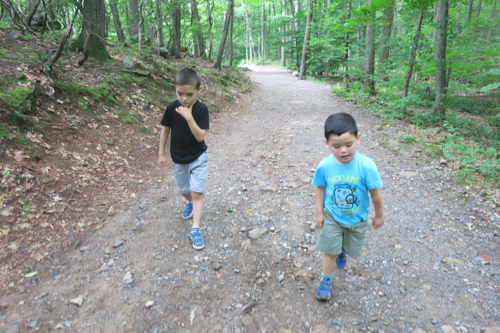 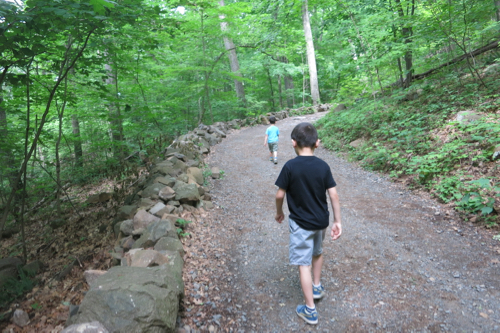 … Some faster than others… 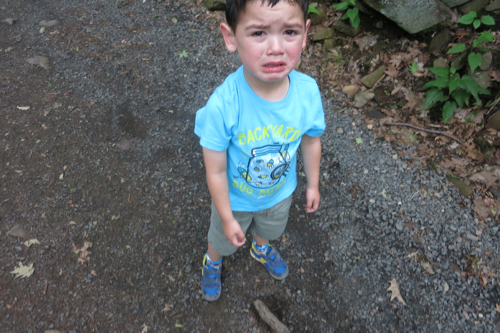 … Until they trip and fall on pretty much the ONLY root (at his feet) on the entire trail. 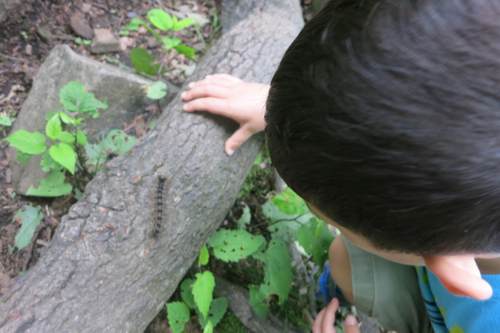 This Very Hungry Caterpillar made it all better though. 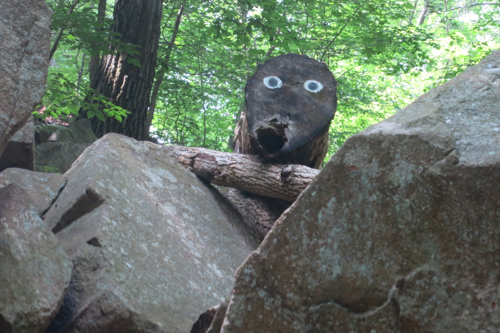 Keep a look out for this guy – he scared Calvin. Like, for real. 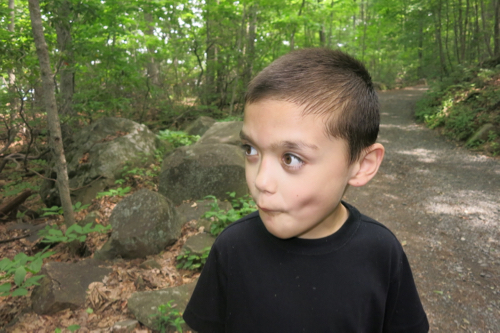 But not Damian, who mimicked the face. 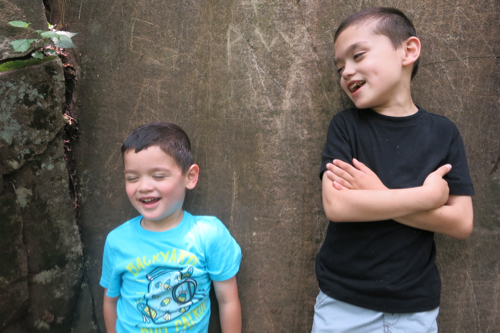 I forget what was so funny, but this is why we hike. 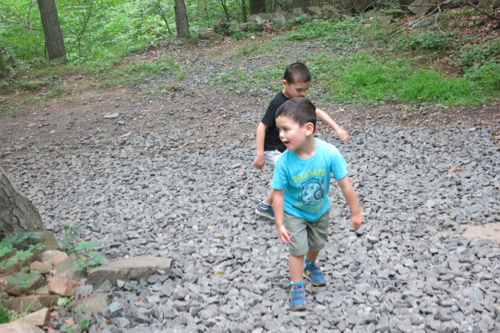 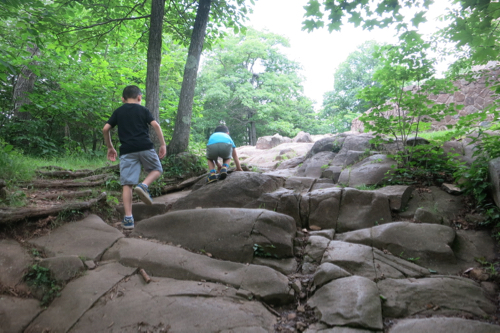 The tower is in sight! 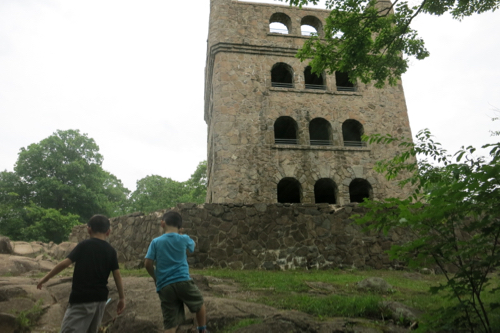 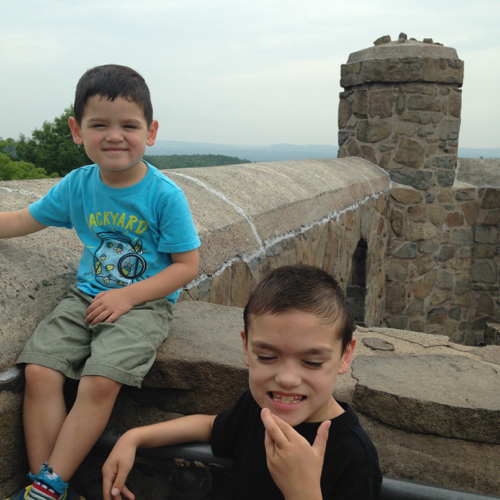 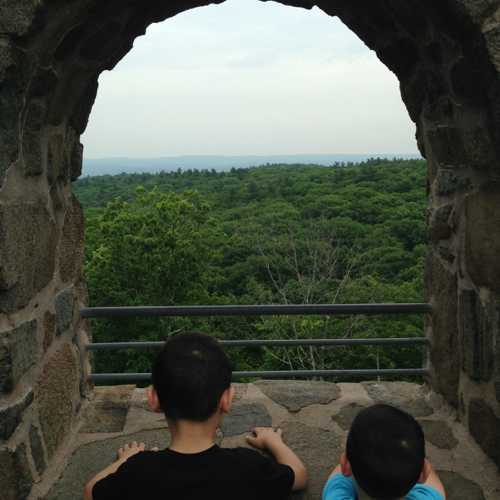 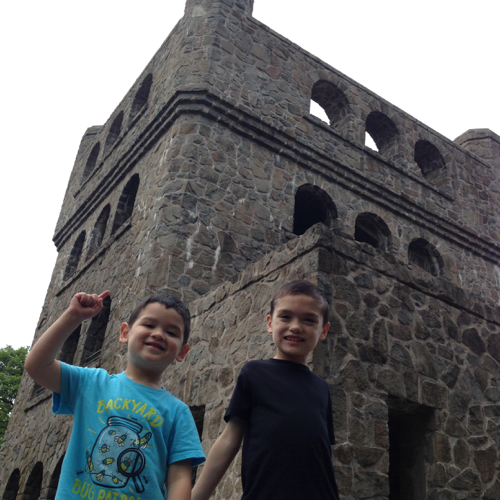 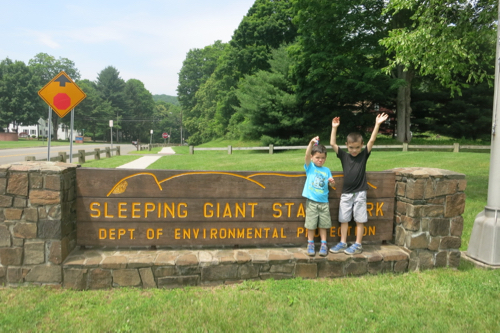 Annnnd, half of the 14 TSTL peaks have been conquered.