Poetry is not my thing. In fact, I’ve been known to unfairly smear the whole genre with the broad insulting stroke of, “I hate poetry.” This, of course, isn’t really true at all. I’m more ignorant of poetry then disdainful of it. So I’m open to learning something about it, by way of a cool new little walk in northwest Hartford, following the daily path of one Wallace Stevens.

Wallace Stevens… Whom I’d never heard of (see? Totally ignorant.) before finding something online regarding this walk. As I continued searching, I was deluged with an abundance of Wallace Stevens information. Wow, this guy was a really well-respected poet – and person it turns out. And he lived a mere 3.8 miles from my house… as a crow flies. 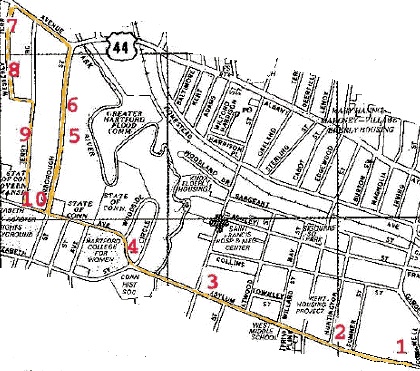 Old-school map of the Walk

A crow… Or a black bird of some sort. Ah, segues… my forte For you see, the Wallace Stevens Walk has been accentuated with handsome granite blocks etched with Stevens’ most popular poem, “Thirteen ways of looking at a Blackbird.” Each of the thirteen stanzas have been etched on separate blocks beginning near downtown at The Hartford building and ending at his relatively modest house on Westerly Terrace – 2.4 miles in all.

Every morning Wallace Stevens walked two miles from his home at 118 Westerly Terrace to his office at 690 Asylum Avenue. In the evening he walked back. He occupied himself on this pedestrian commute by composing poetry in his head. Even on weekends Stevens, who never learned to drive, enjoyed long walks in the city. We hope you will enjoy following the poet’s walk.

Okay, whatever they say.

And you know what? I kind of like the poem – and I really like not only the walk, but the idea of it as well. The only negative about it is that Google hasn’t converted all of Asylum Avenue to Streetview yet. (But you have CTMQView.) Which is pretty strange, seeing as though Asylum is one of Hartford’s most important thoroughfares.

It’s funny, Hoang drives this Walk every day to go to work and never knew it existed. And I’m sure she’ll never read this and continue to drive on in ignorance of the Wallace Stevens Walk. I don’t know how she sleeps at night.

Let’s get to it already