Not too many people get excited for gray and chilly late December jaunts in central Connecticut, but I do. Perhaps because I hadn’t been hiking in Connecticut in forever. What the heck happened?! Oh yeah, I got fat. No, that’s not it. No… Hoang got fat… No – well, yeah, actually she did because she’s pregnant and I’ve been busy basically re-doing our entire house layout. 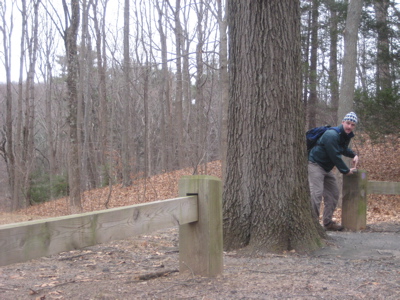 So, with a half-day of work before Christmas and an IKEA shopping list (for said newly formatted house), I snuck in a couple hours at Sleeping giant on the way to the store. I didn’t even have time to formulate a real plan of attack on the network of trails, but I figured I’d sort it out when necessary – and I did. 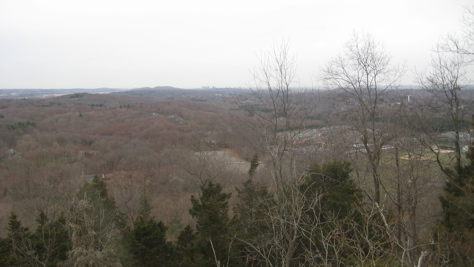 I never really studied the park’s trails before this visit but once I decided on where I’d park, the layout started to make sense to me. Since I was a little curious about the old Quinnipiac Trail’s entry from the east into Sleeping Giant state park, I decided to start my day over there, at the Chestnut Lane parking area. I’d say there’s room for a hundred cars here, all along the road if necessary. There are several of these roadside parking spots all around the Giant if you want to avoid the crowds at the main entrance. 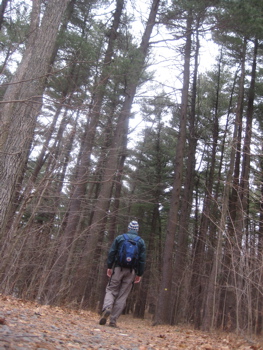 It started to snow fairly heavily on my drive down to the hike. It stopped shortly after I got going though and the temps stayed right around 30 or so, so that was never an issue. 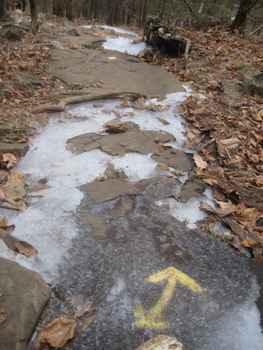 In order to fulfill the CFPA’s CT400/Blue Trails challenge, I’ll have to hike all the trails so-designated in the CFPA Walk Book. Imagine my excitement in learning that by doing so I’d also become a “Giant Master” according to the Sleeping Giant Park Association! So I will most certainly be taking these hikes very seriously and not dare skip a step. After all, how can one call oneself a Giant Master if he is nothing more than a Piddling Cheater?

(I should note that the Giant Master program has a requirement that you join the Sleeping Giant Park Association at a mere 10 bucks per year. But it’s not like those 10 bucks aren’t going to a great organization.) 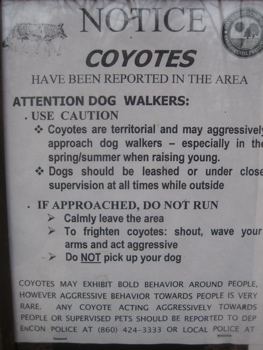 Like most visitors, I’d only previously been up the Tower Trail and maybe dabbled a bit here and there around the main park entrance. But now, in my wiser and older years, I am eager to check out the lesser-known and lesser-hiked trails around the park. From the Chestnut Lane trailhead, I had my choice of five(!) trails. I settled on yellow for no real reason at all. Four of the five trails all pretty much end at the same spot below the giant’s head at the main park entrance anyway.

I must remark how well the trails here are marked. There was also a plentiful supply of trail maps at the trailhead and the sign wasn’t defaced. This is what your 10 bucks is helping with folks. Also, the blazes throughout the park don’t suffer from SPOBS, or, State Park Over Blazing Syndrome as I’ve so often encountered elsewhere around the state. 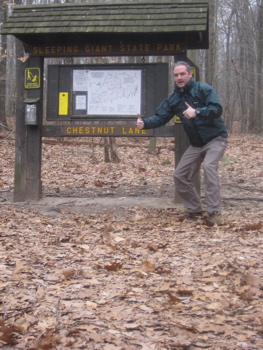 The yellow trail is a mostly easy east-west trek across the south side of the park, mostly below the giant’s prone body. In December, the only greenery I saw was the occasional laurel grove and a few white pines here and there. The trail follows the contour down and around the giant’s right foot, right knee and right leg, which really should be named right thigh to lessen confusion. 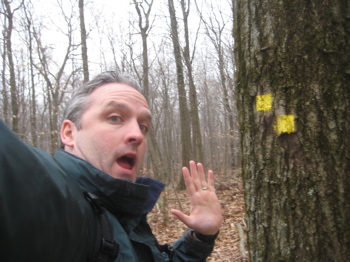 Here, beneath the thigh portion of his leg, I saw my first ice-covered cliffs. The trap rock cleaves are very evident here (as they are all up and down this ridge up into Massachusetts) with the squared-off cubic chunks in evidence down the slope. The yellow trail (and all the other east-west trails) crosses the five red trails that all head north-south. These trails really don’t look all that pleasant, as a few of them appeared to me to be nothing more than runoff reentrants up the various small valleys of the giant and down the other side. 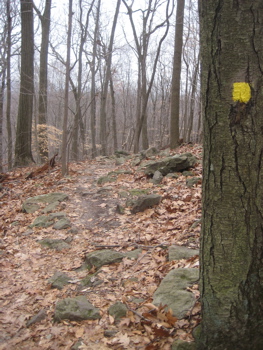 There are a couple of very nice viewpoints along the yellow trail that take in Quinnipiac University just below as well New Haven and its harbor beyond. I have a friend who has taught at QU who has mentioned how pretty the campus is in the fall with the giant looming up just beyond; I never paid her much mind until now. I imagine it is probably stunning for a couple weeks every October. 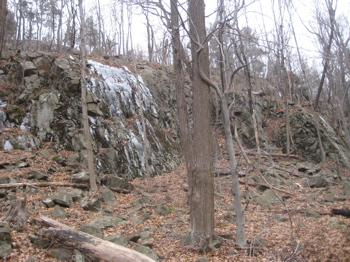 After the viewpoints, which I’m sure are better on the trails up on the ridge, the yellow trail descends fairly steeply to the park’s main entrance. Due to what surely must have been pretty atrocious erosion, the great volunteers of the Association have built a couple of very well-made staircases in the middle of the woods. One of them had a sort of mesh wire stapled onto it which provided much-needed traction on the slightly icy steps for me. 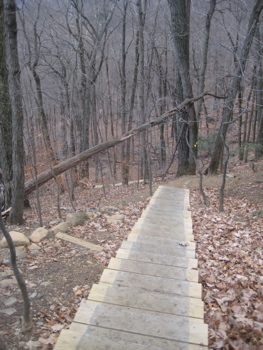 I’m not sure I’ve seen more solid stairs of this sort built on a trail in the woods before; and that includes the whole Appalachian Trail. I found the rise over run ratio of the lower set quite pleasingly small. That is, each step up was only maybe 5 inches, lessening the effort for those climbing up. 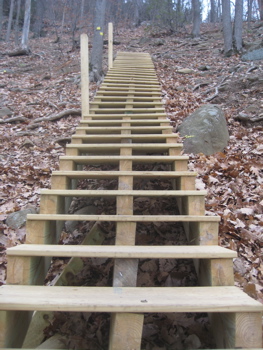 Aside from a few sketchy ice-covered rockfaces, I made it quickly down to the level ground of the hemlock grove at the park’s entrance. I didn’t realize I was hking almost half of the nature trail by default here, as it shares the path with the yellow. 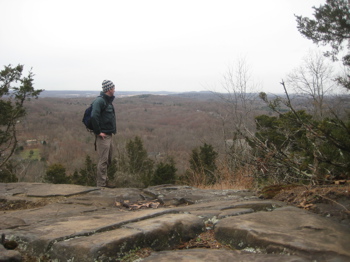 The trail walks past two outhouses, always a rarity on these hikes and ends near a pump well at the entrance road and parking lot. Strangely, there were a bunch of cars in the lot (maybe 20) but I didn’t see another soul in the woods all day other than a couple guys being weird in the quarry later. I sat down for a minute or two to decide via which trail I’d hike to return to my car. I knew I wanted to be done at 3:30 in order to complete my errands and be home at the proper time so I chose the longest route, as I had enough time to do it at a fairly leisurely pace. 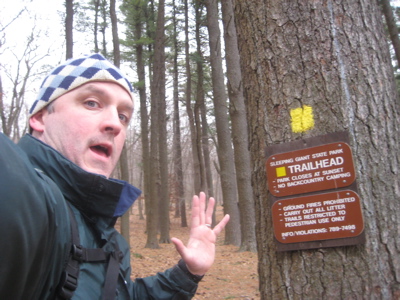 Yeah okay, so 3.2 miles isn’t exactly long. But it’s the longest available (not including the Quinnipiac Trail, which I consider a sort of separate thing anyway). 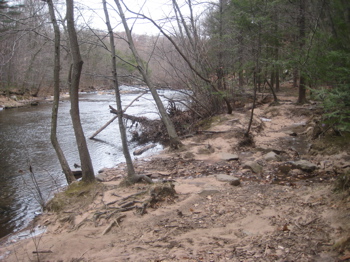 Within 5 minutes of the violet, I decided I loved it. Since I knew nothing of what to expect along the way, the first half mile was full of surprises for me. Too bad that won’t be the case for you if you’re reading this and plan to go hike it. It’ll still be cool, it just won’t be a surprise, okay? 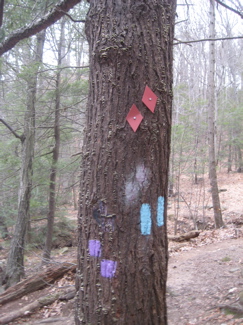 I found the trail’s beginning next to a port-o-let at the southwest corner of the picnic grove. Down some steps and then alongside a fairly large, ice-lined creek. I shared the trail with the Quinnipiac and the red diamond trail here for a bit, which mucked up a couple trees but not too badly. 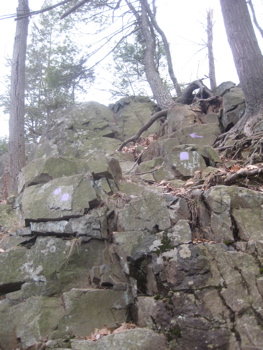 In short order, the Quinnipiac heads off to the east, heading more or less straight up the giant’s head. Saving that for another day, my violet trail wound its way serenely along the pleasant river over some soft sand and – y’know, this thing is underwater probably 30 days out of the year. And before I knew it, I was scrambling over some icy and dicey tumbled traprock above frozen water. 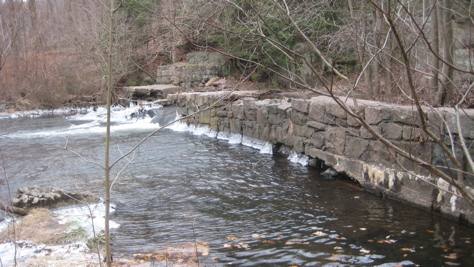 It wasn’t bad at all though; in fact, it was a welcome bit of excitement for me. The trail then rambles past an old dam and even uses the dam itself for a bit, just before steeply going up and over a lump of rock that is sort of a seam of basalt trap rock. Maybe it’s the giant’s mohawk now that I think about it. 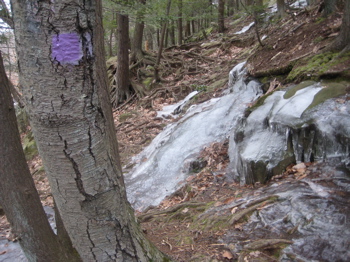 Since I knew nothing of the giant’s history before my trek, I was a bit surprised to hike up to what was clearly a rather large-scale quarrying operation. But the most interesting part of my whole day was the fact that the violet trail climbs up the foundation of an old building at the quarry. You can sort of see what I’m talking about here: 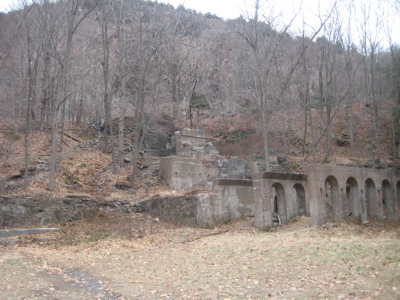 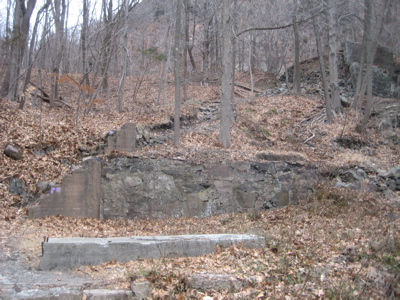 Notice the violet blazes going up the “steps” on the left 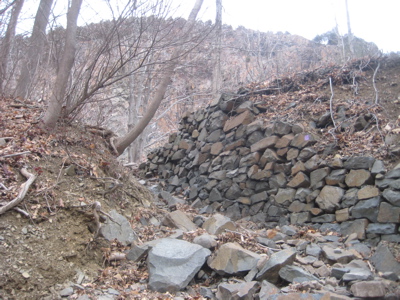 Whoever blazed this trail is a genius 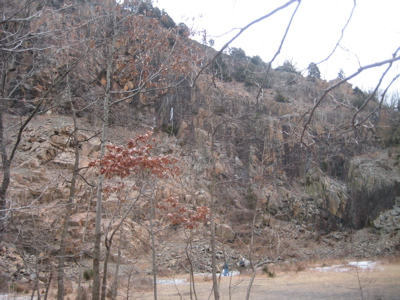 The quarry was what brought the SGPA together way back in the 1920’s. Noticing that the quarrymen were about to chop off the giant’s head, they banded together and ultimately won, achieving a designated a state park. So when you look at the ugly scar of the now 90-year-old quarry, understand that this giant lobotomy hasn’t “recovered” a bit. Think about that next time you hear a mountain-top mining executive talk about reclamation. 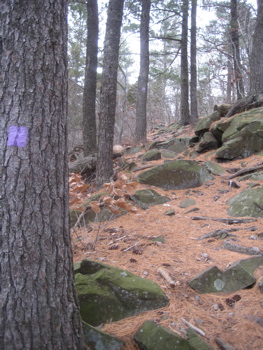 After the excitement of the quarry, the violet trail wound around the north flank of the giant in much the same way the yellow trail did on the south side. It crosses a couple steep little glens along the way, and in the winter I was able to see Meriden’s West Peak in the Hanging Hills to the north. Nothing was too difficult until maybe the giant’s left hand.

Yeah, that’s right. I had no idea before my hike, but there’s more to the giant than just a head, chin and leg. Nope, he’s got it all (almost) and despite spending a couple hours and over five miles on the giant, I only stood on one part of his anatomy on this day: his left hand. So here’s my left hand on his left hand: 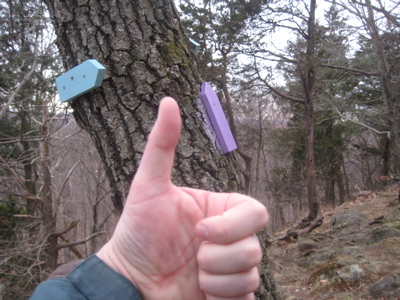 Just after the hand (marked by a blue spur trail heading southeast), there is a short scramble down off the giant onto a wider and rather pleasant walk through the woods back to the Chestnut Road parking area. Along the way, the violet trail shares some steps with the cross-country ski trail. I wouldn’t mention this (as it’s not part of the required hikes) except for the fact that some skilled artist really, really takes pride in their blazing skills: 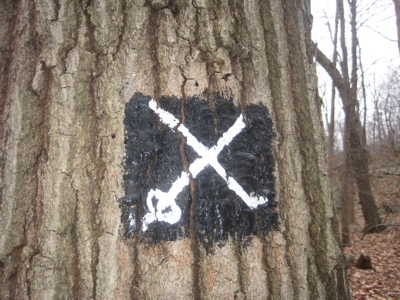 Overall, I loved my first real foray into SGSP. Now that I’ve read more about it, park enthusiasts are constantly trying to convince visitors to check out some of the trails that don’t head right up to the observation tower. Now I know why… both the yellow and the violet were fun and interesting hikes that I would recommend to anyone. Especially when trying to avoid the crowds. 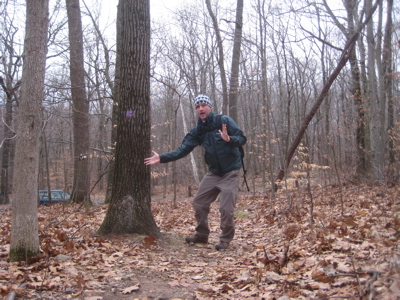