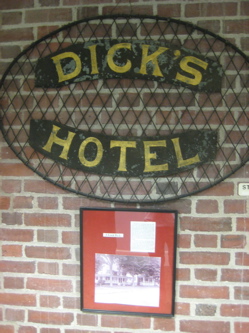 As I begin to write this page, I’m confused. Confused by myself. Confused on a couple accounts: One, why in the world did I put off writing this visit up for almost a year and a half and two, where did I get the information that this place was a museum in the first place and three… Should I maintain that it IS a museum, at least in part? Hm.

Boy, aren’t you now excited to devour this piece? Good, so let’s get to it. 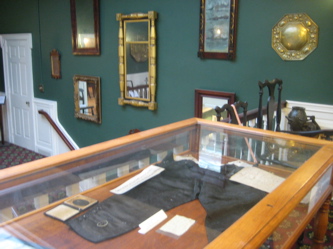 visits sometimes and then there are the times I do it on purpose waiting to go somewhere else that I want to tie to the original piece. The C.H. Booth Library and Museum(ish?) fits exactly none of those descriptions. Not even a little bit. It’s just one that sort of slipped through the CTMQ cracks… Of which there are many.

Of course, it’s completely absurd for me to spend time writing about how long it took me to write about this visit since my blog isn’t time-sensitive in the least, and I’m confident in saying that the very few people who read this page, or even one-third of this page, don’t give a hoot about any of this internal whining I’m doing. They probably only came here by accident and are looking for the library’s hours or if they have the latest Sue Grafton novel on the shelf. Did she ever get to Z and if so, did she name it “Z is for Zzzzzz?” 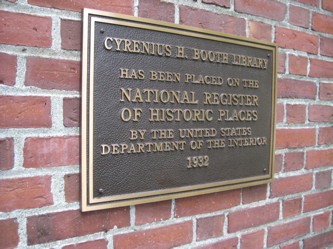 I really don’t know how this place ended up on my radar, but obviously at some point I read somewhere the historic library was considered (or contained) a museum of sorts. I can no longer find that reference, but it doesn’t really matter; the library does have extensive historic exhibits all throughout the library with accurate and informative signage. And furthermore, the Newtown Historical Society writes on their webpage (for their Matthew Curtiss House Museum) the following: “Much of our collection is housed in the C.H. Booth Library.”

I think that should be enough right there. Not many town historical societies do that and those that do, don’t do it as well as they do it in Newtown. So I’m feeling better now about proceeding now that I’ve uncovered at least one evidence for this being a true museum. 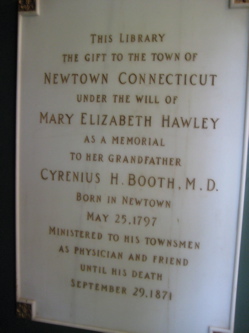 Before hitting the libruseum, I did some hiking out in western Connecticut. It was a hot and humid July day so by the time I arrived in Newtown, I was a bit bedraggled looking. No matter, it’s not like libraries – even fancy historic ones in affluent towns like Newtown – disallow sweaty hikers with over-eager cameras into their halls. Though I did feel pretty out-of-place, I must say.

Okay, so what’s the story behind this place? Well, for one thing, the Dick’s Hotel sign hung in the entryway led me to this tidbit: “During the 1880’s, two hotels on Main Street, Dick’s Hotel (at the present library site, later the “Newtown Inn”) and the Grand Central Hotel (near the crossroads, later the “Parker House”) did a flourishing business in summer boarders. The “broad and neatly kept streets” of the village and town’s “commanding views in all directions”, as described by the railroad, did appeal to many who bought old farmhouses and built cottages as summer and retirement homes in the late 1880’s, 1890’s and early 1900’s.”

That’s great. But I want to know about the library proper. Let’s let Newtown Town Historian Daniel Cruson lay it on us: 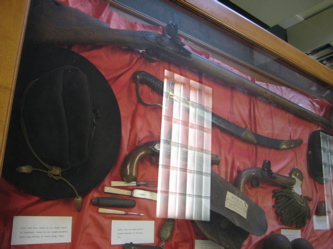 The Cyrenius H. Booth Library was a posthumous gift of Newtown’s benefactress, Mary Elizabeth Hawley. It was named after her maternal grandfather who served as a physician in Newtown for fifty years, between 1820 and his death in 1871.

The library was opened on December 17, 1932 with a capacity for 25,000 volumes. It was considered one of the most modern libraries of its time, containing features which are missing from many libraries even today. It was completely fire proof and its rooms were constructed with cork floors and acoustic ceiling tiles to deaden sound. The building also had a built-in humidifying unit and a centralized vacuum cleaner. The architect for this building was Philip Sutherland who also designed the Edmond Town Hall in Newtown. 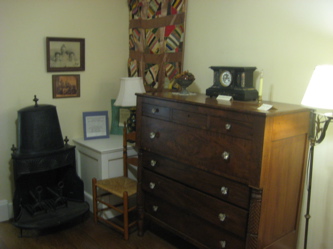 Miss Hawley, in addition to donating money with which to construct the building, left a quarter of a million dollar trust fund which was to generate operating revenues from the interest it earned. Until the early 1980s the taxpayers of Newtown paid nothing for the library.

In the summer of 1996, the library began construction of an addition to the rear of the old building that would double the available floor space. The ribbon-cutting ceremony for the new addition took place January 11, 1998. The expanded space provides areas for meetings as well as displays of art and historical artifacts of Newtown from the library’s extensive collection. 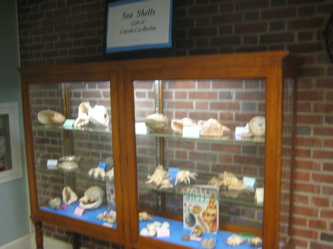 Oooh! Did you catch that last sentence?! The pieces are falling into place now as to why I include this place on my list. Now, I have no idea how permanent or impermanent the displays I saw are. At the time, I was under the impression that the many historic displays around the library (and I mean EVERYWHERE) were there for the long-haul. Now I’m not so sure, but really, it doesn’t matter. In fact, it would be really cool if the library changes their historic displays a couple times a year. So be advised that everything I saw in July 2009 and took pictures of – may not be there anymore at all. (I would assume the whole dining rooms remains intact, however.)

I’ll quickly discuss some of the cool stuff I saw there – and you can be sure that whatever they have on display should you visit will be just as cool. Trust me. Stuff like this old bike: 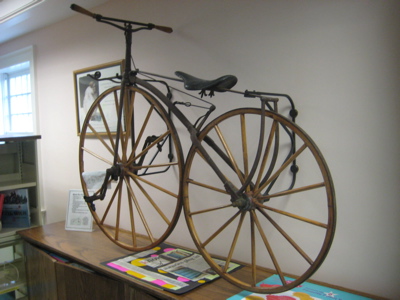 That thing dates from the late 1800’s. The seat slides back and forth so any rider can reach the pedals and there’s actually handbrake for the rear wheel. I found that very surprising. 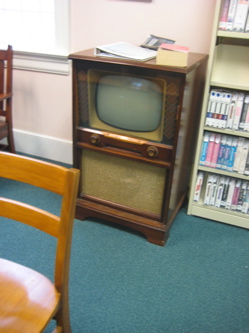 There was an old television for some reason. And of course a nice collection of locally made old furniture. Including the Chippendale desk from about 1780 seen here to the DIRECTION. It’s made of cherry as most local stuff was in the mid-to-late 18th century. The medical books inside it are from Dr. Cyrenius Booth’s very own collection and though you can’t really see them too well, some of his dental tools are in there as well.

There is a room set up entirely as a Federal period dining room. Although my picture is hopelessly blurry, you can see well enough that this isn’t a room you often see in a town library. It’s a dining room. From about 1800. In fact, all the stuff in here is from Miss Hawley’s own home. The Sheraton tables, designed to be adapted for use as a dining table, are noted for their reeded legs. The table is surrounded by five Hepplewhite sheaf-back chairs. FIVE HEPPLEWHITE SHEAF-BACK CHAIRS I SAYS! The Franklin stove was made in New York in about 1820. (Pictures of this stuff appear throughout this page.)

I had to look it up; the suspense was killing me: Hepplewhite is an 18th century French design featuring detailed chair backs in shield, heart or wheel cutwork shapes and case pieces often featuring oval panel inlays. Now we know. 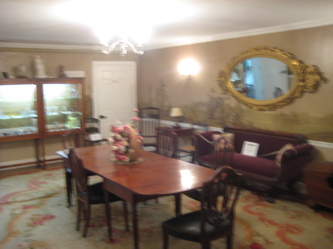 The display cabinets contain English luster and Chinese export china and American pressed glass. The Hitchcock side chairs and rocker were made in Riverton, CT. (CTMQ’s visit to the defunct Hitchcock Chair Museum). There is a nice display of bottles here too. Bottles, tin ware and other kitchen containers and – Holy Cow, I am so happy to have read what I just read! In fact, I’m just going to post a giant picture of the sign I’m referencing: 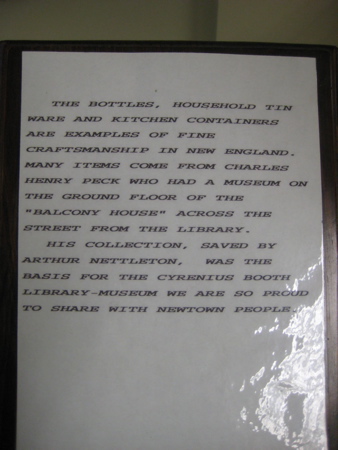 Aha! Sweet, sweet vindication! “… The Cyrenius Booth Library-Museum we are so proud to share with Newtown People!” So, if you dared doubt my intentions earlier – shame on you. CTMQ is never* wrong. 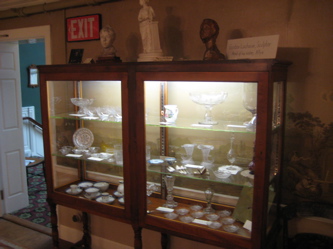 It’s sort of hard for me to concentrate on the museum stuff while in a library. I can’t imagine a place with more distractions, unless they put a museum in a Victoria’s Secret Runway Show. It’s a fun place to wander as the old library has so many nooks and crannies filled with completely random artifacts from Miss Hawley’s and Newtown’s past. There are collections of children’s books and toys and clothing that “indicate that the Hawley children were very fortunate in the 1870 time period.”

Even better, there’s a nice glass display case holding a bunch of old lanterns and lamps. These, of course, come from the collection of the Hawley family. As the display notes: “Please notice the ingenuity and variety of the devices to create maximum light.” So noted. Also noted? That this display calls to mind another defunct museum in Connecticut: The Winchester Center Kerosene Lamp Museum (CTMQ’s Visit here.) 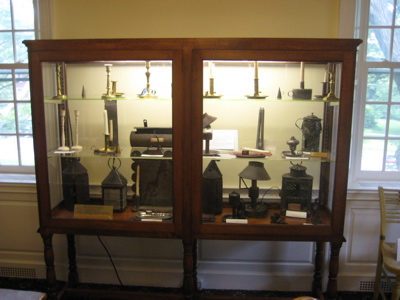 Off along another wall I found a nice display of Civil War memorabilia. Guns and bayonets and epaulettes. Letters and “satin britches.” And, more randomly, a set of small sculptures done by some Newtown artist 100 years ago. Some more old chairs and a whole wall of old mirrors. Ramping up the randomness is an old typewriter owned by one William A. Swanberg. 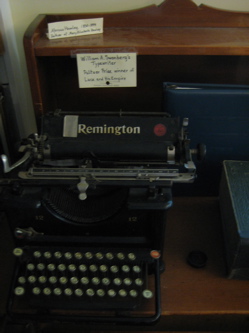 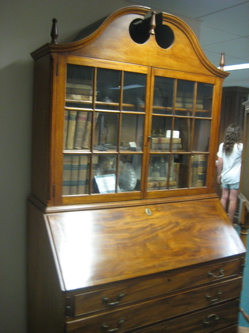 Pulitzer Prize winning William A. Swanberg. I’ll admit, I didn’t know who he was, but it turns out, he was a pretty famous and important biographer. The book for which he won the Pulitzer was “Luce and His Empire” about Henry Luce and how he ran Time Magazine. He typed up that book on this very typewriter! You can read more about Swanberg in the links below.

And you thought that was the pinnacle of Cyrenius H. Booth Libruseum Randomness? Ha! In some other chamber, I came upon this:’ 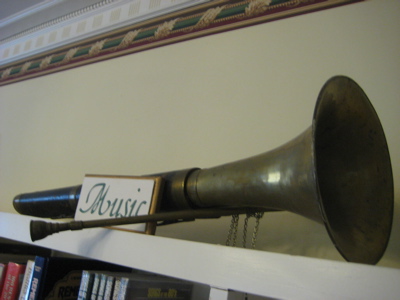 Anyone care to guess what that thing is called? Here’s a clue: It’s a precursor of the tuba… No takers? Why, that’s an ophicleide of course! It was a sort of bass bugle from the early 19th century. The instrument’s name comes from the Greek words for “serpent” and “keys”, since it was conceived of as a serpent (which is another old instrument, not a snake) with keys. Like the serpent, some found it difficult to play, and early twentieth century musicians felt it had a somewhat unpredictable sound, leading to the doggerel:

“The Ophicleide, like mortal sin
Was fostered by the serpent.”

I don’t get it and quite frankly, I don’t really care too much. I enjoy ending this page on something so random, as that pretty much sums up this place. 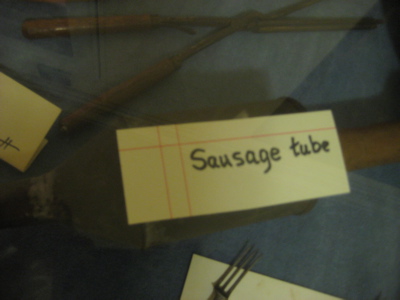 And then there’s this too. 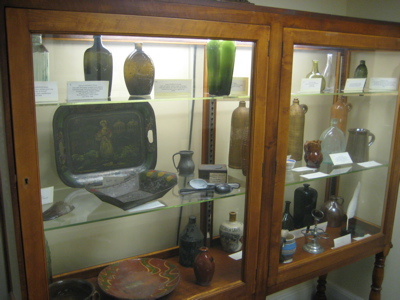 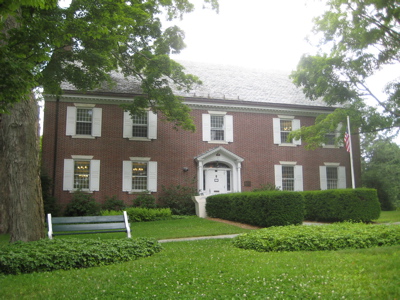 Not your typical library