I always feel cheap when the title pun is so easy. Oh well, I’ll get over it. What I’ll never get over is how many museums there are in Connecticut and that feeling of elation I still get when discovering ones I didn’t know existed. 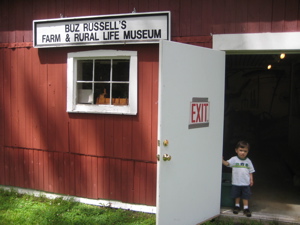 Such was the case of the Buz Russell Farm and Rural Life Museum in Woodbury. I had decided the day before to take Damian out to the Flanders Nature Center and in checking out their website, I noticed a quick mention of this cool little museum on their property.

Wow, imagine deciding to go to one museum and getting two for the same price – Free! Okay, maybe that imaginary scenario will work better if you also imagine you write the preeminent Connecticut museum website first. Trust me, it’s as exciting as it gets. 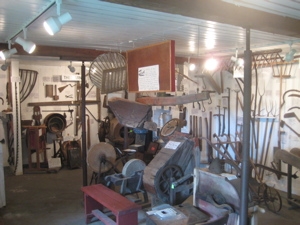 Once Damian charmed everyone at the little farm area at the nature center, I made my move. The Buz Russell Museum was locked up tight, but I needed to get in there. I asked a woman who told me that another woman had the key, but she was out to lunch and her return was imminent… at some point. 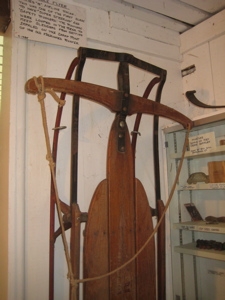 I held out hope that she’d arrive before Damian had had his fill of baby goats and feeding the pig hickory nuts. At some point, Damian’s diaper had its fill so we went back to the car for a change. On our way, we passed the magical woman with the key! I couldn’t have been happier.

She unlocked the door, turned on the lights and let us roam freely. Granted, our roaming was limited to about 20 square feet, but we still enjoyed ourselves. 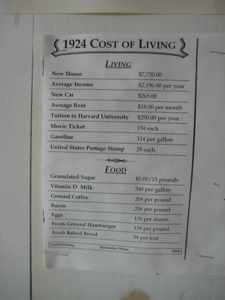 Yes, I’ve already seen almost everything here in other museums before – and surely will again. But that’s not the point. Buz Russell, from what I can gather, is a real (possibly still alive) local guy who has an affinity for antique farming and “rural life” stuff. His museum has a warm and homespun feeling to it that I come across only rarely on my adventures.

The signs are all handwritten – but informative and neat. The smells from the nearby animals waft through the door and provide a sense of place that is also rare. 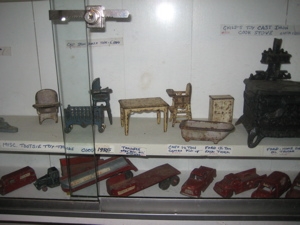 Russell is from nearby Bethlehem and I believe started his museum in his own basement. Fellow retirees used to come to his house and check it out along with a few Boy Scout Troops. I can’t be sure how his private collection came to be housed at Flanders Nature Center – or if this is all of it – but I do know it’s there now.

The space is divided up into several sections – The Barn, the Woods, the Field, the Ice Harvest, the Dairy, and Recreation. Russell has jam-packed in items pertaining to these facets of old-timey rural life in a simple to understand and fun to view way. 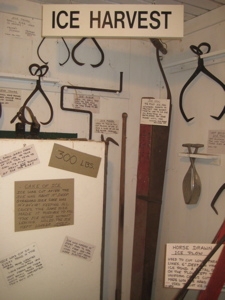 My favorite exhibit is the recreation one. Perhaps because it is unique to these antique farm museums, but I think that’s only a part of it. While I was certainly denied the latest and greatest toys as a kid; no Atari, no Nintendo, etc., and I had always hoped for a more organic childhood for Damian, it’s always interesting to me to think about growing up a kid with pretty much glorified sticks and moving metal parts.

[Note: An odd quirk of Damian’s Smith-Magenis Syndrome is an obsession/affinity with and for electronic gadgets. It’s true… While at a conference recently where we met several SMS kids, teenagers and adults, they all walk around with various cell phones, Blackberries, toy laptops, iPods, etc nearly constantly. Damian is no different. Whatever works.] 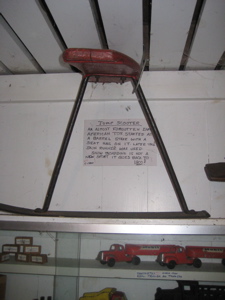 The best was a thing called a “jump-scooter” which was essentially a chair seat nailed onto a ski type thing. As Russell captioned the display, “Snowboarding is not a new sport! It goes back to 1800!” A 1935 American Flyer sled was cool to see too. According to the sign, before the model at the museum, the runners were pointed in the back and kids used to get impaled on them from time to time. Such a simpler time. 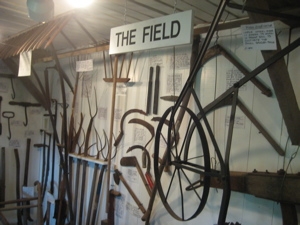 There is also a fairly large collection of metal toy cars and trucks and little furniture pieces. While I can’t be sure, they sure looked like they tasted of lead. Delicious.

Over to the “The Woods” display, we took in all sorts of saws and wood-cutting tools. I’m sure they were interesting but we were more interested in getting a picture of our eponymous sign. 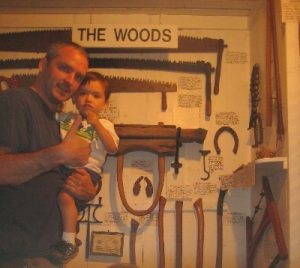 Russell built a model of a pile of wood. While wholly unnecessary, I found it to be charming. The story about the model stack of wood was all about how farmers had to store wood for warming their houses during the winter. As if a) we didn’t know that and b) we couldn’t imagine that, he provides visitors with a visualization of what a pile of wood looks like. I love that.

And now I know that a true cord of wood is actually 4’x4’x8′. I’m not sure anyone is selling cords that size these days. 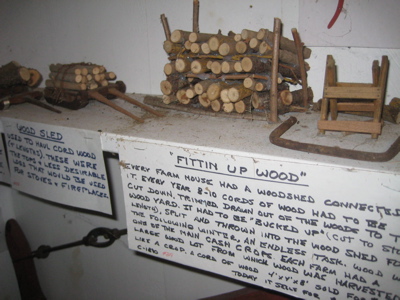 We also saw an antique Boring Machine. Ah yes, a boring machine… My very first museum title pun came from this implement. Such fond memories… Back when I had no idea what I was getting into!

On to “the Barn.” Russell’s collection is certainly extensive and complete. While you can’t read the signs here, I can. Challenge yourself to guess what half this stuff was used for – and if you’re curious, I’ll be happy to help you out, just let me know. 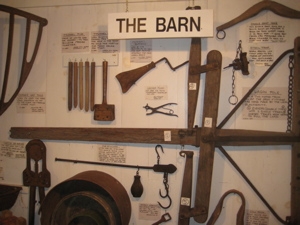 Next to the barn stuff is the Dairy stuff. All the things you’d expect to be here are here: Old milk bottles, milk strainers, milk buckets. The stories of the quintessential milkman are here too. But what about that long metal thing at the top of this picture, half hidden by the Dairy sign? 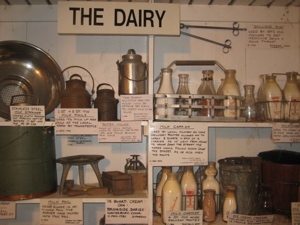 I’ll even tell you that it’s called a Balling Gun. No, it’s not what you may think it’s for… it is a long metal shaft that was used in the early 20th century to shove down a cow’s throat to give it some medicine. See, we’re learning together.

Up next was the Ice Harvest display, something I’ve grown accustomed to seeing now. I understand why it warrants a display here, but it often makes me wonder every time I see a similar display at a town history or even nature museum. Back in the day we had to cut ice blocks from ponds in order to have ice. It’s not that crazy of a concept, is it?

Although I did find it interesting to learn – where, I forget – that enterprising entrepreneur’s used to actually cut, store, and ship ice down south, sometimes all the way to the tropics. That’s pretty cool – and always will be cool.

A focal point of this small museum is a model display of the Mill Rock Farm in Bethlehem. I know Buz Russell is from Bethlehem, but I don’t know if he grew up on the farm – though it would certainly make sense. 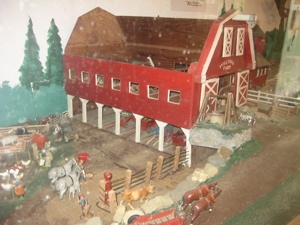 The small metal figurines are old – really old – and the barn is handmade, perhaps by Russell himself. He has had the toys and barn his entire life, at one point passing it on to his son and then wrapping it up in newspaper again for a couple decades.

I could tell that the thing is probably worth several hundred bucks, but is priceless to Mr. Russell. Sort of like CTMQ is to me I guess.

Our day at the museum was done when Damian burst forth from the dimly lit room and ran back down the hill to feed the pig some more nuts. I can’t blame him… I think he’s even seen a few ice harvest displays in his life. 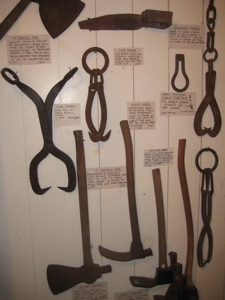