Casual readers of CTMQ can be forgiven for thinking all of our adventures with Damian are wonderfully happy little trips through the tulips. Unfortunately, this is not always the case – I tend to focus on the good stuff here and of course only post the better pictures. To be blunt, Damian is a challenge due to his developmental delays. We never have any idea how he’ll behave literally from one minute to the next. Ah, the joys of his Smith-Magenis Syndrome. It keeps life interesting at least. 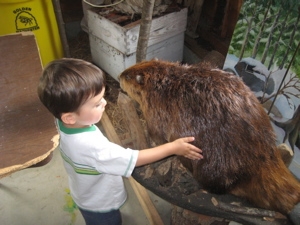 Why mention this on this page, my 129th museum in the Flanders section of Woodbury? Because every once in a while I have an experience with Damian that is just wonderful beyond words. Fortune smiled on us during our visit – and I can’t give enough credit to the staff at Flanders.

On top of that, I found a museum here I never knew about previously – the Buz Russell Museum of Farm Life & Antique Tools! Who says Christmas doesn’t come but once a year? 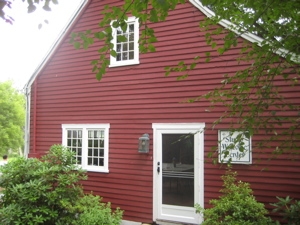 Flanders Nature Center & Land Trust is a nonprofit organization that conducts educational programs and conserves and stewards valuable open space. Natalie Van Vleck, an avid environmentalist and successful farmer (who had been an accomplished visual artist in her early years), founded the nature center in 1963 on her 200-acre farm. 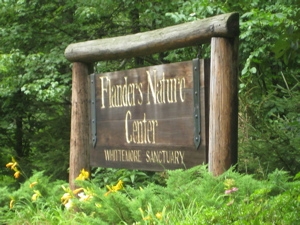 Flanders holds in trust nearly 2,000 acres of open space in Woodbury and neighboring towns. The organization serves as the steward of seven nature preserves, each with its own character and attributes, such as woodlands, lakes, ponds, streams, fields and meadows, a bog, and marked trails. 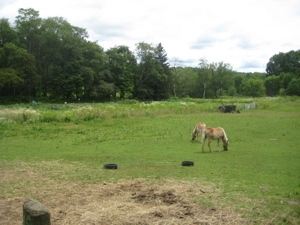 On our way to the nature center, Damian and I quickly stopped at the 686-acre Whittemore Sanctuary on the east side of town. While we didn’t hike around the property (Damian was sleeping), it sure looked like a nice place for a short walk.

Flanders is a little bit different than some of the other nature centers around the state. There are several buildings all over the property, each containing different exhibits and/or educational areas. 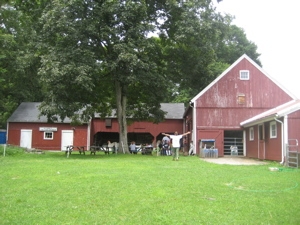 Our first stop was the main building, the Van Vleck Studio & Welcome Center. Some of Natalie Van Vleck’s paintings are on view here in a building that Natalie Van Vleck designed. We also met Arthur Milnor (I think), the executive director of the whole shebang. While Damian enjoyed the large ceiling fan, Arthur explained the sanctuary’s layout and highlighted some of the stuff Damian would most enjoy. Heck, he even invited us to join the summer campers for the hot dog cookout that was underway down the hill.

I had brought a picnic lunch, so we politely declined and poked around the room a bit. There wasn’t much to see in there, so we hit the (dirt) road and drove across the property to check out the actual nature center. 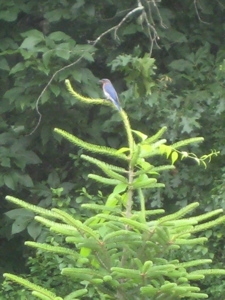 It was closed, but had some nice picnic tables for us to enjoy our lunch. Just me and Damian, alone in the middle of the woods. And before we knew it, several bluebirds were flitting about us; in the trees, on their homes, amongst the reed grasses. 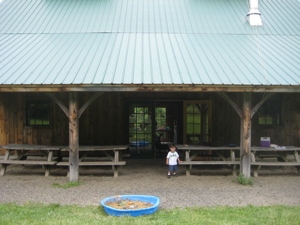 As we finished up lunch and lamented the fact that the nature center was closed, a car drove up and disgorged two women who worked at Flanders! They had a little dog (huge bonus for Damian) and more importantly, they had keys to the building! Voila! I wouldn’t have been able to call this place complete without touring the nature center proper. 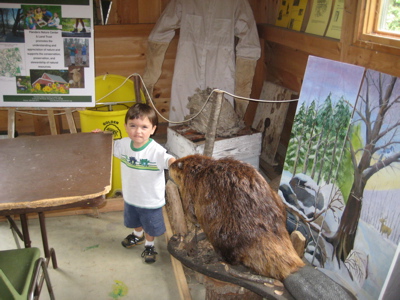 Inside the small space, I was impressed with how woodsy the little cabin felt. It smelled of wood – which makes sense since there was wood everywhere. Several cross-sections of trees for kids to count rings littered the floor. Above them, a menagerie of stuffed and mounted woodland creatures found in these here woods. 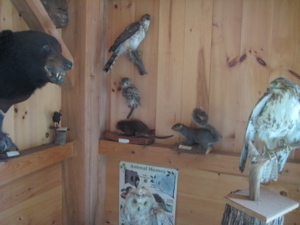 And yes… There was a black bear head. Mission: Complete.

Back outside we finished our lunch, said goodbye to the women, the dog and the bluebirds and hopped back into the car. We drove back along the dirt road past the maple sugar house and something called the Trail House. Back out to the main road and down it a pace to the educational farm area we had been promised Damian would enjoy. 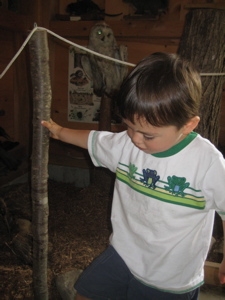 We parked and walked over to the barns and were greeted very politely – but also sort of sheepishly. And not just by the bleating sheep. There were several Flanders workers assisting several special needs kids outside at some tables and I guess it’s not every day some guy comes trotting up to them with a toddler in tow. 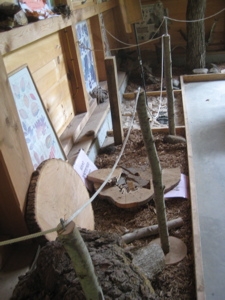 Regardless, we were welcomed and were immediately treated to a soft rabbit for Damian to pet. Just then, we were regaled with some loud – I hesitate to call it singing – singing from inside the barn. The woman with the rabbit told me that we had just stumbled into a special needs day camp and that – I interrupted here there and told her that Damian has special needs and we appreciate the situation. I merely explained Damian was non-verbal and has many behavioral issues, but that he loves animals and if we weren’t in the way, we’d be fine. 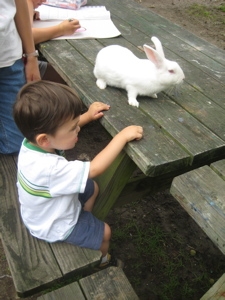 Before we knew it, the Flanders folks rolled out the red carpet for Damian. Now, I’m not saying they wouldn’t do this for any kid who happens to stop by, but I can’t commend the staff enough. It was wonderful. We were made to feel right at home as the staff escorted us around the barns and introduced each and every animal to Damian. 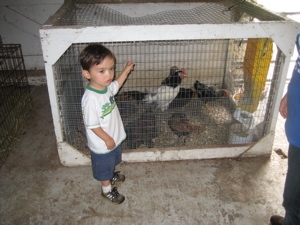 They all knew how to talk to him and just seemed to intrinsically know what would work for him versus what wouldn’t. Neither of us could stop smiling as he got to pet some baby goats and check out some chickens. Damian took to the staff immediately and acted like it was “his” barn right away. 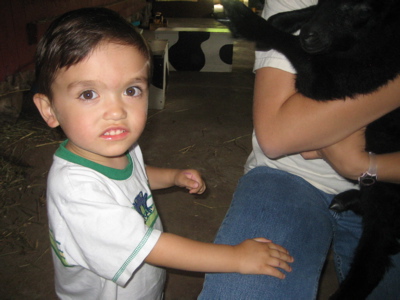 The other kids were curious about us and offered up some high-fives and smiles. At one point, Damian wandered over to the kid sing/yelling into the karaoke machine and – if you know Damian, you know what’s coming next – started pushing the buttons and flipping the switches. The karaoke kid seemed to recognize that Damian was a little kid and while he was upset, he sort of pantomimed for Damian to kindly turn his machine back on. 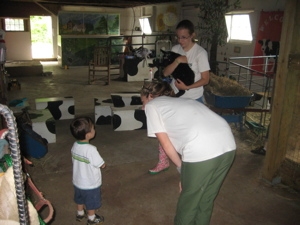 Damian stared at him, pointed out his wheelchair to me, and then turned the machine back on and signed “music” to the guy, telling him that it was time to sing some more. Damian stood and watched him for a while and the kid really seemed to enjoy the audience (the others were most likely quite tired of this daily – LOUD – ritual.) It was very gratifying to watch the whole thing transpire.

The staff was eager to show Damian whatever other animals they had on hand. One produced a baby snapping turtle. This was pretty funny to me because our baby snapping turtle; yes, we had one of the same age and size, just died the day before. I… Can’t… Talk about it. Moving on… 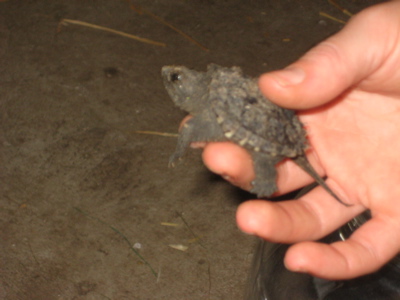 Outside, we ran down the hill to see the big fat pig and feed her some hickory nuts. Man, is there anything better in this world to Damian? I think not. A fat pig wallowing in deep stinky mud eating stuff out of his hand… He was in heaven.

Which was nice, because so was I. For I still had the Buz Russell Museum of Farm Life & Antique Tools to check out – and the lady with the key had just arrived! 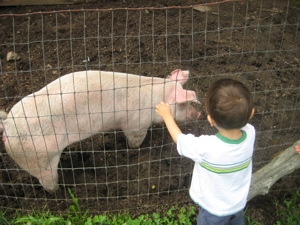 I really do want to thank the really, really cool staff at the Flanders Nature Center – the women at the nature center who let us run around inside for a while and of course the staff over at the barns who really seemed to connect with Damian and went WAY out of their way to show him the best time possible. And for summoning the Buz Russell Museum of Farm Life & Antique Tools key holder for me. 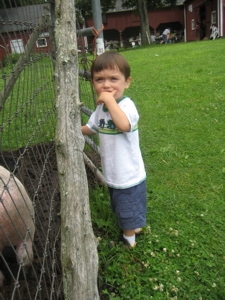 I was proud to be Damian’s dad and extremely happy to happen upon such a welcoming and understanding museum staff. 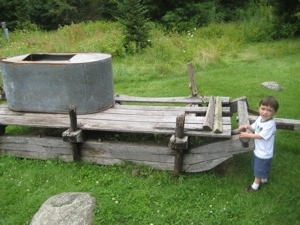