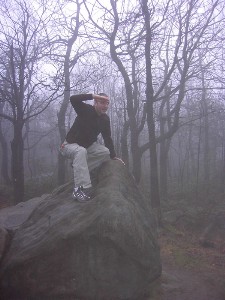 Drizzle, fog, coalmines, steel mills, mud, barren winterscapes and Amish people do not usually make for an exciting road trip. But in the case of bagging Pennsylvania’s (as well as Maryland’s and West Virginia’s) highpoint, it certainly… Um, no, it still doesn’t. It’s been said that the state of Pennsylvania is essentially Pittsburgh and Philadelphia with Alabama in between. The oh-so welcoming shotgun blasted roadside sign at the bottom of this report certainly gives credence to that idea, but by driving west from Connecticut, I aimed to discern this for myself. I didn’t want to make the long drive across the state from home in one day, so we drove three hours to Wilkes-Barre in the Poconos the day before heading to the highpoint.

Actually, there was no way I could justify an 11-hour drive to Mt. Davis alone, so I sought out a couple curious side trips. Bucking my usual rule about writing only about the actual highpoint hike/drive itself, I must mention that we made a short stop at Waterbury, CT’s “Holyland USA.” (CTMQ Visit here.) Afterwards, we only drove as far as Wilkes-Barre, PA. 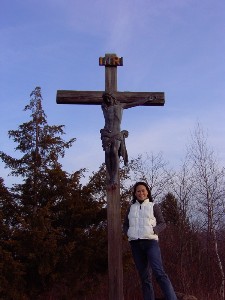 While enjoying our free dinner at Chili’s (I had a coupon) that evening in Wilkes-Barre we asked the bartender where the hot spot was in town. Without hesitation she told us “The Woodlands,” just up the road. In a way, she was right… Neither Hoang nor I had ever been to such a place. It’s a huge conference hotel nightclub bar patio restaurant lounge ballroom center thing. Hoang and I have traveled all over our country and have experienced the nightlife of many, many cities. Never before had we seen anything quite like The Woodlands. We stayed mainly in one area where a halfway decent house band played 60’s and 70’s funk and R&B. Wilkes-Barre, we decided, resides wholly in the Twilight Zone. 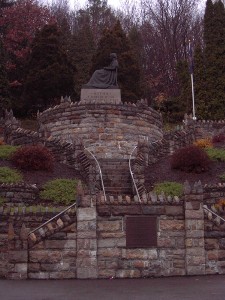 We awoke on Saturday, the highpointing day, to a cold downpour. We plowed through our continental breakfast and hit the highway. After an hour or so, we exited and drove north through Ashland. The dreary weather perfectly suited our Dickensian surroundings… Central PA coal towns are certainly depressing. I’m sure they were bustling burgs back in their heyday, but now they are just destitute ugly little towns. However, the serial killer cashier at the Ashland gas station next to the freaky huge old lady-in-a-chair statue was certainly a ray of sunshine in his uniquely maniacal way. He looked just like Jame “Buffalo Bill” Gumb and sounded like the Mouth of the South, Jimmy Hart. He was awesome. 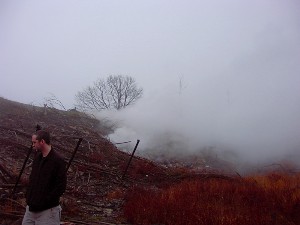 Past Ashland was our morning destination — Centralia, PA. Centralia is infamous for being on fire now for 40 years or so. There are underground coal seams that caught fire and will continue to slowly burn for hundreds of years to come. As a result, most of the town has either burned down or moved away. There are still the old street grid systems and fire hydrants around, but no more houses. Sulphurous smoke billows from vents around “town,” as well as via random holes in the ground. Hot to the touch asphalt buckles, dead plants abound, and birds don’t chirp. I was half expecting either Yoda to wobble out from a smoke cloud or to hear “My precious” on the wind. It was fascinating. Centralia, like Holyland USA, is definitely not worth it as a lone destination, but it is still very interesting. 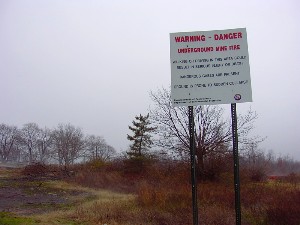 Once on the two lane (rather hilly, rather curvy) Pennsylvania Turnpike heading west, conditions were made much worse by a pea soup fog the likes of which I’ve only seen a couple times before in my life. Visibility was ridiculously limited to just a few car lengths. Fortunately for us, there was hardly any traffic. If it wasn’t impossible to see, it would be raining. Only Joseph Conrad could aptly describe the conditions. At least this made the “Alabama” portion of the trip somewhat exciting. We did pass several old barns with tobacco ads painted on them which, I understand, was a common practice back in the day. 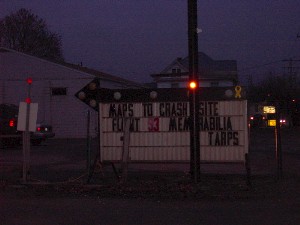 When we finally reached our exit in Somerset, the muted daylight was waning, but our excitement was building. A diner marquee had a “Welcome Bear Hunters” on it. Another disgustingly advertised 9/11 PA Flight 93 Crash site maps and “memorabilia” whatever that may be. Miller Lite seems very popular here. On through the foggy gloom down to Meyersdale we wound. Holmes’ book says to take Route 219 and look for the right hand turn. Be sure to take Business Route 219 as it takes you to the heart of town, not around it. Once there, you’ll find the American Legion Post with the huge tank on it’s lawn. 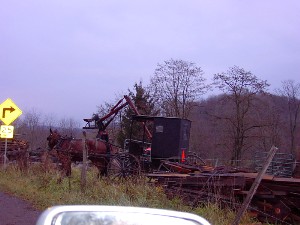 Nearing Mt. Davis, just south of town, you quickly enter Amish country. I had read that they lived here, but never really thought about it. I was very surprised that farmland and barns surround the highpoint. We did pass a few Amish in their horse and buggies, as well as what appeared to be a honest-to-goodness barn rising. Signs pointed the route all the way to our destination, which was nice. Mt. Davis has a rather interesting history, all of which you can find elsewhere on the Internet. I think the original name, Mt. Negro, is the most intriguing. As you enter the Forbes State Forest, this sign does retain the highpoint’s historical name to some extent. 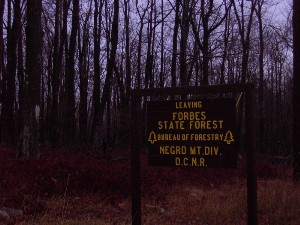 As you can see in the pictures, the dense fog and approaching sunset created a gloomy, yet serene setting at the summit. The skinny well-packed road took on a very eerie quality… With the fog having a bluish tint for some reason. (Perhaps due to the nearby mill and plant emissions?) Of course, the lot at the picnic and summit areas was completely empty, which was somewhat disconcerting. 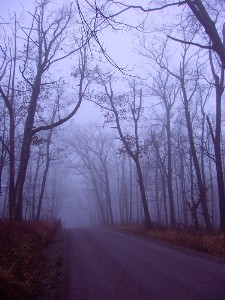 The fog was so thick; we had no idea which way to walk to the summit. It didn’t take but a minute to park and figure it out. The walk was maybe 75 yards or so to the fire tower and the boulder containing the benchmark. I found it pretty strange that Pennsylvania’s highpoint was more or less flat. Having hiked the Appalachian Trail through PA, and having skied in the Poconos, I was expecting much more of a pointy-topped mountain. When I expressed this tidbit to Hoang, her expression told me, “I don’t care.” She’s the best.

There are several interpretive signs around the summit area, which Hoang checked out while I climbed the summit tower into the clouds. Due to the conditions, I couldn’t see anything… Due to Hoang’s acrophobic condition, she stayed on terra firma. You can barely see her through the fog in the picture. 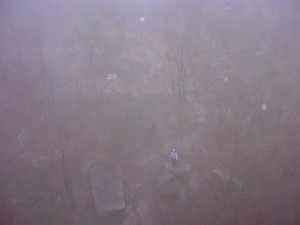 On our way back to the Turnpike, we passed the cutest Norman Rockwell painting come to life. Two little Amish boys were patiently waiting alongside the road for us to pass. There they stood, side by side in their little Amish hats and little Amish overalls, puppy in tow, one on a homemade scooter. Their plaintive freckled faces gave us sheepish smiles as we stared at them like the big city folks we are. I really wanted to take their picture, but felt that it would be intruding on their simple way of life. I can’t imagine how I’d have felt at that age if some random couple drove down my street, stopped, rolled down the window, snapped my photo, and sped off. I think I made the right decision, but man, that would have been a great shot. 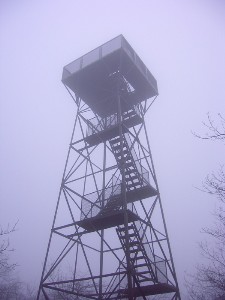 Once on the highway towards the Pittsburgh Westin, we reflected on our day and a half traipsing across PA. Was PA really as I’d heard it described? Nah, I wouldn’t say it’s like Alabama… The fog, the stillness, the oddities, the time warped people (1980’s in Wilkes-Barre, 1880’s in Meyersdale)… Central Pennsylvania is a huge David Lynch set piece. In fact, that night after dining up in Pittsburgh’s Mt. Washington area, we rode the Duquesne incline back down to the river expecting to catch a taxi back towards the downtown area. Unfortunately, there was no taxi stand to be found, so I inquired about calling one to come get us. The elderly gentleman manning the ticket booth was pure David Lynch. Old, doddering, clueless — and armed with incorrect taxi company phone numbers. Walking alongside the highway to reach the downtown area was the perfect surreal ending to our whacked out day. 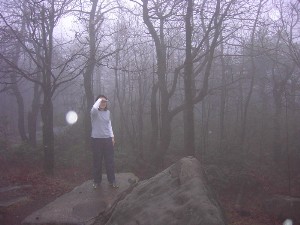 Perhaps the next day would be different — Looking at the map to determine the most efficient route to Frank Lloyd Wright’s Falling Water (which we were going to before Backbone Mountain in Maryland), I noticed that we’d be driving through, where else? Normalville. Ha. 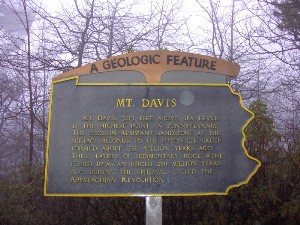 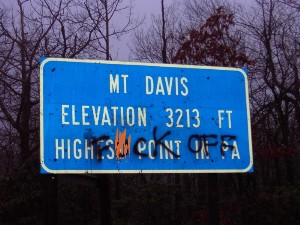