CTMQ > Everything Else > Religious > 154. Museum of Jewish Civilization

2019 Update: The museum dropped Sherman’s name and is now just the Museum of Jewish Civilization. References to “the Sherman” below are historical.

Let’s dispense with it right away: The University of Hartford has a very high percentage of Jewish students. So does my hometown, West Hartford. So it stands to reason that UHart (which straddles the West Hartford/Hartford line) is home to a museum dedicated to Jewish civilization and history. 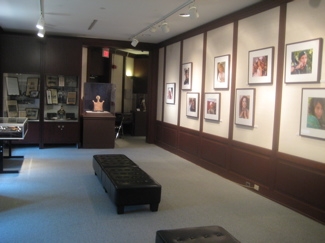 The Sherman museum occupies the space formerly filled by the Museum of American Political Life which by all accounts was a really cool little museum.

The museum is but a small part of the Maurice Greenberg Center for Judaic Studies at the University. The Greenberg Center is devoted to teaching and original research in Judaic Studies from the Biblical to the modern periods. Faculty from around the world have created programs that are diverse and stimulating to the student body. Founded in 1985, the Center offers UHart students an opportunity to choose from a rich array of exciting classes in six different areas: History, Bible, Jewish Law and Literature, Hebrew and Yiddish. 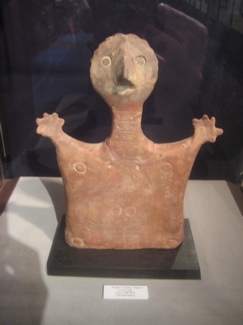 Heck, not only that, they can major in this stuff at UHart; Judaic Studies, pre-cantorial studies, or Jewish education (an integrated, dual major in Elementary Education and Judaic Studies). I find that interesting for some reason. 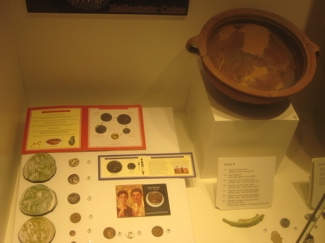 And just to wrap up the area’s Jewish cred,

the University of Hartford’s Hillel Foundation works to provide a warm community for the many Jewish students. A Kosher meal plan, religious services, social programs, and gatherings where students deal with contemporary issues are all offered by Hillel. In addition to the programs of Hillel and the Greenberg Center, you will have an opportunity to take part in the vibrant Greater Hartford Jewish community. Situated near the campus are some ten synagogues of all traditions, two religious day schools, the Greater Hartford Jewish Community Center with a Kosher restaurant, and the Hebrew Home and Hospital. 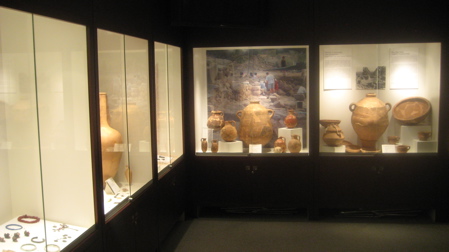 Yeah, less than a mile up the street is the huge JCC which houses the Chase Art Gallery. Next door to that is another giant building which houses the Jewish Historical Society of Greater Hartford, among other Jewish organizations.

To sum up: I live among the Chosen People.

When visiting the museum, the main obstacle is hitting a time when it’s open. It’s not easy, but they do answer their email rather quickly and nicely. One pleasant surprise is that UHart is kind enough to have centralized free visitor parking (K Lot) which is far more than I can say for UConn or Yale or Trinity or Wesleyan. The museum is located just inside the library door to the left through another door, and is squeezed into a long and skinny sort of railcar room. Whatever works… Museums aren’t picky.

Staffed by a very nice student “guard” who was more interested in texting than in me (which I usually have no problem with at all), I entered the small museum and immediately realized I was about to be happily surprised. I don’t know what I thought this museum would be, but I didn’t think it would house so many ancient artifacts of Jewish, um, civilization. Like the museum’s name says. Because I’m dumb. 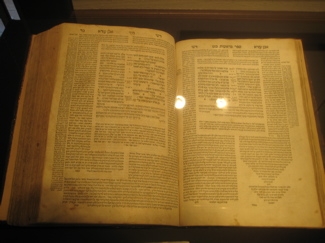 The Sherman Museum is a teaching museum and its primary goal is to tell the story of Jewish civilization for the general and academic communities of Connecticut.

Their minimalist website doesn’t do any justice to the museum’s collection at all – and sadly, I’m not sure I’m capable of doing it either. The short blurb on their webpage notes,

The Grae Collection will be on loan to the Sherman Museum for the next two years and includes antiquities from Mesopotamia and Egypt as well as items from the Middle Ages and the Modern period. In addition, the personal collections of local individuals will be highlighted including a rare family Bible from the 16th century on loan from Judge Howard Scheinblum. 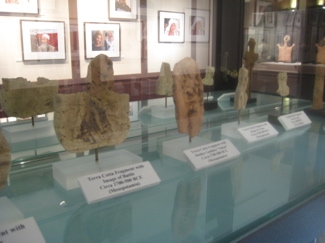 And now that I’ve visited, I’m left wondering what will be left of the museum once the Grae Collection leaves. Perhaps the whole museum is only temporary? Sort of like its predecessor, the Museum of American Political Life? Is this how UHart does things? I don’t know, but I’ll keep an eye on it in the years to come.

2019 Update: I can’t seem to figure out if this museum still exists or not.

One wall of the museum’s first (of two) rooms is reserved for the temporary exhibits. During my visit, it was a photographer who took portrait shots of people in Israel. It was called “Faces of a Nation” and featured 20 photographs by local photographer, Lena Stein, that chronicle Israel’s multi-cultural society. The neatest thing about this exhibit was that the pictures contained no labels at all – allowing visitors to try to draw their own conclusions about the person’s race or religion. Which is obviously impossible and yet, they blow each other up over their about that stuff with regularity.

But getting back to the Grae Collection – a brochure states that

the Joel Grae and SusAnna Bernard Grae Collection is now part of our regular collection of antiquities… The “Art and Artifacts from the Collections of the Graes includes pieces that were a part of ancient near eastern art and religion as far back as 2000 BCE and artifacts that were created in the 20th century. 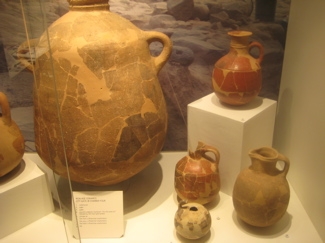 So who knows… I can only assume most of this stuff will stick around for a while. One part of the museum that I KNOW is permanent is the Jewish Music section, featuring the Cantorate, highlighting the way Jews used the arts to express their spirit. Most of the collection is from the Irving “Chick” and Fran Waltman Collection. I didn’t really take any notes at the little museum, and my photos of the descriptions of the items came out terribly fuzzy. I shall do my best.

The exhibit documents the musical career of one Julius Epstein from Blah Blah, Russia (I can’t read the very long city name) who came to the US in 1906 with his family. He escaped the tragic pogroms that were going on in Russia at the time to settle in New Britain. The grandfather became the cantor at the orthodox synagogue in town as well as the Hebrew School teacher. 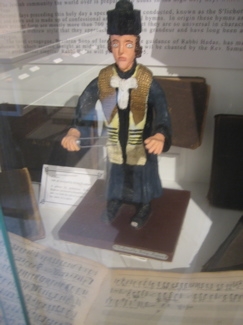 Julius married Rose Kramer, another escapee from Russia – Russian Jews were conscripted back then for 25(!) years and she didn’t want that to happen. Anyway, long story short, the family recognized male singing talent around the Hartford area, put on concerts, developed musical writing schools and stuff. I should probably look up what the heck a cantor is at this point.

There are a bunch of definitions, but the applicable one is: Cantor (church), an ecclesiastical officer leading liturgical music in several branches of the Christian church. Well isn’t that strange… Yes, it is. For a “Hazzan” performs a similar function in a Jewish synagogue. No wonder why I was so confused. Let’s move on to the older stuff. 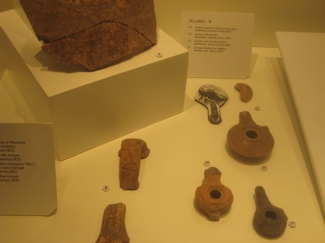 The Sherman Museum has an impressive collection of really, really old artifacts. I shouldn’t have been, but I was surprised at the collection. As mentioned, I don’t know how permanent this stuff is, but portions of the collection are certainly permanent and worth a visit for any budding archaeologist or Jewish scholar… Or person attempting to go to every museum in the state. (If you’re in the last category, seek professional help.)

By the time I got to poking around the small backroom, the student manning the door was joined by another student. This young chap seemed very keen on what that old gray-haired weirdo was doing in the little, infrequently-visited museum taking pictures, so he took it upon himself to watch me. I can’t blame him; there are some priceless artifacts in that back room and I suppose if I were interested in 2,000 year old coinage, this would be a fairly easy place to steal some. (Though I doubt it, as the 3 security cameras above me would do their job.) 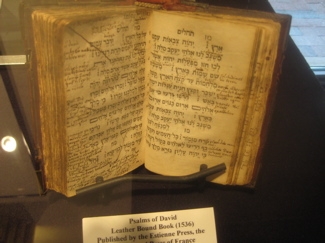 Anyway, that kid started to annoy me; totally spying on me in his own petty little way. This was particularly uncomfortable when I again tell you that this place is very small and it was completely empty other than for myself and this kid. Oh well, let’s hop in the time machine and check out the “Cities of David From Bethsaida to Jerusalem.” These things are artifacts from UHart’s own archaeological excavations in Israel. Wow, I didn’t realize that until right this very moment… That’s pretty darn cool.

Nearly 4,000 years ago, Bethsaida (literally, “the house of the fisherman”) by the north shore of the Sea of Galilee, was one of the first cities that Abraham would have seen as he arrived in ancient Canaan. And this is where it gets very confusing for me. I just went to look up more about Bethsaida and found the Wikipedia page talks about two Bethsaidas and some argument about that, then another page says:

Bethsaida is known as the birthplace of three of the Apostles – Peter, Andrew and Philip. Jesus himself visited Bethsaida and performed several miracles there. (Mark 8:22-26; Luke 9:10)

The name Bethsaida means “house of the hunt” in Hebrew. Identification of Et-Tel with the site mentioned in the New Testament was proposed as early as 1838 by Robinson, but was not accepted by most contemporary researchers; yet excavations conducted since 1987 have confirmed the identification. 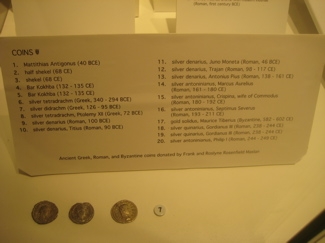 So now it means “house of the hunt.” You wonder why religions can’t get on the same page when no one can agree on straightforward interpretations of the ancient texts! At any rate, let’s get on with it… This place is an old place.

Standing tall in the back of the museum is a Moon God Stele. Me (again being dumb), didn’t know what a stele was, so I just spent a few minutes Googling for a Moon God named Stele. Turns out, a stele is a stone or wooden slab, generally taller than it is wide, erected for funerals or commemorative purposes, most usually decorated with the names and titles of the deceased or living — inscribed, carved in relief, or painted onto the slab.

I just read all about the Moon god from Bethsaida. He was a pretty important god in Mesopotamia. He reigned over darkness and was responsible for the sun to come up in the morning. (This god dates back to the 9th century BCE.) Oh sure, you’re laughing at those silly Moon god worshippers… And I’ll spare pointing out that your beliefs are no different at all. 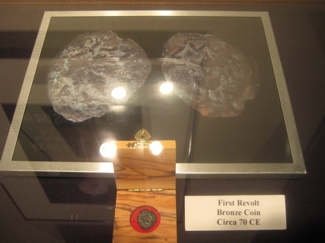 As mentioned, Bethsaida goes back a long way. In fact, the excavations exhibited here showed that it existed some 2,000 years before it was even mentioned in ancient sources. During the Iron Age (1000 BCE to 732 BCE), Bethsaida served as the capital of the kingdom of Geshur.

Later, the area was a fishing village dedicated to some Roman “cult.” Then it was a Bedouin camping ground during the Ottoman empire – which is the period that has been (and is being) excavated. 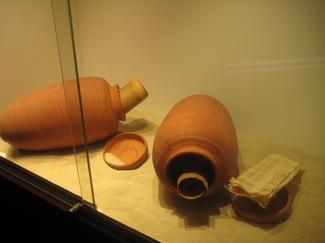 It’s a rather interesting dig as they’ve uncovered many coins, stoneware, clayware and other things from the different periods. Perhaps the most interesting (and least authentic) display here is of the fake Dead Sea Scrolls. Although completely unauthentic (as if the authentic Dead Sea scrolls aren’t without controversy), the display connected me to something tangible that I knew about.

I was happily surprised with this little museum and they’ve done a very good job with it. It is presented in a very professional and scholarly way and UHart can certainly be proud of their Judaic studies department and its museum.

(Inspired a week later, I visited the Jewish Historical Society of Greater Hartford.)