Spurred on to experience more of the Jewish experience after enjoying the Sherman Museum of Jewish Civilization at the University of Hartford, I crossed the street (a week later) and made some time for the Jewish Historical Society of Greater Hartford. This is another of those places that don’t call themselves a museum, but they make a rather impressive effort to look as much like one as a small historical society possibly can. 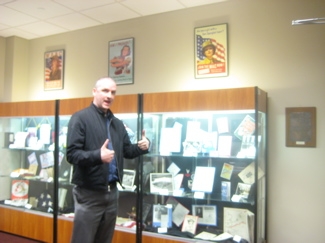 The JHSGH is pretty much an appointment-only place, so I reached out to Estelle Kafer, Executive Director of the joint, and made a lunch date (without the lunch part). It is housed within the rather new Jewish Community Services Building, which is next to the giant JCC building (within which is the Chase Gallery). You have to get buzzed in and then be allowed through yet another set of doors for some reason. I’m sure their reasoning is solid, but it seemed a bit much to me. (Then again, with all the idiots out there with personal vendettas against certain ethnicities and religions, I guess it makes sense.

2019 Update: I imagine there are five more levels of security now. There should be. 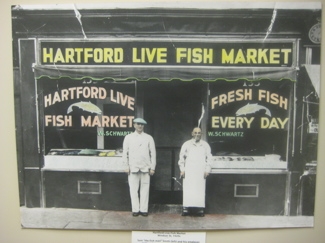 The hallway outside the space occupied by the displays and archives are adorned with some pretty cool retouched (colored) photos of old timey Hartford businesses associated with Jews.

Once inside a third set of locked doors, the JHSGH’s wares unfolded in front of me. Sure it’s small, but as I’ve learned from 156 previous museums, that doesn’t necessarily mean it’s not worth our time.

The Jewish Historical Society of Greater Hartford, a non-profit organization, is dedicated to collecting and preserving historical documents, photographs, and memorabilia of the Jewish community of Greater Hartford. Established in 1971, the Society’s main commitment is to reach the largest audience possible through publications, exhibitions, seminars, and educational programs. 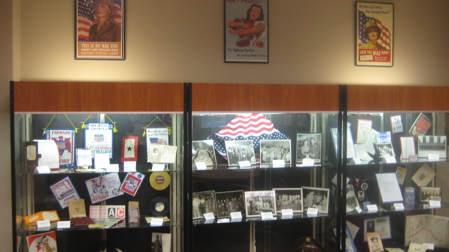 I find this second sentence of their mission statement sort of at odds with their relative inaccessibility, but there are cost issues involved of course – and I understand that. Plus, in addition to the room I was in, they offer sort of “traveling” exhibits for other museums or cultural centers to display. In fact, I think I may have seen one at the Charter Oak Cultural Center in Hartford recently, but Damian didn’t allow me to have a thorough look. 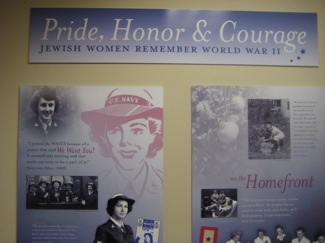 I was warmly greeted by Estelle herself who treated me as an old friend. She spoke quickly and concisely, giving me a nice overview of everything in the room. I just wish she called me a goyim at some point during my (much longer than anticipated) visit. Just to, y’know, make my experience more real somehow. Because let’s face it, I figure I must be one of the goyest goy to ever spend time at the JHSGH. But that’s what I do… so let’s do it!

The exhibit on display during my visit was “Jewish Women of World War II.” While that’s admittedly a rather small category, there’s more than enough there to put together a nice exhibit. It’s interesting to note that just a day or two prior to my visit, Hoang and I independently heard an NPR story about women fighter pilots during WWII – something we had no previous knowledge about. And now here I was learning about Jewish women who actually traveled to Europe to aid the war effort. And a few were from the Hartford region to boot. 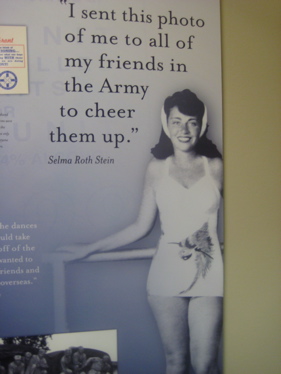 (Of course, another way the women helped the war effort was to send hot pictures of themselves to the boys overseas, like this young woman above. For real. This was an important service.)

Several artifacts were on display – from dogtags with a “J” on them to a women’s uniform to many letters. Rounding out the “women at war” them, the book stacks themselves had a lengthy history of the WAVES. I had no idea who the WAVES were, but now I do. (And yes, obviously several of them were Jewish, and one was from the Hartford region. You see how this works?) 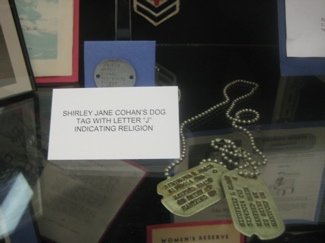 The WAVES were a World War II-era division of the U.S. Navy that consisted entirely of women. The name of this group is an acronym for “Women Accepted for Volunteer Emergency Service” – the word “emergency” implied that the acceptance of women was due to the unusual circumstances of the war and that at the end of the war the women would not be allowed to continue in Navy careers.

The WAVES began in August 1942, when Mildred H. Fover was sworn in as a Naval Reserve Lieutenant Commander, the first female commissioned officer in U.S. Navy history, and the first director of the WAVES. This occurred two months after the WAAC (Women’s Auxiliary Army Corps) was established and Eleanor Roosevelt convinced Congress to authorize a women’s component of the Navy- the WAVES. 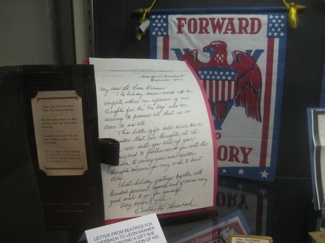 An important distinction between the WAAC and the WAVES was the fact that the WAAC was an “auxiliary” organization, serving with the Army, not in it. From the very beginning, the WAVES were an official part of the Navy, and its members held the same rank and ratings as male personnel. They also received the same pay and were subject to military discipline.

Now, lest you think the women “enjoyed” the same status as men, they didn’t. And blacks were disallowed the first couple years as well.

WAVES could not serve aboard combat ships or aircraft, and initially were restricted to duty in the continental United States. Late in World War II, WAVES were authorized to serve in certain overseas U.S. possessions, and a number were sent to Hawaii. The war ended before any could be sent to other locations. 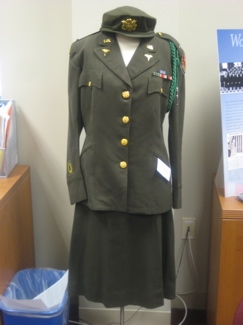 Within their first year the WAVES were 27,000 strong. A large proportion of the WAVES did clerical work but some took positions in the aviation community, Judge Advocate General’s Corps, medical professions, communications, intelligence, storekeeper, science and technology.

So after reading all of that, I somehow think that this picture from the WAVES Wiki page is probably not a real combat situation. Just a guess.

The exhibit went beyond just the women’s contributions to the war effort, as it also had several items and narratives about Jewish participation in the American armed forces. There are letters from Jewish soldiers to their rabbis in Hartford and one particularly cool item is a small 45 record, which contains the voice recording of a soldier sent home to his family. Man, imagine the emotional impact of listening to that in 1940-whatever? 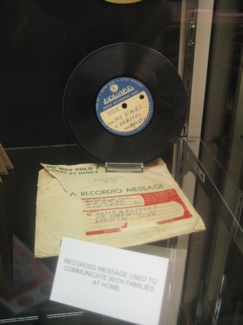 Moving on, the JHSGH has some other war-related things on display like a playbill from “Call Me Mister.” It was a musical written by Hartford native (and Jew!), Harold Rome purely for the entertainment of the soldiers. The whole display was very informative and highlights a part of history that might get overlooked elsewhere. That’s why I love this little focused places.

As mentioned, the society houses thousands of printed archival material. Shelves upon shelves of well-catalogued books and records of Jews in the Hartford region. It’s a very impressive organization they’ve got going. They publish books (I had to laugh with Estelle that the West Hartford Jews book is skinnier than some others for other towns – it should certainly be the biggest!) and a few have sold many copies. They sponsor movies for the Jewish Movie Festival that goes on around here in the Spring every year. They do outreach, they do genealogy and put on a Family Day – this year it’s May 2, 2010. They do trips to Europe and to historically significant places like New York’s lower east side. In short, they do really good stuff for the community and have a good time doing it. 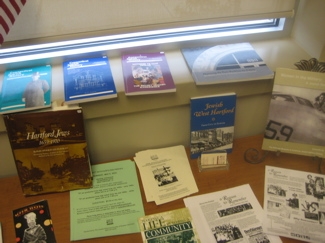 Of course, it goes without saying that the 20th century Jewish experience is not the most enjoyable. But the perseverance of the Jews around the world is an amazing testament to their resilience and faith. The Holocaust rears its impossibly ugly head at every single Jewish history organization in the world. Here, there will be a large exhibit across the parking lot at the JCC all about the Jews of Roth, Germany and their holocaust experiences. Awful – but important – stuff. 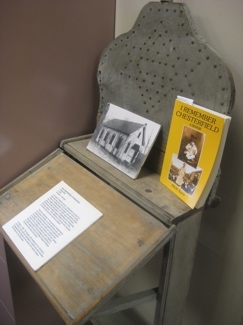 Switching gears a bit, the society has hosted an exhibit in the past all about Sophie Tucker (ne Sophie Kalish Abuza) that followed her career as a Front Street (Hartford) performer through to her conquering of Broadway. That would have been fun to see… I’m sure it’ll come back someday.

There are some other random artifacts scattered (artfully) about the space, like a lectern from the Chesterfield Synagogue, circa 1900. In 1892, this modest one-room synagogue was built to serve the vibrant Russian Jewish community down there (in Montville) for over 50 years.

There is also an almost hidden display explain how the first Jews came to Hartford and built up their community through synagogues and Hebrew Schools. I don’t know why, but it somehow reminds me that my in-laws were the very first Vietnamese family in New Britain back in 1975. Every community has a story. 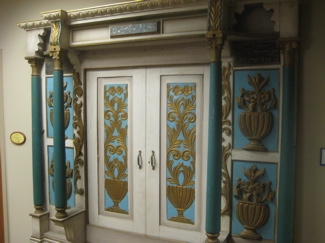 After absorbing everything, Estelle and another woman began talking with me about who I was and what I was doing. The usual… And certainly expected at a place like this. The conversation was pleasant and informative and they seemed excited about my blog and what I’m doing here. It was a nice ego-boost, but I had to get back to work and I bid them adieu. Oh yeah, I must mention that in our 15 minute chat, they did not ask me my favorite or how many I’ve been to! I love those women.

I would urge any Jewish person or anyone interested in the American/Connecticut Jewish experience to spend an afternoon here and at the Sherman Museum at UHart and the Chase Gallery at the JCC. For me, the three offer a unique look into a world unfamiliar to me. To a Jew, I’d imagine the impact would be far more powerful and meaningful.