2015 Update: Construction on Gold Street prompted utilities worker to spraypaint the rocks. Guess they didn’t think/realize this was an art installation. Which is kind of funny. 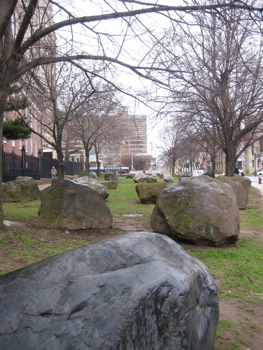 Art. It means different things to different people. Hartford has a rather, um, unique installation right next to the historic “Ancient Burying Grounds” cemetery and across the street from the Wadsworth Atheneum; 36 rocks sitting on the triangularish lawn on Gold Street near Main.

What makes this field of stones interesting enough for me to take a picture of it and write about it is the massive public outcry that greeted its unveiling. Hartford denizens and writers still talk about it; marking anniversaries with biting editorials and sarcastic blurbs.

Carl Andre was (and is) an “important” artist and sculptor. So Hartford apparently had $87,000 to throw around back in 1977 and decided to commission him for an installation. He accepted and Hartford got… Yup, 36 rocks sitting on the triangularish lawn on Gold Street near Main.

Stone Field Sculpture, which was created in 1977, consists of eight rows of boulders in a triangular shape, so that the first row contains one large boulder, and the eighth row eight smaller boulders. The stones are of local rock, and were chosen so that their composition reflects the makeup of rock in the area. For example, there is the same proportion of basalt to gneiss (metamorphic rock) in the sculpture as there is in the Hartford area. The rows of stone are reminiscent of tombstones, a comparison made clear because Hartford’s Ancient Burying Ground is adjacent to the sculpture. 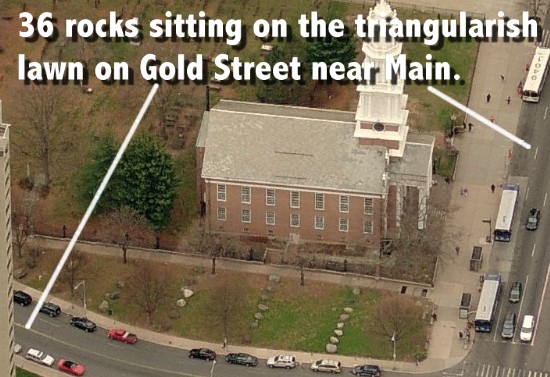 As a major work by an important artist, you would expect Stone Field Sculpture to hold an honoured place in Hartford, but you’d be wrong. The conservative ethic runs deep there, and the work is regarded as something of an embarrassment by many who should know better. Life is like that sometimes – show beauty and meaning in certain ways and it will be missed. If it means you must sit and enjoy it in solitude, the better for you and the worse for them.”

The city even tried to get out of their contract with Andre and not pay him a dime. (This was mostly driven by the popular outcry over the installation.) But once lawyers got involved, the city paid up and there it sits; 36 rocks sitting on the triangularish lawn on Gold Street near Main.