The baby was napping and Damian was contentedly watching a movie. The household chores were done and there was maybe an hour of sunlight left in the early winter day. What to do, what to do? I knew exactly what to do – I’d been thinking about it in my head all day – I’d go “over the mountain” for a quick little hike since the weather was clear and calm. 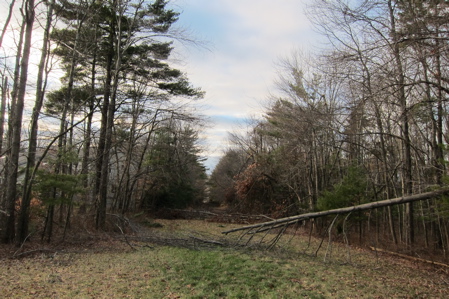 So that’s exactly what I did. I wasn’t expecting much from these couple miles on the western slopes of Avon/Talcott Mountain, but I was curious all the same. I drove to the trailhead on Nod Way just as I did a year prior for my Hazen Park & Skyline Trail hike, only to find the parking situation a little sketchy. I’m sure this is where you’re supposed to park for the whole Skyline/Garvin-Maher Trails, but I don’t know, I just don’t like it. So I went up the mountain a bit into the condo complex and parked in a seemingly harmless spot from which I could see the “grassway” access path through a few feet of woods. I left a note on my dash stating that I’d be back at 4:30 and off I went. 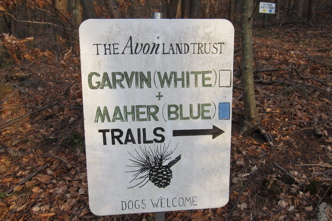 The grassway from Nod Way takes the hiker straight up about a third of the way to the top of the mountain. It looks like a ski run and I’m quite sure that a few of the condo dwellers enjoy using it as such when it snows. Unfortunately, just a couple of months after the Supremo-Destruco Halloween weekend storm of 2011, about 20 trees still block the path up the clear-cut. Although that storm knocked out power to my house for 8 days, I’d sort of forgotten about its effect on my hiking plans. Oh well, I forged ahead, up the hill to the true trailhead. 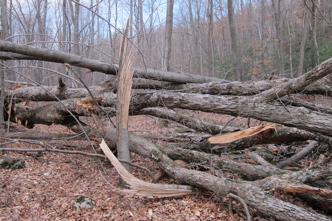 The Avon Land Trust provides nice signage and on their Avon Mountain trails, very nice blazing as well. It’s a little overzealous at times, but not too bad. To the left was the Skyline Trail up to Heublein Tower and to the right is the white-blazed loop path known as the Bob and Sally Garvin Trail. A loop off of this loop is the Ruth Maher Trail and a third loop off of that loop is the red-blazed and unnamed trail that takes you all the way out almost to route 44. I didn’t bother with the red loop, as I hadn’t planned for it and the sun was already setting when I started out. 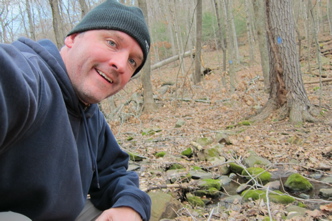 I immediately noticed that the ALT has at least one great volunteer who had already cleared these little-used trails of blowdowns from the October storm. I was hugely impressed! There were some massive oaks and maples across the trails at various points and the trail was thusly re-blazed around these monsters. Sometimes it’s fun to crawl under and through these things, but I do appreciate the option to go around and not get lost. Although really, if you are prone to get lost while circumventing a tree along a trail, you really should just stay home and watch TV. 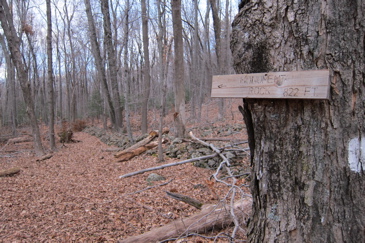 But if you are one prone to do that every weekend, these trails may provide an easy hike to get your blood flowing again. The ALT guide for this trail notes several highlights along the way. Some of these are so absurd that I thought it would be funny to document each spot – but now that I’m writing this, I realize that that’s actually not funny at all. (Some of the “highlights” include a bench, a creek and a stone creek crossing.) 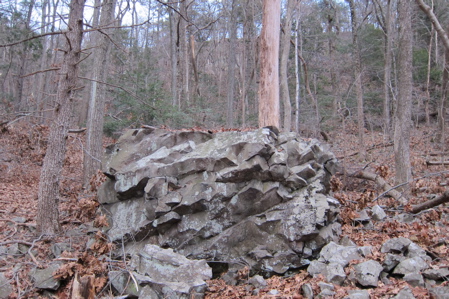 But there ARE some other cool highlights – the coolest of which isn’t exactly along the trail, but I guess it’s easy to find… Even though I didn’t find it. That would be “Tinker’s Midden.” Unfortunately I didn’t know what I was looking for until well after my little hike. Oh well. The following snippets are from Peter Marteka’s 2010 Courant article about this place: 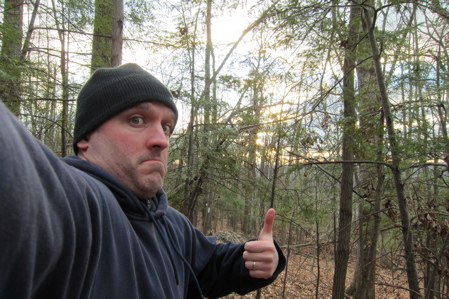 In the shadow of Talcott Mountain sits a place called Tinker’s Midden. According to local lore, it was a place in a hollow along the 13-mile spine of trap rock that runs from Farmington to Simsbury where a tinker worked. And judging by the rusted thingamajigs and thingamabobs in his midden pile, it’s not exactly clear what he did up there.

Tinker’s Midden, also known as “cliff of jars” — possibly from all the broken glass lying about — is one of the many highlights along the Avon Land Trust’s Garvin-Maher Trail at Hunter’s Run… The late Garvins were longtime residents of Avon and shared a love of nature and the conservation of land. Robert Garvin served on the trust’s board of directors in the 1980s. The late Ruth Maher, a teacher, was the editor and writer of the trust’s newsletter.

Along with the old trash dump of tinker metalware, another highlight of the 1.5-mile Garvin Trail is a chunk of basalt known as “monument rock” located at the trail one takes to the midden pile. This huge boulder created by ancient volcanoes is a geological oddity and visitors can trace triangles, squares, octagons and pentagon shapes along its craggy surface. The forest is also filled with stone walls and huge wolf trees that tower over the other vegetation in the forest. 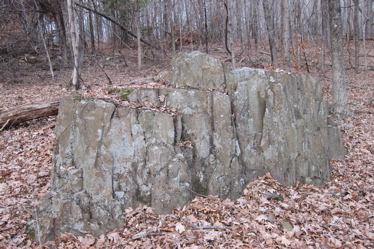 Eh. It’s not such an exciting place, but the Tinker’s Midden thing makes it worthwhile. Here are some guy’s pictures of what he found up there. 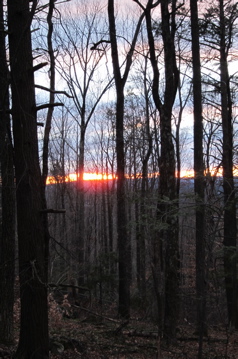