Let me state right up front that I don’t like Florida. There, that was cathartic. Ever since I lived there when I was a little kid, I’ve held a grudge against the state for various reasons – the weather, the cheesiness, the Disneyfication, the destruction of the Everglades, going to school in a trailer, its politics… You name it, I probably don’t like it in Florida. That said, I was still excited to go on a little vacation to Orlando with my in-laws (mother, father, sister, brother, other brother and his wife with our niece and nephew). 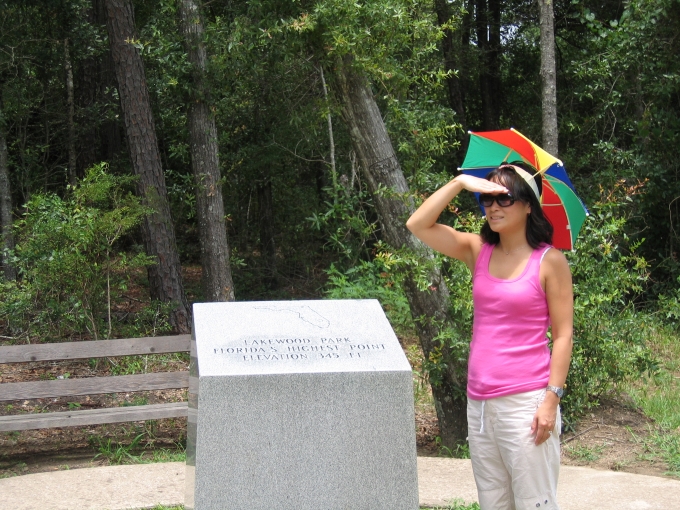 Now, I’d be lying if I said that Orlando in July would be my first choice for the family gathering, but hey, I’m not going to complain. Especially since the house we were staying in had a nice shaded pool and a rather impressive air conditioning unit – which had us shivering at times despite the sauna-like heat outside. 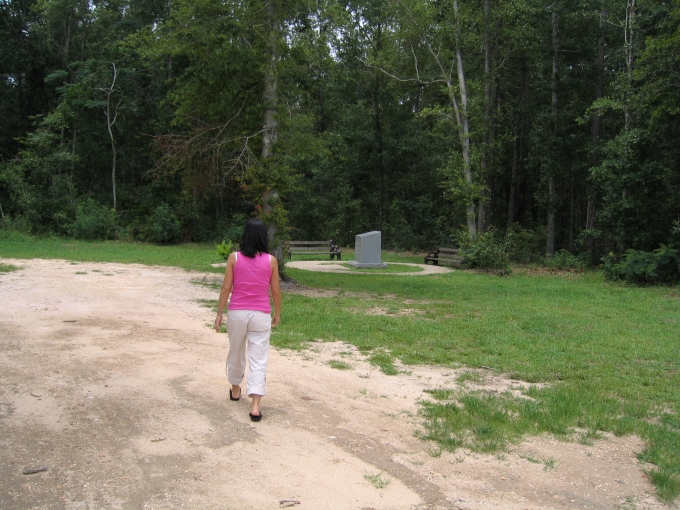 The day prior to the highpoint expedition was spent at Disney’s Epcot Center. Staying true to my blog ethos, I won’t delve too much into that debacle other than to say, Epcot is not for me. I did have fun however, because I was with Hoang, her brother, and her sister, but the park itself is a ridiculously expensive shopping mall with no real rides open and chock-full of insulting caricatures of other cultures.

The day after the highpoint, we went to Disney’s Animal Kingdom which we felt was decidedly more interesting and fun. It still had its faults, of course, not the least of which was the tram operator who proudly announced that the new fake mountain under construction there would be the “highest mountain in Florida when completed at just over 200 feet.” In fact, the Disney press release states the same thing: “Expedition EVEREST will be located in the Asia section of the theme park. At nearly 200 feet high, it will be the tallest mountain in Florida.”

Update: At some point after I wrote the above, the wording was changed to read, “…The highest peak in Disney’s Florida mountain range.” I’d like to take credit for that, thanks. 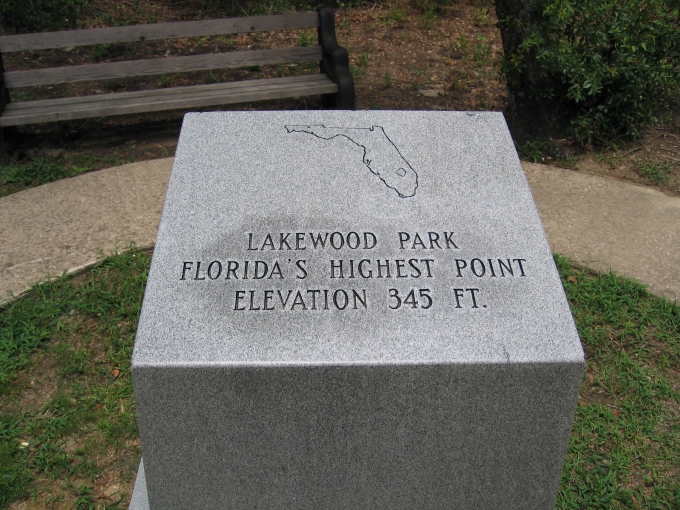 Ok, I suppose it depends on your definition of “mountain” but Florida’s highest point rises up to the lung-searing height of 345 feet. While on the tram hearing the erroneous information the day after summitting the Sunshine State, I came very close to standing up and shouting out the truth! Britton Hill will not be ignored!

Enough about the days before and after our highpointing adventure. The day of began bright and early, around 7 AM – well before anyone else was stirring in the house. I tended to think this was a good thing, because trying to explain just what it was we were doing to my tired in-laws may not have gone so smoothly. Hoang had told them that we’d be taking a daylong “road trip out to near Pensacola” and that seemed to suffice. 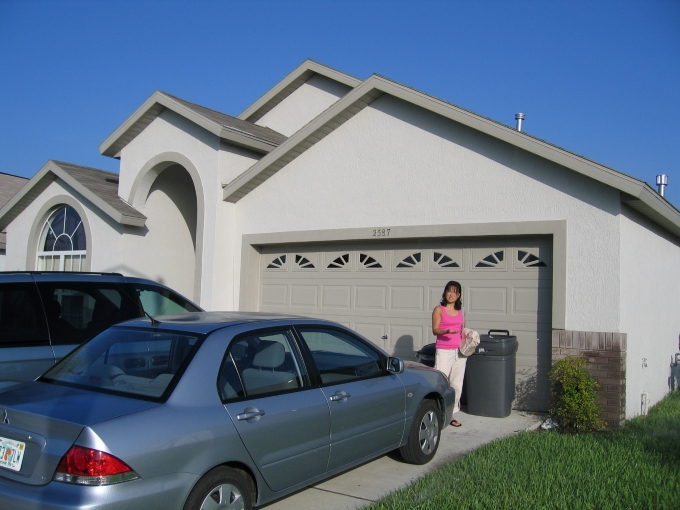 The less they know about where I drag their poor daughter/sister for highpointing reasons, the better. I often wonder what her mom would think if she ever saw the Katahdin pictures and understood the scope of a hike like that.

Hoang quickly showered (because one must be squeaky clean for an all day car ride) and we were on our way in the rental car. It was only 8AM, but it was still pushing 90-degrees and already humid. I tried my first “sell” on Hoang: “Hey, at least you’ll be in air conditioning all day, rather than walking around another outdoor theme park!” I think it actually worked a little bit, what with the prior day’s 6 hours of walking in the central Florida heat. As this was Hoang’s first (and only) highpoint trek while pregnant, spending long days in comfortable cars was apparently preferable to walking around in the sun. (Oh yeah, she was pregnant here.) And yes, ladies, I was hyper-conscious of Hoang’s possible need for frequent rest stops… Annoyingly so. I nudged her every time we neared a rest stop to ask if she needed to go. I’m good like that. 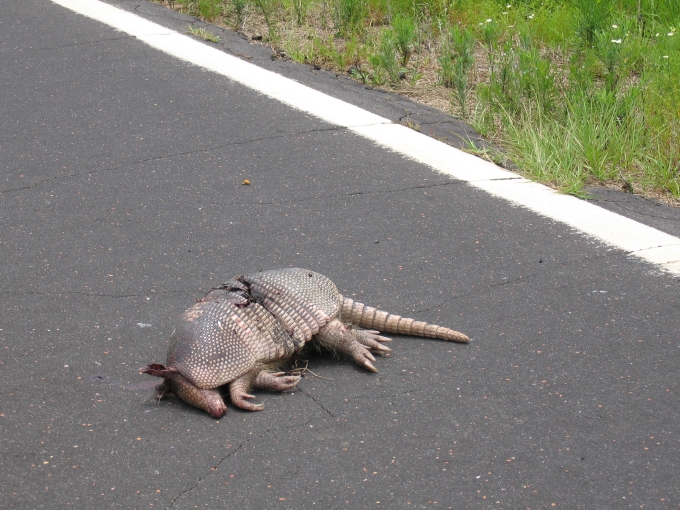 Totally worth stopping for

Since there was to be no actual hiking during this highpoint trip, I need to resort to describing the drive. Especially since in some ways, a 12-hour drive could be worse than a day hike. Fortunately, the weather started out clear and we didn’t expect any serious traffic. What I did expect was a good cup of coffee to get me going.

I drove out of the maze of identical rental houses (miles and miles of them – and as we’d see later, many more miles and miles of them yet) and onto the endless business strip with never-ending traffic lights, chain restaurants, and gas stations. In most parts of the civilized United States, one can grab a good cup of joe at any number of places around town. Not in Kissimmee, Florida however. We drove west for many miles looking for a Starbucks or coffee shack or anything that would suffice. Nothing! How would a Seattle hipster survive down there? I settled on a McDonald’s medium cup of nasty brown water which was horrible, to say the least. 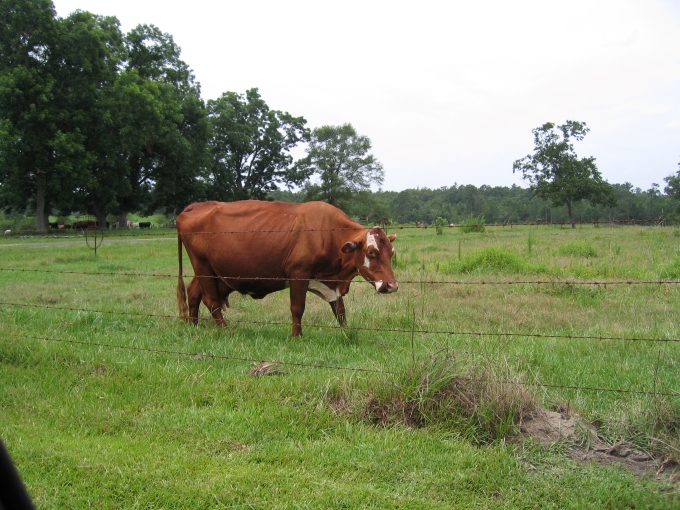 The plan was to drive north on I-75, then west on I-10 out to the Florida panhandle and the exciting highpoint itself. All told, this was an 840-mile round trip – with nothing interesting in between. With thoughts solely focused on the goal, neither of us noticed much of anything on the way out there. We stopped for gas someplace, drove through Ocala, Gainesville, and Tallahassee – boy Tallahassee is pretty far removed from the rest of the state. Though, I bet one could find a decent cup of coffee in that college/capital city at least.

Before we knew it – okay, that’s a lie – Six hours from the outset we arrived at the exit at some western Florida town named DeFuniak Springs. There was a “Historical District” and a bunch of Victorian homes. In fact, it felt like we were back up north, perhaps in a bucolic New Hampshire town. So we turned off the AC, rolled down the windows, and thought about warm cider. What a chill! It was several degrees cooler up there – perhaps maybe 94 or 95 degrees! We wound our way through town and up north further still, heading towards the Alabama border.

Back when we highpointed Cheaha Mountain in Alabama, I promised Hoang that I’d never force her to go to Alabama again. The directions we had to the Florida highpoint, however, clearly stated we were to drive north a mile or two into that state, then head south again back into Florida. Uh-oh, would I be able to distract Hoang enough to get away with it? 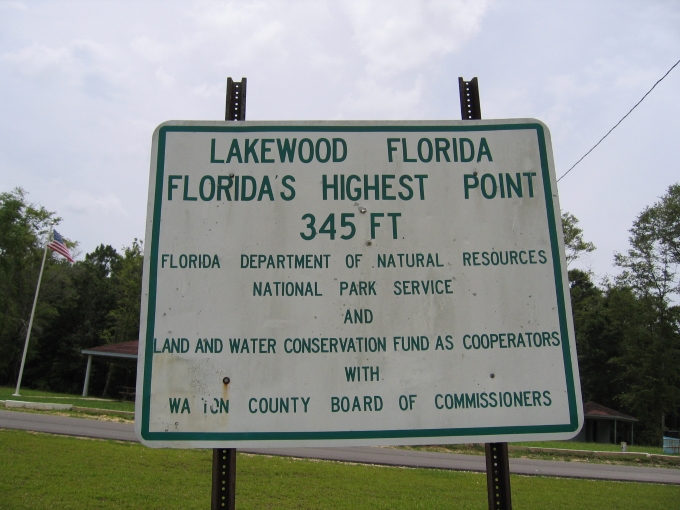 Fortunately, I didn’t have to as on our way, I noticed a sign pointing an alternate route to Britton Hill – one that would not necessitate crossing state borders. I took the right hand turn and began to feel the excitement of the impending summit. As we neared our goal, we drove through some cow fields – but not just any cow fields. Each cow had a little white buddy. I’ve come to learn they were cattle egrets and while I guess they’re prevalent all over the south, we had never seen them before – so we stopped and stared at them for several minutes. (Trust me, after that drive, this constituted something interesting.) When we tried to get close to a cow, the birds flew away. 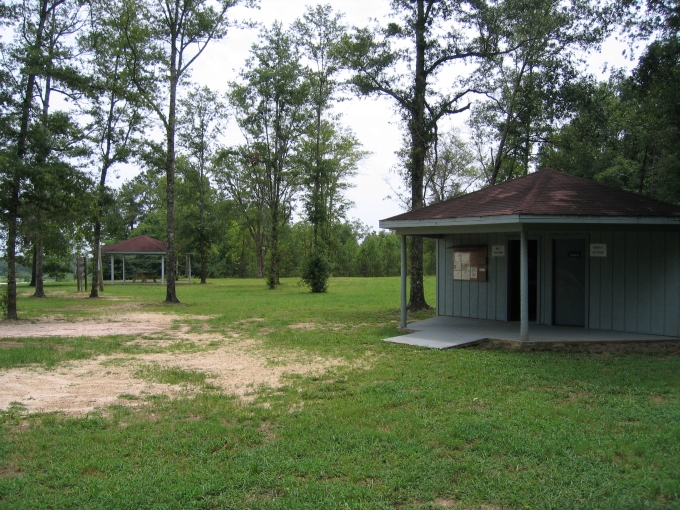 About a minute north of the cows and their friends, I nearly sped past the parking area for Lakewood Park. I slammed the brakes, made a hard left, parked the car, and realized that we were there! Highpointing sure has its fair share of anti-climatic moments; don’t let my scintillating reports convince you otherwise.

Hoang and I looked at each other, looked out the windshield to the stone monument, then looked at each other again and shrugged our shoulders. We stepped out into the humid air and “hiked” on up to the top of Florida. I will certainly give the state credit for acknowledging their highest point; road signs from several miles away, a stone monument in a well kept county park, a picnic area, bathrooms, and even a tiny little “resting bench” for children and very short people who become winded walking the 8 seconds to the highpoint. And don’t forget the view: 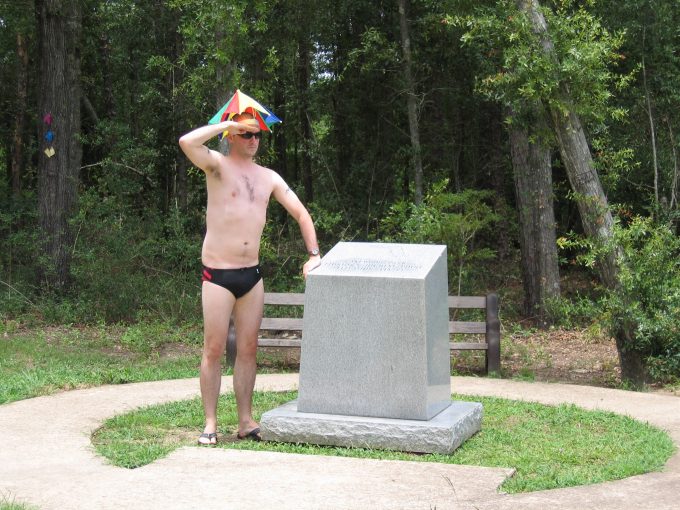 We were pretty isolated up there, so we had a little fun with the pictures as you can see. There was actually a bit of a view to the east of pastureland and some trees. The constant “whrrrr” of crickets filled the air as we quickly looked around the little park. I snapped a bunch of pictures and as quickly as we arrived, we began the long slog back west and south. 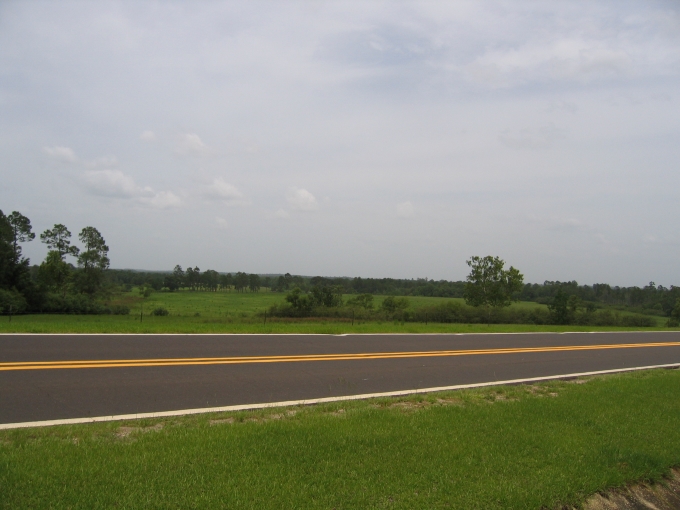 The real view from the summit

I was far more observant on the trek back, as we were treated to the first armadillo either of us had ever seen (albeit dead and being eaten by turkey vultures). Other highlights included a restaurant called, “PoPeople Restaurant,” the Suwanee River, the Family Dollar Warehouse store (when Family Dollar is too expensive), and countless anti-abortion and pro-God billboards. Because really, if you’re God, what better way to get your name out there than on billboards along Interstate 10 in western Florida? 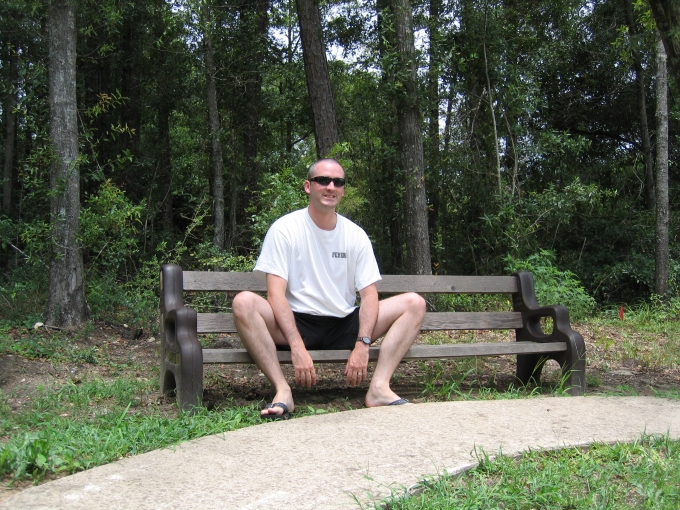 We did make two stops – one for lunch and one for a watermelon. Before the interstate in Paxton, FL we came upon a roadside farm stand selling fruits and veggies from the field just yonder. It was all very “old south” and quaint, so we decided to bring the family a nice and fresh watermelon. The thing cost a fraction of what we’re used to paying in Connecticut, and it was ten times better as well. 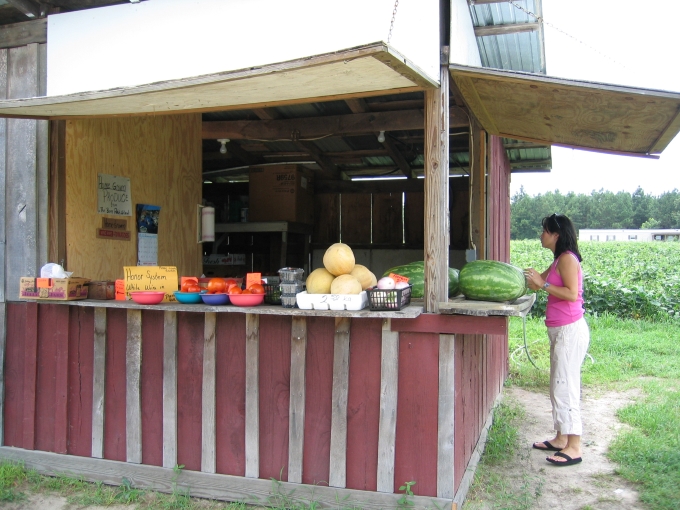 Aside from the highpoint itself, the most interesting thing we saw all day was the following truck parked (permanently) alongside the road. Ok, an ad for a nude male revue joint, no big deal. However, as you see below, the other side of the truck completely creeped us out. I’ll let you form your own opinions – because after all, I’m not advertising exec. Perhaps stuff like this necessitates the need for God to advertise down here. 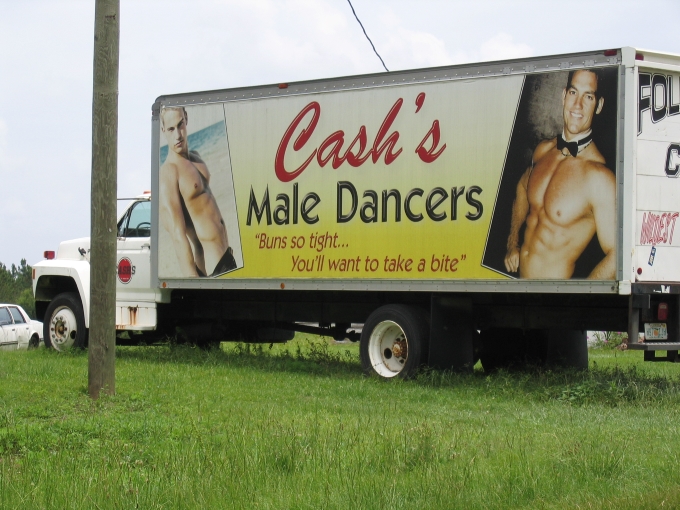 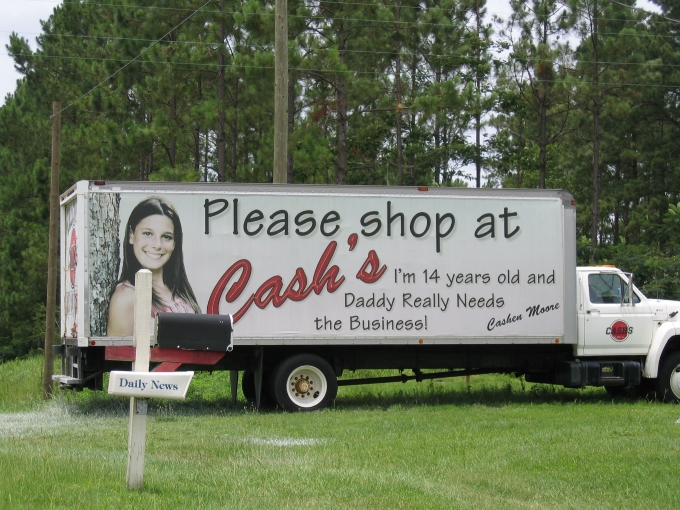 Overall, the 6-hour drive back to the Orlando area was as boring as the drive out. We did hit one severe thunderstorm but as my memory told me, that happens every single day in central Florida. We arrived at the house right at 8PM while the family was out at dinner. Starving, we scavenged for food and tore open the watermelon. When the others returned, no one seemed too interested in our 12-hour trip to nowhere. Secretly, I’m convinced Hoang has told them it’s best not to ask and they all leave it at that. Thank goodness.

Addendum: The clouds we experienced at the top of Florida were the outer bands of Hurricane Dennis, which battered Britton Hill a day or so after our visit. 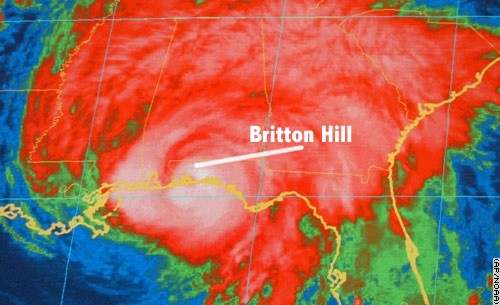